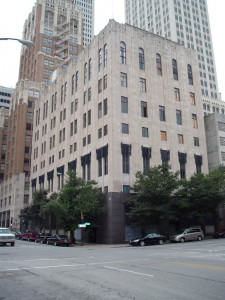 This is the Tulsa Club Then. 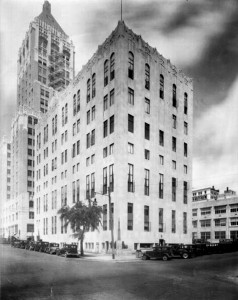 Undated photograph*, presumably from the 1920’s or 30’s. Any car folks out there who can date the cars parked? What interests me about this photograph is that the distinctive black tile work now on the building was not present in the earlier photograph. It’s a mystery to me. Its not just the tiles, there appears to be a narrow addition or facade to the entire front of the building. 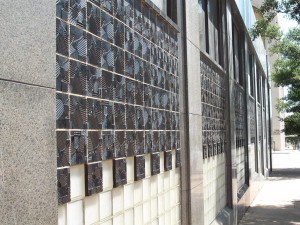 Above is a closeup of the tiles, below is a detail. I have studied them and I confess I think the design is totally abstract. 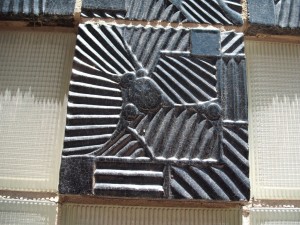 The new facade detracts from the clean lines of the original building, but maybe contributed to a more modern look. I could find no information at all about the addition.

In its heyday the club was a place for the elite to meet and party.* 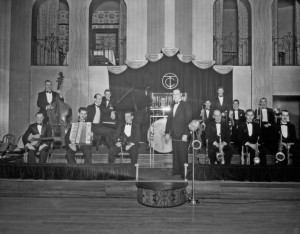 Unfortunately, the building is not well preserved. The Tulsa Club folded in the early 1990’s. The building was gutted for its fixtures and then sold to somebody in California, who apparently didn’t do anything with it, including pay the annual assessments. The interior was badly damaged by vandals and squatters. The City is trying to foreclose and the owner is trying sell the building according to this article. The MODERNtulsa blog has a post with recent photographs of the interior. The photographs are hard to look at.

The future of this building concerns me.

For other views of the world we live in check out That’s My World.

*The black and white photographs are courtesy of the Beryl Ford Collection/Rotary Club of Tulsa, Tulsa City-County Library and Tulsa Historical Society.

The Midcontinent Tower in downtown Tulsa at 37 stories is one of the tallest buildings in town. What most people don’t know is that it is actually two buildings. One built in 1918, the other built in 1984 and they don’t touch other. 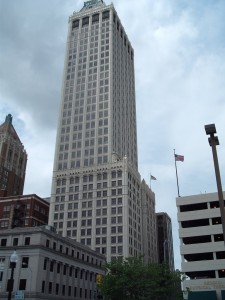 The two buildings are free standing, each with their own foundations. The older building is concrete, the newer building has a steel framework.

As with most of the significant buildings in Tulsa the security guys will encourage you to wander around the public areas and take pictures to your heart’s content. The guard in this building had a four page handout he gave me. He said lots of people from all over the country come in to look around. 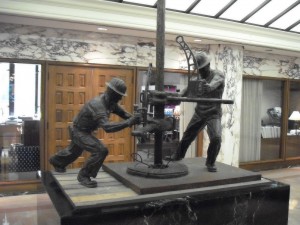 The lobby is very ornate with different types of marble on the walls and the floor and the striking sculpture above. 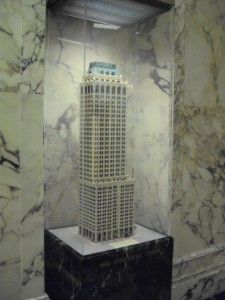 The exterior is very nice. The tower required 85,000 pieces of terra cotta. You can hardly tell the old building from the new building. The 1984 expansion was done very nicely. 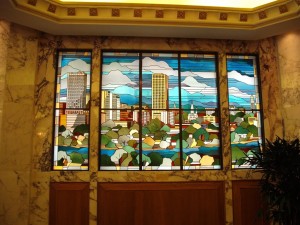 The lobby has two stained glass panels showing a panoramic view of the Tulsa Skyline. 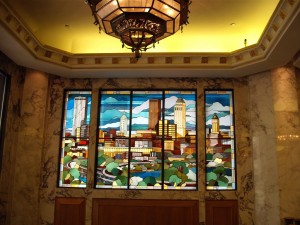 Below is one of two paintings hanging in the lobby by one of my favorite western artists,Wilson Hurley. Mr Hurley died in 2008 at 84 years old. I got to say hello to him a couple years before that when he was touching up a painting of his that hangs in the lobby of the building where I work. 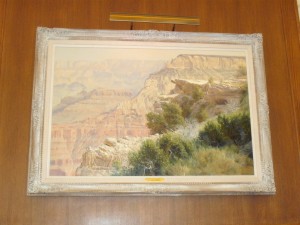 In the basement is an example of the steel work that went into the tower. I find this kind of stuff fun. 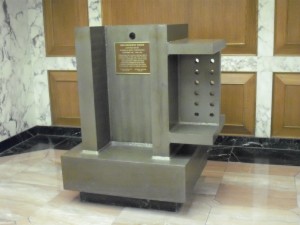 The building is immaculate and they welcome visitors. If you find yourself in downtown Tulsa with a few spare minutes wander in and look at it.
For other photographs and information from just about everywhere check out My World.

When Tulsa residents think about architecture they think about the art deco buildings downtown. These buildings have been documented well and many of them are well taken care of by their owners.

Just south of downtown are several modern buildings that are interesting either visually or historically. I went past several during a noon run last week. 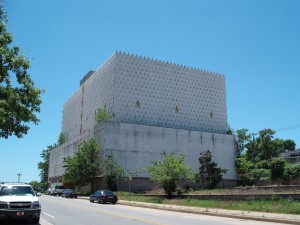 First up is the Abundunt Life Building on South Boulder. It was built in 1957 by the Oral Roberts Ministries who occupied it until they moved to south Tulsa. There are all sorts of wild stories about the building during the Oral Roberts ownership. Since I don’t repeat rumors, you will have to read them yourself here. The building has been empty since the 1980’s. The city is after the present owner to bring into compliance with code. 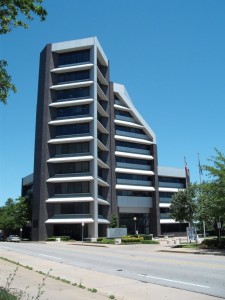 Above is the “new” Mapco Building, below is the “old” Mapco building. Mapco was a natural gas liquid pipeline company that was purchased by Williams in 1997. I tried to do some research on the internet but was not able to find out when the buildings were built or who architect were.

The new building is very bold in design, but cool and corporate. The old building is warmer and humane but has two interesting features to me. One is the large flag that always flies over the building . The building overlooks Veteran’s Park which is the prime fireworks viewing spots on July 4. The flag always looks great with the fireworks.

The second feature is the cool little individual shades over the windows. It makes for interesting shadows during certain times of the day.

The new building has shades over the windows also. It can get hot in Oklahoma in the summer. 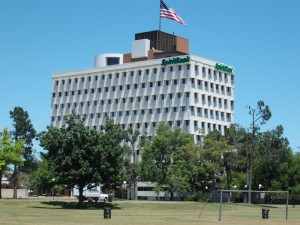 Below is an apartment building on my running route. I guess that you could call this modern in design. It looks better in the picture than it does in real life. It looks like it is made of reinforced concrete. It might stand up well in a tornado. Note the overhands at each level which could function to shade the windows. 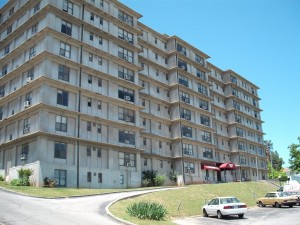 Below is a more attractive modern apartment building. It is a Tulsa landmark and overlooks the river. 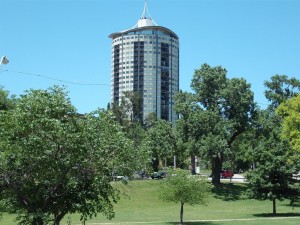 Below is the former Getty Oil building. This building has really grown on my over the years. The exterior lookss like it is a lattice. I never really noticed it before. 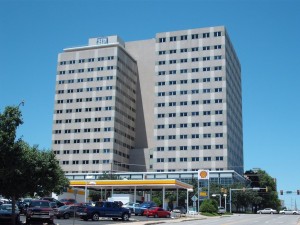 Below is the Blue Cross Blue Shield building. Again, it has overhangs that can shade the windows during the heat of the day. 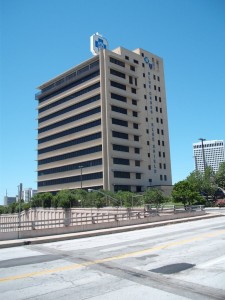 That’s about it. What struck me about researching the more modern buildings compared to older buildings is the paucity of information about architects, builders, etc. Just like everything else we won’t appreciate many modern buildings until after they are are gone.

ModernTulsa is a web site and blog that is very useful in learning about modern buildings.

Check out My World for more photographs of our world, from all ove.