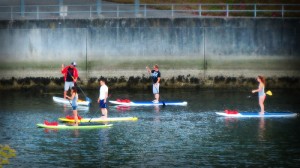 We saw a lot of great stuff on our family vacation to Seattle last summer. We were at the Ballard Locks checking things out when a group of Standup Paddleboarders came cruising by. They made it looked very easy.

I was in downtown Oklahoma City for a conference. I was staying downtown so it was easy during breaks to walk east across the railroad tracks to a funky old commercial industrial area called Bricktown, former home of warehouses, machine shops, and factories and now thoroughly gentrified into restaurants, stores, hotels, and condos. 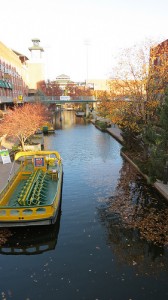 The City has also built a canal that winds through the area. It is a really nice and peaceful place to walk. 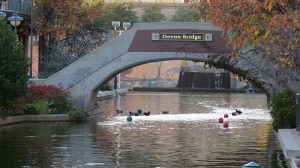 It is not near the scale of San Antonio’s Riverwalk but last time I was in San Antonio it was funny how the locals there felt defensive about the Oklahoma City’s canal. “Well, its not near as nice as ours.” Of course not, Oklahoma City’s version is still great though, and a lot less crowded. 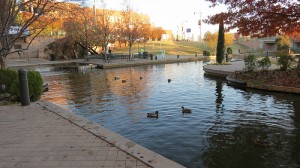 Its a great place to take a camera. Better take some duck food also. They don’t care about cameras. 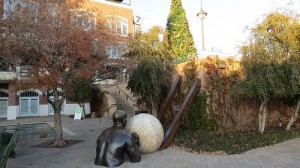 Especially in the magic hour of the evening in between quitting time and happy hour. 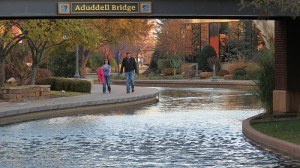 At the far east end near the Bass Pro there is a Centennial Display celebrating the Oklahoma Land Run. 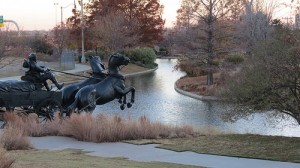 I’m not sure if the horses can jump that canal. 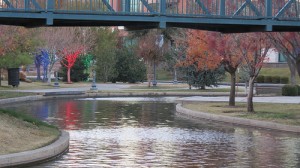 The light is dimming, time to head back, 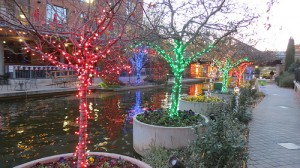 The Christmas Lights made for a nice walk.