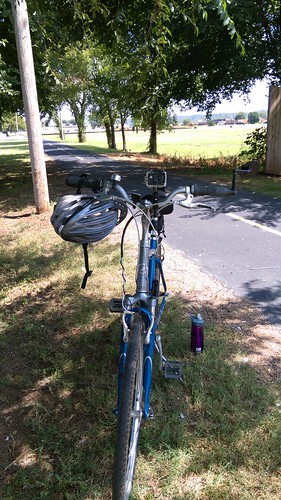 I was on my own Saturday afternoon. Heather is in Dallas with other fitness instructors learning all sorts of stuff and son Logan at rehearsal as has a small part in musical based on Romeo Juliet (more to come later on that) so I thought what the heck I will ride my bike over the recently reopened bridge linking the Tulsa bike trails with those of Sand Springs. Also, I wanted to use my GoPro camera clone. An SJ4000 that I’ve had over a year and half and hadn’t used much. See it mounted on the handlebars of my bike. 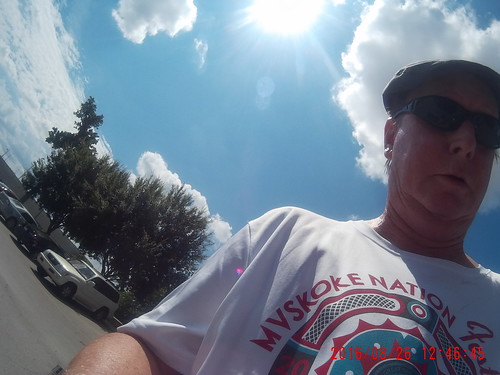 Here I am adjusting it. 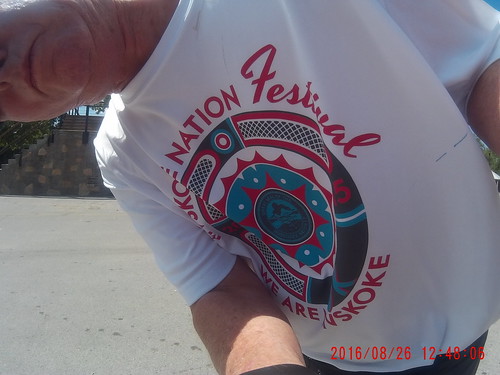 Us guys know that looking at something sideways always helps with whatever you are doing. 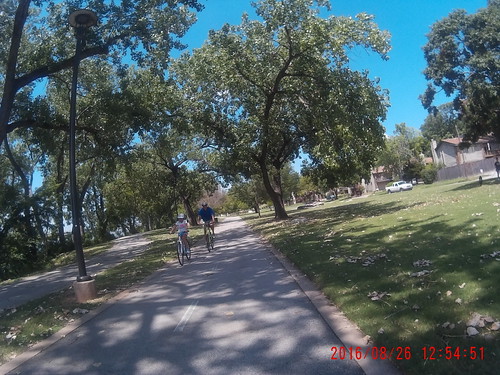 I finally got it going. It can take video continuously or it can take photos when you hit the button or it can take pics at set intervals. I had it set to take pics every 20 seconds. Once you get it started it just keeps on going. 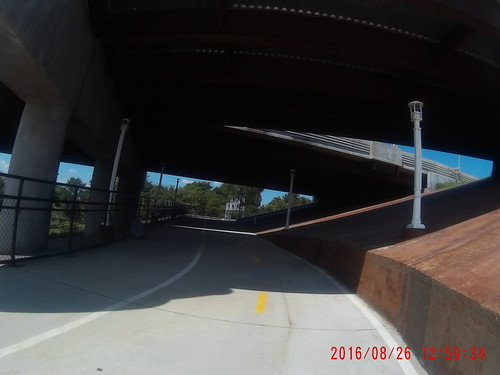 So I got to the north end of the of the Riverparks trails and went under the freeway via the new underpass headed to the reopened pedestrian bridge over the railroad tracks. The bridge has been closed for several years it seems. 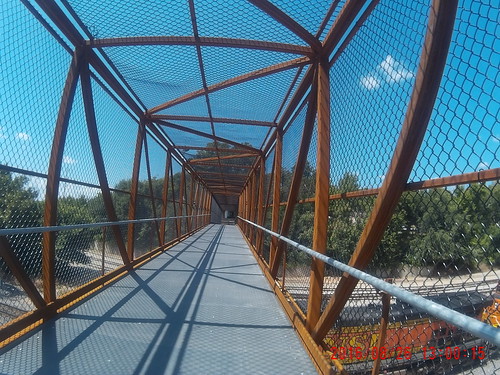 And here is the bridge, just as narrow as I remembered it. The approach from the south is a lot better with more room but the exit at the far end is still a blind turn and very sharp. Oh well. As a bonus a train was going under just as I passed over. Have I ever told you that I love trains. I do. 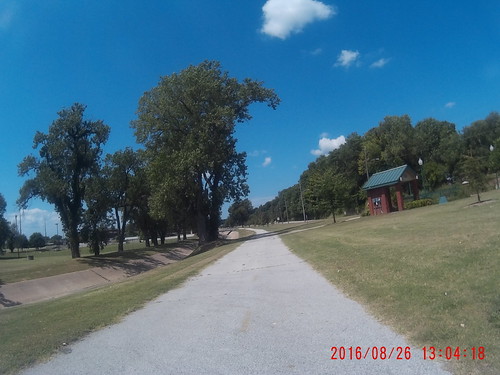 And then across the bridge and then along Charles Page Boulevard to Sand Springs. 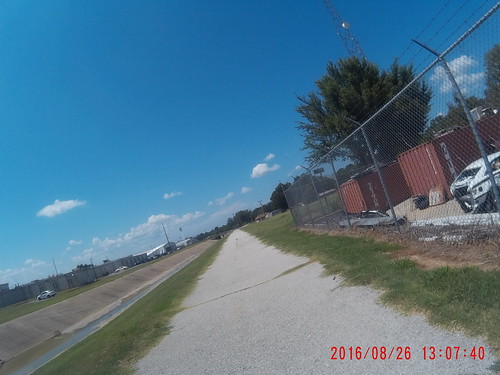 Past the Tulsa Police Department garage. Lots of wrecked police cars there. Makes me think of the guys who keep us safe. I am totally behind Black Lives Matter but am also totally behind Police Lives Matter also. Shoot, everybody’s life matters. You may notice the photo is tilted. The bicycle mounts that come with the the SJ4000 are not very robust. I might have to invest in something better. They lose position with the jostling and vibration of the ride. 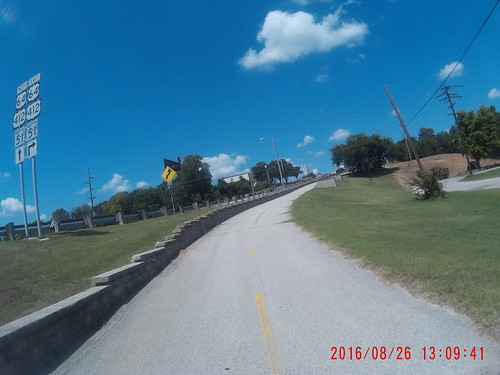 Oops, I used to ride this route a lot years ago when the bridge was last open. I forgot about the steep climb from the Arkansas River Bottom up the hill. I didn’t have to walk the bike. 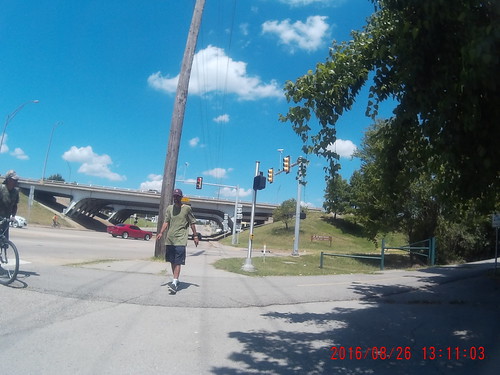 At the top though there were two other bikes and this walker all hit the intersection at the same time so we all turned into walkers. They guy walking said, “What a ***** traffic jam you guys have going on, in a good natured manner. I turned to the left. Going to the right heads you back to Tulsa and you go past back side of the jail and then by the Day Center for the Homeless. Years ago, I took that route and a couple drunk guys outside the Homeless Center were cheering me on: “Go Lance Go!!!” they yelled and pumping their arms.  That was kind of the highlight of my athletic career. I went by there a couple of other times and they weren’t there. You know, fans are fickle. Just ask Lance. 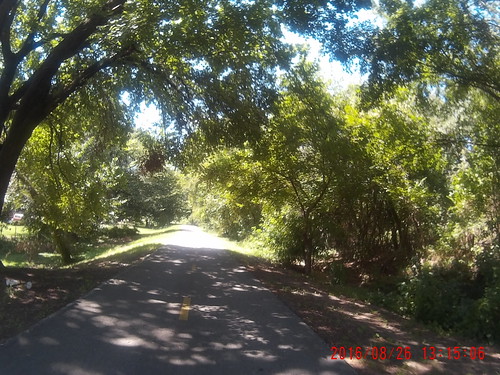 Hanging a left, the trail is an old railroad bed. So it is flat and shaded in a few places. 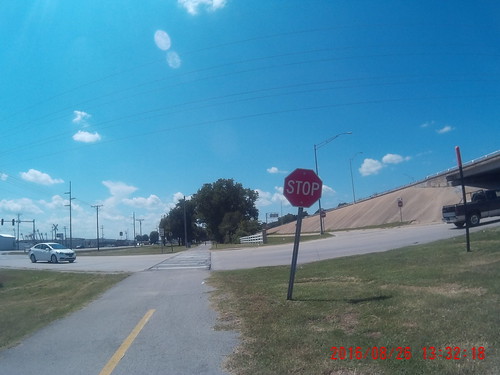 You have a few roads to be concerned about. 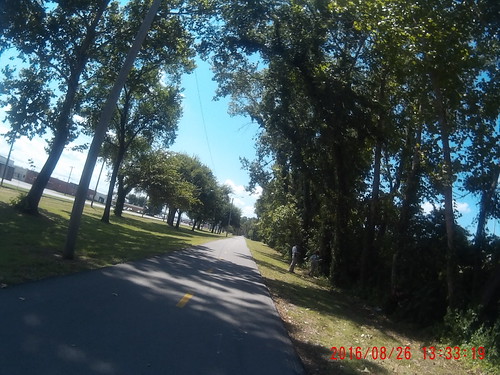 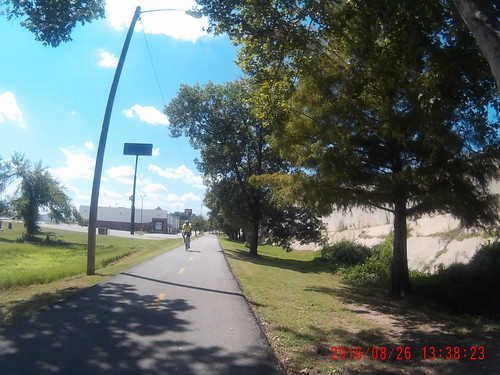 I met a few bikers coming back at me. 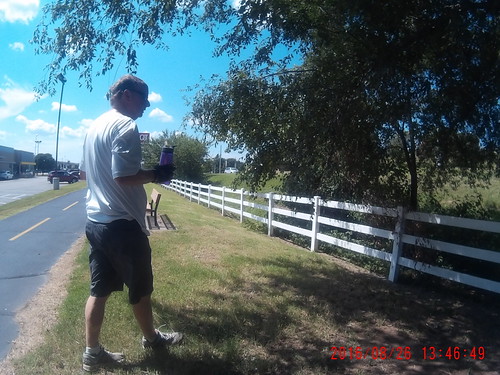 I had a three hour window and so my plan was to turn around after an hour. Give me an hour leeway in case something went wrong. With Heather out of town and having to pick Logan up at a set time after rehearsal I was a little nervous. So here is the one hour point where I stopped the bike and took a little water break. Oh, and don’t worry I wore a helmet. I just took it off during my break. 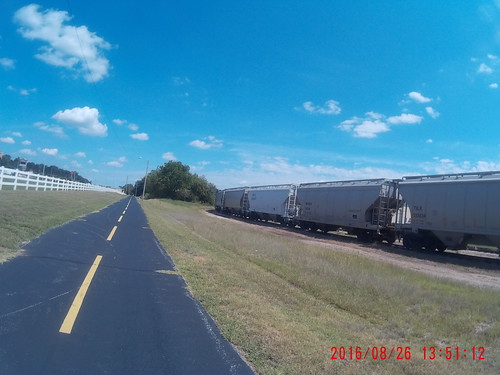 So then I headed back and pretty soon the bike was like bonk, bonk, bonk, It is like what? Well the front tire had a little hernia. So I said well, I’ll just ride it until it quits. And then I thought that last time I had a blowout it was on the back tire and I almost lost control. Not good on the front tire. So I got off the bike and walked it and sure enough, POW!!! and it was all over. So, now what?? Hmm, my plan was to stash the bike and get an Uber or a taxi back to my car. 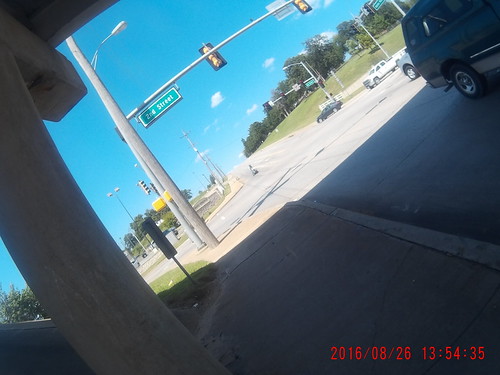 I didn’t see a good place to stash the bike on the trail so I went under a freeway overpass. 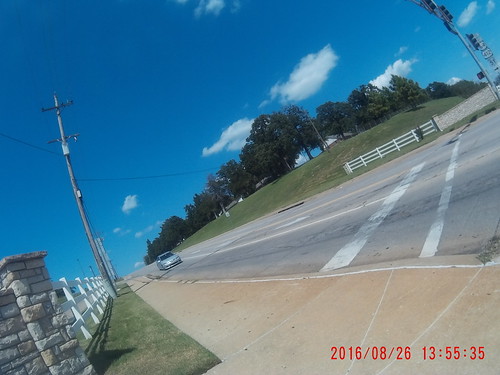 So see that white fence leading to a concrete wall? I walked the bike and put it up against the wall. Hidden from traffic and no sidewalks or anything. Best I could do. 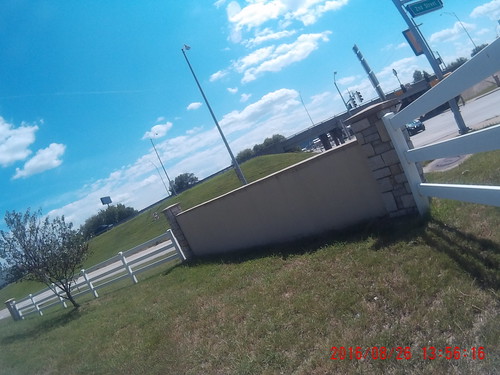 Yep, that is the spot. I didn’t lay it down, I leaned it up so it was all shadowed. I was a little nervous. Then I went across the street  to the Taco Bueno, found out that there were no Ubers available so I called Yellow Taxi. About 15 minutes later, Enrico showed up in the Taxi  and took me back to my car. I drove my car back out to the Taco Bueno and my bike was still there. So I loaded it up and went to pick up the kid with 15 minutes to spare.

Pretty amazing I think. Just think how different things are now compared to when we didn’t have cell phones and apps and all that.

Anyway, it was a lot of fun. My camera, with its 20 second timer, took 240 photos and I cut them down to about 30. Digital is a lot more convenient and cheaper than film. Maybe next time I’ll cu cut the interval down to five seconds. The camera is pretty noticeable and I had a couple of pretty female bicyclists smile and wave at it as they went by (surely they weren’t smiling and waving at me!). I passed a couple geocachers looking for a cache. And lots of other people. None of them showed up on the camera.

So, all in all, not a bad day it turned out. I got to visit an area of town I hadn’t seen in a long time, check out my camera, and was able to bail myself out of a situation.

4 thoughts on “Bike Ride to Sand Springs and a Blowout”