We had a protest going here in Tulsa early this week. 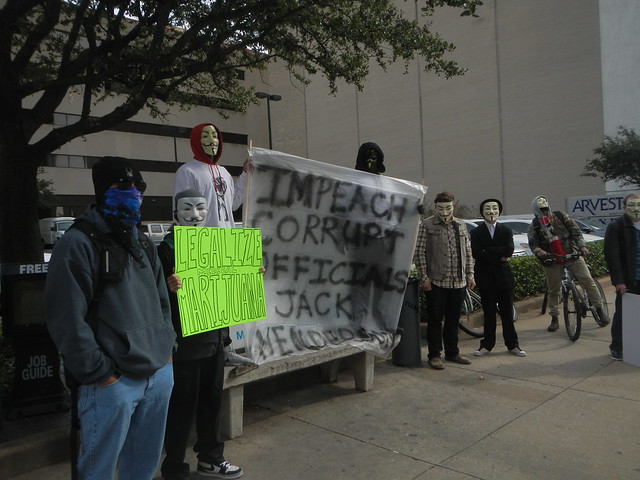 We had these guys on a street corner in downtown Tulsa. I asked them what the deal is and they said that the individual named on the sheet was guilty of embezzlement. He’s a city counselor and I googled him and could find no mention of anything remotely illegal or unethical or anything else.

Couple that with a slogan written on a white board at work in a seldom used conference room:

We are Legion. We do not forgive.

We do not forget.

So this intrigued me. The slogan and the Guy Fawkes masks are associated with a group called Anonymous. They are called Hacktivists because they use the internet as an alternate form of protest.

November fifth, the day I took the pic was the day of the Million Mask March when all the members were supposed to get their masks on and go public. Ironically it was the day after the elections here in the USA and I wonder how many of these guys bothered to vote.

Sorry dudes, I think your anonymous protest accusing without any substantiation somebody with embezzlement is total crap. I guess that you have the right to stand on a corner with your bedsheet sign but do you really want people to take you seriously? And writing kind of halfway threatening  messages on whiteboards? Creepy! It reminds me of people who put religious tracts in the stalls of restrooms.

So what do you think? Do you know any hacktivists? Are you a hacktivist?