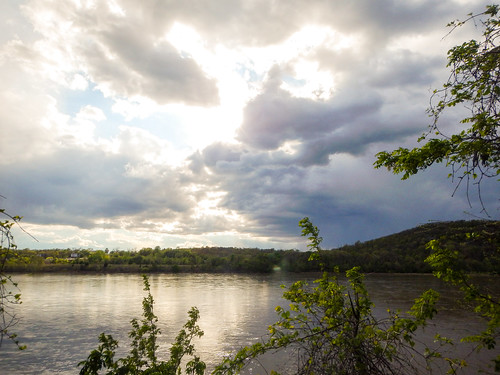 One day after work when I was on the east bank of the Arkansas River looking across trying to figure out whether to run on Turkey Mountain or not which is the hill to the right. I decided to go ahead and stayed dry for the most part. I really look forward to my Wednesday night runs on the mountain or the river and rarely cancel them. I always feel like a kid when school has let out especially when the weather is decent. I hardly ever see anybody else especially when I’m more than a quarter mile from the parking lot. 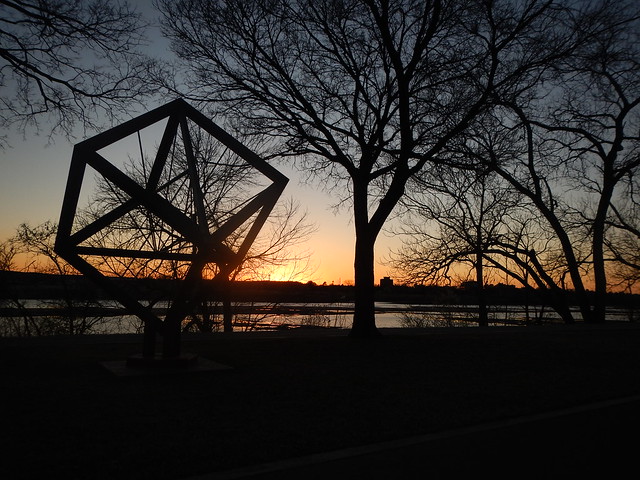 Those who follow me know that one of my joys is my weekly run after work on the Tulsa River Parks Trails along the Arkansas River. I run the trails almost regardless of the weather. Lightning  and Ice are the only reasons I have not run the trails. And this time of year by the time I get changed and dressed and then out to the river the sun is about to set. 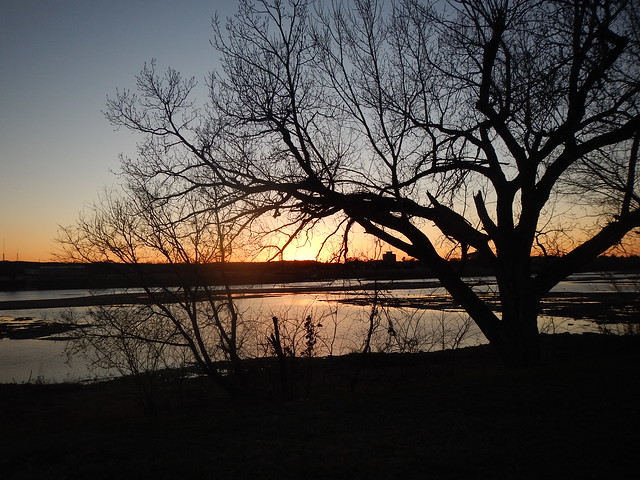 It was about five degrees cooler than I was planning on and there was a fairly stiff northern breeze that I hadn’t planned on either. I was a little under dressed with just shorts and a long sleeve t shirt but I put in three miles anyway. I started out into the wind so that when I turned around I was with the wind. Otherwise, even with the best technical gear you turn into a refrigerator. 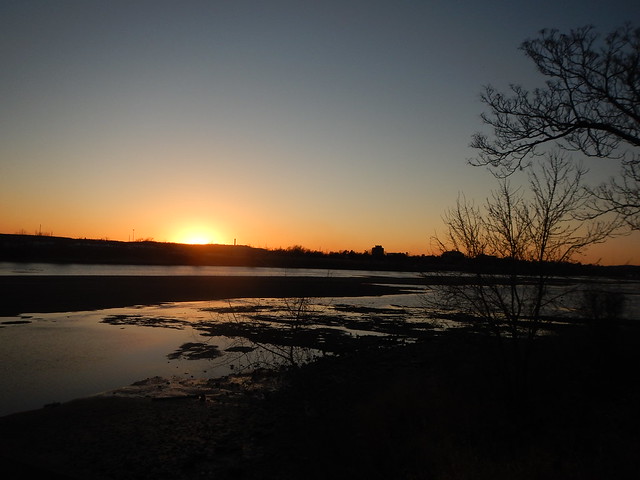 So coming south on the west bank was great, I was very comfortable and was able to enjoy the run. If I had been dressed just a tad warmer I might have gone another mile or two. 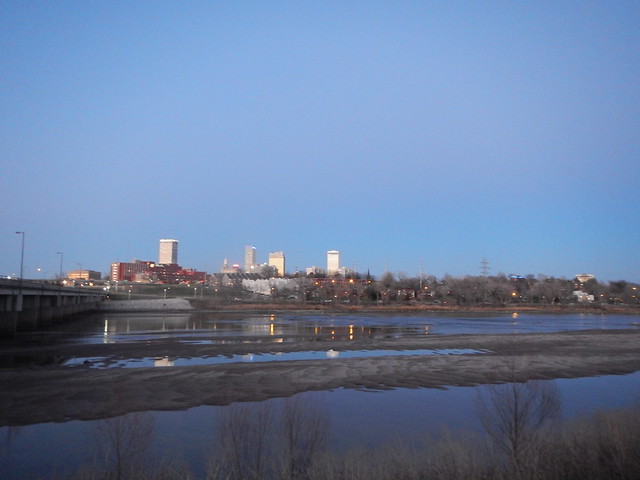 Sorry for the fuzzy shot, on the west bank looking back across the river. Downtown Tulsa is a couple miles past the river.

I injured myself a couple months ago and and been going through a self rehab of run walks, and massage and just trying to be patient and it worked out. Last Sunday I ran in a Quarter Marathon with some pretty good uphills and downhills and finished without any problems so this week on my weekly run I let myself run a lot more than usual. The thing about running is that running, even running as slow as I do, is a lot more fun than walking.

The thing about by new gym at the Methodist church downtown is that I can go change there and then drive down to the river and run my run and then drive back to the gym and shower and get clean clothes on rather than showing up at home all stinky, smelly, and hungry.

As you can tell, I am rather spoiled. I highly recommend being spoiled. 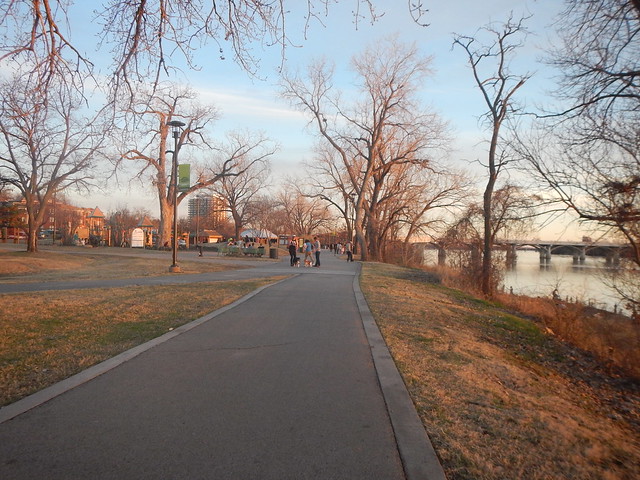 Wednesday evening was springlike. In the 70’s and a very light feel on the skin. I headed to the Arkansas River for my weekly evening run and it was crowded so I had to park in the satellite lot. Walking south I noticed a lot of people hanging out on the trail and I heard music and a rather good natured, nice party vibe going on. I got closer and I noticed some rocks in the water which were new. I’ve been running this stretch of river for 25 years so I know when I see something new. You can just barely see them in the photo above to the right. So I went to check them out. 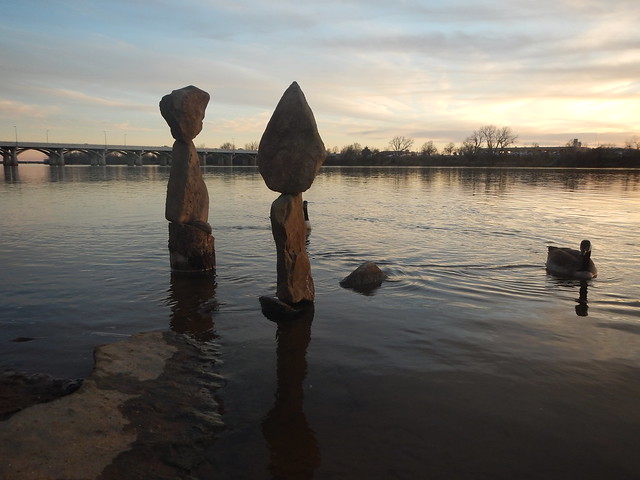 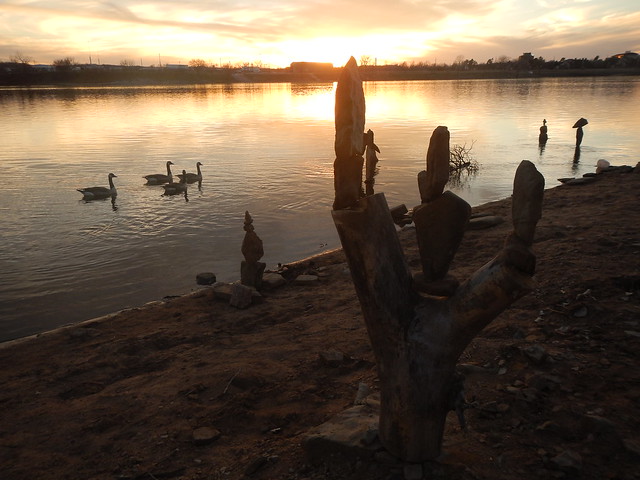 I thought it was cool. There were also people nearby sitting around campfires and just having a good time. I had never seen that either. I’ve seen homeless people with campfires but never just regular people. I’m sure they were violating some rule or another but they were not bothering anybody. 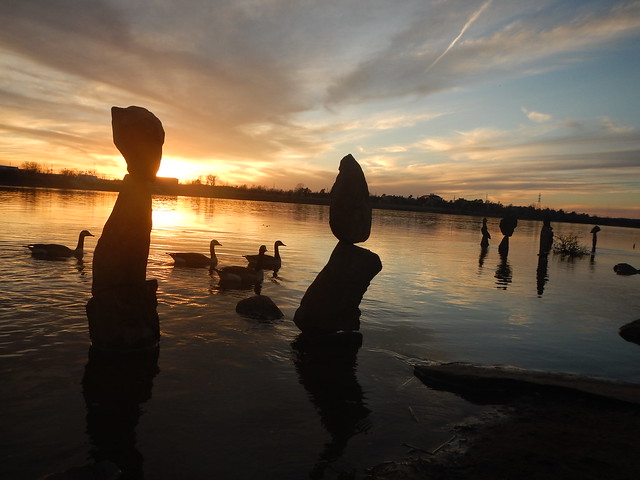 So reading up on balanced rocks, I guess they are kind of controversial because some places they do way too many of them.  Plus they are not welcome in National Parks where you are not supposed to gather anything natural like rocks, sticks, wood or anything else.

But on the banks of the Arkansas River last week they were a welcome addition to the scene.

I’m linking (for the first time I think) with Scenic Weekends. 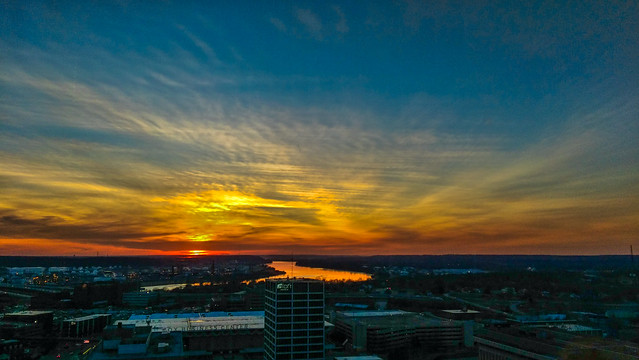 I’m also getting geared up. The safety regs require safety boots while out on location. So I now have some company paid composite toe boots (lighter and more insulating than the old steel toe boots that I tossed into the Goodwill box when I last left engineering) and I ordered some FR’s (Fire resistant clothing) for use while in our facilities. I work in the natural gas industry) My employer provides a generous allowance to buy such items. I’m okay with all things safety including wearing uncomfortable clothes. When I was in operations management way back when my worst nightmare was that one of my 55 guys got hurt. The second nightmare would be having to call their spouse, girlfriend, or parent and telling them the news. Luckily that never happened. Safety for employees and the  general public  has gotten more serious and effective since and that is a wonderful thing.

I will only be in the field occasionally. Guys and gals that work out there a lot wear hazardous gas monitors also. I visited a competitors plant a couple weeks ago and I was one of the few that didn’t have such a device. The plant manager said, okay Alan, if you see us run, I would suggest that you run also. I thought that was hilarious.

So, life and works goes on!! How are things with you. 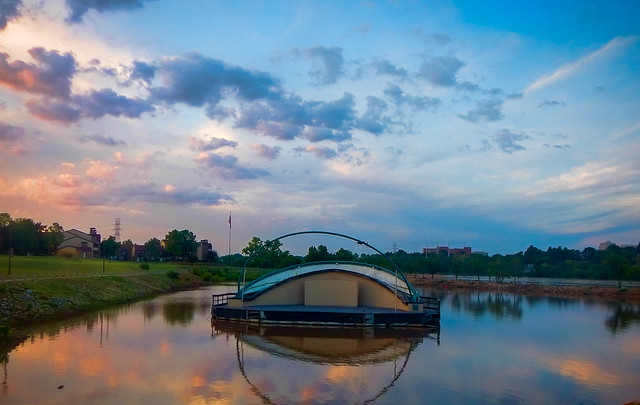 This is a floating stage on the west bank of the Arkansas River. The stage has not been used in years and is apparently too expensive to dismantle and impossible to move so I guess it will just sit there until a tornado takes it out. Back in the day, a lot of big names played on it Joan Baez, Bob Dylan, Leon Russel, and others played on the stage. In the meantime it is biding its time with its memories in a little backwater off the Arkansas River. I don’t know how many dozens of photos I have taken of it, morning, night, noon, all four seasons. I love it. 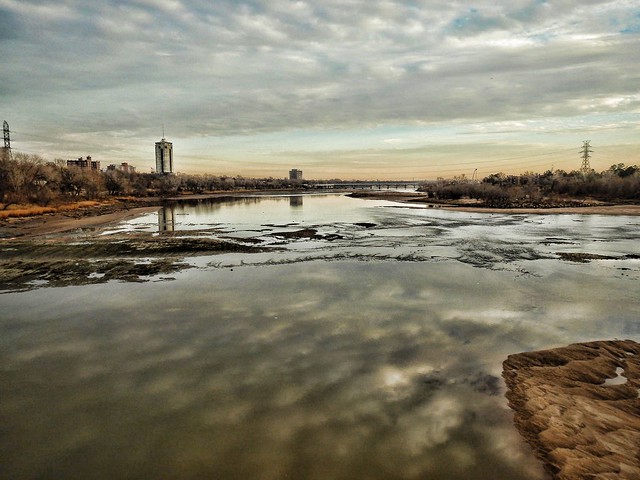 The Winter Solistice was Wednesday. I went out on the Arkansas River trails here in Tulsa to get some fresh air. Fall has definitely given over to Winter here.  If we can just get through this season without ice I’ll be happy. 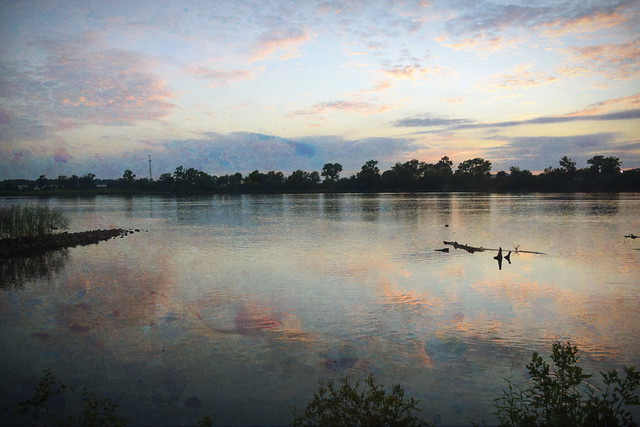 Evenings on the Arkansas River this time of year are very peaceful. The weather is mild and pleasant and there are lots of people out strolling with the kids, bike riding, running, and skateboarding. Its the place to be.

I cheated on this and used a texture backed off about 75%. 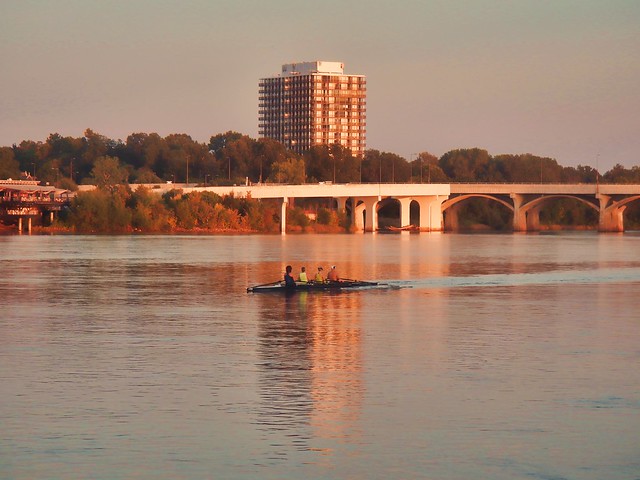 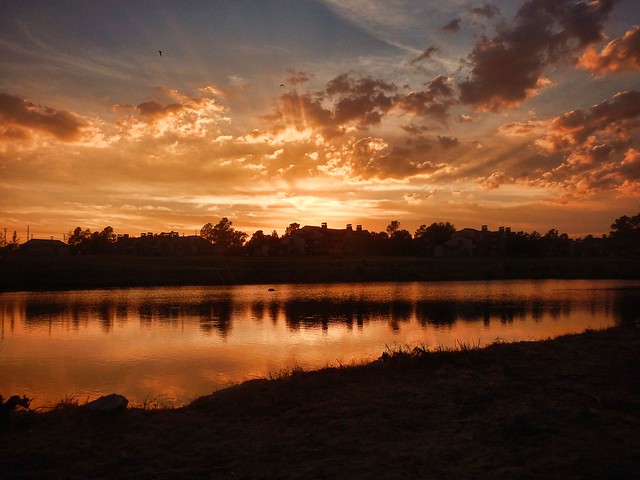 Tuesday night I made a run late in the day on the Arkansas River Trail right off downtown here in Tulsa. I was able to get this shot above of a sunset. Pretty soon my evening runs will be in pitch dark but now I’m enjoying the earlier sunset and slightly cooler weather. 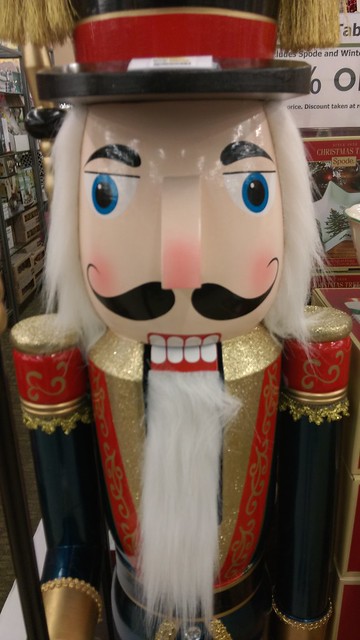 Too Early!!!! We saw this last night in a department store. ugh 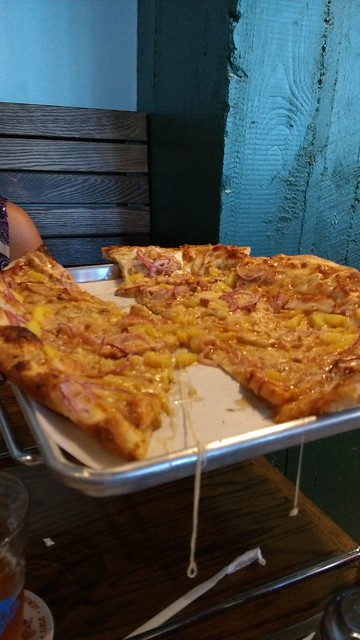 Heather and I ate at a new brew pub in town Elgin Park in the Brady District. Oklahoma is slowly digging out of the dungeon of liquor laws in the country. Brew pubs are one benefit. It was just the two of us and we ordered a medium pizza. That is the biggest medium pizza I have ever seen. 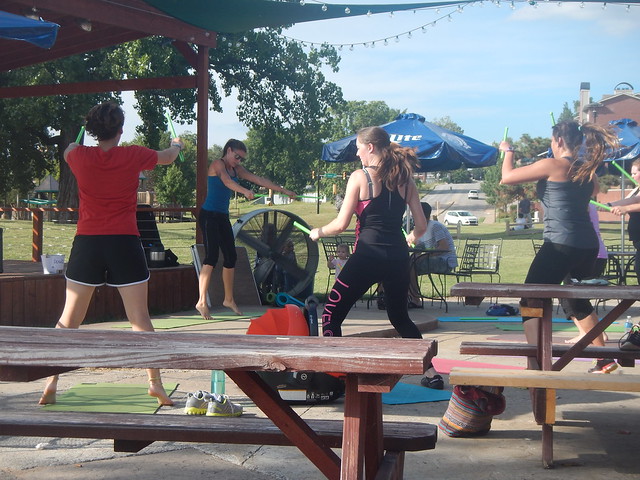 After the beer and pizza we went down to the river and walked (I actually waddled) a few yards and encountered these ladies doing an exercise class with drum sticks. I think Heather said it is called “Pound.” It looked very high impact. We got exhausted sitting on the picnic table just watching them. Heather is taking a class all day Sunday on how to be a BollyX instructor. What happened to jumping jacks and pushups is what I say. We took a water exercise class together Friday at our gym. It was fun! 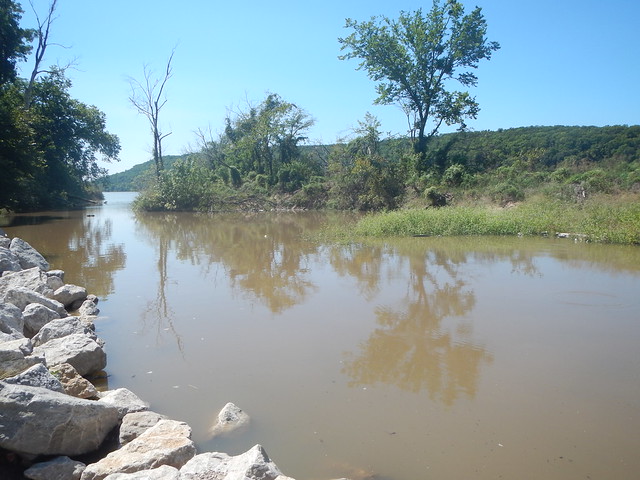 Earlier Saturday I went for a run on the river. I’m trying to get ready for the Tulsa Run 15K in the end of October and I’m trying to not to aggravate a sore knee. Poor me. This is what I call hidden cove on the river. I think it is actually a boat ramp for the police and fire department. Nobody seems to know about it but me, and now you. Don’t tell, okay? Oh by the way, across the river there is my much beloved Turkey Mountain. 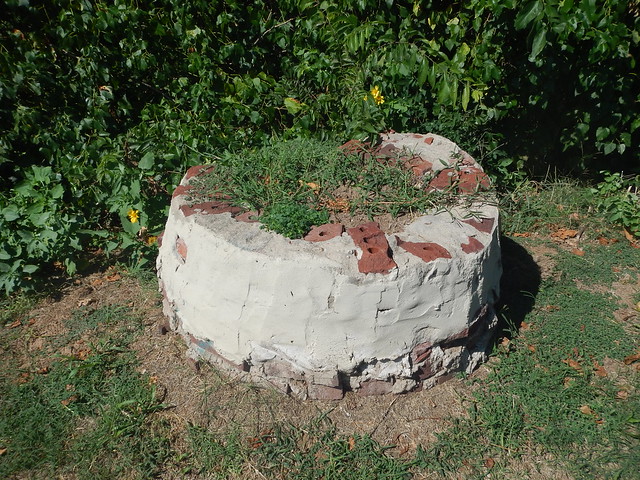 And speaking of not noticing. I have been running the Tulsa River Trails for 24 years now and yesterday and just noticed this for the first time near the rugby fields. I swear I have never seen this thing before. What’s up, with me? It looks kind of amateurish and not some early day remnant to me. 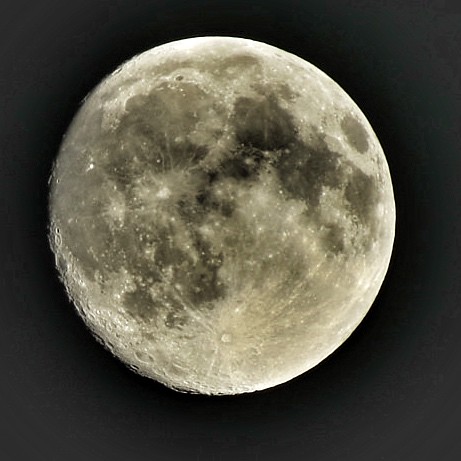 And hey, we had a Harvest Moon this week. Woopee. And a lunar eclipse. I didn’t bother to stay up and see it.

And our refurbished library which has been undergoing a renovation for three years is going to open at the end of September. Meanwhile it has a brand new Starbucks that has opened early. Supposedly it is the first Starbucks in a public library in the US. That’s great, what would be greater would be a locally owned coffee shop. 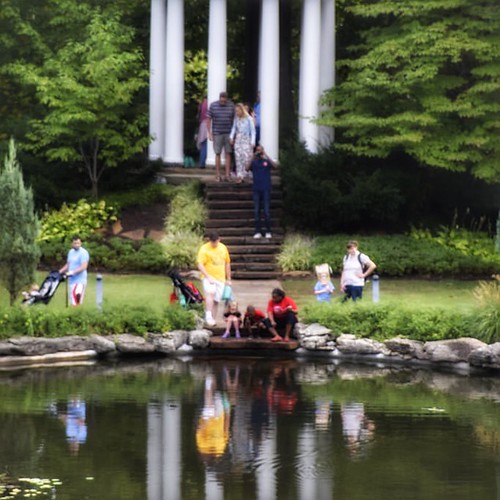 I went to Philbrook last week. Lots of people there so I took some photos. 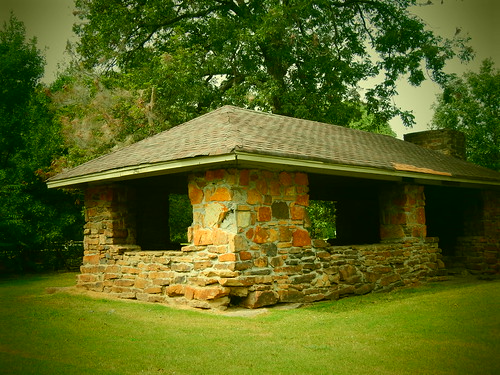 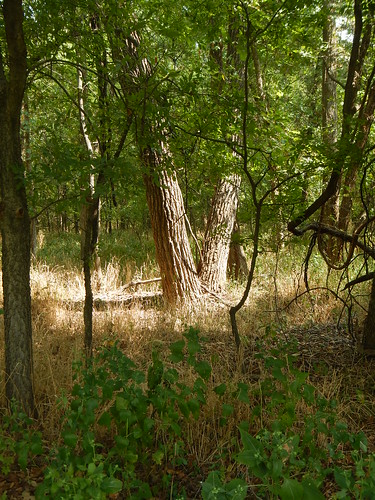 I only looked for and found one geocache. This one kind of had a geobeacon leading me to it. I think I had some sort of divine guidance on where it was located.

Anyway, that is it.