After basically a month of no clouds except blue sky we are finally getting some weather. So if the winds are down I launch my drone from my back yard to catch the clouds.

Evening is best when you get a little color in the sky.

This is looking east at the back side of a storm system that came through.

We had a quick rainstorm pass through Thursday morning. Here’s our back patio afterward. Nice to see all that water!!

I took my drone to my MIL’s house who lives not too far away and launched it during the middle of the day. I love big old fat clouds against a blue sky.

Here he is when he was four years old. Is there anything sweeter or more rambunctious than a four year old?

I am linking with Skywatch Friday, come check it out!

I’m still #WFH (“Working From Home”) in twitter/instagram speak. Mostly retirement paperwork. Lots and lots of paperwork. My home office is a mess. I’m going to have to get some file storage that works.

Other than that getting lots of reading done. I read “American Terrorist: Timothy McVeigh & the Oklahoma City Bombing” by Lou Michel and Dan Herbeck. What a story told from McVeigh’s point of view. From war hero to bum. Killed 168 people because he was mad about government overreach. He didn’t care about the innocent people. Collateral damage as far as he was concerned.

So the wife has been gardening and I’ve helped her here and there. And I’ve been flying my drone when the wind allows. It’s fun and easy.

As you can tell I am not a very smooth pilot. Fortunately the drone stays still while I am trying to figure out what to do.

And we are eating lots of ice cream. Rose Rock is a store based close to downtown Tulsa. They hand make their ice cream and they deliver!! Life can’t be too bad if you are eating ice cream is what I say.

Here’s my latest Covid-19 Update for Oklahoma. Deaths are not declining, new cases are going up, hospitalizations are going down. What’s it all mean? You tell me.

So today’s LaCoronaVida is about Ginger our rescue wiener dog mix. She’s 14 years old and you know things get a little touchy at that age with dogs. She’s been having trouble for a while with her rear legs and this morning she could hardly move them. As she got woke up things got better but still. So Heather called the Vet and we got an appointment at 4:30 this afternoon.

So we had all day to think about it. I mowed the yard and Heather did some gardening and we ran a couple errands but our hearts were not in it.

At about 11, the State of Oklahoma released the last 24 hours data on our Covid-19 situation. New cases and deaths have been plateaued for weeks and hospitalizations are trending down. Okay, lets open her up and let her rip. Golf Courses, and stores opened up here today. We are still isolating cuz that is how we roll.

So finally the day passed and we scooped up Ginger and went to the Vet. Vet thinks she needs acupuncture and gave us a referral. I felt like a big weight had been lifted from my shoulders. I mean Ginger is a pain in the ass but we love her. And we know that its just a matter of time with her. In the meantime, she bright and alert and loves to eat. So we’ll check out acupuncture for the old lady.

Now that I got you cheered up how about a drone video from my new toy. I put the drone over Heather’s head and sent it up as high as it would go. It is limited because we are in the flight path of one of the runways. It’s still pretty high.

So it was another day of LaCorona Vida. Running errands with our masks on and curb delivery. Less and less people are wearing face masks. So I guess we are getting used to this.

Centennial Park is a quiet spot just to the southeast of downtown Tulsa. It’s actually a park built around a water detention pond as part of Tulsa’s flood prevention system.

Things are much better now but in years past with an urban park with nooks and crannies you never knew what you might see as you turned the corner on one of the paths. So I kind of shied away and kept my head on a swivel when I went there. Mostly it was homeless people and almost all of them just wanted to be left alone. Last week there was nobody there except a city parks employee who was interested in my drone flying.

The park has a big pond with two fountains and has the city center as a backdrop. Way back when this was one of my favorite running routes at noon, taking loop around the pond and paths.

That day though I was with my new toy trying to get something besides me out in the middle of a parking lot. The guy walking up in the video is the parks guy. He had sprayed for weeds a couple days before and he was just checking on things.

Come join the fun at Our World Tuesday

I read with a little alarm and much interest about the drone attack on the Saudi Arabian Abqaiq Oil Processing Facility and other infrastrucutre recently. Big deal I say. Yes, it is a big deal, the Abqaiq facility with a capacity of 7 million barrels per day and 5 million throughput is shut down for now! That gets my attention! The Houthis of Yemen are taking credit while the US claims that Iran is behind the attack. It turns out that the Iranians have drones with a theoretical range of almost a thousand miles!!

I say theoretical because the Iranians do not have satellites so they have to use ground stations to control their drones which limits their effective range to 100 to 200 miles depending on what you read.

Still not worried about it? How about the following video which shoes Iranian Drone video of an American Aircraft Carrier taken from directly over the ship?

Don’t get too excited. Iran has great social media people and there is a lot of speculation that the video was faked using video available on the internet. If you have ever looked at Iranian Military social media you will know that they are very enthusiastic but not convincing, and I am not convinced.

What I get excited about is that Iran has well developed drone technology that have used in battle in Syria and other places. hundreds of times. Meet the second generation Shahed 129 drone, their most advanced drone.

According to Wikipedia, this aircraft attempted an attack on coalition personnel but failed. Also, the US Air Force shot down one down. It can carry about to four bombs or missiles, and/or conduct surveillance. From what I read a lot of the US sanctions and embargoes have been efforts to keep the Iranians from increasing the capabilities of their drone technologies.

The US is accusing the Iranians of launching the attacks on Abqaiq. This all points to Asymetrical Warfare which involves war between combatants with vastly unequal capabilities. This seems to be something that American leadership consistently does not take into account and we suffer as a result. The Iranians, the Houthis, Al Qaida, whoever, would be stupid to try and match up the United States and our Allies in stand warfare. They would be wiped out. So they develop other, cheaper strategies that tend to drive us crazy, IED’s for example, that neutralize our advantage.

You always have to be ready for unexpected is what I have learned over the years and one is most vulnerable when you feel most invulnerable. Somebody may not be playing by the rules you set. They will have their own rules. It appears that ten inexpensive drones easily defeated a world class air defense system and shut off five million barrels per day of oil from the world’s energy supply.

I finally got my drone. It is just a toy. So sorry, no HD camera to peek into your window or hellfire missiles to mess up your terrorist plots. 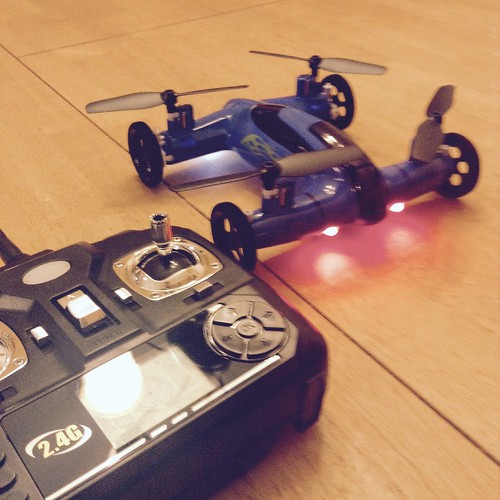 Just something that goes bzzzzzzz and so far is beyond my capability to control. I am going to have to go to a bigger space so I don’t have to worry about it crashing into my neighbor’s yard. 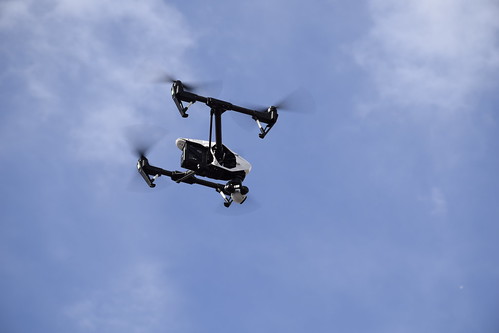 But have no fear, I’ll figure it out.

I’d love to get a “big drone” one of these days with an HD camera. I’ve seen some incredible footage from the air. 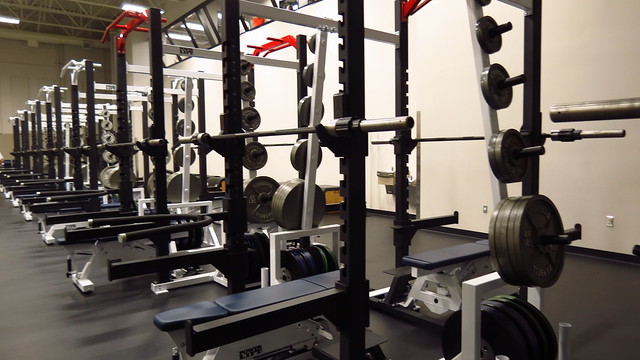 As I’ve posted earlier Logan has moved over to another school. Things are going well and he has had to step up his game quite a bit but he has started settling in. Tonight we went to the school for its first football game of the season and to attend a tailgate party with the Head of School and tour the new weight room. 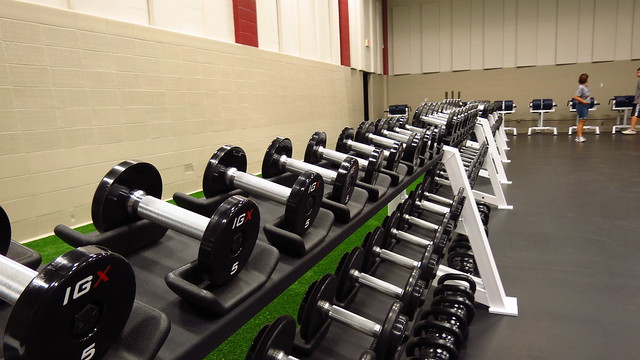 Logan is not a football player but we were seriously impressed with the new weight room. Seriously, a lot of equipment. 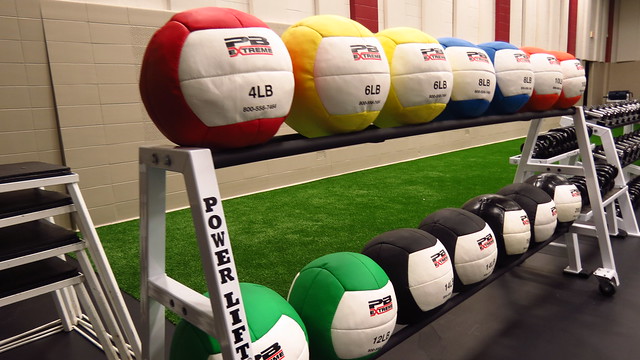 Things have certainly changed since I was in high school. And seriously, I am so glad!! 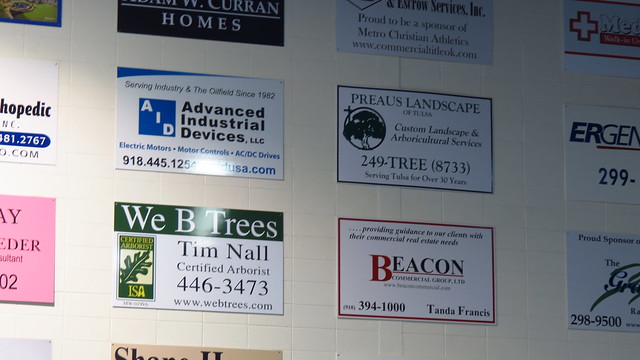 When I went to school, way back before the dark ages even started, there were no sponsors for the schools. 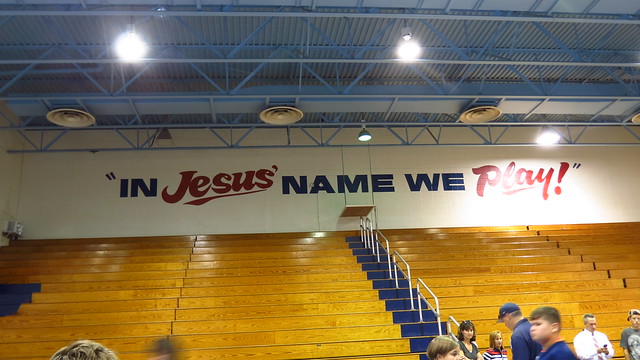 I love the slogan “In Jesus Name we Play” 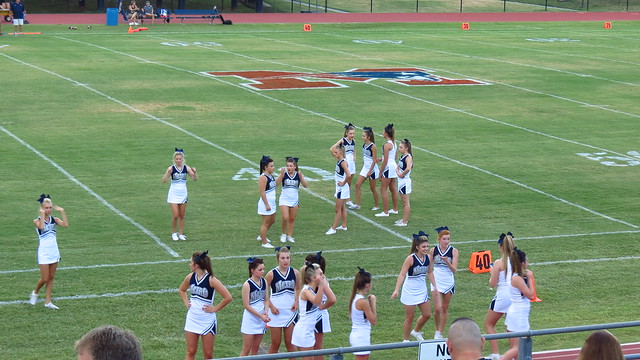 Well, we ate our burgers and listened to speeches and then it was time to head out to the football field. The school has lots and lots of cheerleaders. I think that is a good thing. Maximum participation is my thing. You know when I was their age I thought the cheerleaders were so exotic and beautiful. Now they seem so young! Heather says that is because I am so old. She has a way of reality checking me. One thing that is the same is that cheerleaders really get into what they are doing. I think it is good for young people to get into what they are doing. Matter of fact, that is good for everybody!! Don’t ya think? 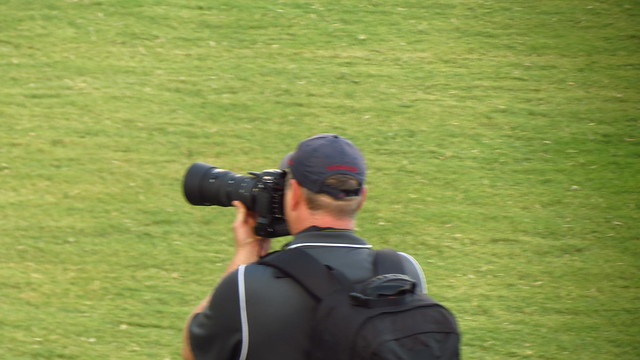 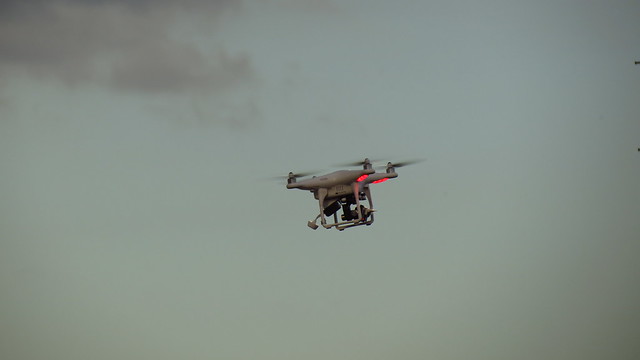 Whoa, what is that! It is a drone. These kind of drones have cameras instead of Hellfire missiles. Which makes it my kind of drone. I instantly updated my Christmas list right then and there at the game. Heather tore up the list. 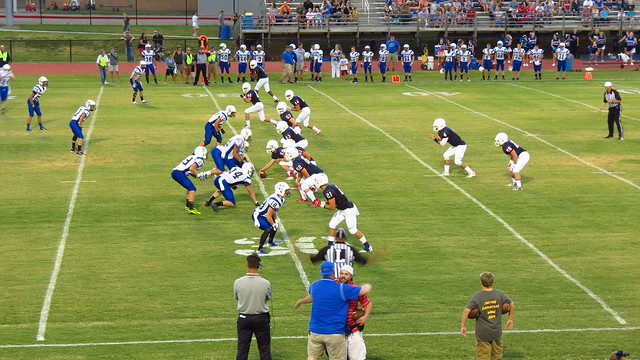 And then the game started. I love football. It has been 43 years since I last attended at high school football game at good old Round Valley High School in Eagar, Arizona. I don’t know why those guys on the sidelines are hugging each other. 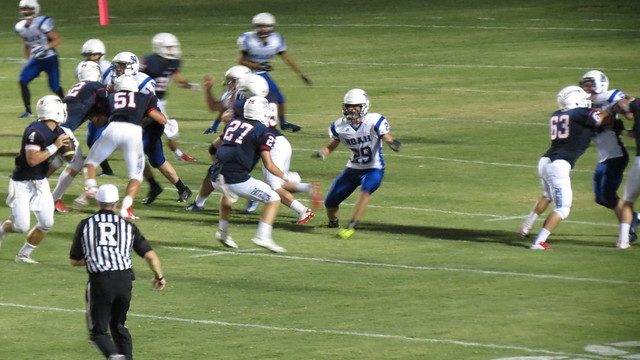 Logan’s school was playing a home schooled team. That is something else you never used to see. They played danged hard. I love watching a good game and there was lots for both teams to feel good about.

We left at half time. Bleachers have not gotten softer in 43 years but I have. We’ll be back.

I found a drone on Amazon for about $50. Check it out.

Here is a video of it in action.

Here is an example of the video from the $50 drone