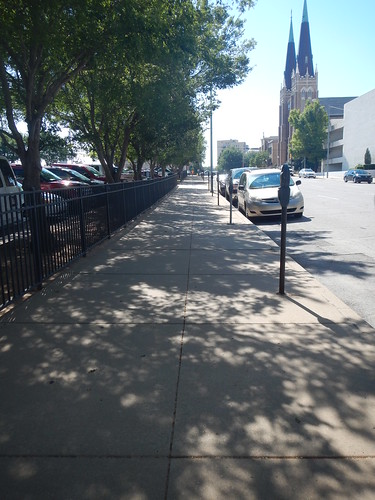 My old gym went out of business a few months ago. And so I rejoined a gym that I used to belong to until seven years ago. The gym is run by a Methodist church and just like a Methodist Church they still had me on their files and gave me my original member number back. When members show up you have to fill out the log, name, member number, time, and planned activity. We Methodists are fiends for documentation; 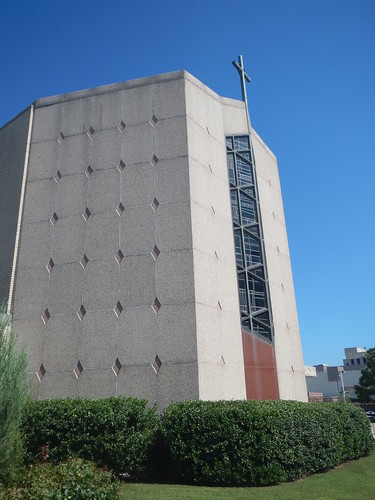 Anyways its about a 3/4 mile walk from the office. I have noticed the past couple months that our homeless people are increasingly sitting down and laying down on the sidewalks. Just the left of the photo above there was a guy sitting down on the sidewalk blocking everything but about a foot wide strip of concrete. I walked right past him and he asked me how I was doing, Great! I said, and you? He was doing great also. I felt like saying, then get your butt off the sidewalk dude.

So what is up with sprawling on the sidewalks? 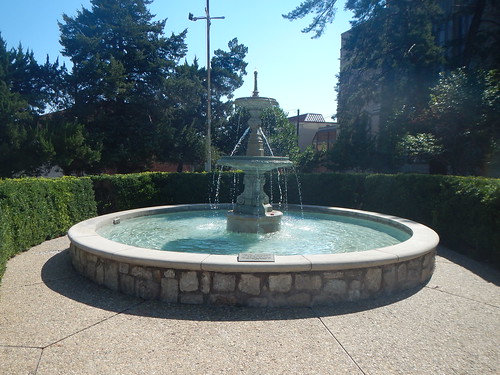 Hey I crossed the street and come to Cathedral Square which is actually a City of Tulsa park. I love the fountain. 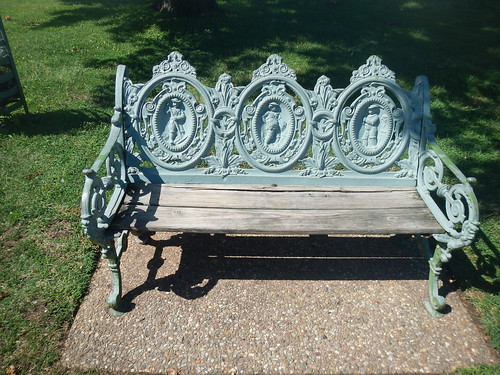 And it has the fanciest wrought iron benches in town. 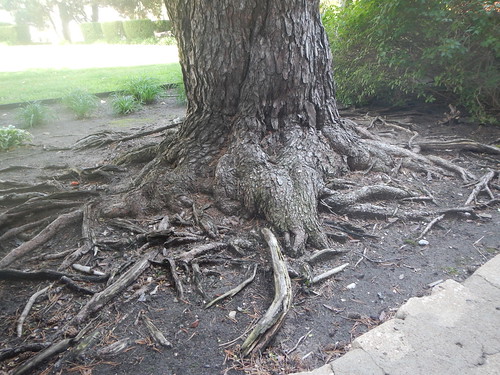 And I came to my favorite tree. Sometimes I feel as old as it looks.

So, what did you do today? 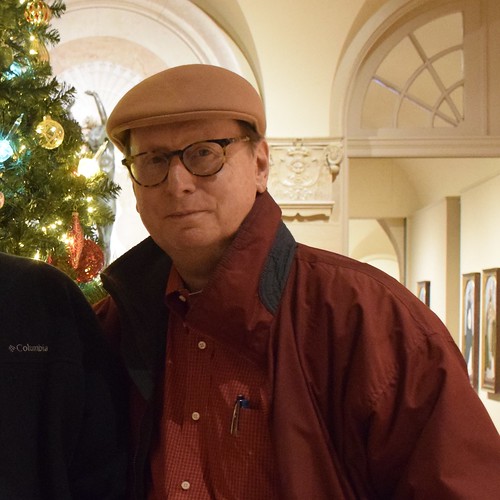 Wednesday night I was at my liquor store downtown waiting in line to buy some craft beer as a reward for the run I was about to do. The guy ahead of me in line had a bottle of vodka in one hand and a ten dollar bill in the other. He was a homeless guy that I have seen in and around downtown for years. He turned to me and said, “You know you look just like those guys in the old time photographs. That cap and a sportcoat and khaki slacks. You know not everybody can carry that look off but you can.” So I said thank you very much. He asked, “So what kind of cap is that?” and I said that it was called flat cap and a friend from Uruguay got it for me and I love it because it was pretty darn warm.”

So he said “Really” and asked to look at it and so I handed it to him and he said, “No wonder it is warm, it is wool felt.” And I said, “sure is” and he handed it back to me and turned his attention to the clerk as it was his turn.

In a genial manner he told the clerk “Hey, that woman working here this morning said that I can only buy something once a day from you guys.” The clerk said, “That’s right sir we aren’t allowed to sell to the same person twice in a day.” So my new friend said, “Well you know that makes it kind of hard on me because I go through two of these a day” as he held up the bottle, “and I don’t want to be carrying one around all day. You know what I mean?” The clerk said, “I am sorry about that sir.”

And then the clerk said, “You want this in your backpack sir?” and the my guy said “Sure lets put it in there” and while they are doing that he says, “I haven’t decided what I’m going to do yet. My daughter,  I haven’t seen her in 17 years is flying in and said she is going to find me and I don’t know whether I should meet her or just go get drunk. What do you think?” The clerk said “I think you should go meet your daughter.” And I said, “I vote for that plan.”

The guy laughed and said, “Well we’ll see what happens, you guys take care.” And off he went out of the store.

For some strange reason, the guy made me feel good and bad at the same time. I have not met very many people so open, direct, and non-defensive as this guy.

Have you ever had a homeless guy make you feel good about yourself? 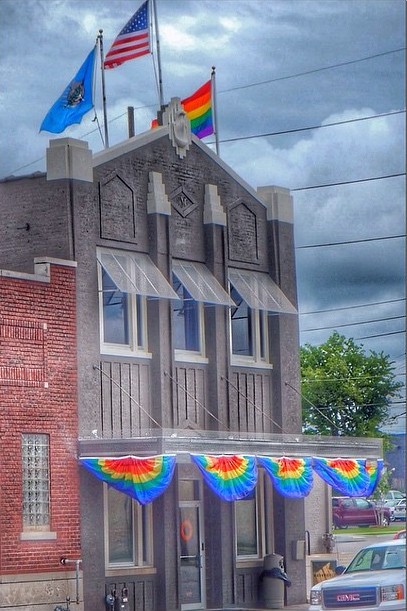 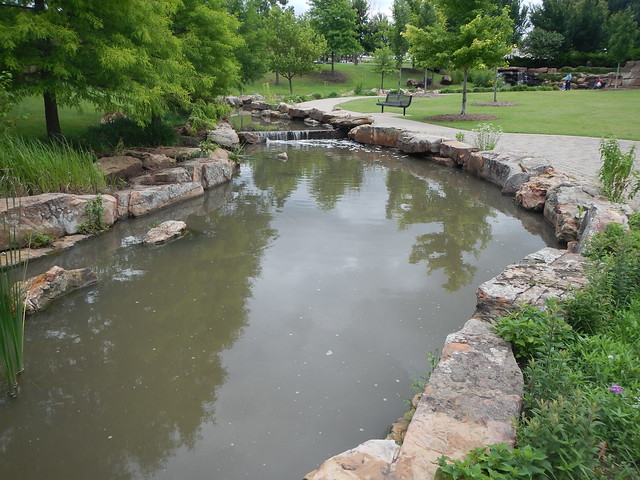 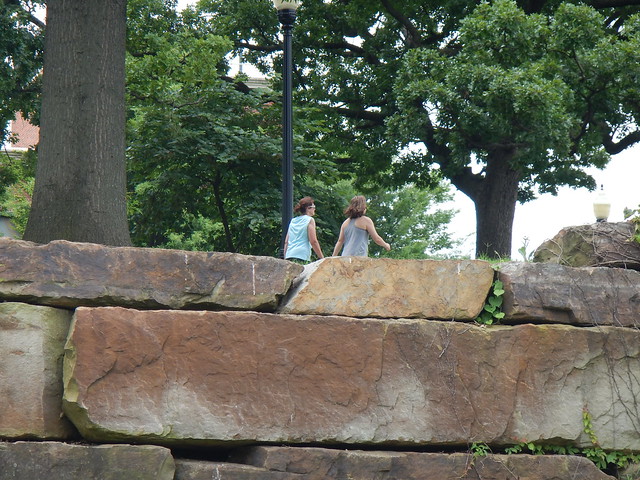 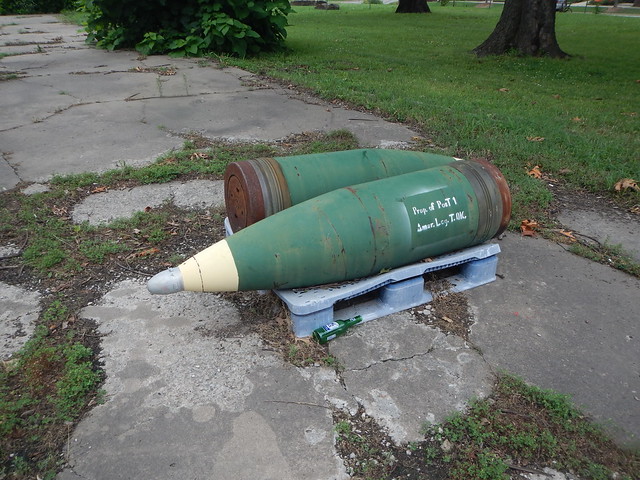 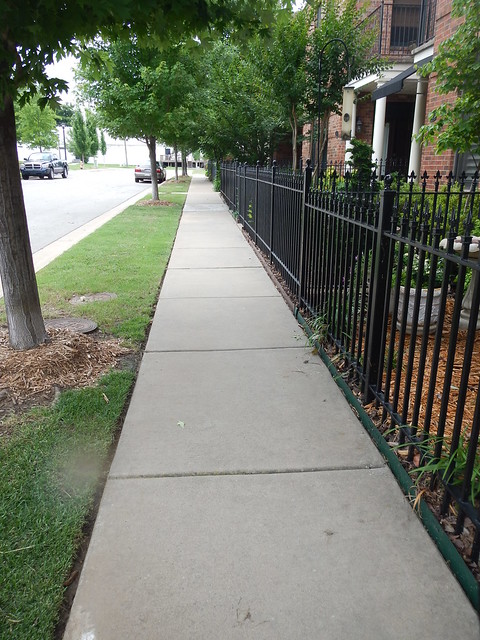 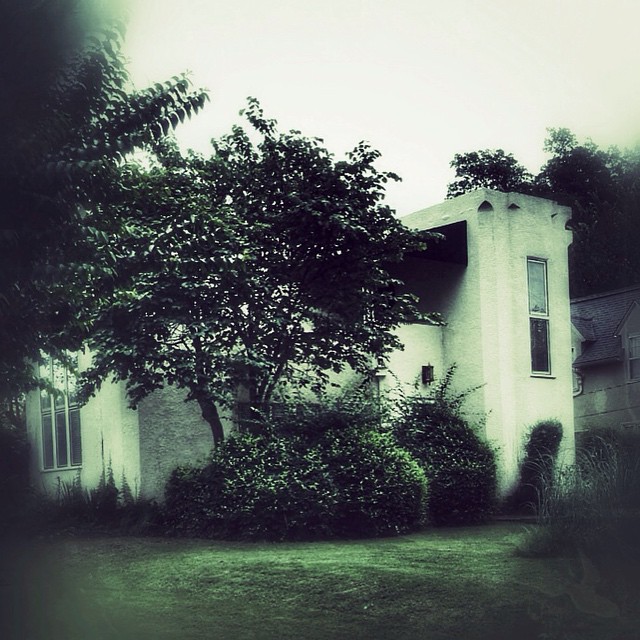 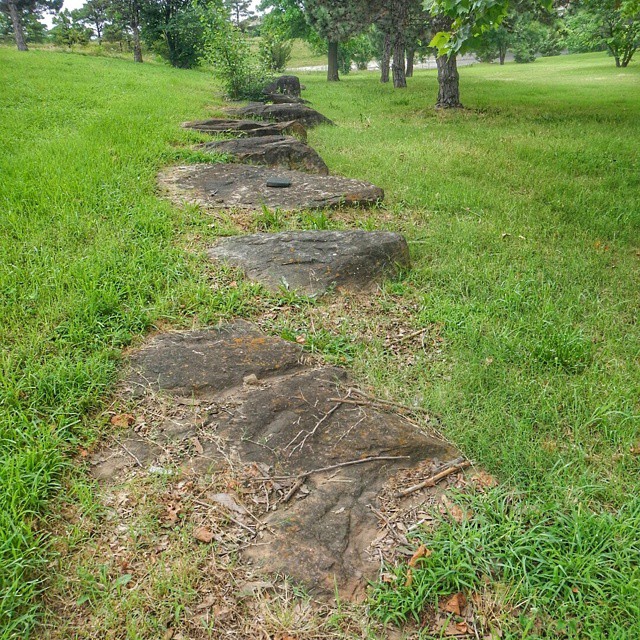 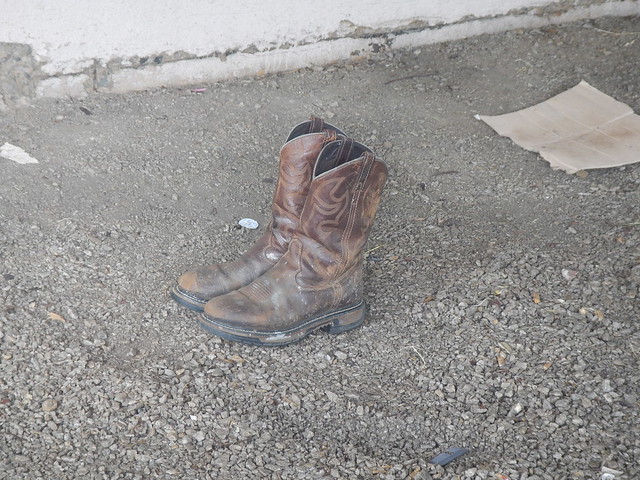 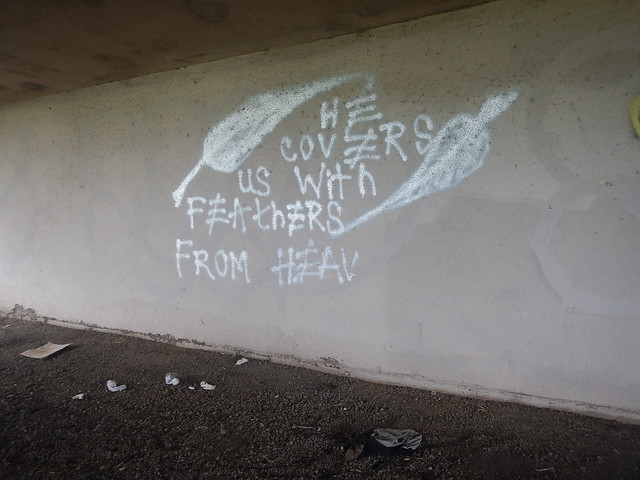 I guess he ran out of paint. Or maybe he got ran out. 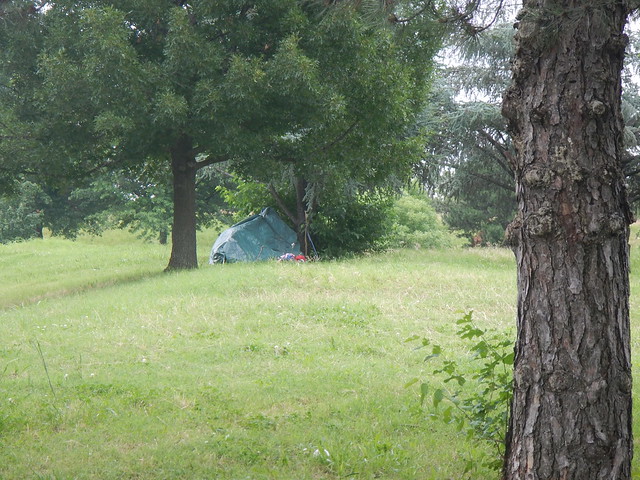 It is amazing, if you look closely, how many people sleep outside in and around downtown. 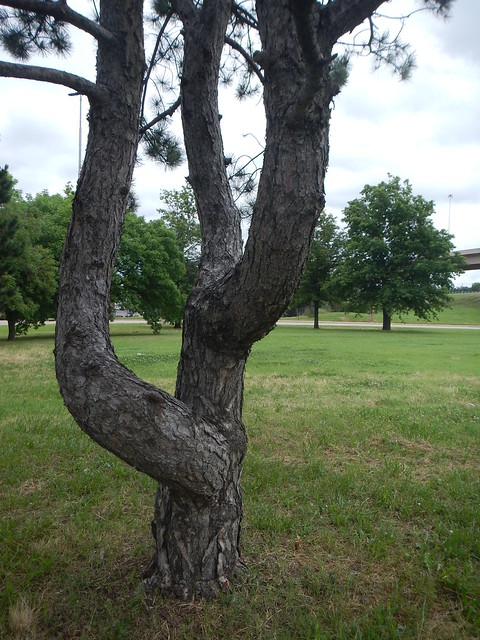 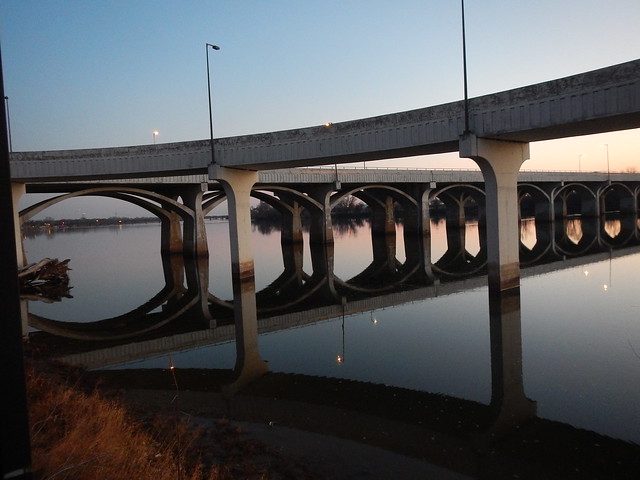 Wednesday night after work I went to go running on the trails along the Arkansas River here in Tulsa. It was the first time I’ve since I tripped and fell on Turkey Mountain during a night run. It didn’t feel bad at the time but my side hurt and kept getting worse especially when I ran. 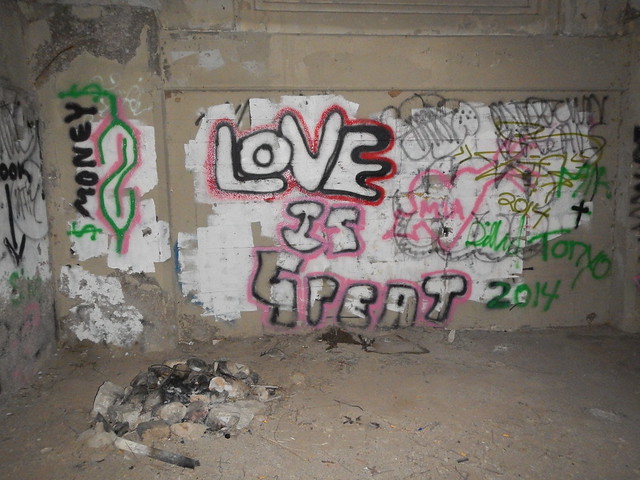 I finally did the miracle cure for stuff like that. You want to know what the miracle cure is for almost anything. I bet you already what it is. You make an appointment to go see the doctor about it and you get cured about an hour before your appointment. It works every time!! 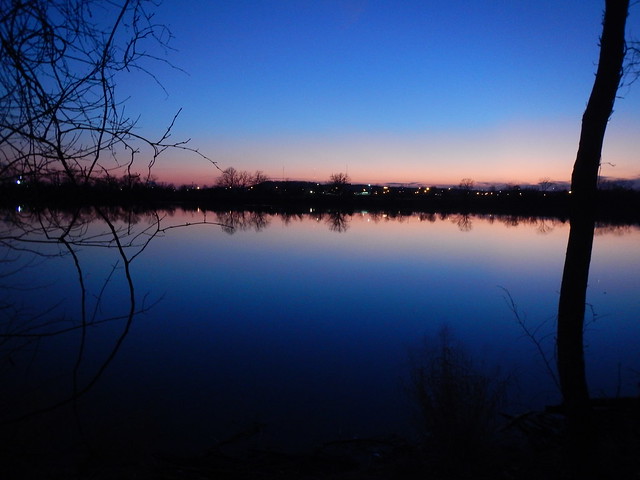 Anyway, Wednesday night was kind of cool but there was hardly any wind and the river was very smooth. 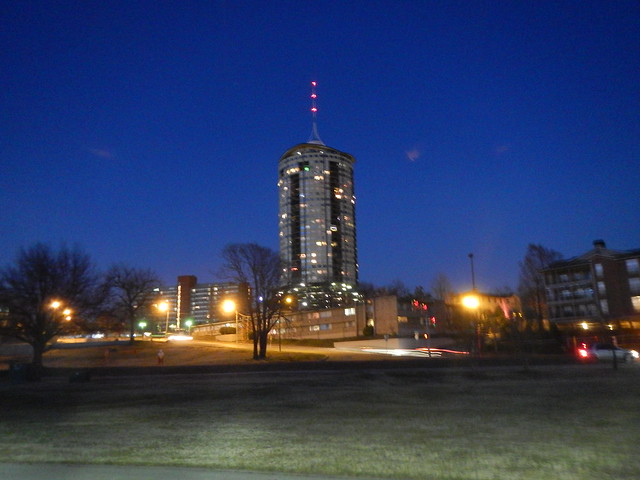 I ran past the University Club Tower. Just so you know, it is the eighth tallest building in Tulsa. You never know when a little tidbit of knowledge like will come in handy. 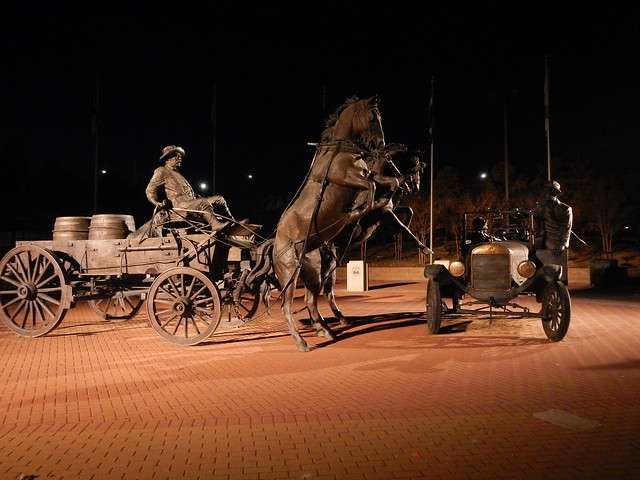 I got up to the far north end of the River Trails and went over to check out “Where East Meets West” a sculpture in honor of Cyrus Avery, the father of route 66. I approached it cautiously because at night I didn’t want to be accosted by homeless people looking for a handout. I got close and I was about to take this photo I saw this guy walking quickly over in my direction with a big smile on his face. I knew what was going to be next. A pitch about some plight he was in and an invitation to help. I’ve been through it a million times and no thanks, I don’t want to go through it again especially in an isolated area in the dark.  So I snapped the pic and went back across the street and continued my run. 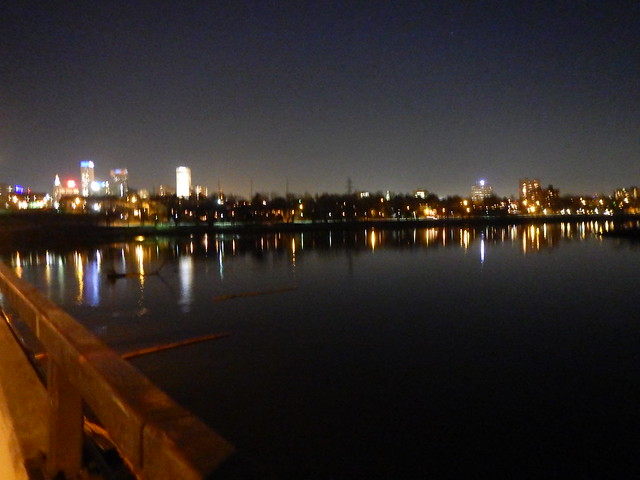 It was my first run in two weeks and parts of the trail were blocked off for construction so I called it quits after three miles.

So, the question of the day is: Have you ever experienced the miracle cure?