I was out geocaching in east Tulsa the other day when I noticed a sign for Harvey Young Airport. The name sounded vaguely familiar so I drove down the road until it dead ended into the airport which had no gate or fence but a big No Trespassing sign. I always respect those and so stopped and took a couple of photos. There was not a whole lot to take photos.

There was this old hangar. I posted this on Forgotten Oklahoma facebook group and somebody responded that it once housed an aircraft mechanic’s facility. The glassed in part was the office and the rest of it was where the work took place.

The airport was started by a guy named Harvey Young who landed in a pasture back in 1940 and ended up buying the land. It became a base for training military pilots during World War II and then reverted back to General Aviation afterward. Somebody bought the airport and announced big plans in 2017 to demolish the buildings and build new and cater to vintage airplanes. It doesn’t look like much has happened since then. The developer still has his web site up.

This was the only aircraft I saw. A Beechcraft Bonanza. They have been in production since right after World War II. The V tail is its distinctive feature although there are Bonanza’s out there with the conventional tale. I found out that the Bonanza is also known as the Doctor Killer because it is a very expensive, high performance aircraft, and lots of professionals like doctors buy them but don’t have the necessary skills to fly it. Someone who is a pilot and has flown it told me that the V tail model in particular is very hard to control if you get into a spin.

A brand new Bonanza will cost you about one million dollars.

I am linking with Skywatch Friday. 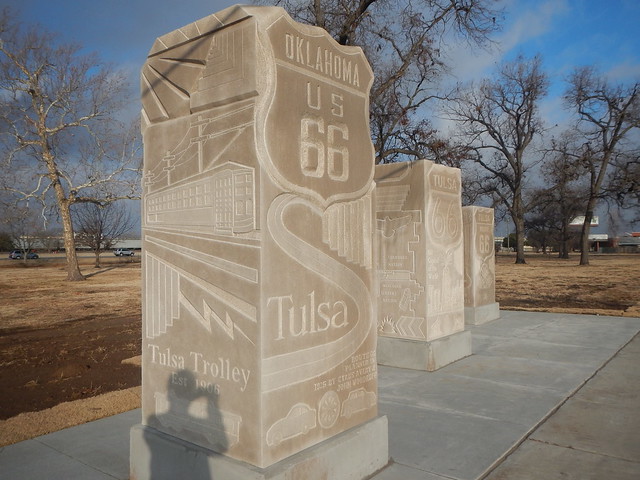 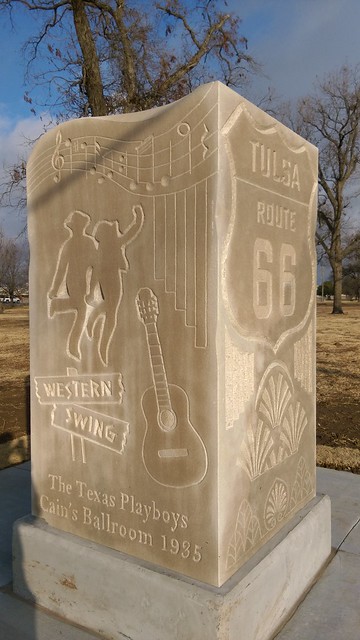 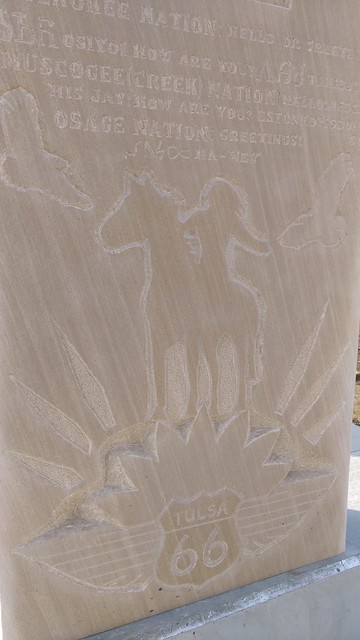 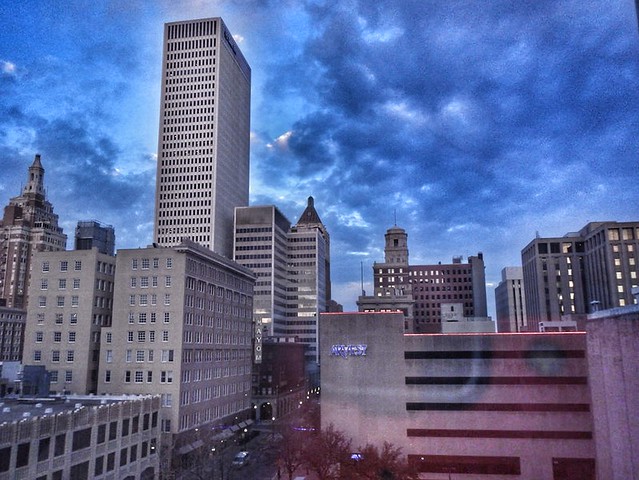 This is a view of downtown Tulsa. My favorite part of it is the reflection of my Nikon Coolpix AW110 against the building to the right. Used to be I’d worry about it and now, I’m like hey that is the way it is. There is lots of other things wrong with this picture but what is right about it is the tall building against the funky sky and the reflections of the western sun in the windows.

I also love it for the tower of the building to the far left, the 320 south Boston Building. Legend has it that the tower was designed to dock dirigible airships back in the 1920’s or so. I love that legend even though there are skeptics who say otherwise.  I say pooh on the skeptics,

What about you, do you have notions that the skeptics don’t like? 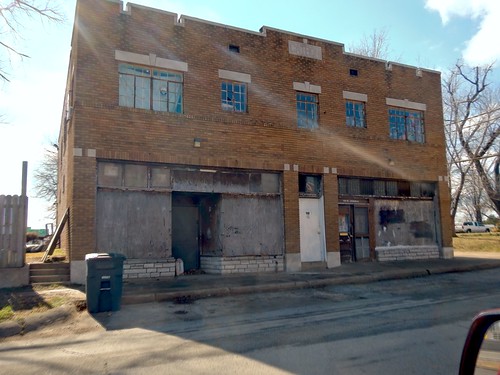 On a lunchtime geocaching expedition to a not great area of Tulsa just to the west of downtown Tulsa on West Admiral I found this gem of a building. It looks abandoned but there is a shiny mail slot in the door to the right and a city garbage container to the left. This looks like it used to be stores below and apartments or offices above. I”m trying to figure out what it used to be.  I love mysteries like this. 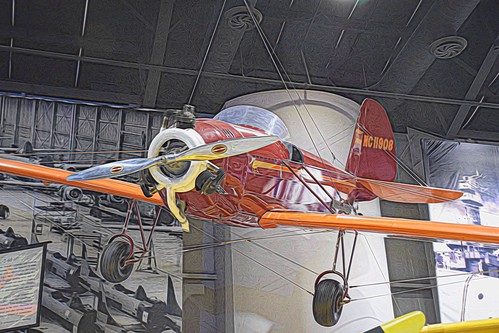 I was on Google Earth the other day trying to figure out how to get somewhere when something caught my eye. It was a a huge tag looking straight up into the sky with the words “Tulsa” and above it a similarly gigantic arrow pointing west. Below is a screenshot from Google Earth.

I looked at it and zoomed in and out and it looked a little photoshopped to me. You know, just too perfect and too white to be the real thing. By the way that loop road to the upper left of the TULSA sign surrounds a buried water reservoir still in use today. That is why the area is called reservoir hill. That and it is a hill. 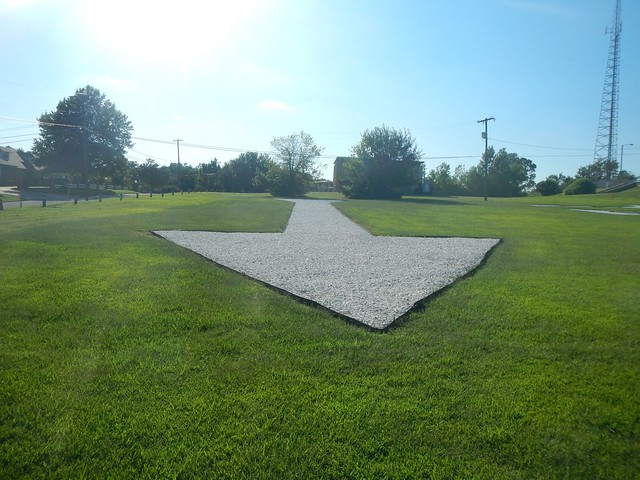 So after work naturally I had to run up there and see what’s what. Actually with my bum knee I drove up there and sure enough there is a huge arrow and TULSA sign made out of crushed rock. 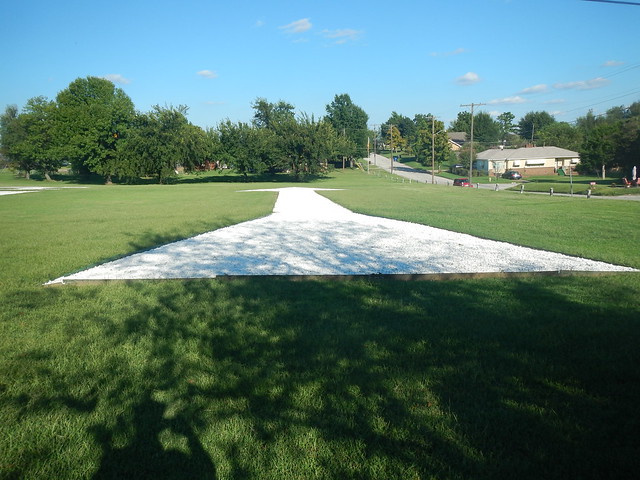 It turns out that this is a recreation of another arrow installed right on top of the reservoir back in 1927. It was part of a promotion celebrating a Charles Lindbergh transcontinental flight at that time. It pointed a little to the southeast of the where the present arrow points to which is the Tulsa International Airport. You can see a photo of the old arrow here. 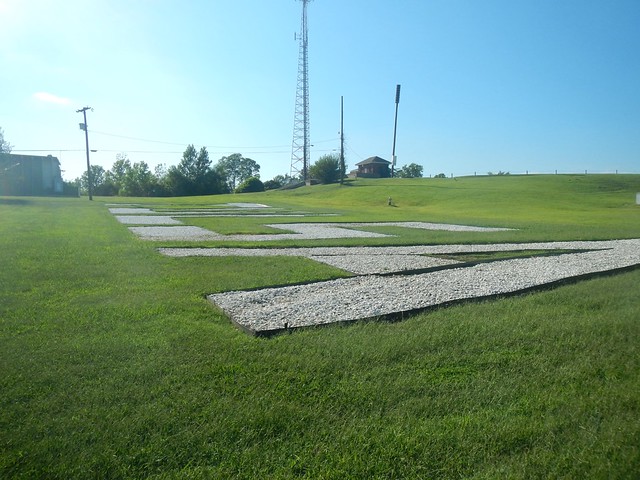 The new arrow was installed a few years ago with some bond money devoted to neighborhood projects. You can read about that here. 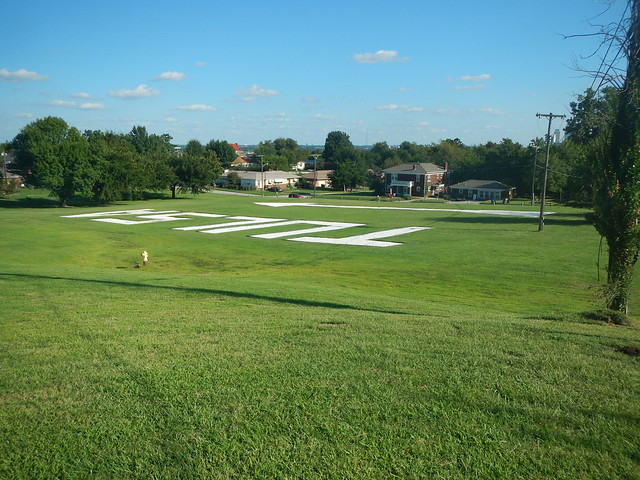 It was kind of hard to get an elevated view of the sign and arrow even when I walked up the hill.

I think the whole thing is kind of cool. It is a bridge back to the 1920’s boomtown era and Charles Lindbergh, the oil tycoons that ruled Tulsa then and whose influence is still around today. I had never heard of this arrow before and I pride myself on knowing all sorts of little things about Tulsa.

Do you know any interesting tid bits about where you live that nobody else does?