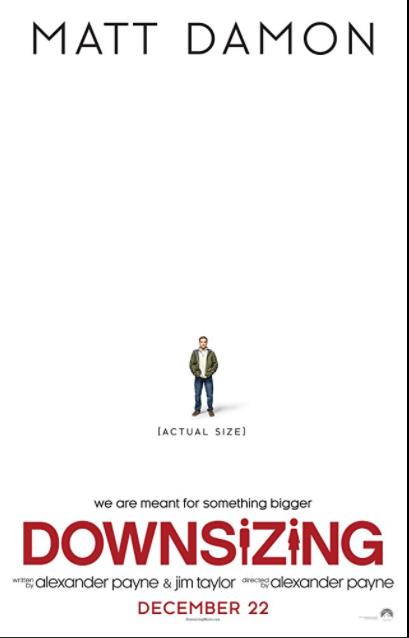 Downsizing is a fun little movie. It is a kind of a science fiction, environmental, romance kind of movie. Matt Damon plays Paul Safranek a man with once bright prospects who is now an under achiever, compared to his peers. He and his wife try and buy a new house but they just plain don’t make enough money to qualify.

This is against a background of a well developed technology of molecular downsizing which is being promoted as the environmentally responsible thing to do. Paul and his wife to check it out and are wowed by how much their limited dollars will stretch if they downsize and live in a dedicated town. They decide to go ahead and do it.

The movie doesn’t get good reviews but I thought it was interesting. Downsizing is just another way of migrating from where you are to where you think the grass is greener. Americans have been doing it for years. In the movie, the environmental impact thing is played up but to the characters greed is the driving force. The opportunity to live in gigantic doll houses that cost a song is the allure. But you know, every paradise has its problems.

People move into their big houses but they don’t want to clean them. Whats the point of having a huge house if you have to clean it yourself? So guess what? there are downsized people who need the money who will clean your house. Where they live is not as not as nice as your house. So we have an immediate underclass.

I don’t want to get all political on anybody but it struck me that many of us would be happy with paradise. We wouldn’t want to emigrate, or downsize just to live in the same kind of house as what we have. We want an upgrade. And we will want  to hire somebody to clean it for us.

So I liked the movie. There is a lot more to it than what I am saying but I don’t want to spoil it for you. There is a flurry of sexual language to the end that I think is totally uncalled for.  Just letting you know. I think Matt Damon does a good job. Like I said the movie is getting mediocre reviews but I think it is worth watching.

2 thoughts on “Downsizing with Matt Damon”