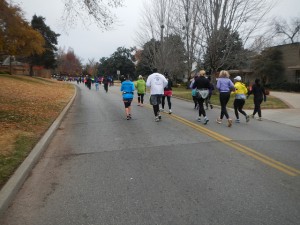 I ran the Half Marathon segment of the Route 66 Half Marathon here in Tulsa on Sunday. Sorry I don’t have too many pics. The temp was about 20 at the start of the race and didn’t get above 30. So at the first of the race while waiting in the “Corral” and at the end my fingers and hands felt like stone so no pics. As I got going my I warmed up and my hands thawed  and I pulled the camera out a few times. 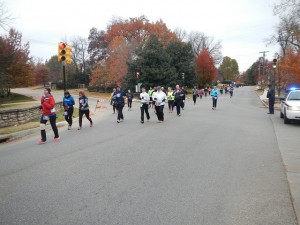 The course started out downtown and wound down and around what is called Midtown in Tulsa just south of downtown and then further south to a funky little area of small houses and cool restaurants and stores called Brookside. From there we got on Riverside drive and ran north parallel to the Arkansas River back to downtown and then finished in and old warehouse area called the Brady District 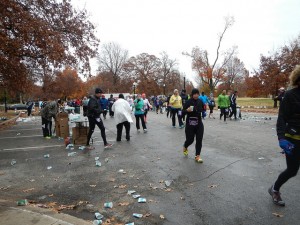 (I am fascinated by water station squalor. Runners are such pigs. Oink, oink, snort.)

At the end of a race I generally circulate around and talk to who I know and see what is going on. Take a few pics, take in the scene. Sunday, nope, too danged cold. I did cash in my two beer tickets at once. The lady at the beer table was impressed as I walked away carrying my two beers and my gear bag wearing mittens. Child’s play is what she doesn’t realize. 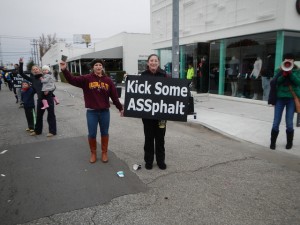 There are lots of signs on the route. Most by family members of runners. “Go Janet!” or “WTG Dad!” Those are okay. I love the Lululemon Girls. Lululemon is a store that sells high end “cute” workout gear. I don’t think that I have any unless Kohl’s sells their label. I do love the Lululemon girls signs.  They have a new store on Peoria in the Brookside area. That ‘s the kind of stuff that they sell in Brookside. I’m not putting it down, just saying. I have bought a few meals on Brookside, but never any merchandise. I’m kind of proud of that actually. 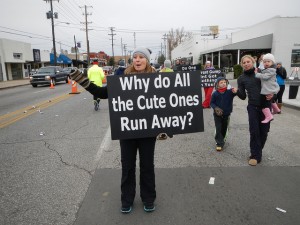 You notice that she is pointing the sign at me right? 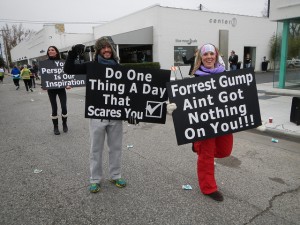 The guy is obviously not a Lululemon girl. I bet his girlfriend is though. He gave me a fistbump. I accepted it reluctantly, just so you know. You see the girl is looking right at me. With that look. You know, the look don’t you? She didn’t offer a fist bump or much of anything else. 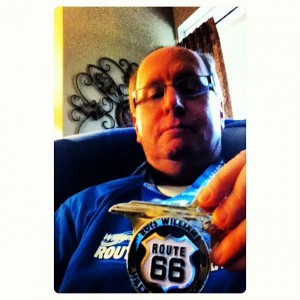 Anyways, I finished the race, grabbed my gear bag with extra clothes, grabbed and downed my beers and made my way to the shuttle bus. It was heated. I didn’t want to get off but I did. Made it home cleaned up before my selfie with the shirt and medal.

Hey when is the next race!!!

Sunday I ran the Half Marathon part of the Williams Route 66 Marathon. It has been since the late 1990’s since I’ve run the distance but I thought I’d give it a try. 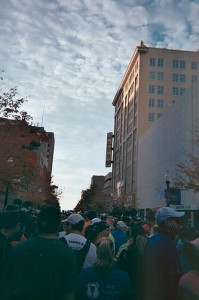 The race had about 6700 people overall. They formed us into groups called corrals. I felt like saying moo several times. They started us in groups also. First time I’d ever encountered that but I’m told that that how the bigger races do it. 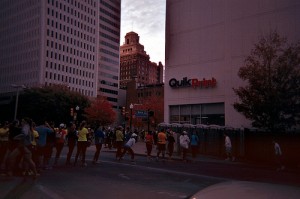 Lots and lots of people had to use the portapotty’s. My office is a block away from the start so no portapottys for me! At the start anyway. 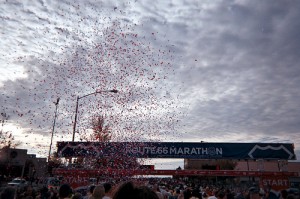 Oops, I digressed, at each start they shot confetti in the air. It was everywhere. 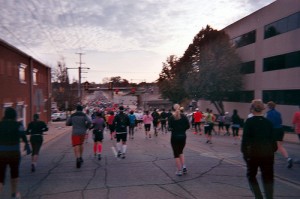 By the time I made the turn onto Cherry Street, I was way behind. Actually that was by design. I decided to run four minutes and walk a minute through the race. I hadn’t trained for the distance so I just took it easy. Makes it easier to take photographs also. 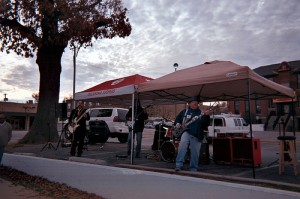 There were lots of good bands on the route playing some solid rock and roll. Flutes and violins are nice but not during a run. 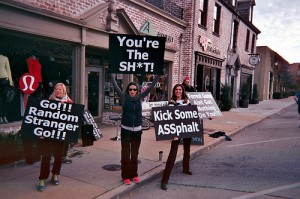 I loved these ladies and their signs. I hope nobody is offended. 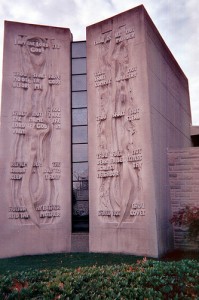 We ran past a local synagogue with reminders of the Ten Commandments. 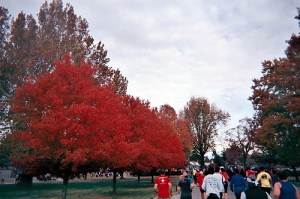 Midtown Tulsa was in full Autumn color mode. It was beautiful. 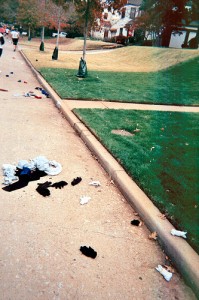 Because it was chilly at the start some runners take clothes they can discard and throw them down on the ground as they warm up. The organizers pick the stuff and it is distributed to those who need them. I hope that the clothes are washed first! 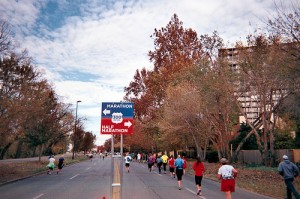 I was worn out as I came to the end of the Half Marathon. I was plum tuckered out. The full marathoners were just halfway. 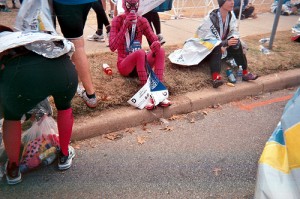 Anyway, lots of fun to be had. I’m doing it again next year.