Tulsa’s AA Level baseball team is the Tulsa Drillers. They are a farm club for the Denver Rockies. The Drillers have played for years at Driller’s Stadium located at the Tulsa State Fairgrounds in an area of town called “Midtown.” It is a nice comfortable stadium with lots of room and free parking. Not much style to the park, but it is a great place to spend an evening watching baseball.

Next year the Drillers are moving downtown to a new Stadium, ONEOK Field. It is being built right now and will be finished in time for the first pitch early April. It is a spiffy looking facility and I’m sure that I’ll come to love it. You can click here and see a live view of the construction of the park. It is a little unusual because it will be facing mostly south rather than east. But I guess that will work. Here is a cut and paste of  the view as of yesterday. 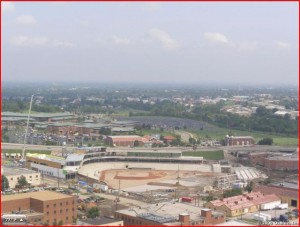 Very cool, you can see the diamond taking shape already.

One of the men in our Sunday School had access to some inexpensive tickets for the last game. So a bunch of us went. First we ate barbecue at the Rib Crib on Peoria. The food was good but look at these motorcycles in the parking lot. I just loved them. 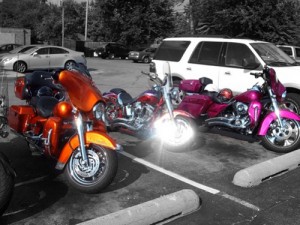 We had the Star Spangled Banner. I hope the the flag at the new place flies as good as this one always does.

We had the game. Tulsa got ahead by 15 runs or so and most of us left. Hey we are fans, but we didn’t think the Arkansas UnNaturals were going to pull it off. (OK, they are actually the Naturals, but I think UnNatural’s adds just a tinge more interest. Don’t you? All them Arkansas boys on those long lonely bus rides away from home and ….) Well, so much for that. This was a church group!!! 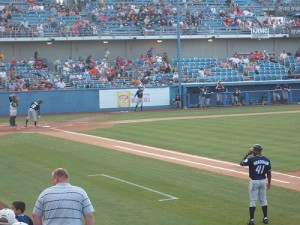 You can see, we had great seats.

On they way out, we had a wonderful sky! 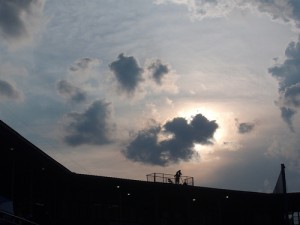 Now, everybody understands I was just kidding about the Naturals, right?