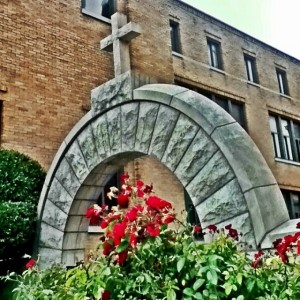 Tulsa’s Holy Family Cathedral is a block away from the office. I walk by it two or three times a week during my noon time walks. I love taking pictures of it. The above is an archway at the side of the Cathedral on a walkway from the street to a parking lot at the back of the Cathedral. I love arches. I don’t know why, I just do. 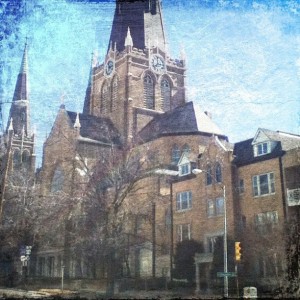 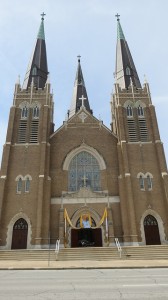 You see one day about two or three years ago at noon I was on the sidewalk in front of the church leaning back taking pictures of the spires of the church and I heard a sharp voice, “May I ask what you are doing?” I looked around and there was a grumpy looking woman looking at me. I said “Well Ma’am I’m taking pictures of this church.” She said, “You know it is illegal to take pictures of a church without permission.” I was like, “Is that right?” “Yes, unless you have permission.” I said, “From who?” She said “From a member of the church.” I said, “Well then I’m good.” She said, “so you have permission?” I said, “Sure do.” “From who?” She asked. I said “He didn’t give his name but I asked him and he said go ahead.” She said when was that? I said last year some time. 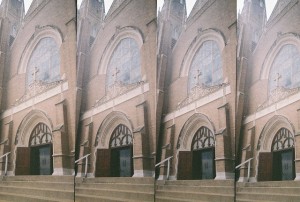 So after some more back and forth she said that she was going to report me. I said okay. I have never seen her again but I always take lots of pictures whenever I get anywhere close to the Cathedral. 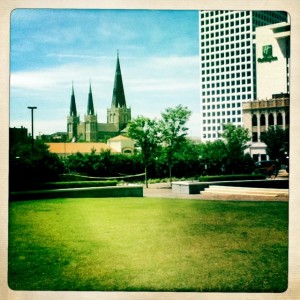 True confession: I lied to her I never got permission from anybody to take photographs of the Cathedral. 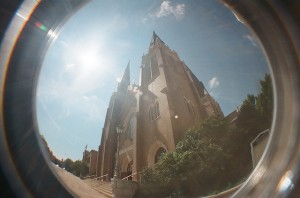 These are forbidden photographs. I’m not even sure that it is legal for you to view them. Do you think less of me? I have a feeling that the church doesn’t care if I take pictures of it or not. I probably shouldn’t aggravate certain members though.

The church was completed in 1914 so 2014 will be the 100th Anniversary of its completion. That is old for Oklahoma.