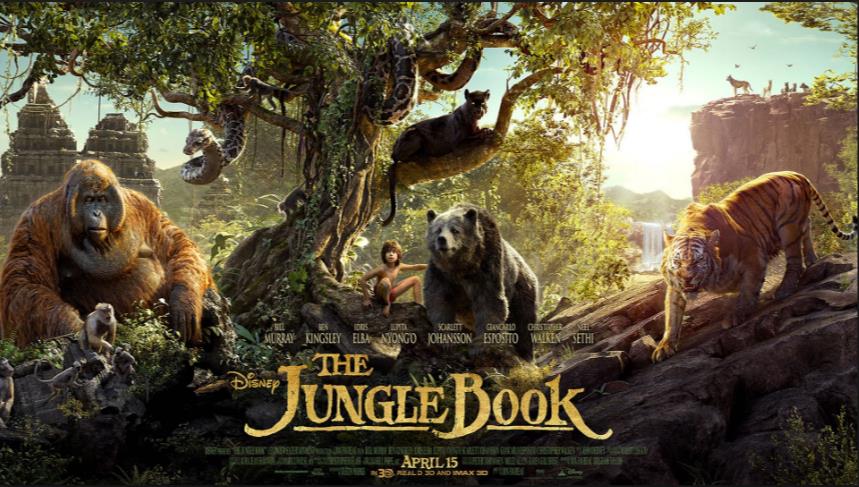 On a cool, halfway rainy Memorial Day afternoon we went to a local to see “The Jungle Book” featuring live action and voices by Bill Murray, Christopher Walken, Scarlett Johanssen, and Ben Kingsley, and a great performance by a young Neel Sethli playing Mowgli. The basic story is that Mowgli is a human boy (“man cub”) raised by a pack of wolves in the jungle after his father dies in an encounter with a Tiger named Shere Khan who was burned and scarred in the fight with Mowgli’s father. By the Law of the Jungle Mowgli is protected until he comes of age. That happens and then his wolf pack sends him to live with humans to protect him from Shere Khan.

So Mowgli heads off to the man village with the aid of a black panther, Baghera, and Balou the bear. They have a lot of adventures with with monkeys, a snake, elephants and my favorite character, a big ape named Louie.

There is a couple of great musical scenes with Balou and Louie. I found the movie totally absorbing. Just don’t ask too many questions such as how come the wolves, tigers, panthers, and bears can talk but monkeys and elephants can’t. Just go with it is what Heather says.

So the movie is a lot of fun. Check out its web site. Lots of good info and videos there. Take the kids, buy some popcorn and relax.

One thought on “The Jungle Book with the Voices of Bill Murray, Christopher Walken, and Ben Kingsley”