“….miles to go before I sleep….” by Trail Zombie is one of my favorite blogs. TZ runs incredible distances most of it on trails. TZ runs marathon and longer distances (ultra Marathons). He runs at all hours of the day and night. He probably runs more miles on a weekend than I do in a month. He belongs to the local trail running club, TATUR, and helps mark the courses for the races they run. TZ makes the races sound fun so I decided to do their next one, the Turkey & Taturs Trail Race held Sunday. The race had three different lengths, 50K (30.1 miles, longer than a marathon which is hair over 26 miles), 25K (15.5 miles) and 10K (6.2 miles). Wimp that I am, I chose the 10K race.

I have run in lots of road races. I’ve done two marathons, two half marathons, a 20K race, fifteen 15K races, and a whole boatload of 10K, 8K, and 5K races. They are fun, but I’m always looking for something different. The trail race was different.

First, there are not that many people which makes it less of a mob scene, second it is pretty much an event for the 40 and over crowd it seemed to me, and second the route is very primitive. (That is why they call it a trail run, duh). Third, you can wear headphones and listen to music (Yea).

Here is a map of the course. 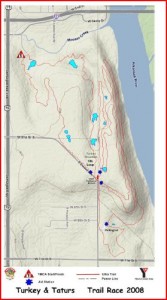 The course is the thin red line. The 10K basically was the top half of the map. You can see the course twists and turns so much that the map is useless. Turkey mountain is laced with dozens of different trails and hundreds of different trail combinations. If you get off course, you are toast. After just a half mile I was running by myself, so I kept a sharp eye for the pink ribbons marking the course. It would be easy to get off course and if you do, you are lost, you are so turned around it would be difficult to know where to return to the start.

Just to add to the fun, it started sprinkling just before the race and it turned into a full blown rain later on. It was not cold and I was wearing technical fabrics  so that wasn’t any big deal and it wasn’t lightning, which would be the deal stopper for me. The course web site said they wouldn’t cancel the race for rain anyway. I think these guys like rain and mud. It was kind of fun, running through the woods splashing through the puddles with abandon.

Here are a few pictures I took during the run. 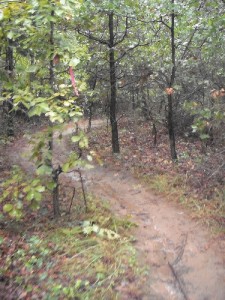 Let me tell you something I learned about the brown mud. Its slick as snot so I picked my way carefully through it. I got passed by runners doing the 25K race and they would just fly on past, as did a couple of grandmothers and a great greandmother on walkers. They can be pretty rude with their little bells. 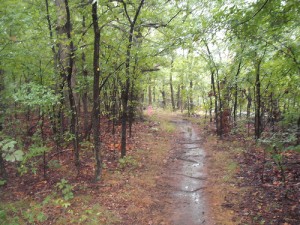 See the darker mud, it was pretty slippery so I had very slow going on it also. 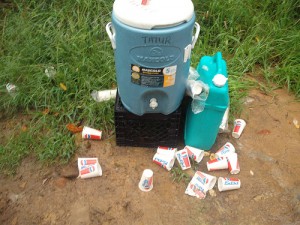 This is a water station about halfway through the race. See all those cups? I think it means that I’m not in the lead. I blame all that brown and black mud. 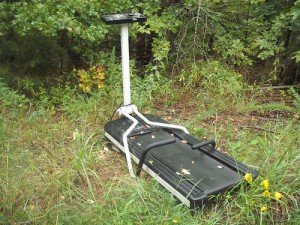 I wasn’t getting my heart rate up enough on the course, so I stopped and did a little workout on this treadmill so I could stay warmed up. (Not really). Why the heck do people pick city parks to dump their trash? I award the people who dumped this here a poop hat award. If you live in Tulsa and have a large object you want to get rid of, you call the city and they will come get it. No cost, no questions. You don’t need to dump it in a city park!!! Good grief folks!!! 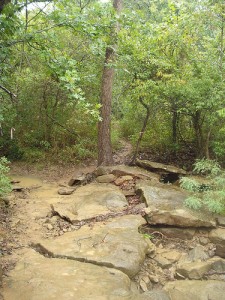 Lots of rocks on the race. They were very slick when wet so I went over them slowly to avoid hurting myself. 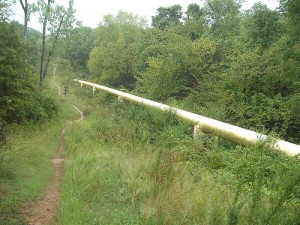 A sight to warm the heart of a crusty gas guy. A big inch natural gas transmission line running alongside the trail. Wow, that got me all inspired!! The line must have been laid along time ago. Now days they wouldn’t span a little creek like that. All the bubbas of the world like to shoot at them with their deer rifles. You say Turkey Mountain is a park there is no hunting allowed. I would say, if there are deer (and there are, I’ve seen them) then there will be hunters of those deer. (I also think that 99.99% of deer hunters in Oklahoma strictly obey the various laws regarding their sport.)

I didn’t get a picture of it but finally ran into some good running terrain. Lots of nice grass right before the finish. I have learned over the years to be running hard when you make the final turn to the finish line. You have to finish with style. If you cannot finish with style at least finish vertically. I did my best to ignore the knowing smirks of the grannys that passed me earlier. I think they cheated, I know they did!

And now for my lady readers, a little beefcake. Control yourselves, I’m a married man, not available. Sorry. 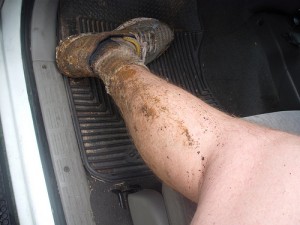 Running in the mud is fun!!! 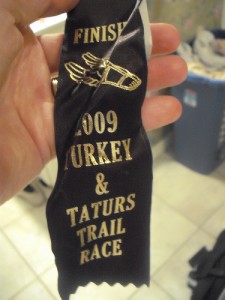 But you know what the important thing about racing  is? The physical and mental challenges, communing with nature, rocking out on the headphones to the like of Metallica and Patsy Cline, becoming one with the universe, exploring the inner realms of your outer consciousness (or is it the other way around?)? No, none of that.

The most important thing about racing is: 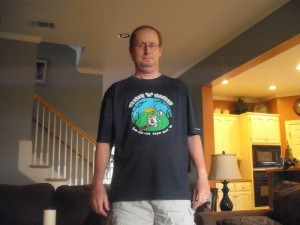 I had lots of fun. I didn’t get to meet Trail Zombie but I will because this wasn’t my last Trail Race!

(Everybody knows that I made up the bit about the grandmother’s right?)