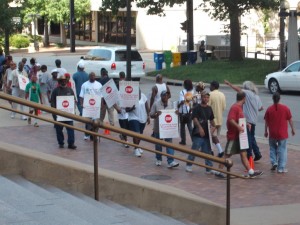 These Millennials flooding the workplace are something else. They know how to work in groups, they are technologically adept, work hard and are eager to learn. They have also had their butts kissed since birth and like it. And we Baby Boomers love them. They are our kids. Generation X’ers apparently hate them, but I’m not going to get into that!

Millennials don’t know everything, I have proof! Some things have to be explained to them. For example here in Tulsa the local Carpenter’s Union (Local 943) in conjunction with their parent organization (Arkansas Regional Council of Carpenters) is in a two year campaign to force a local contractor, Green Country Interiors (“GCI”), to convert to a union shop. They are doing this by picketing jobs that Green Country Interiors are working on now and businesses that have used GCI previously. The Union is even picketing the entrance to the neighborhood of the president of Green Country. I give this as a little bit of background.

The Union has outsourced the actual picketing to homeless people who get $10/hour and no benefits. Brilliant! I think the problem may be that actual carpenters are actually working and may not be too excited about taking off work to picket. So outsource the labor. Way to go local 943. Turn the tables! Out of box thinking.

My employer has hired a bunch of new college grads each of the last several years. One of our selling points is our extensive training program. My part of the training program is to sit them in a conference room and bore them past tears to total despair as I drone on … and on. However, I do wake them so we can go to lunch, (because I’m nice guy). As we were walking to the restaurant we passed the picketers who were marching and chanting. The Millenials asked what was going on? I summarized the above. They asked “So these homeless people want to go to work on the building?” Oh, no, I don’t think that is the plan at all, I told them. The Union wants GCI to be a union shop. That way GCI’s workers will become union employees. “What about the homeless people?” they ask. I say, “What about them?” I tell them maybe the homeless folks can take their newfound picketing and chanting skills and go to work for the iron workers or something. Or more likely they stay homeless.

These Millennials who are supposed to be so smart couldn’t figure any of this out. They don’t think it makes any sense, further they don’t think it is very fair. That is why companies will need old crusty guys like me to keep stuff like this all sorted out. Or at least that is what I tell myself.

4 thoughts on “Millennials, a Carpenter’s Union, and the Homeless. Explained by an Old Crusty Gas Guy!”