As some of you know I am attracted to cheap offbeat cameras. My latest project is a pinhole camera that my Mother in Law gave me. I posted a few pics yesterday.

As much as I enjoy that camera and as much as I plan on using it some more I have my sights set on something even more ambitious but still relatively inexpensive.

I subscribe to National Geographic and a few months ago they had a photo spread that blew my mind away. It was photographs taken by a man named Abelardo Morrell and he used a “Camera Obscura” to take the photographs. A Camera Obscura is a fancy name for pinhole camera except in this case he used a tent as a camera and a periscope as the “pinhole.”  On National Geographic’s web site they showed some photographs he has made where he used hotel rooms and other small rooms as his “camera.” 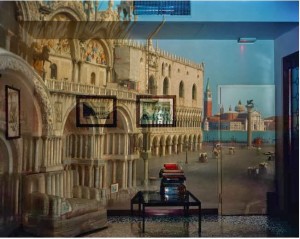 The above for example is an image of St. Mark’s Basilica that is projected onto the wall of a study in a building across from the Basilica. The study is totally blacked out including the windows with just a hole about the size of a dime being the “pinhole.” Of course you have to use a regular camera to photograph the photograph so to speak. Abelardo used a small lens to flip the image to “right side up” since a pinhole camera shows a flipped image. 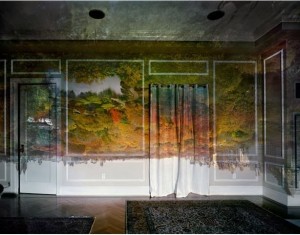 This is an image of Central Park by Morrell showing the upside down image.

And the following is a video put together by National Geographic showing how they made their own “room camera.”

So my next project is to make a room size Camera Obscura. Our house has an open floor plan plus lots of windows and I don’t think that Heather would appreciate me turning one of the rooms into a camera. We actually have a couple of rooms that would work except they don’t look over anything besides a picket fence in our side yard.

So I have fixed my sights on a hotel room in Dallas in April. I’m attending a convention there and I have already made my hotel reservations. It will be on the 37th floor of a hotel downtown. So, unless opportunity presents itself somewhere else that is where it will be.

Of course I have a few things to work out. First off of course is that my employer sends me to conventions to work and learn not build room size cameras. Plus I’m not sure how the hotel feels about it. Can you imagine the maid opening the door and seeing that I have overlaid plastic over the windows except for a small hole? They might want to discuss the situation. Plus I’ll have to have mastered my “good camera” for low light. long exposure because what the naked eye sees is really very dim.

So whaddya think? Am I off my rocker? Should I go for it?

I think it will be fun. I just don’t know how I’m going to bring the camera home with me.

Abelardo Morrell website Check it out. The man’s creativity is awe inspiring.