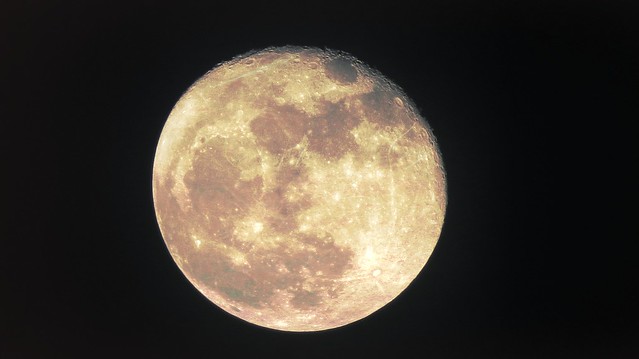 Here is my Super Moon photo!! Actually I was a day late. I flew up to Idaho to visit my Dad in his Assisted Living Center and I neglected to take my moon camera. So I took this the day after the Super Moon Full Moon so I was close. I have a Canon SX40 SuperZoom and boy does it take great (at least I think they are great, okay) moon shots. I used to use a tripod with it but now I just hold in my hands on the auto setting a let her rip (as we say in Oklahoma). And if you know me, you know I cheated. If the skies are clear I haul out the Canon every time the moon is full and take a few shots . Of course the moon being the moon it doesn’t ever change much so I could really be cheating on this. But you know that I would never do that. 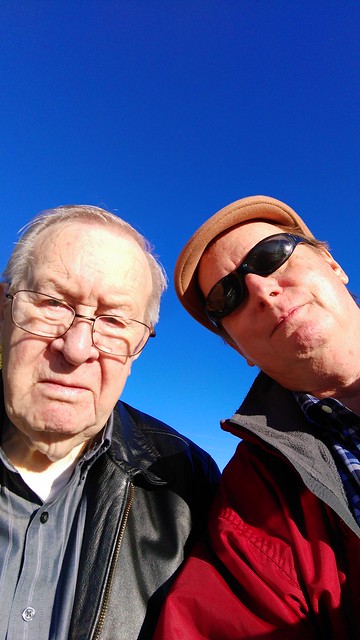 Dad and I. I think this is like his third or so ever selfie. He has a lot of catching up to do. Not that he feels the need for it. He doesn’t understand why everybody spends all their time looking at their phones. 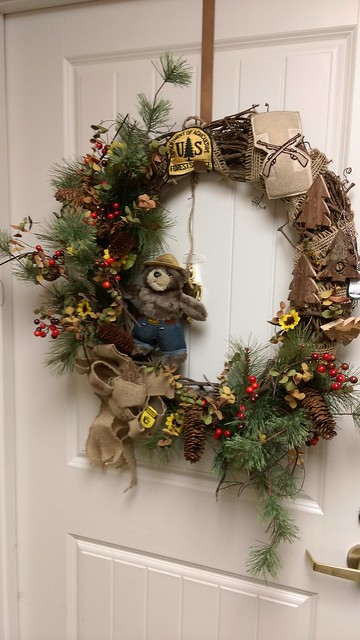 This is a door wreath that my sweet, crafty, and considerate sister Ellen made for Dad. If you look closely at his US Forest Service Arm patch from his uniforms, a Smokey Bear, and a University of Idaho rifle team patch from his letter sweater. Dad had to drastically downsize when he moved early this year and Ellen was able to recycle some of the items into this wreath. 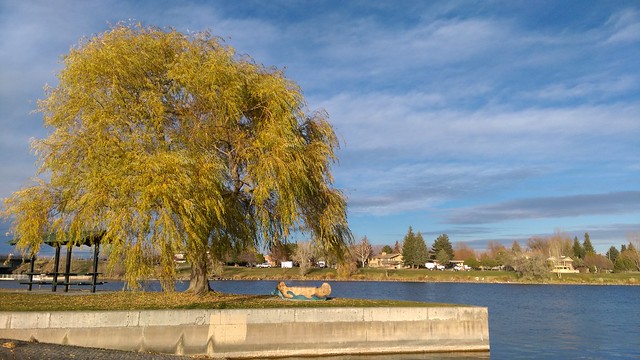 I took a run on Idaho Falls’ river trails. It was ridiculously warm while I was there but is frosty now. Just so you know I’m going to recycle this pic at some point in the future. Idaho is just so beautiful!

I stayed in a separate room at the Assisted Living Center. I think he is in a good place. The staff is very nice and very patient and they know everybody. The rooms are nice and the food is pretty decent. They have lots of activities planned and a couple of vehicles to get everybody to their doctor’s appointments and shopping and such.

The Falls that give the town its name are very dramatic. I never get tired of going to see them.

So we had a good visit. I got him to go to an exercise class and we both had a great time. The two instructors were very nice and inclusive and very supportive and the other students were having a great time so hopefully dad will go back. 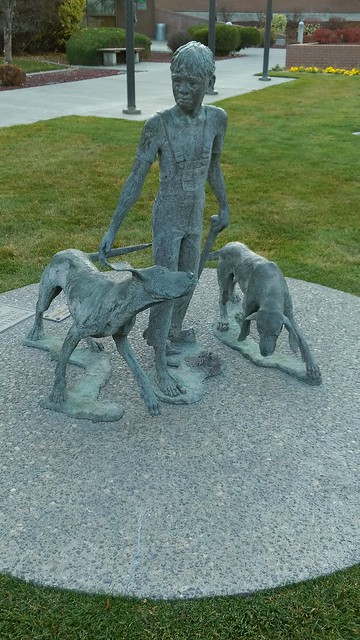 A cool link between Idaho Falls where my Dad lives and northeast Oklahoma where I live is that Wilson Rawls, who wrote “Where the Red Fern Grows” wrote it while he lived in Idaho Falls. He and the book are celebrated with this sculpture in front of the city library.

But I didn’t take my camera so I took the pic of the moon after I got back to Tulsa.

18 thoughts on “Skywatch Friday – The Super Moon a Day Late”