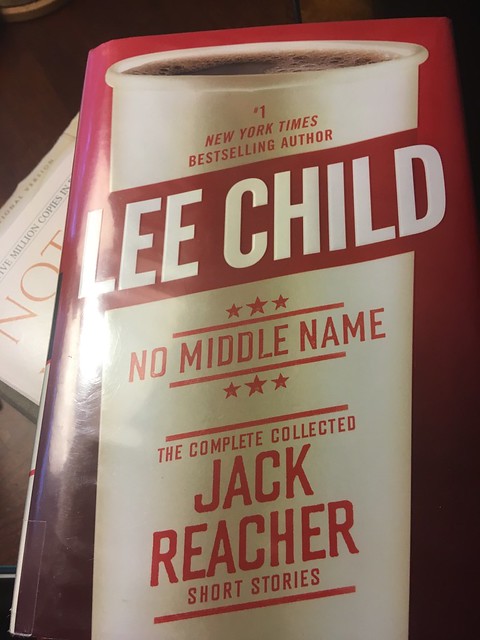 No Middle Name is a collection of short stories featuring the thriller superhero Jack Reacher. The stories are satisfying for the most part with no big surprises except for a couple of them that feature Reacher as a teenager. One in particular is over the top. Spoiler alert below.

A young sixteen year old Jack Reacher finds himself all by himself in New York City back in the 70’s one night and quite a night it is. Let me see, what happens. Well he goes to a bar and just sits down with a table of four college coeds. One of the coeds decides to take young Jack to a concert with her as protection. The same night the 16 year old Reacher rescues a female FBI agent by slapping a top mafia guy. The mafia guy tries to get revenge by getting a bunch of his friends to teach young Jack a lesson. Well that didn’t turn out very well for the bad guys. The same night, the college coed has Jack show her how much he likes her and she was so gratified that she decided to return the favor. (The weird part, she committed a felony twice with young Jack as the victim, but I digress) Anyway while she is showing Jack her appreciation do you think he is distracted. Oh no, he is not. He sees a guy sneaking up on them with a gun and determines it is the Son of Sam killer that was terrorizing New York at the time. Young Jack being the nice guy he is doesn’t interfere with the coed and waits until after she is done before he tells here what he saw. He ends up telling the FBI agent about the mass killer but not about the child rapist coed Reacher is hanging with.

It was quite a night for young Jack. Raped twice and finds the Son of Sam killer. Sorry if I offend.

I confess that I didn’t read all the stories. I will say that I read enough. Got my copy at the library. You want to know what is strange. On Amazon you can get the hard copy for half the price of either the paperback or the Kindle version. What’s up with that. Any publishing industry mavens out there that can explain that?