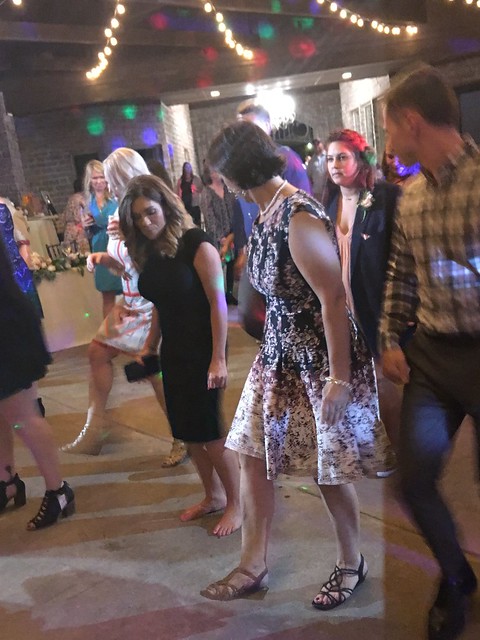 My last post was about a wedding we went to, this is about the day after.

I wake up earlier than everybody else and sure I drink coffee and read the paper but I like to get outside and I didn’t feel like running so I went geocaching. 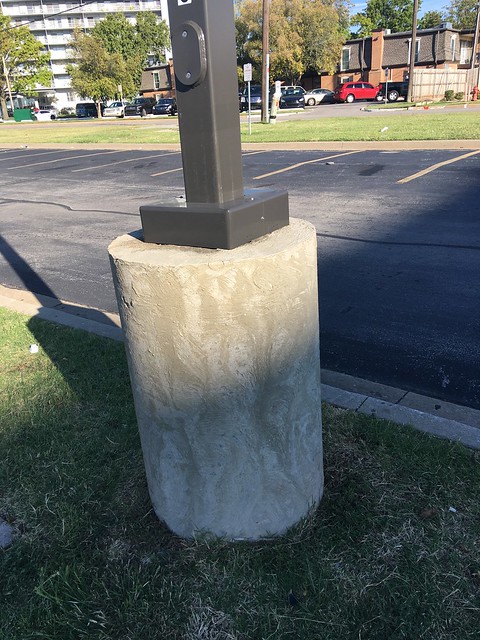 A simple type geocache is a skirtlifter. Located on the skirt on a parking lot light. There were two close to our hotel so off I went to find them. 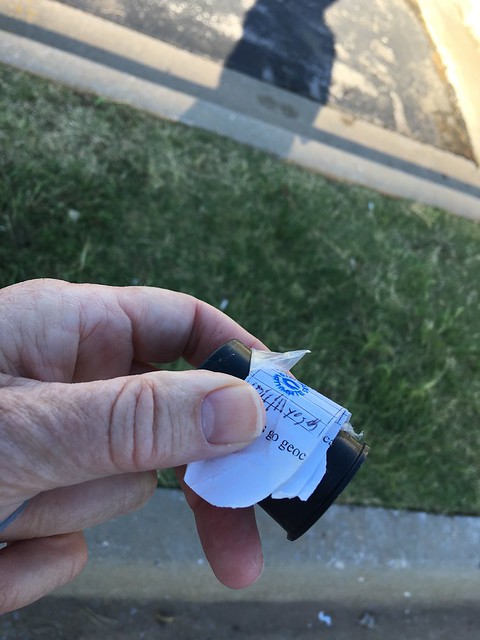 The caches have little paper logs that you sign to prove that you were there and also a separate web page that you “log” to show the world that you found it. Check out geocaching.com for more info. 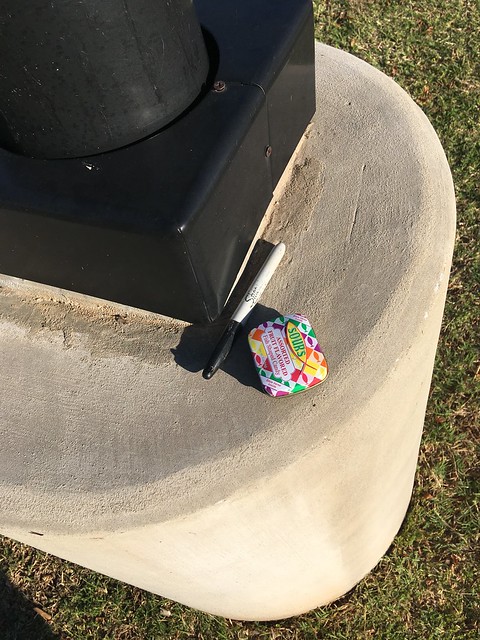 Some of the containers are pretty small. Plus under one of the caches I spotted a black widow spider. 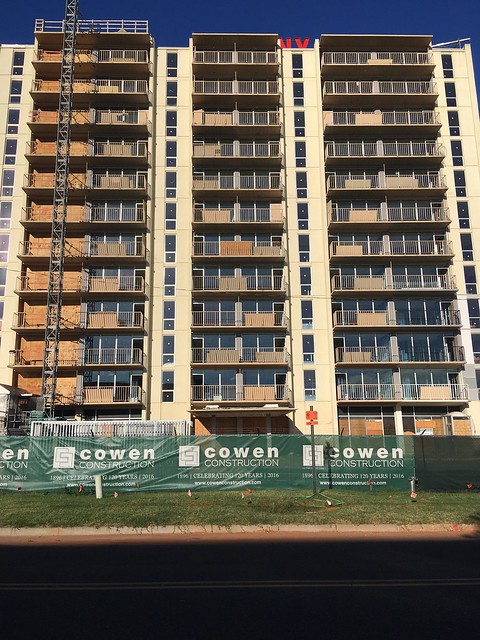 Who would of thought that high rise apartments in Oklahoma City would be around enough to need renovation.

You are saying, “Hey this a Skywatch post, where is the sky?” Right here, behind this architectual gem. I don’t know whether this is mid century modern or Googie or what but I think it is beautiful. It is also empty, but seems well cared for. I love those arches with the cables. I am thinking this used to be a bank. 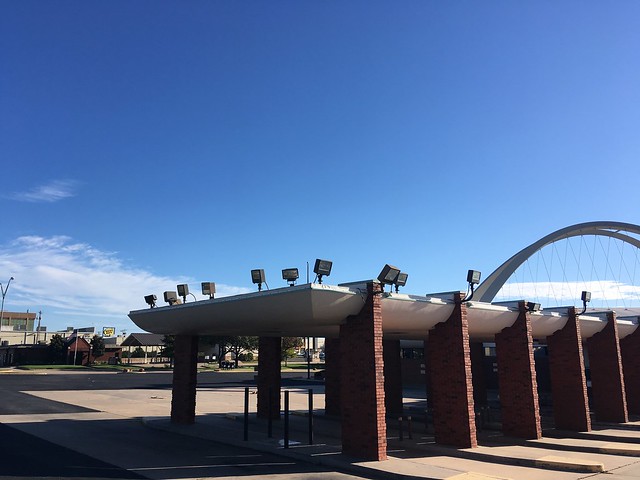 This is the back side of what I think is a bank. I don’t know about you, but I really think they should install more lighting. Eleven lights is just not enough. 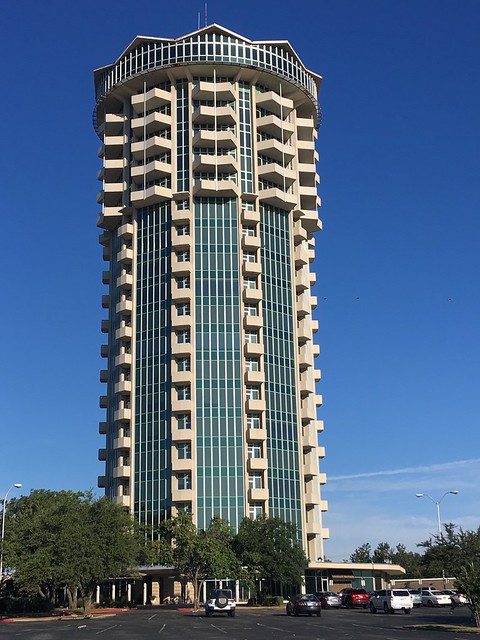 And this building is a special place. This is Founders Tower and there is a restaurant at the top that rotates and that is where Heather and I had our first date back in the 80’s. It was called the Eagles Nest then and now it is called 3sixty restaurant and bar. We had a great time. Or at least I did.

It is also and office building. The oil and gas industry at a certain level is almost a barter economy. You have geologists, landmen, and reservoir engineers who will work for an interest in a well rather than cash. Lots of those guys used to have offices here.  That was back in the day when you could drill a vertical Redfork well in the Anadarko basin for “only” $1.5 million. Nobody does that any more. Now to drill and frack a horizontal Woodford Shale, or STACK, or SCOOP or other shale well is going to cost you $10 million. I have had customers with a straight face tell me about “pilot projects”  with seventy such wells.

The technology invoved used to be almost generic but now the players keep their secrets very closely held. I am out of the game a little bit now but I wonder how the barter economy has survived. As Alan Jackson says, “the big money has come to town” or something like that. 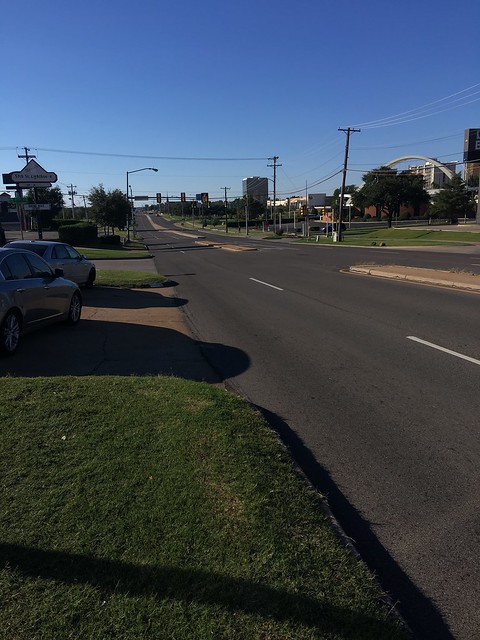 And then back to the hotel. Notice the pedestrian friendly streets in Oklahoma City. I’ve always loved Oklahoma City for its pioneering boom and bust attitude.