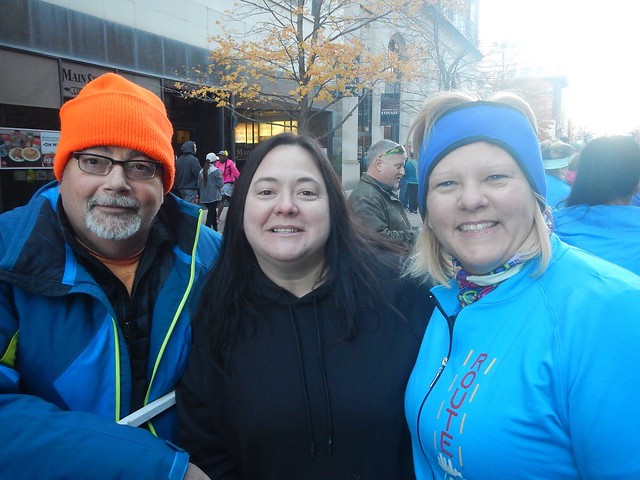 I ran the Route 66 Half Marathon this past Sunday even though I wasn’t really ready for it. I ran a longer race previously, the TurkeynTaturs 25K and my right knee ended up being a little tweaky. Kneee tweakiness of any sort is not good for running, especially long distances. Oh well, I paid my money and by gum I was going to run it. Worst case, I would walk it. I had company this year for a good part of the race. From right to left above is Rick, Misti, and Paula. Rick is Logan’s former Den Leader in Cub Scouts. Rick is one of the world’s good guys. On the left is Rick’s wife Paula. I don’t know her as well, but if Rick likes her she is good people. In the middle is Paula’s friend Misti. So I walked with Paula and Misti off and on during the race. It makes a big difference I found, racing with company. Maybe we can do it again. 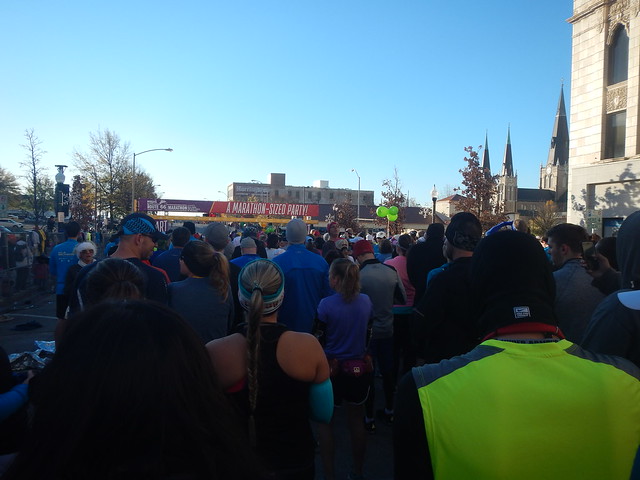 The Half Marathon people like me, Paula, and Misti started with the Full Marathon people. I don’t know how many people there were but it was considerable and so we started in “corrals” we were in the last Corral, Corral D. There was about five minutes between corrals so we were blocks back from the start of A and it was twenty minutes before we started. It’s all good though.

And so finally we moved up and the gun went off and then the confetti canons started and so off we went. 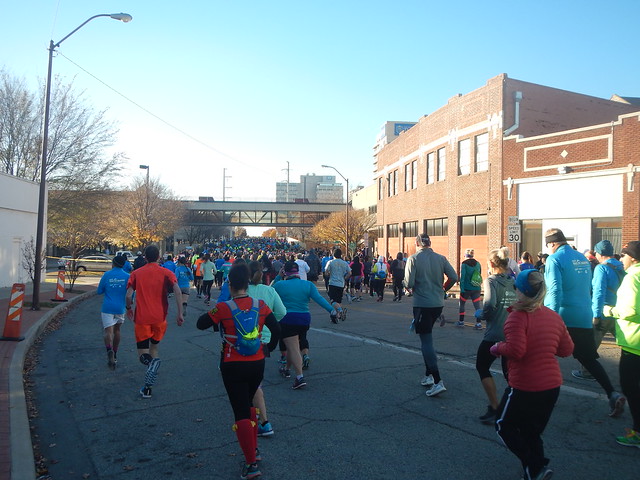 Paula and Misti trotted off and I hadn’t warmed up my knee (mainly because I had 13.1 miles to get warmed up)  so I walked. It felt funny getting passed by everybody but experience told me that I would be passing a few of them back later on. 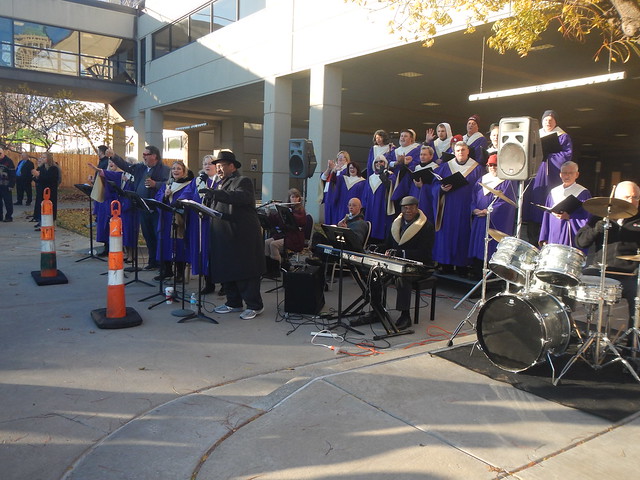 We ran by the First Methodist Church and they had their choir out rocking and rolling doing their best to entice us pagan, heathen, runners off the streets and into the pews. I didn’t see any takers. I heard that some of the choir threw off their robes and entered the race endangering their eternal souls. 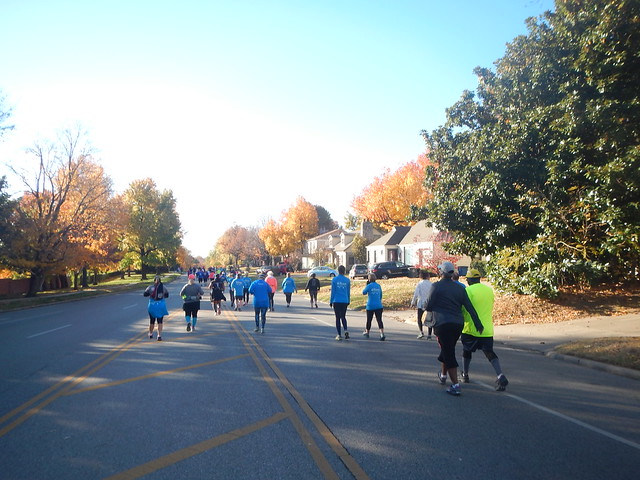 Soon, we entered midtown. A beautiful part of Tulsa especially in the Fall. AFter a little while I caught up with Paul and Misti and we walked together for a ways. 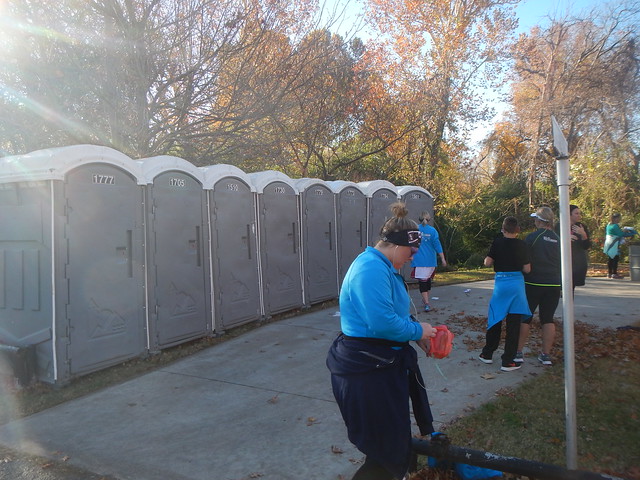 The first set of porta potty’s were only a mile or two in the course and they had a huge line. I thought, seriously people? But sure enough after a while, I was getting a little antsy and was evaluating my options, which are not much in the tony neighborhoods of midtown. Then when we were going through Hogwarts, I mean Cascia Hall prep school, these popped out of nowhere with no lines!!! Boy was I glad to see them. 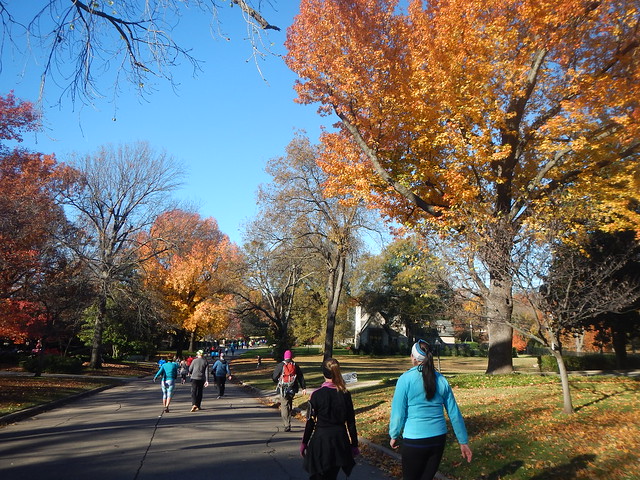 And afterward I caught up with Paul and friend again and we walked some more. 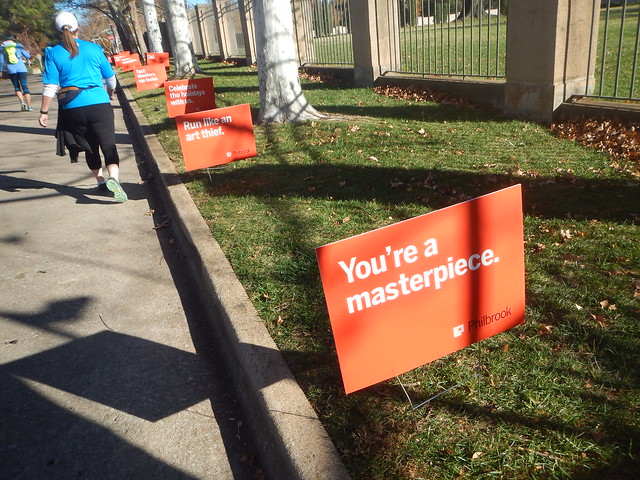 We went by the Philbrook museum who had signs out. “Run like an art thief” is my favorite. I think it would be cool if the race diverted into the Gardens of Philbrook for a little bit. 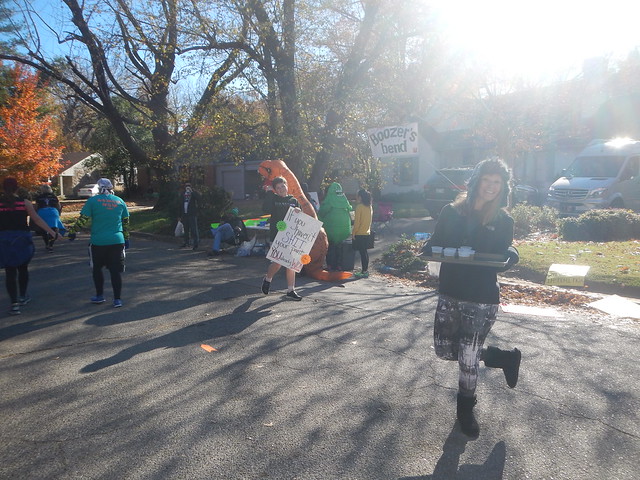 And then later on, at a “Bandit” (Non official) aid station, I had my first jello shot in my life. Can’t say that I liked it. I chased it down with a beer. 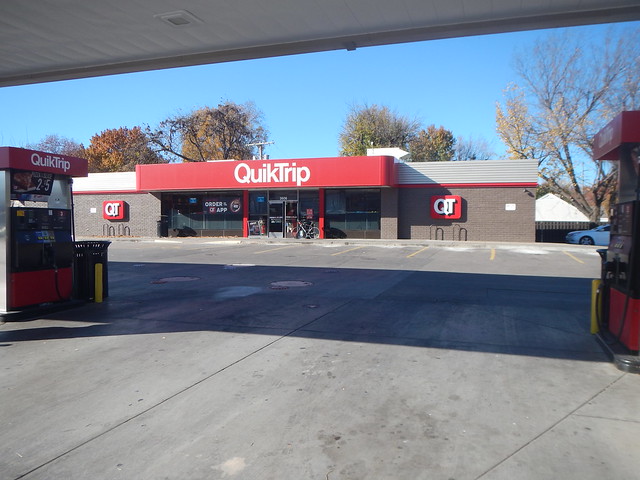 And then I was back to evaluating my options again when I saw this Quik Trip on Peoria. I made a little detour off the race course, which I am sure is going to keep me out of the next Olympics but at least it stopped the evaluating.  It was kind of unfair though because the men’s room was empty and there was a line for the womens room. I told them that they just needed to post a guard and take over the mens room also for their own use. They looked at me like I was Judge Roy Moore or something. Oh well, I had seen people doing similar things elsewhere. 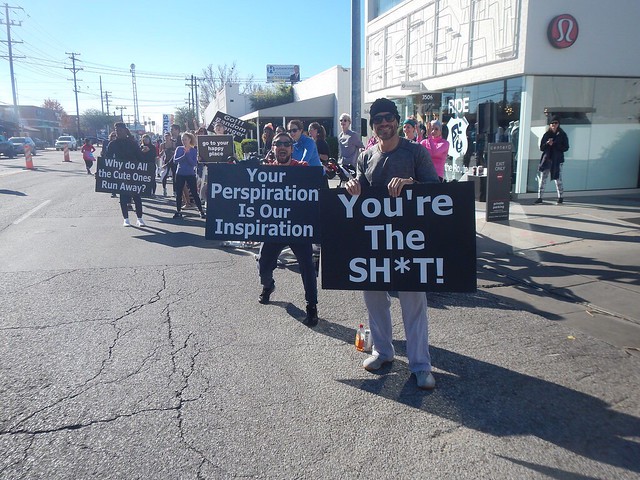 I always love the Lululemon guys and gals. They have a lot of fun with their signs. 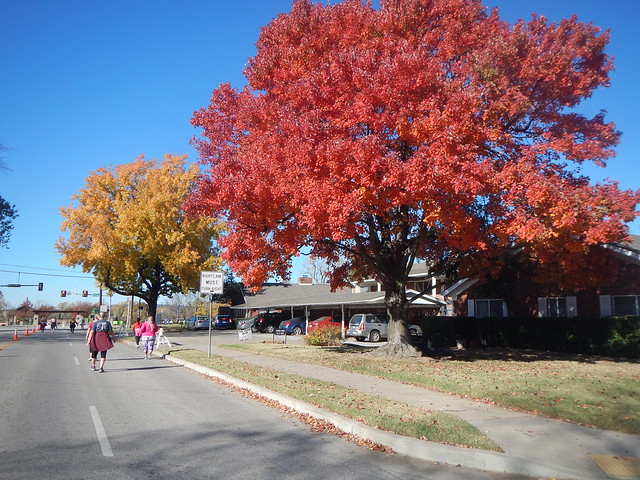 We went down Peoria, and turned the corner on 41st street and went west to Riverside Drive and then north. Well past halfway and headed back downtown so I knew that I was going to finish, tweaky knee and all. I had been trotting and walking but the trotting ended about a mile past the time we got on Riverside. I was really loving the Fall foliage. 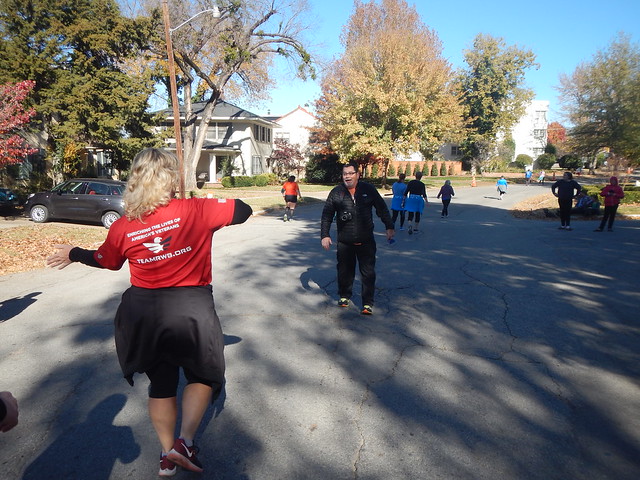 We nosed back into the neighborhoods at some point and I found Rick. He was driving, staying ahead of Paula just to check on her. But while he was waiting he was encouraging everybody and talking with people. I had lost Paula and her friend at Woodward Park. 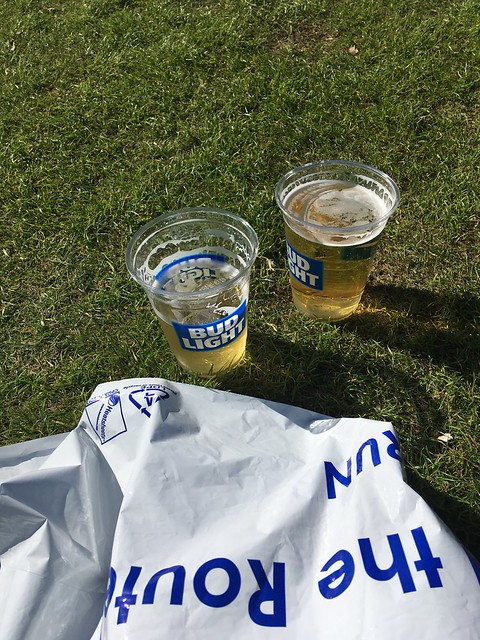 Sorry, too tired to take pics the last five miles or so. So I made it to the end, got a couple slices of pizza, got my space blanket, a bottle of water and my two beer ration and then sat on the grass at Guthrie Green and rested. 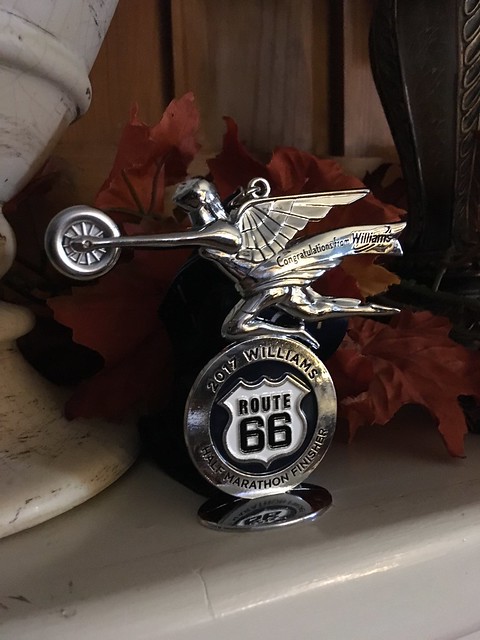 The medal they gave out. Very cool, I loved how they put a base on it. I put it on the mantle last night and Heather hasn’t taken it off yet which means she must like it or hasn’t noticed it yet. She does have a good eye for things. Every year I try and put the Dallas Cowboys Star on the top of our Christmas tree and it stays up there for an average of oh say, 15 to 30 seconds. 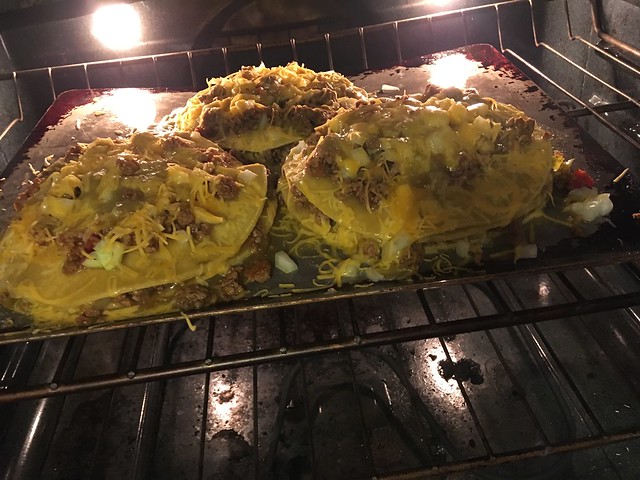 Tell you what though, she made us stacked enchiladas for dinner. That is a New Mexican way of doing things, with green chili. Doesn’t get better than that.

Thanks to the organizers of the race. I cannot think of a thing to do to make it better. The race is perfect, the route, the water stops, the runner expo and the smooth process to pick up the race packets. The finish, with ample water, food, and other refreshments, the entertainment, the web site, the fast results. It is all great. Thank you also to the army of volunteers that made it work. The many neighborhood bandit stops and other bandit stops especially the Runners World stop on Peoria. The police and sheriff’s departments that kept the course clear. And everybody else involved. Great job.

And thank you to my fellow runners who made the race fun and all the residents of the neighborhoods who were stranded for the better part of a Sunday and endured it with good humor and cheered the runners on.

it was great, I’ll be back.