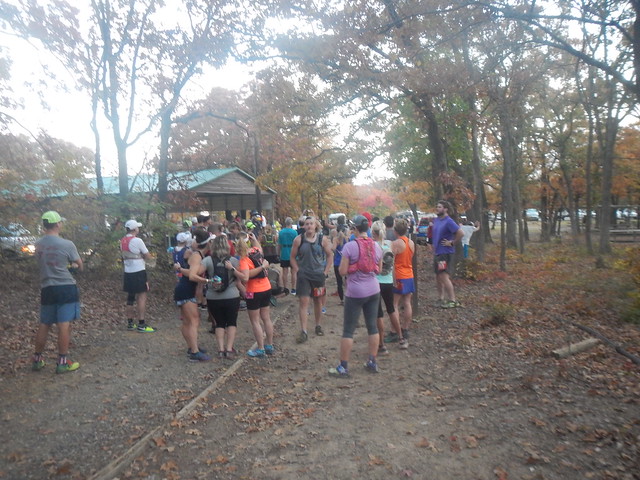 I love how everybody mills around before a race.

Turkey n Taturs on Tulsa’s Turkey Mountain has to be one of the oldest trail races in the area and the most handy being right in Tulsa. It was my first trail race in 2009. I was not very familear with that style of racing nor Turkey Mountain and I was bewildered by how you run a race on narrow trails and was totally lost on the mountain. If it were not for the great marking I would not know where they heck I was or where to go. It was my first trail race and I have run it several times over the years. It has lengths of 50 kilometers, 25K, and 10K. 10K to the hard core crowd is barely a fun run. Somehow I felt the need to try the 25K even though I had not trained for it. My plan was to walk the rocks and uphills and trot the flats and downhills and not worry about my time. I knew that it could take me a long time.

So I got to the back of the crowd of the race. One thing I love about trail races is that there are not that many people in them and everybody is very nice, no pushing and shoving. It is a very friendly crowd and very accepting of newcomers. They asked how many people were in the first trail race and a bunch of people raised their hand. So the fun goes off and off I go!!  I love how the women turn around and give me a look after the gun went off. 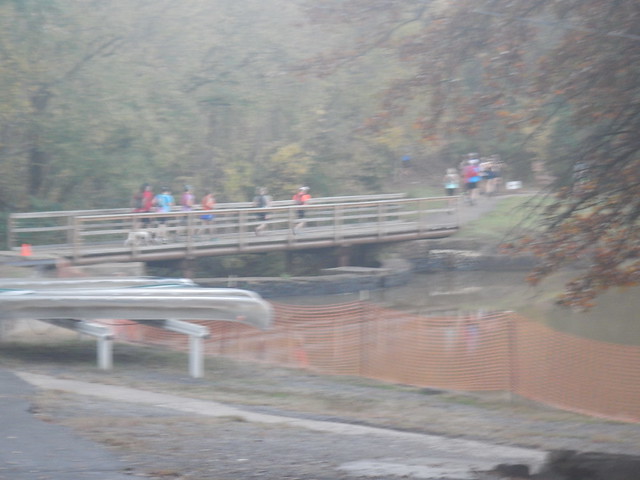 I went running with the rest of them, and then it was like. Wait, the plan, the plan. So I stopped and started walking and let everybody go on ahead. And I strolled along. I hadn’t warmed up or anything and I wanted to walk a half mile before running so that is what I did. 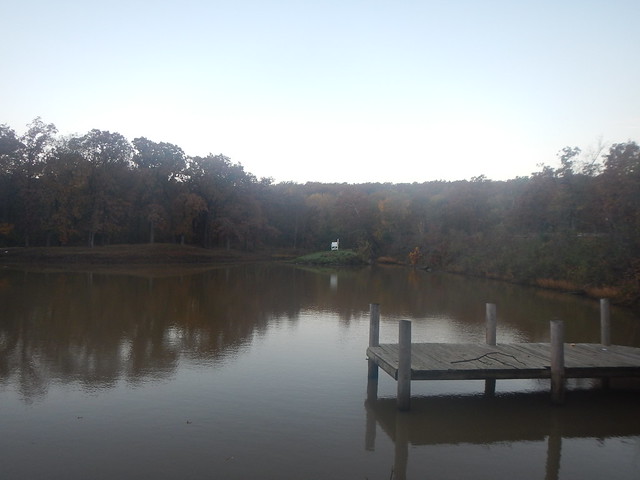 Lake Logan at the West Side Y. A little muddy but beautiful. 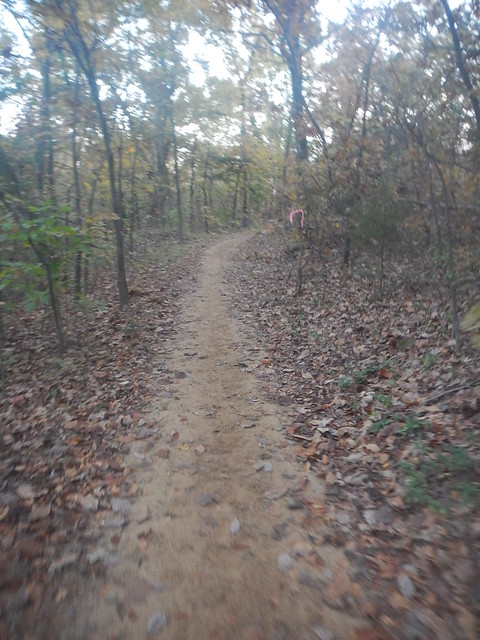 So after a half mile I started trotting and walking at regular intervals, especially walking the rocky areas. I fell on my knee about two years ago and still feel the aftereffects of that so I tiptoe when I am around the rocks. 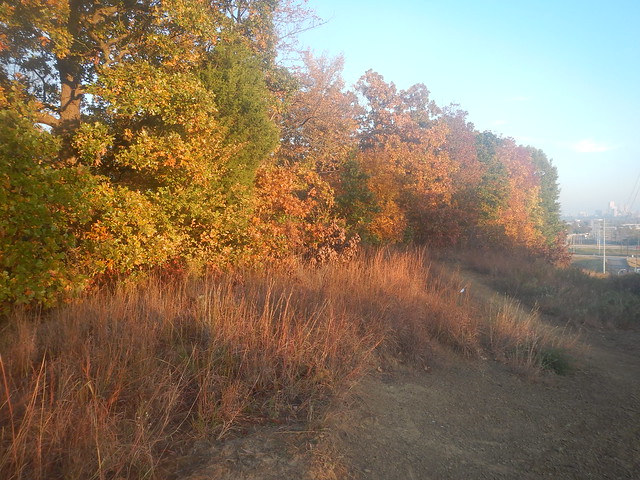 I made it up to the upper parking lot and stopped for a little refreshment at the aid station there. Trail Races have top notch aid stations. Lots of water and gatorade, salty snacks, sweet snacks, cookies, sandwiches. They also pretty much had a full bar. If I was just doing the 10K I might have had a beer or a shot, but not for 25K (which is over 15 miles). I drank a ton of water the gatorade. Had some of the baked potatoes rolled in salt, pretzels, and some other snacks. I also carried a hydration pack with 1.5 liters of water that I sipped on periodically every so often. One thing I’ve learned over the years is that dehydration is a bummer and it can happen even in cold weather. 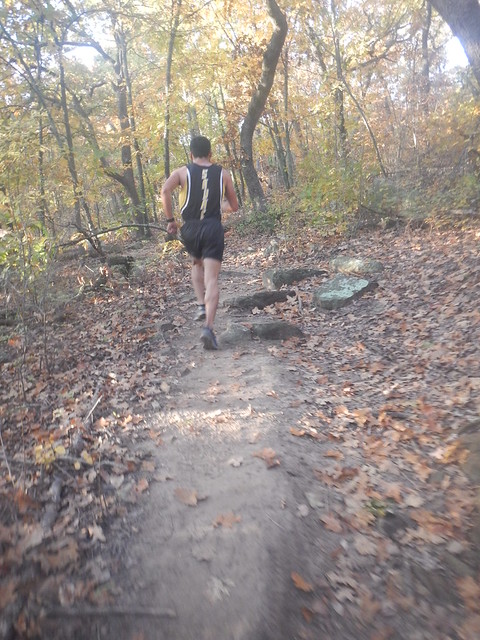 My race started at 7 am. The 10K started at 7:30 am and I started getting passed by the 10K guys before I got too far. Those guys were flying. 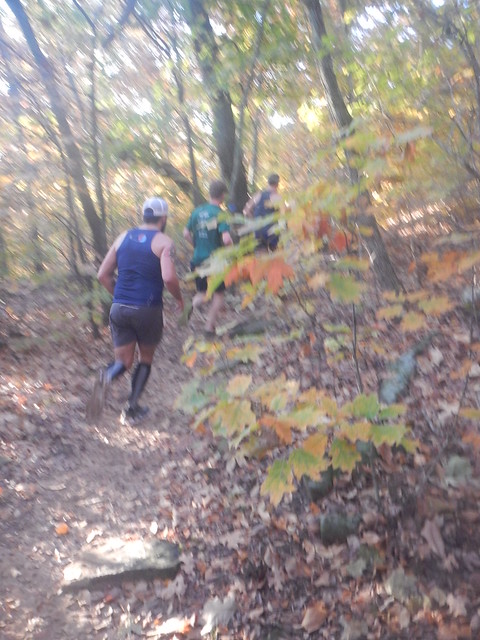 After a while it got to be a regular processing. Life is humbling being a slow plodder. 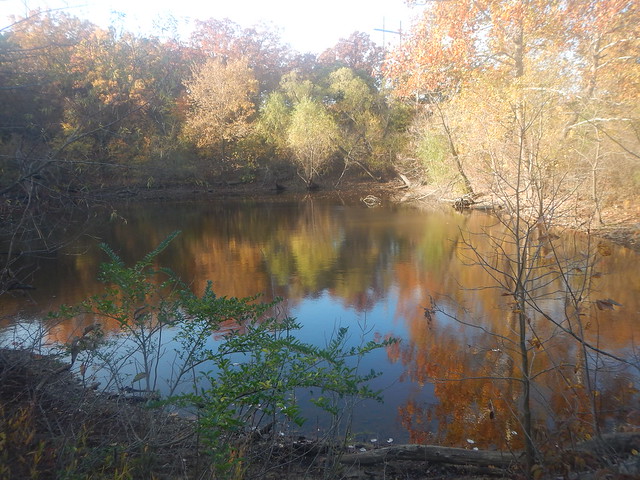 But other than getting passed I ran by myself. I was really enjoying the Fall colors. 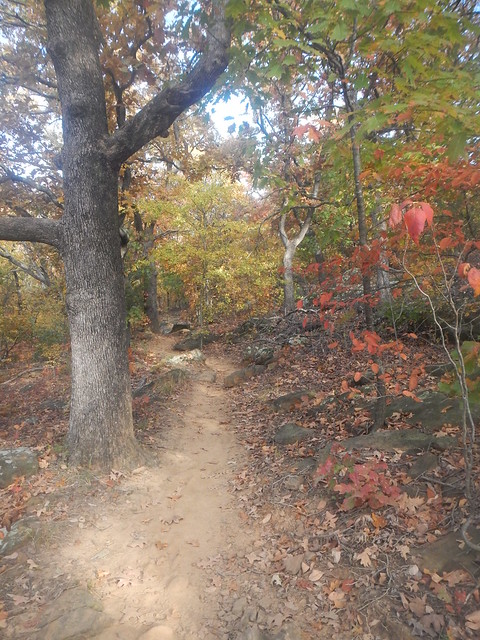 And it was kind of funny. The mountain is not closed during the race and all the trails are open and so there lots of other people out and about. I ran into my old boss and his wife. We stopped and chatted for a while. And then he said, “We are not slowing you down are we?” Well actually I am pretty slow all by myself and don’t need any help but we parted. I ran into a family who looked pretty tired with some small ones in tow. They asked me if they were headed to the parking lot. I said no they weren’t, they needed to turn around and go the other way. They asked how far, and you should have seen the look on their faces when I told them that it was about a mile and a half. We talked a little bit more as the Dad couldn’t believe that he was going north when he thought he was going south and I thought he was going to plow on ahead going the wrong way.  I think I got him convinced to turn around but they were still standing there when I left. You know how guys are, right? 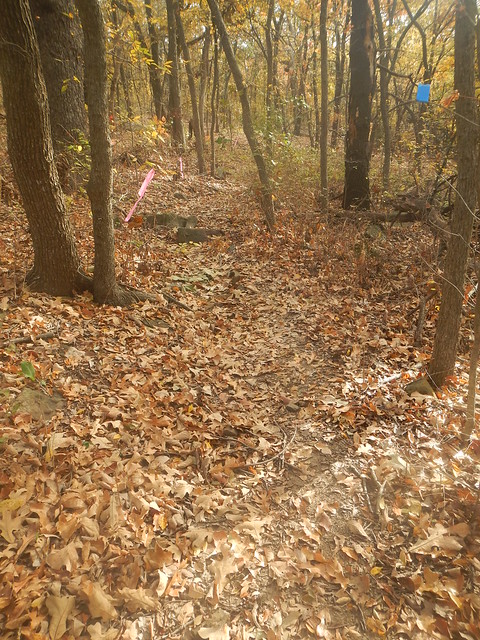 I think that I had been on all the trails the race used before except for this one.You can see the markings  and it is the faintest trail I have ever seen. It was all good. 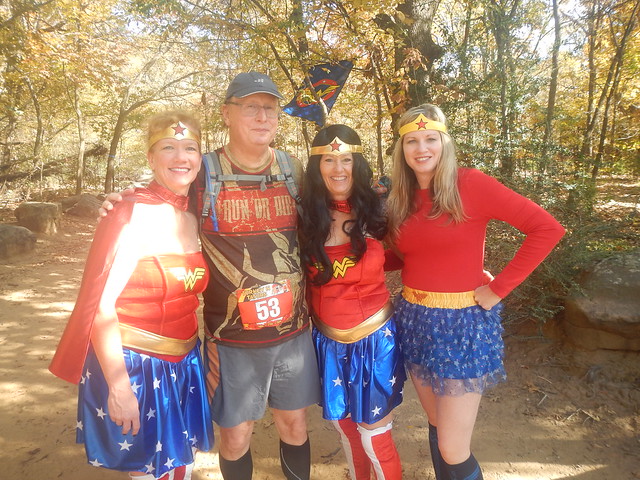 When I got to the lower parking lot I ran into these ladies. The Wonder Women were operating an aid station. They had all sorts of goodies including my new favorites peanut butter and pickel wraps. I ate a bunch of those along with water, gatorade, salted potatoes, a few pickles, pretzels, and fritos and a few cookies. (And you wonder why don’t lose weight with all my running.) They were great hostesses and great sports and a lot of fun. I was at about 10 miles into the run by then and I didn’t take too many other photos.

I left the lower parking lot to get on the Red Trail which goes even lower than the lower trail and then it is uphill quite a ways to the upper parking lot and I walked pretty much the rest of the race.

When I got to the upper parking lot aid station, I lingered while resting and one of the people there said “I feel like I need to do something for you, but I don’t know what.” So I said I was okay and just needed to rest a little bit more. I made sure to hydrate and get some calories in and then I took off, if walking away means taking off. My calves hurt, my feet hurt, and I was tired.  I did perk up and run the last couple hundred yards at the finish. I mean you have to finish strong and make it look like you have been running the whole way. It me about five and half hours or more to finish and I am proud as can be about it.

I am not a big fan of doing races you are not ready for but I think my plan for the 25K worked pretty well. I dreaded  the red trail up to the upper parking lot and it turned out to be worse than I thought it would be but I didn’t stop. I did make baby steps though up the steeper parts.

Here is my relive video of the first 12 miles or so of the run. My gps enabled watch ran out of juice before I finished so the video is incomplete but you can see how intensively the trails were used for the 25K. The 50K was two laps of the 25K. Those guys and gals are my heroes. I couldn’t imagine doing what I did twice.

The run was sponsored by Runners World Tulsa and the Race Directors did a great job. Great well marked course, lots of aid stations, nice t shirt and medal, food, and liquids. Check, check, check, check, and check. But did everybody have fun!! Yes!!

Thanks to Runners World for sponsoring the event, and the co-directors Kathy Hoover and Bryan Drummond, Brian Hoover and Tatur for timing the event, and the army of volunteers who set up the aid stations, cooked the food, and did lots of lugging and packing and for the participants who make it fun. They all got up well before light on a Sunday morning. And a huge thanks for the Wonder Women!!