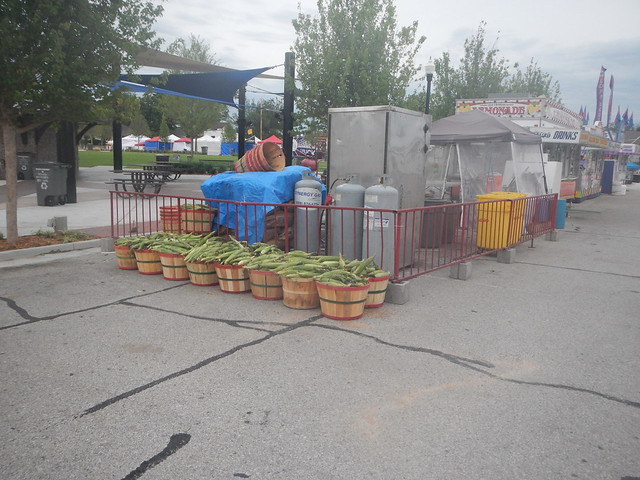 Saturday morning I ventured to the Tulsa suburb of Bixby to run in their “Corn to Run” 5K. 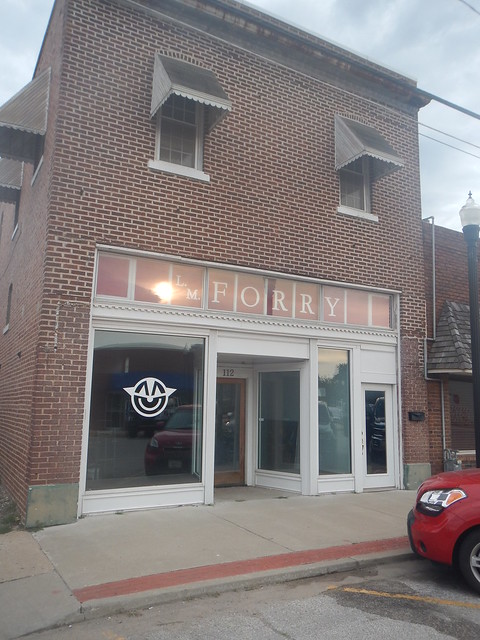 Bixby is home to some of the highest price residential real estate in Oklahoma but it still has a small town feel especially the old downtown area. 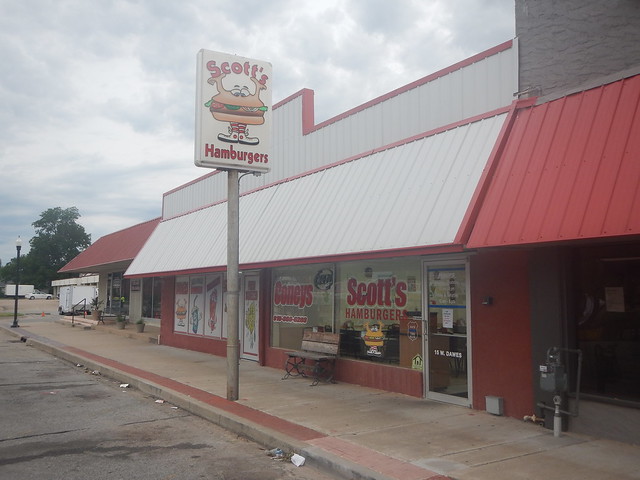 There are still thriving businesses downtown of all kinds. Restaurants, dance studios, and such. 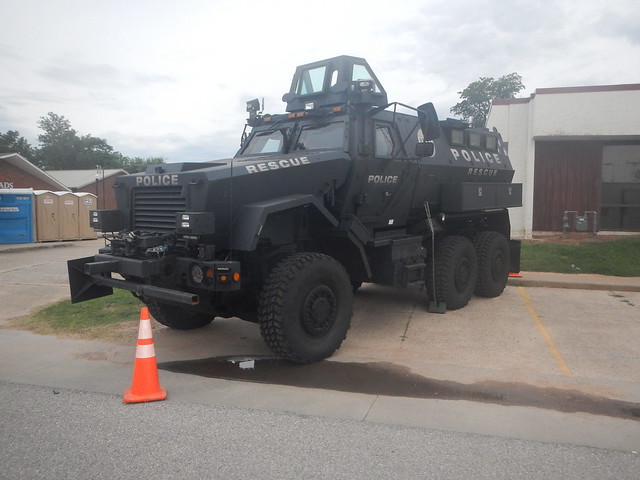 I have no idea why the town thinks they need this thing.

The 5K is part of Bixby’s “Green Corn Festival.” The town is known for its truck farms that produce all sorts of produce including corn. More and more of the farms have sold out to real estate developers and so the acreage devoted to farming continues to decline. 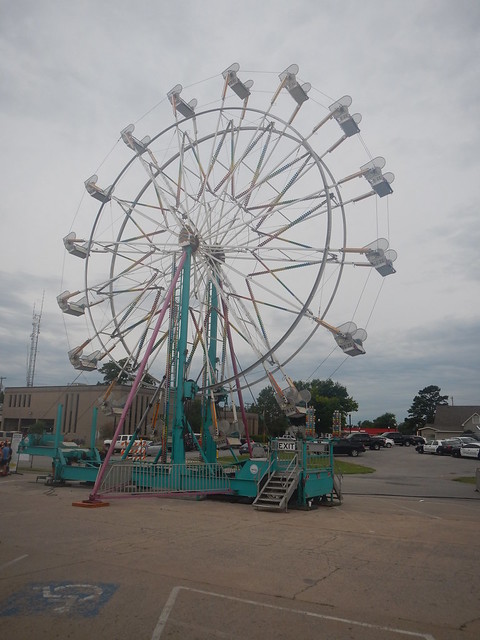 The festival has a carnival with rides, carnival food, and lots of food trucks besides. 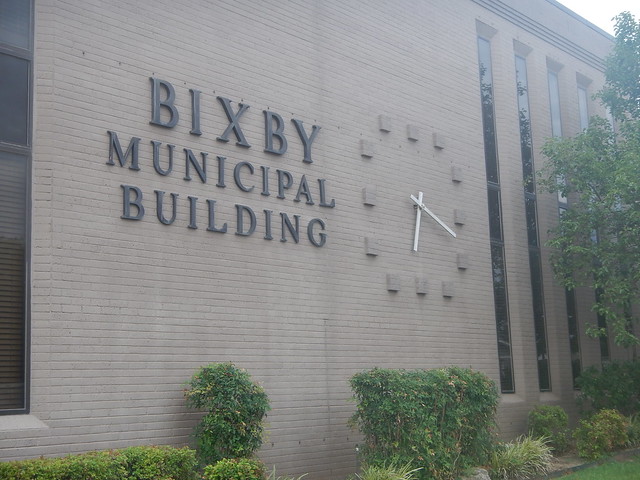 I love this gigantic wall clock on the municipal building 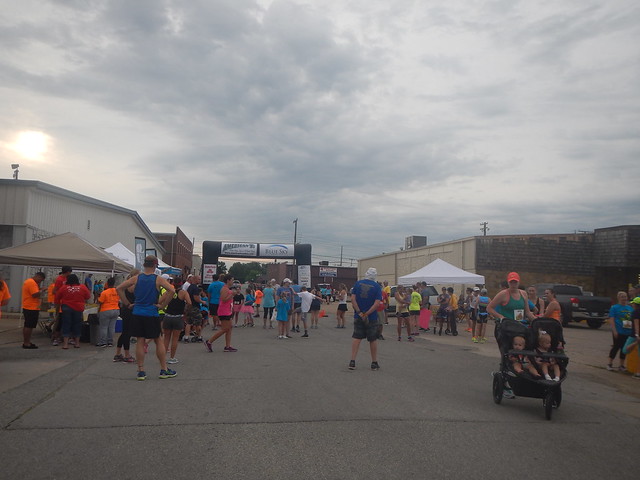 The typical milling about before a race. And then we were off. 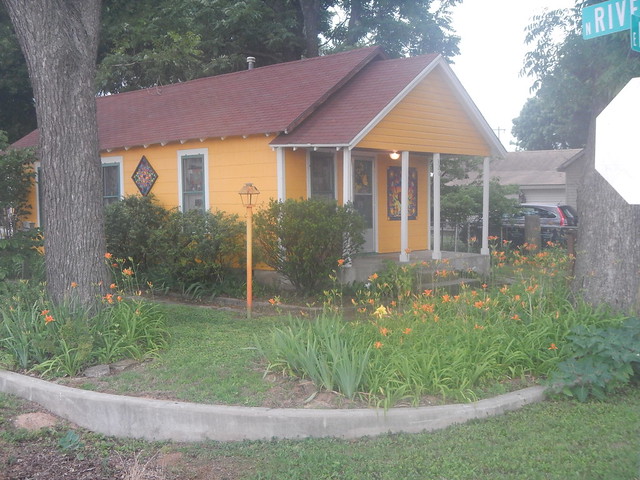 I only stopped to take this one photo. I love this house. We wound around to the east side of town and then down south and then back up. There was not much traffic control, it was not really needed, not many people were out and about and those that were had the good sense and courtesy to not bother the runners. The course was well marked, especially for me since almost all the runners were ahead of me for some reason. 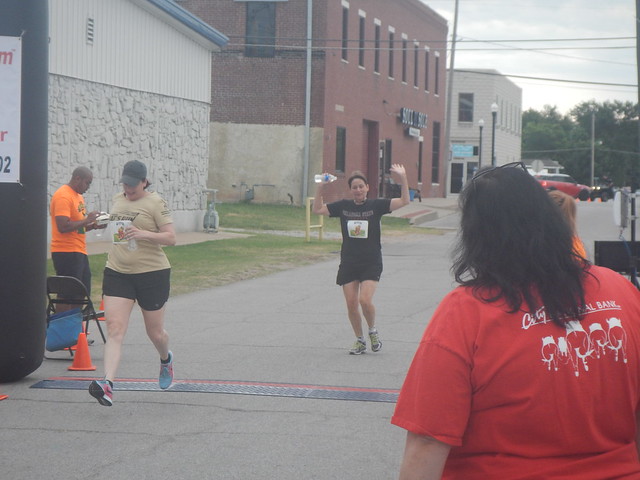 And the finish line!! The guy on the PA made if fun for everybody and held off the awards ceremony until the everybody made it in. 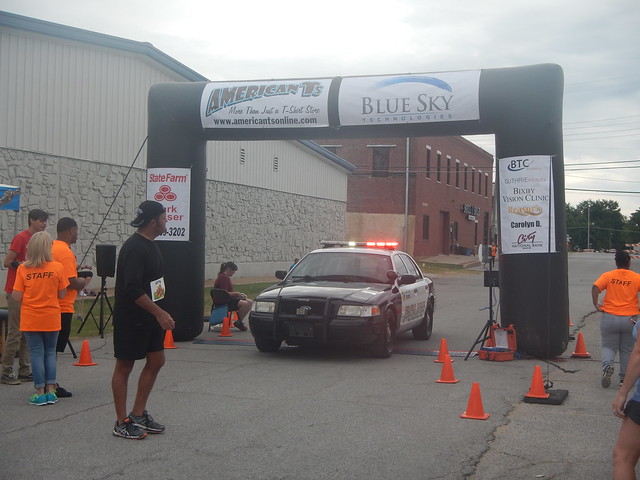 Including the police department, who finished last. 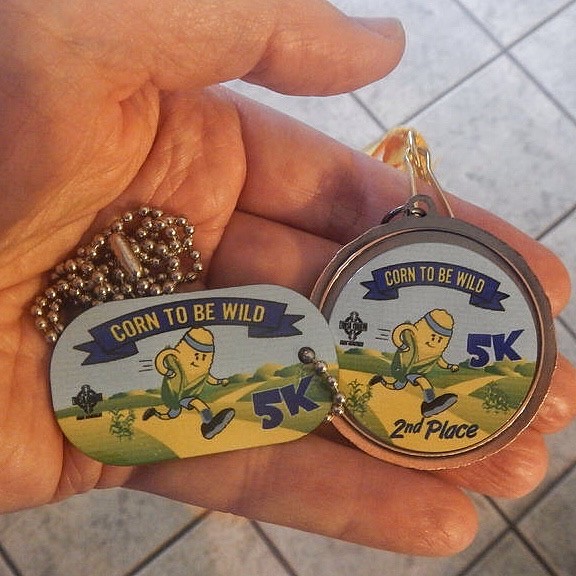 I ended up getting second in the 60 to 70 year old category.  There were three of us in case you were wondering. The little dog tag is something that they gave everybody who finished.

The race was well organized. Lots of helpful volunteers, the water at the end was cold, they had snacks, ample portapotty’s, the course was well marked and free of problems. The race started on time and they started the awards promptly and moved through them quickly. The race director and the people helping him did a great job. This should have been a totally satisfying race but it wasn’t quite for me and I’m going to tell you why.

They only had shirts for people who had registered by June 16. None for anybody else. The only thing said on the registration process was that shirts were not guaranteed for those who registered after that date. Okay fair enough, I should have known, right? Well maybe. I have run in over 150 races since I started running them twenty three years ago. Most of them I enter just a few days before the event and many the morning of the event. This is the first race where I didn’t get a shirt. Sometimes I had to take a different size shirt. Several times the race director had extra shirts made up and I got them a month after the event. Here they made no attempt to do any of that. They should have said “Guaranteed no shirt” after the 16th. Many races have an option for no shirt at a discounted entry. 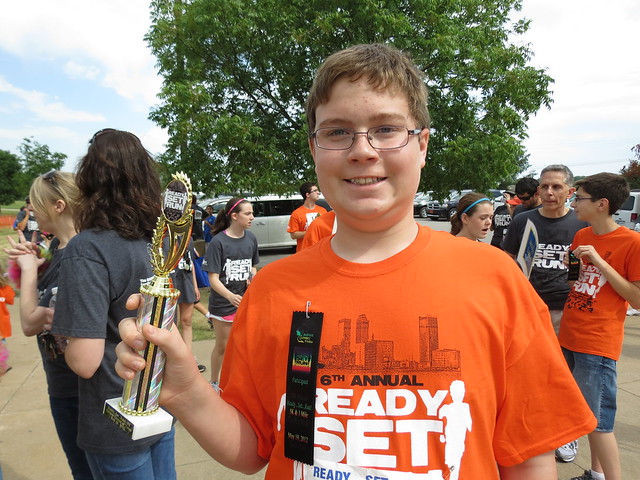 Logan and a run shirt.

I know why they do this and I get it. I have helped with several races and what drives race directors crazy is trying to figure out how many people are going to show up. So if you want to make sure that everybody gets a shirt then you have to kind of guess and hope that you didn’t order too many. The shirts are not free and the value of a shirt an hour after an event is basically zero. 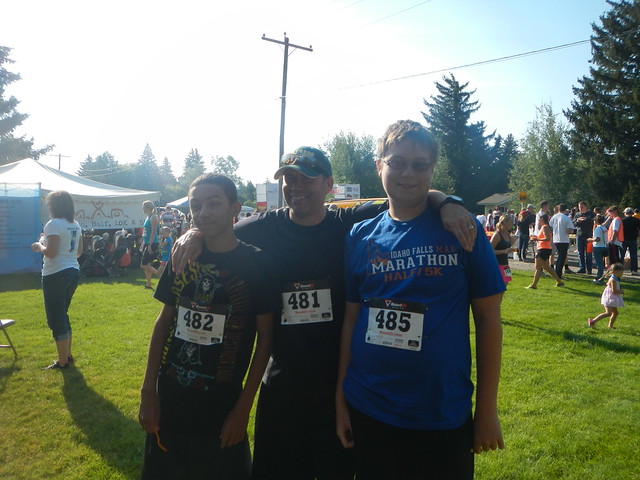 Logan with his cousin Shiloh and Uncle Irvin at a race in Idaho.

These races can bring in a lot of money but they cost a lot of money also. For everything from chip timing, to renting the tents and tables that you need, course security, course certification. The directors have to recruit volunteers to help them out and make sure they know what to do. So I get it, I really do. And so your costs are fixed and then you get guys like me who register at the last minute, full of expectations. 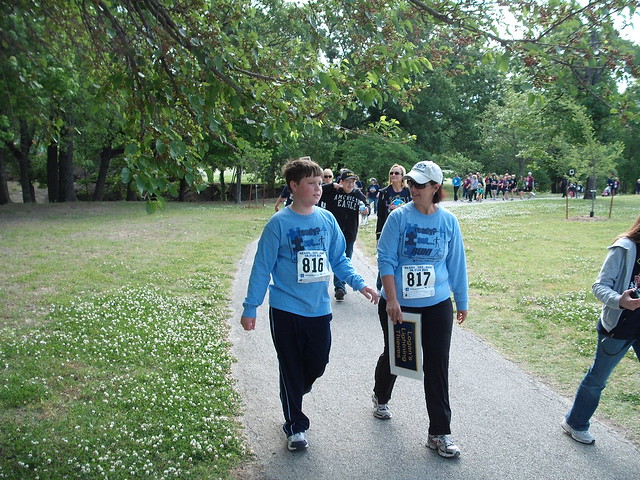 Logan and my wife Heather at an event in Tulsa a few years ago.

And so why do I register so late? Why don’t I get on board and register a week and a half in advance? I’ll tell you why! Life, that is why. Just with what is going on I am not sure that I am going to be able to race until a few days before and I don’t want to spend the $30 and not be able to go. Sorry, but our family schedule is like the fog until something breaks free and it is like, okay, I am going to be able to race so then I hit the interwebs looking for something to go to.  I don’t think that I am that much different than other people. Especially those with a family. 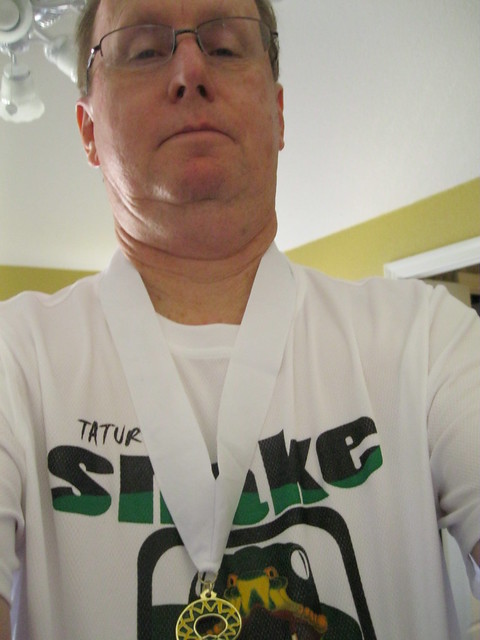 I still have that shirt!

And not only that, I love race shirts. I have a bunch of them and they are one of the reasons I run the races. Many races have a cheaper no shirt option and I have never signed up for that. So, yep it may be childish of me, but there it is. 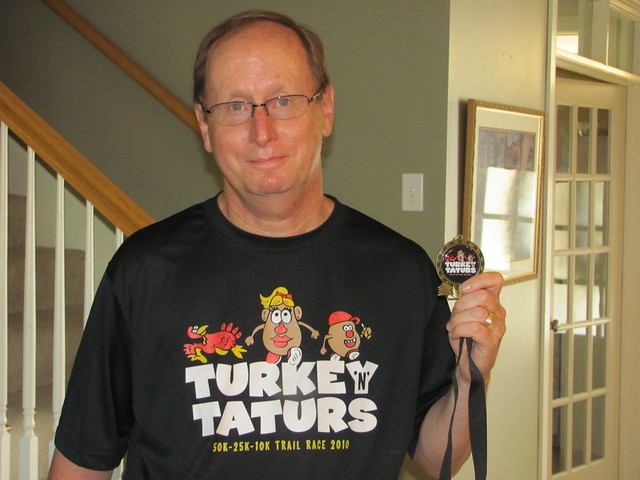 I still have that shirt also!

Why am I make such a big deal about this?

Doing my research I am seeing a many races using the “Shirts Not Guranteed” language for registrations after a certain date. So it is more than just this one race.

And so why should Race Directors listen to me?

Satisfaction is why. If you have ever been in a sales or marketing role you will realize that making the sale is not the end of the process. If your customer is not happy with the deal he struck then you did not make a good deal. You see that in a lot of businesses (successful businesses that is) where the after sale is treated very seriously by the customer. You have to make the customer feel good about what he or she has agreed to do. And I think that translates directly to races. I will tell you that the only way I am going to run the “Corn to Run” event next year is I am guaranteed a shirt.

Ideas on what to do?

What do I think race directors do?

So anyway, I hope I didn’t spoil anybody’s time nor am I denigrating the Race Director or others involved in the well run and fun “Corn to Run 5K.” I am offering my comments and I hope that are seen as constructive. I also recognize that things change and as financial pressures on races continue we may see more changes. I recognize that I may be trying to swim upstream on this issue.