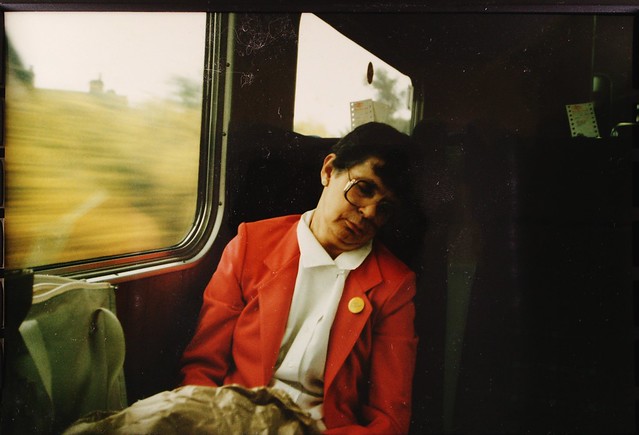 Here is my Mother, taking a nap on bus (or maybe a train, I wasn’t there) speeding through her beloved Ireland way back when. She has been gone a long time and I never stop missing her. 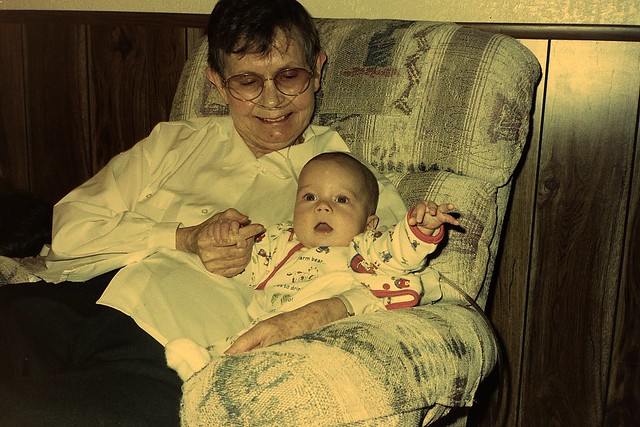 Here she is with her grandson Logan. I think they liked each other. 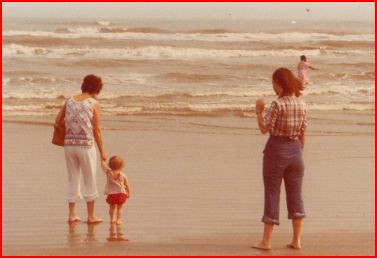 And this is my mother way back in the 70’s on Galveston beach. The woman to the right taking the picture is my sister who has three daughters of her own now (and two grandkids)  including the little cutie holding our Mother’s hand. That little cutie has a brand new baby of her own this year and is celebrating her very first Mother’s Day. 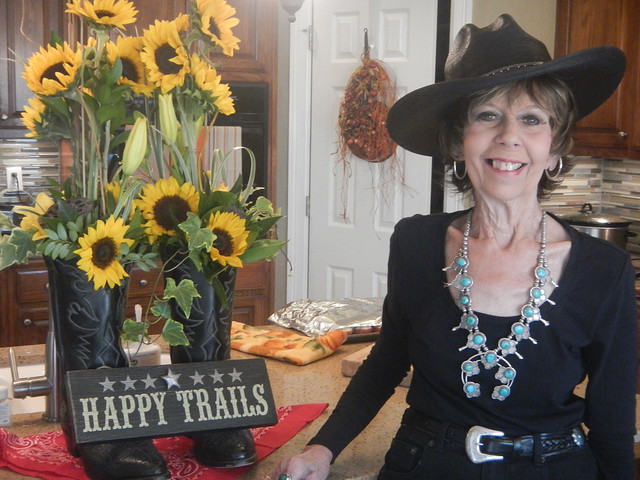 And this is my Mother-in-Law Nana. She is quite a stylish Nana. 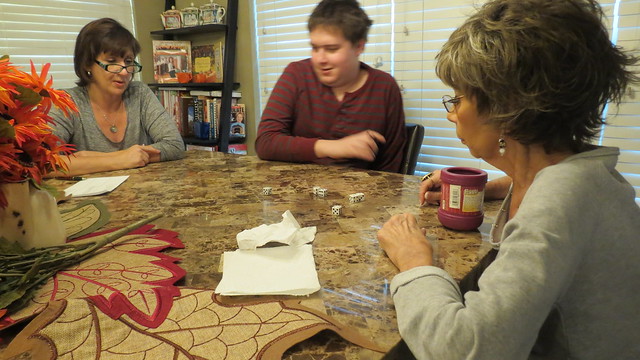 And among her many skills is that she is very competitive at board games. 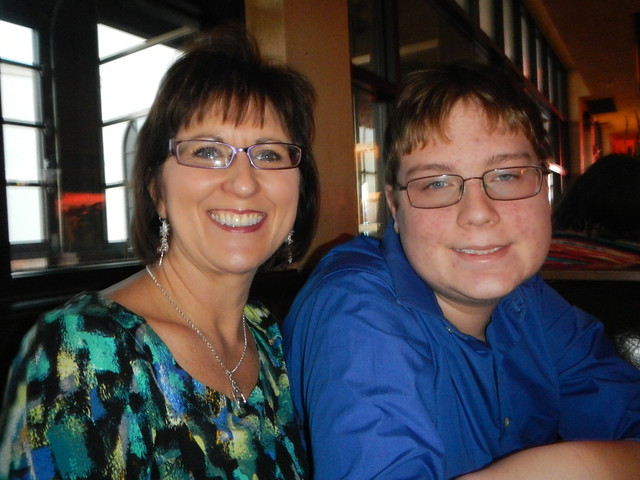 And here is my wife, Heather, mother to our son Logan. Heather is very special to me. I love her very much. She is also full of surprises. For one thing she got certified as a Zumba instructor this year so now she is teaching classes. Once she decides she is going to do something, it gets done. If you want to help fine, if not, get out of the way!

And Happy Mother’s Day to all the Mothers in the world. Where would be without them? 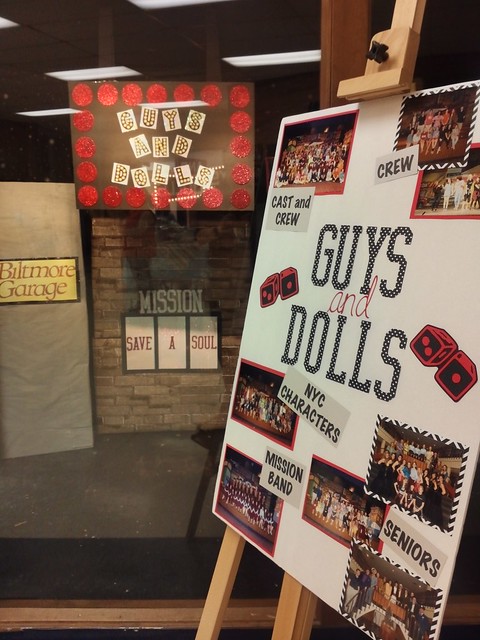 Logan’s school put on a production of Guys and Dolls this past weekend. 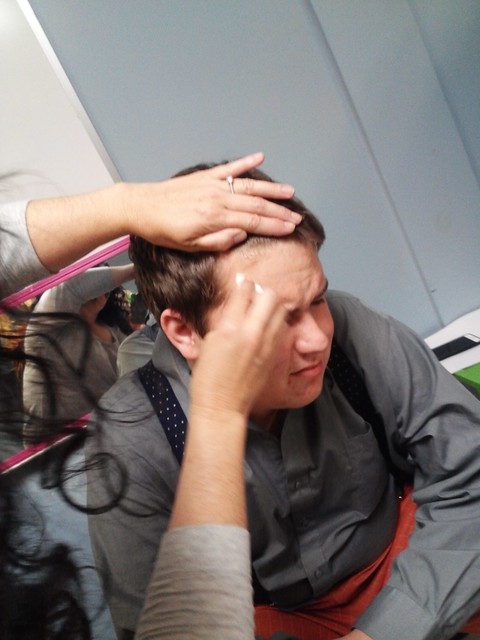 Son Logan had a small part and even the guys with the small part have to get makeup. 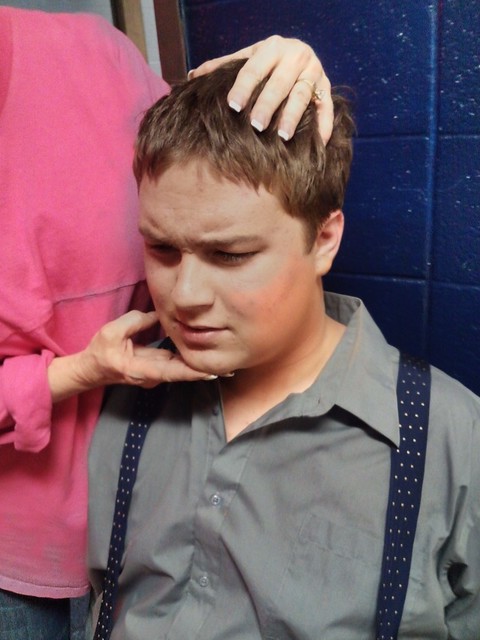 Complete with the head tilted up and down and side to side. No complaining either. Or rather you can go ahead and complain but nobody is listening to you. 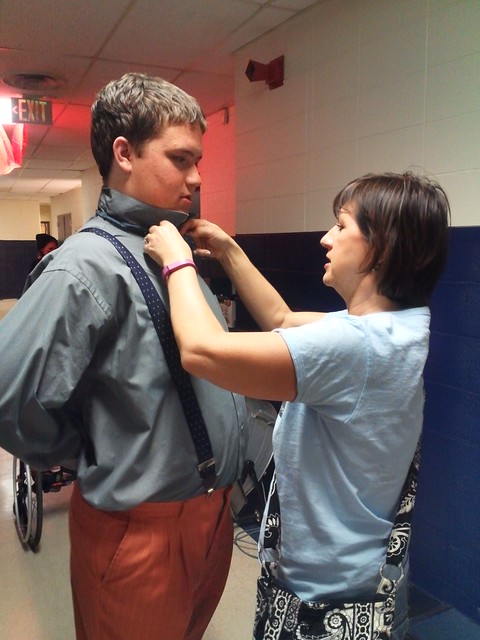 And then Mom ties your tie and makes sure that your shirt is tucked in. 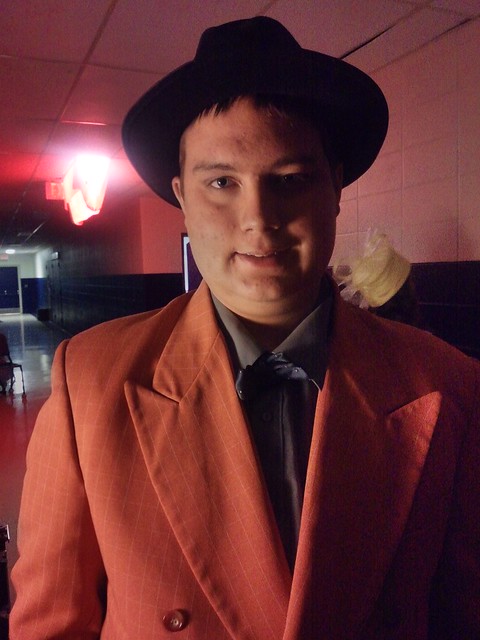 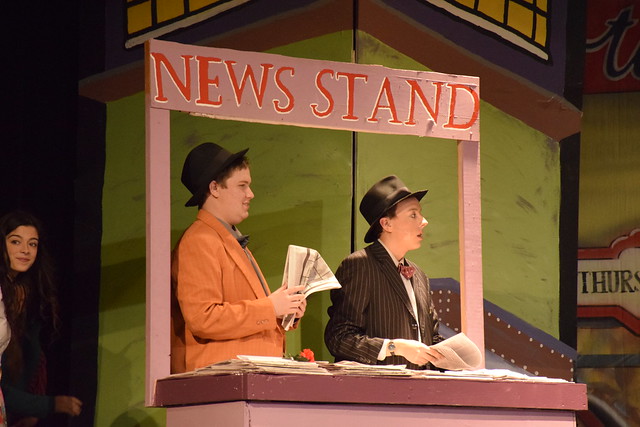 Your time on the stage kid! 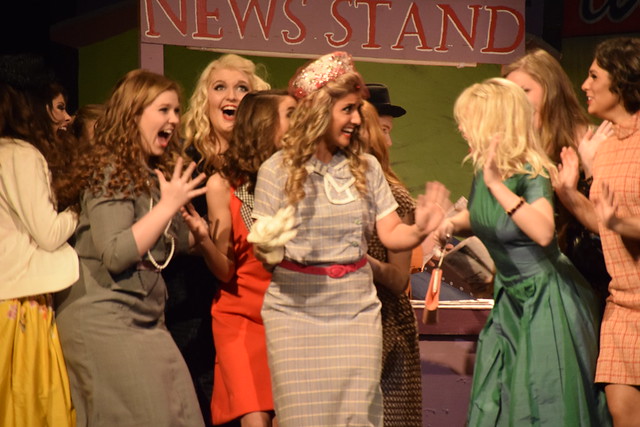 And then the girls in the 1940’s style dresses show up and steal it away from you. That’s life kid. 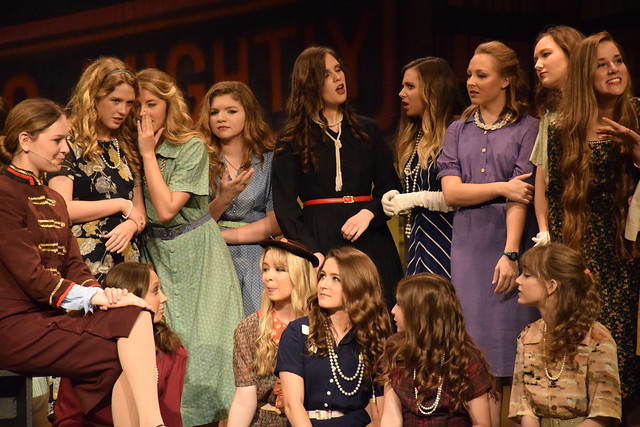 And then we get more girls. 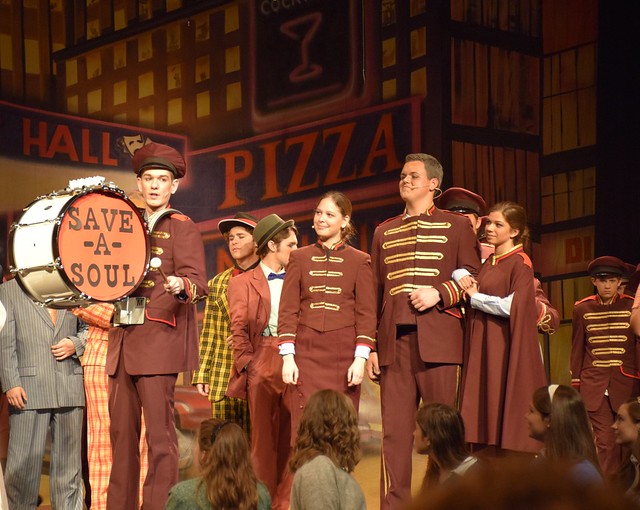 And then we get the Salvation Army. This is a Christian School production after all. 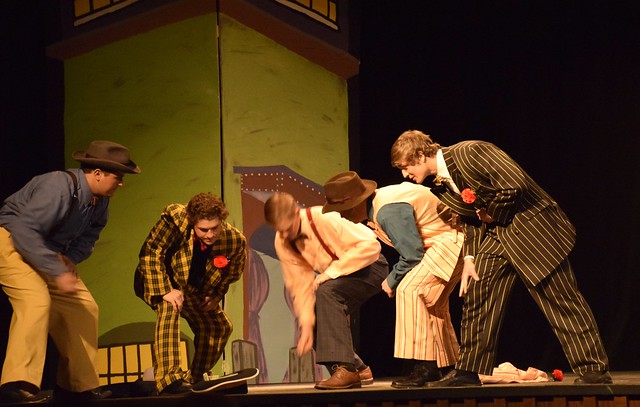 And then the guys come out. You know how guys are, sinning one minute. 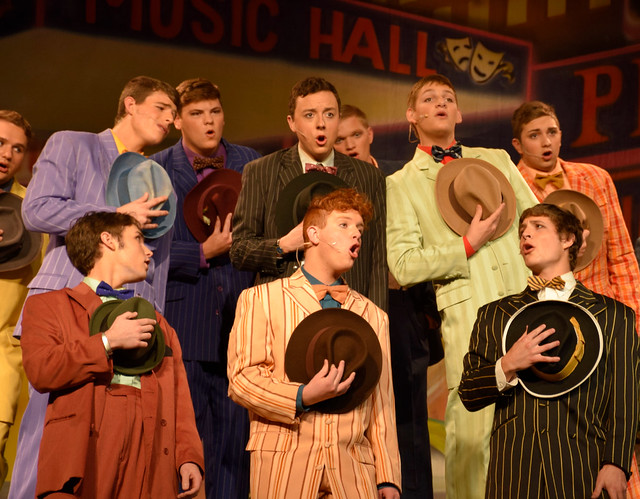 Singing in church the next. 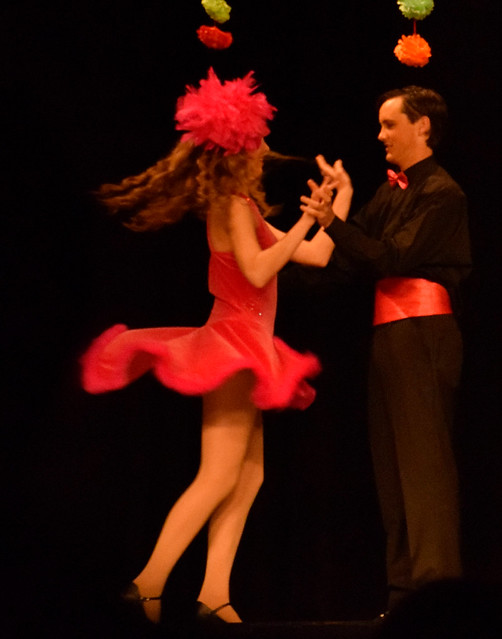 And then we get the dancing girls with the twirly dresses. There was a whole stage of them. Too many heads showed up on the photo so I cropped all but this one girl out. You get the idea. The dresses were sewn by the moms supervised by one who had a mathematical background who figured out a precise pattern for each girl (no I am not kidding.) You can tell she had the right equations.  Pretty amazing the moms in this show. Without them, not much would have happened. 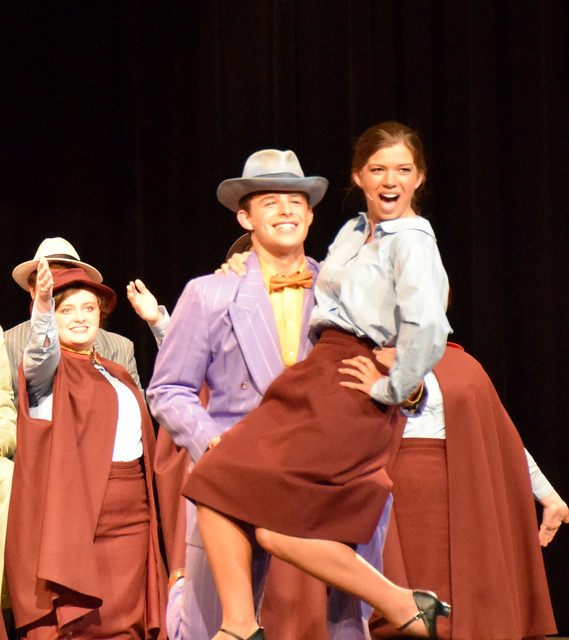 The kids gave it their all. They worked hard for weeks, and so did the moms and the teachers. It was exhausting. 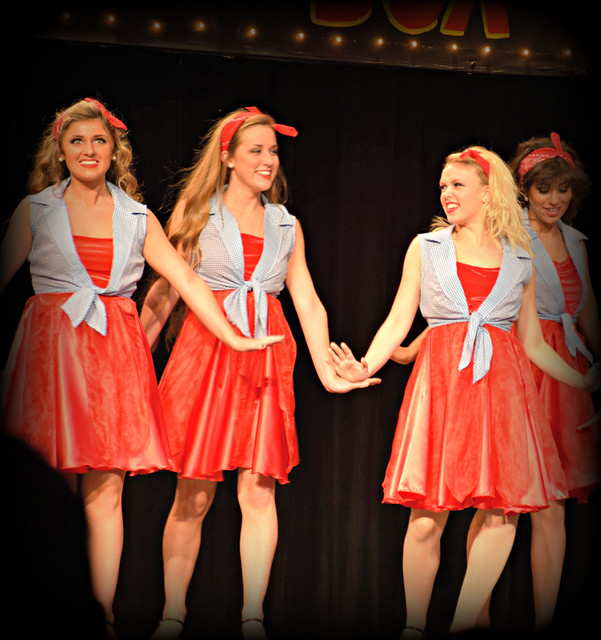 The result was great. 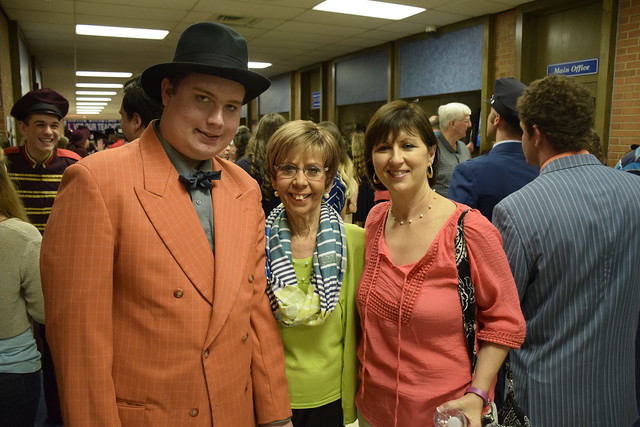 Here is our gentle giant of a sun next to his Nana and Mom. Doesn’t he look great in a double breasted suit? 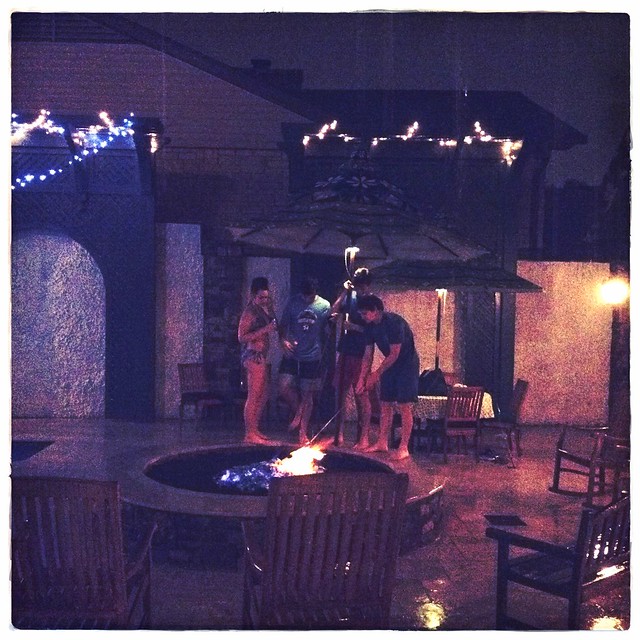 And then on to the afterparty, food, soft drinks, and a swimming pool. Nothing better than that for teenagers. A nice big firepit for making smores and then a big downpour showed up putting a damper on the smores until one of them grabbed a big table umbrella. That’s problem solving I think. What do you think.

They’ll be talking about this production for years.

I don’t get the whole deal with Santa Claus, do you? I mean the little fat dude and his elves somehow to arrange to deliver all sorts of goods from all sorts of places to kids all over the world in just a matter of hours. He is almost as good as Amazon Prime. My question is why can’t he assemble the stuff he delivers? I mean finish the job. I can tell you with Logan over the years I have spent hours putting together bicycles and action figure sets and scouring the internet looking for tips. Cmon Santa, throw us a bone why don’t you? 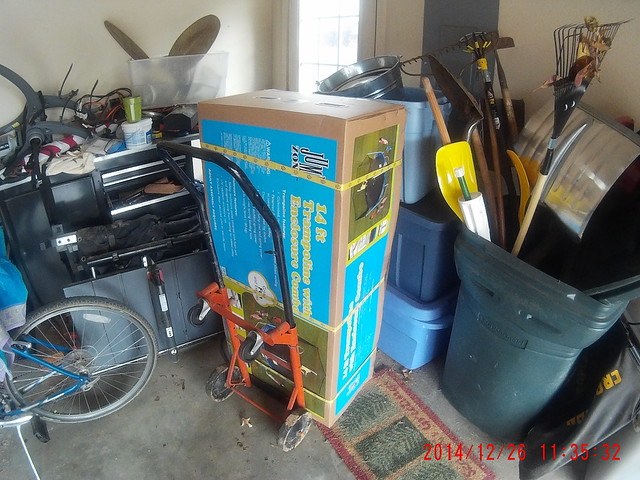 Santa got Logan a new trampoline this year. It is his third. He loves his trampolines and just wears them out. So Santa keeps bringing him new ones. Well Santa just delivered this big ass heavy box  that has been in our garage for a few days. And that’s the end of his responsibility. It is up to me to get the thing moved out back and assembled. 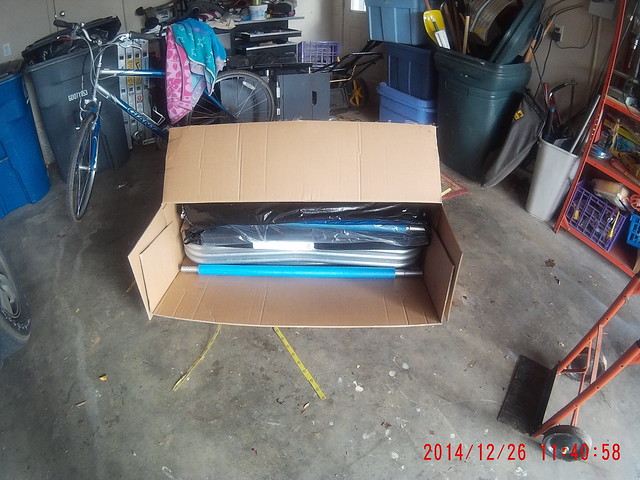 Sorry about my messy garage. Santa doesn’t clean and organize garages either.

Yeah, well I’m an older Dad and we older Dad’s don’t struggle with the box moving it out back. We take the stuff out of the box and move it out back in several trips. That’s not as manly as taking the whole box back but sure is a lot easier. 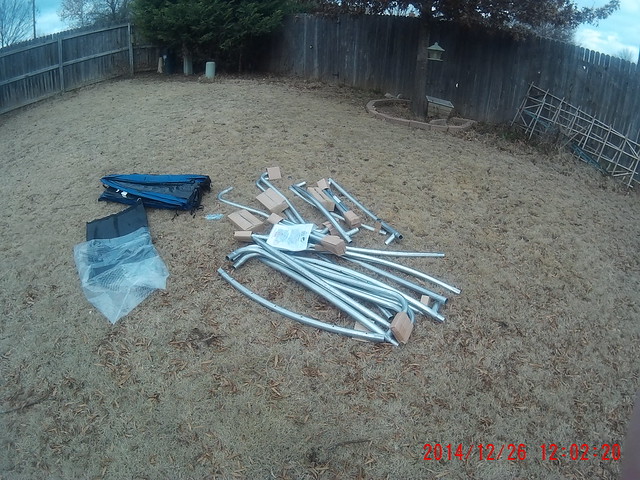 Nice thing about winter is that grass turns brown and doesn’t grow.

So there it is. Now if Santa was magical, couldn’t he just give me a shazzam to make it all pop together? 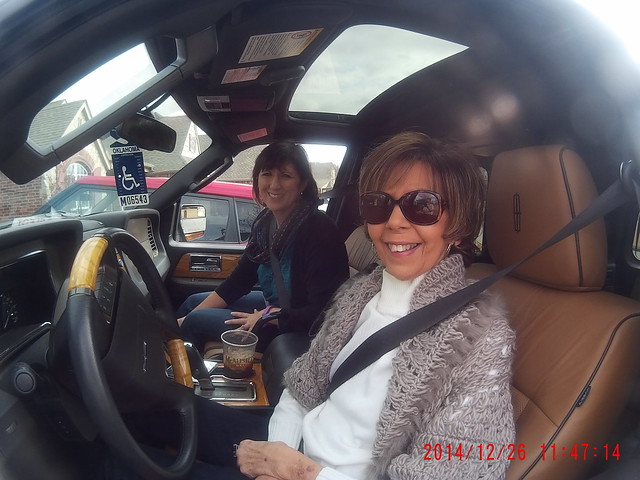 The camera has a 170 degree view which gives everything a fisheye effect which works for this kind of shot.

Hey, I got something better than a shazzam, I got Heather back from a shopping trip with Nana. (In case you are wondering Nana financed the trampoline.) Heather immediately regretted not shopping longer as I recruited her into finishing the task.

So with Heather, you just get right to work. No stopping to take pics or anything like that. She is a mom you know. Mom’s don’t put up with Dad’s foolishness too much. Anyway I used my new SJ4000 camera to video Logan and his friend Q jumping and then I handed the camera to Logan to get a view of what the world looks like while you are jumping on the trampoline. It records in HD mode which for nice pics but it takes forever to load them. Sorry about all the fingers and thumbs. I’m still learning.

So, what do you think? Should Santa assemble as well as deliver?