In pursuit of my geocaching hobby I paid a visit to the Prayer Tower at Tulsa’s Oral Roberts University. The tower is right in the middle of the campus and it is designed to be a three dimensional cross. It certainly is striking with a flame out the top and a bunch of bronzed glass covering it.

It is now back open to the public from 12PM to 4 PM Monday through Saturday. There is no charge. So I showed up and showed my ID and up the elevator I went to the observation deck.

They have several stations with quotes by Reverend Roberts around the deck. They also have a couple private prayer rooms and a larger room for groups. It was all tastefully done, quiet, and reverential. The quotes were all very commonsensical. Anyway I had to find another one of Robert’s quotes in order to complete a virtual cache, my 2000th.

The grounds immediately surrounding the tower have several sculptures, a topiary garden, and other things to look at. It has been years since I have been on the campus. Since the university has straightened out their governance to enhance credibility and accountability they appear to be thriving. The grounds are now well taken care of, the buildings have been revamped and updated and they are on another building campaign. It’s nice to see such an important part of Tulsa community on the upswing.

Meanwhile, in downtown Tulsa the world’s largest “Augmented Reality” mural was activated. Above is what the mural looks like without augmentation. It is really a nice mural and beats the big wall of beige they had.

To activate the installation you have to elbow your way to a spot and point your phone camera to the QR code above and then you wait, and then wait some more, and respond to some strange buttons that show up on your camera then the surrounds become alive. The murals become animated and butterflies and birds fly about. And it is in all directions not just at the murals. You see stuff to the sides, straight up in the air, down toward your feet. I’ve never been on LSD but it is quite a trip.

You can record a little bit of it but it won’t save on your phone. I was able to post 10 seconds on instagram but that’s it. I anticipated such a thing so I took along a point and shoot to a video of my phone screeen but there was too much reflections. If you are instagram check out my feed yogiab to look at it. It’s pretty amazing. The installation is called The Majestic. Hit the link to check out more of it. Here is an article from the Tulsa World discussing the project.

I am linking with Skywatch Friday. Come join me and bunch of other skywatching photobloggers. 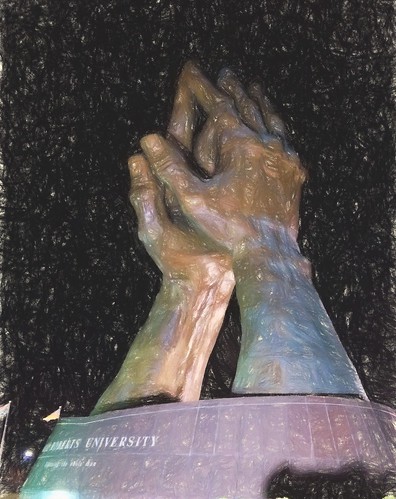 This is a pic of Tulsa’s iconic Healing Hands sculpture at Oral Roberts University. I took some night photographs with my cell phone and then used Topaz Impressions’ Colored Pencil filter to give them a little color.