Monday morning, I drove 43 miles south of Tulsa to the little burg of Okmulgee, Oklahoma in order to pursue my geocaching hobby. First up on the list is an Adventure Lab geocache at Oklahoma State University Institute of Technology. Adventure Lab caches don’t involve finding a physical object, instead you have to navigate to various places and then answer questions about what you find. You use an app on your phone to navigate and it has technology that makes sure you are physically there where you say you are. It discourages “armchair geocachers.”

So it had me go all over the campus finding information. I learned that the campus started out as an Army Hospital during World War II and then later a hospital for German POWs. After the war the USA sold the campus to what is now Oklahoma State University for a dollar.

It is an applied technology school. You don’t go here to think the big thoughts. You go here to learn nursing, engine repair, cooking and a bunch of other fields. It has a 100% placement rate for their graduates.

This is a solar pond that helps reduce the campus heating and cooling costs. The water is circulated through a heat pump is how it works.

This is OSU’s mascot, Pistol Pete. He’s based on a real person, Frank Eaton. At eight years old, he witnessed his father’s murder by six vigilantes. Young Frank practiced shooting until he was fifteen years old and then spent the next six years hunting down and killing his father’s murderers. He later served as a US Marshall for Oklahoma under the Hanging Judge, Isaac Parker. He became the mascot for OSU after he died in 1958. You can’t make this stuff up!! I love stories like this.

Nothing to do with the cache but this is the Natural Gas Compression Technology building. I spent about 40 years messing with natural gas compressors in various capacities. Compressors are what is used to move the natural gas all the way from the wellhead to industrial and home use. It is hard to get into this program. For years all of the graduates have had jobs before they graduate.

And then shifting gears to downtown Okmulgee. It was an oilfield boom town way back when and then went into a long slow decline as the production in the area waned. There is a new spirit in town. People are moving in buying and renovating the many beautiful old buildings that were decaying. They are also commissioning murals such as the one above by famed Native American Muralist, Yatika Starr Fields. The mural above may be the most beautiful mural I have ever seen, (and I have seen a lot of them.)

Even OSU Tech got in on the action converting the above building to an off campus dorm.

So with this cache I went to a lot different murals. It was fun.

With a Where I Go geocache, you eventually have to find a physical object and I did. I don’t want to spoil it for anybody but it is a nanocache which makes it tiny. Lots smaller than the tip of my pinkie fingers.

Anyway, a good morning. It took me a little more than an hour to log both caches and then headed home.

To find out more about Geocaching 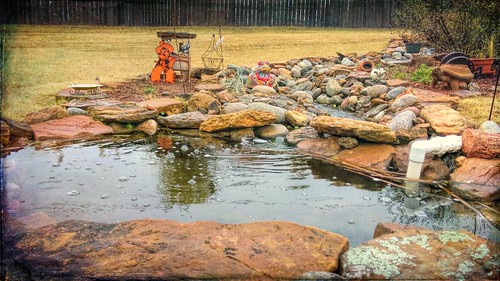 Pistol Pete is the mascot for the Oklahoma State University Cowboys and he is all orange, over the top orange as are his supporters. My wife’s cousin and his wife in Clinton, Oklahoma have Pistol Pete as part of their garden water feature.

This weekend OSU and their the University of Oklahoma (“OU”) play and it is kind of hard to stay neutral if you live in Oklahoma. Even people who didn’t go to either school have strong feelings about the issue. I keep my opinions to myself.

I’m linking with Orange You Glad it is Friday