You know how Harry Potter has a messenger owl? You thought that was make believe? Shows what you know. I have a Messenger Mutt. Messenger Mutts are for people like me who are too cheap to buy an owl. My Messenger Mutt was given to us. Her name is Abby. Isn’t she a cutie? She is not as cool as an owl and she barks a lot but like I say I got her cheap. 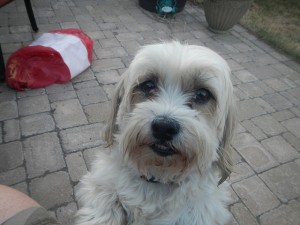 Well the Messenger Mutt had news for me, bad news, about a combination Geocache and Letterbox that son and I have on Turkey Mountain here in Tulsa. A cache called “Boys Night Out – Firefly Swamp.” This is a geocache that has been on Turkey Mountain since Logan and I put it there in 2007. Apparently somebody took the cache container and left the cache contents in the hiding place. This is very strange since usually thieves (aka “Muggles”) take the whole thing. Well dang it I said to myself, “Why would somebody do something like that.” I had a few other choice thoughts but some of my readers are on the genteel side and might take offense at my choice of words. So i told the Messenger Mutt to disable the cache and I’d fix it. 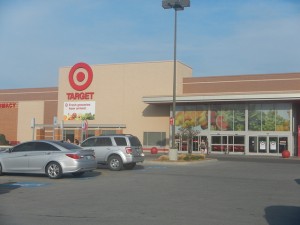 So Wednesday night after work I headed out to Turkey Mountain to replace the cache. First I went to Target to get a new container. Turkey Mountain is an urban wilderness and part of that is that there is a Target handy. The only thing handier than Target for geocachers is Walmart. Neither one of them is a discount store though. They sell cheap stuff cheap. Why is that a discount store? Hey just saying. 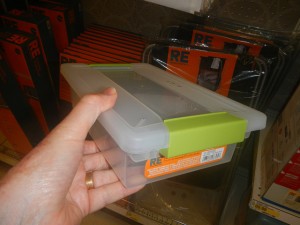 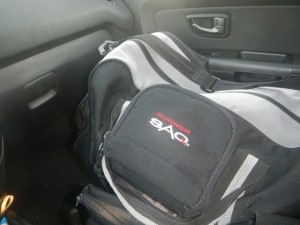 So, I paid for my new cache container and headed out to Turkey Mountain. I changed into my running duds in the parking lot. Nuff said about that. 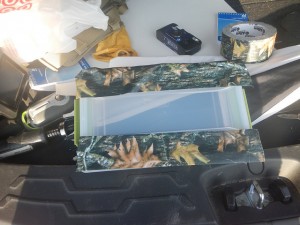 And then opened up the back hatch and built me a cache. Everybody has camo duct tape in their car for building geocache containers right? 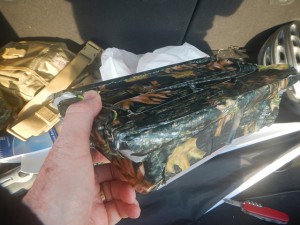 The finished product. I’m thinking of getting into fine handcrafted Amish furniture. Whaddya think? You want to buy a sideboard from me? You see my Swiss Army Knife, no geocacher is ever without one. See the corkscrew? No Gas Supply person with a gas company is ever out one of those either. But that is another story. 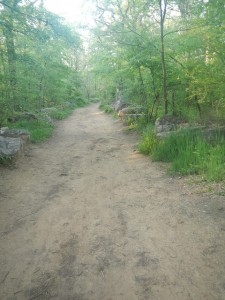 So with my running duds on and a geocache container tucked under my arm like a true trail runner nerd  down the Yellow Trail I went. 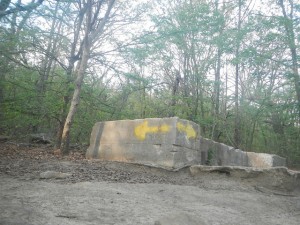 Remember, if you get lost just go the direction that the yellow arrow points. 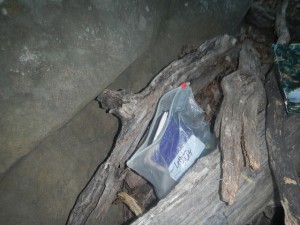 To ground zero, the cache site. Sure enough the ammo box is gone and all the contents are in a plastic bag. 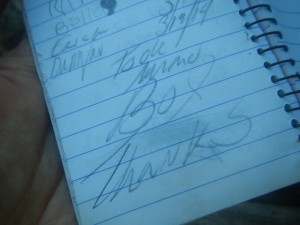 And looking at the log book the turkey who took it was nice enough to write a note. Thanks yourself dude or dudette. Don’t let the screen door hit ya where good Lord split ya is my response. It is kind of hard for me to get mad at this. And they did leave the contents undisturbed which is important for the letterboxers among us. 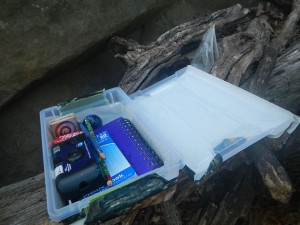 So I packed up everything nice and tidy. Everything that I couldn’t fit in the new box or was just miscellaneous trash I put in the plastic bag and hid it underneath the cache so I could pick it up later and dispose on my way out. People put weird stuff in caches. One guy put a used brillo pad in a cache I owned in town. When I asked how stupid that was he took offense. He said he thought it would be funny. 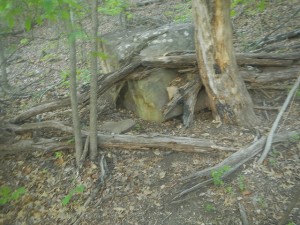 Still a nice hide, so off I went on the rest of my run. 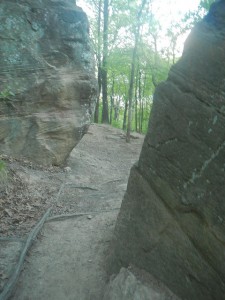 Along the rocks and through the rocks. 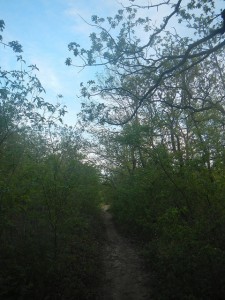 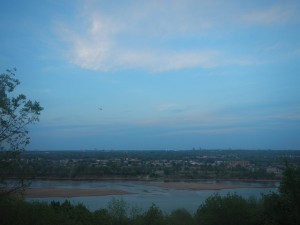 Underneath the beautiful Oklahoma Sky. I looped back to the cache and picked up the trash I stowed their earlier and headed back to the parking lot.

I hope that it lasts another seven years.