One of my favorite bloggers Jen of “Are You There God, It’s Me Generation X” had a post the other day about our disappearing record stores. It made me all nostalgic about record stores and record albums and such as that and mourning the loss of record stores and the role music plays in our life. It seems like most music these days is listened on to on Ipod’s and not really shared. Everybody is doing there own thing.

SuperPizzaBoy had occasion to visit the Tulsa History Museum the other day and, guess what, they had a working juke box that one could play for free. 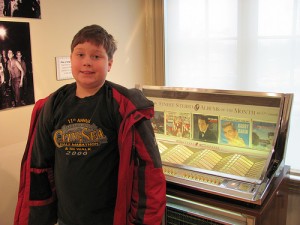 So SPB picked a song and then hit the letter and the number to play. The machine gave a good solid “KATHUNK!” with each press and we heard Frank Sinatra’s “My Way.” Of course SPB being himself picked the next song by playing hitting two buttons at random and so we got the Partridge Family or somethin.

When I was the age SPB is now we lived in Price, Utah. We had a favorite Mexican food restaurant in the nearby coal mining town of Helper. We used to go to the restaurant on a Friday or Saturday night and there was a always a war going on. They had a juke box and some of the local teenagers would put their quarters in to play what my Mother called “Wild hippie music.” The older’s would complain and the waitresses, who were older, would turn the volume down by some knob on the back of the machine muttering “I don’t know why them kids play there music so loud.” As soon as they went to the back, the kids would jack the volume back up. And on it would go.

Maybe that’s where I developed my love for chaos and conflict? Anyway, I thought it was great.

Anybody else out there miss juke boxes?