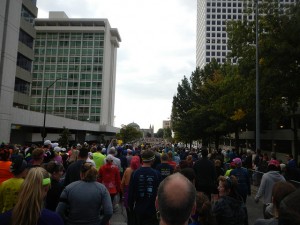 (The race started several minutes ago and I’m still walking up to the start line. The leaders are over a quarter mile down the road)

Saturday I ran the Tulsa Run 15K. It was my 20th consecutive Tulsa Run. This race was the first race I ever ran way back when and I love it. I have had to make mad dashes from the race to home to shower and catch planes a couple of times. I’ll run it for as long as I can. 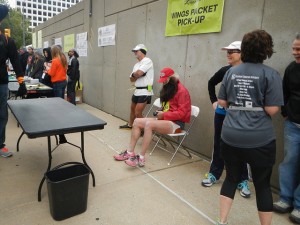 It is like a my meditiation. I run it, no headphones, just the clippity clop of my fellow runner’s feet, the music from the various bands. The generally cool breezy weather. I don’t know. I run it and seems like 5 minutes later, its done. 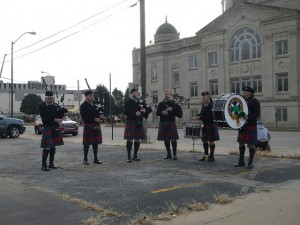 (There are always lots of bands and musical groups on the route. Used to be there were middle and high school cheerleaders.)

I’ve never been very fast, and I’ve gotten slower as I’ve gotten older and fatter. I used to have time goals and all that. Now I just want to run it. I stop and take pictures. 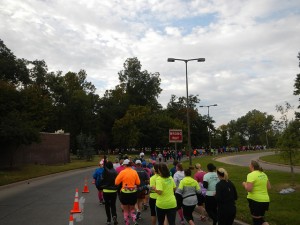 There were about 4400 runners in the race and it is amazing to me how fast they separate from each other. I always start at the very back. This year it took me about five minutes to get to the start line after the gun went off. 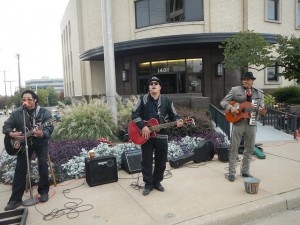 I had been battling a sinus infection all week and considered not running. But I felt better Saturday. 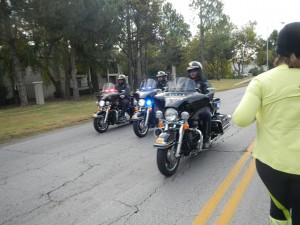 (Do motorcycle policemen ever smile?)

It is a down and back route which some people consider boring. Maybe so, but it gives one the opportunity to check out the leaders and friends in the race. The leaders are amazingly fast. 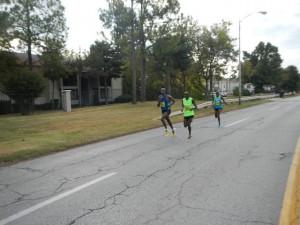 When I first starte running the race I knew all sorts of people who also run the race. Over the years though almost all my friends and acquaintances quit running for one reason or another. 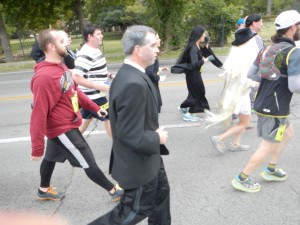 (The Addams Family, and part of my thumb.)

I don’t know how long I’ll be running it. I figure when I can’t I’ll show up and cheer the folks on. Maybe hold up a sign or ring some cowbells. 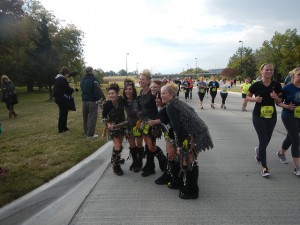 Hmm, how do you like the Cave Girls? Let me see, there is Wilma Flintstone and there is Betty Rubble, I don’t know who the others are. Do you? 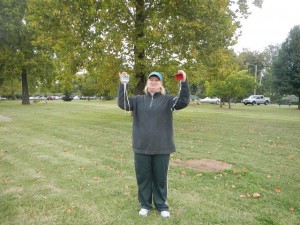 (Fellow geocacher Ann, aka “ExtremeMom” ringing the cowbells. If you are finding geocaches on the Riverparks chances are they are hers.)

Anyway, it seems before it even started it was over. I ran out of gas at 8K and started running three streetlights and walking one. I did that all the way except when I came within sight of the finish line. You always have to look good at the end right? 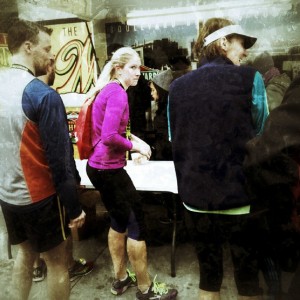 I lined up at the beer truck, grabbed my two, drank’em and went home. 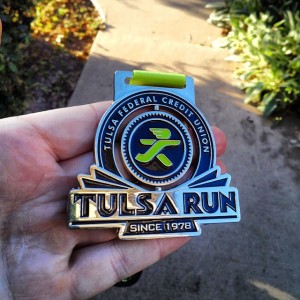 Do you have something you like to do year after year?