I’ve been off the air lately. A few nights ago our internet crashed. I am not sure what caused it but it may be the Obamacare website thrashing around in its death throes did our access in. Stuff like this never happened with Bush is what I say. Of course most Republicans these days don’t even know who Bush is. They seem to think that we didn’t really have a President in the eight years before Obama. And you know they may be right! But I’m digressing The point is that I lost my internet but that’s okay cuz I was out gathering material. 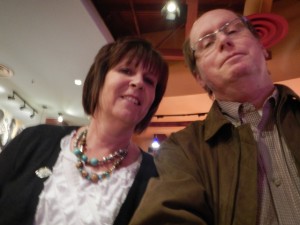 My sister and her youngest daughter came to town for a horse show. (A little bit about that later.) We got to visit a little bit. It would have been rude to be writing a post during a visit don’t you think? For those of you who don’t think that I ever smile, this picture is proof that I do! Sister Ellen is also a fellow blogger. Go check out at News From The “Pole” Yard. 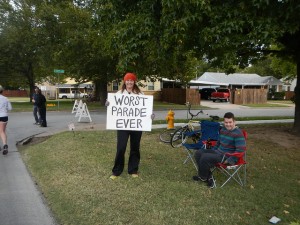 On Saturday I ran the Tulsa Run 15K. It kind of hurt. I had a sinus infection going on and had missed three days of work. Of course my boss is a runner also and asked me Saturday morning, “Oh, so you feel okay to run, huh?” To make matters worse I came in ahead of him, and his wife. Oh well, all in good fun is what I say. I’ll have more about the race in a later post. 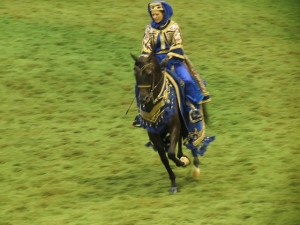 Ellen and Jillian are both really involved with 4H and horses and horse judging. They were in town for the U.S. National Arabian and Half-Arabian Championship Horse Show. On Saturday night we met them at the show.  I had never been to such a thing and it was just amazing. I have not seen anything like this horse show ever, not on television or anywhere. Those Arabian Horses are very spirited, high strung and beautiful and the owners, breeders, and fans are passionate about the breed. I’ll also be posting more about this later. The National Championship is coming back to Tulsa each year for the next five years. I’ll be there!! Getting high on that green sawdust. 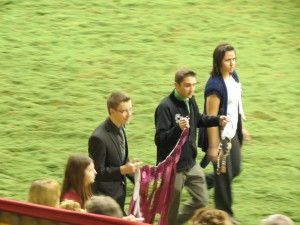 Jillian (at the far right) was the coach of a high school 4H horse judging team from Colorado. Jillian competed extensively in high school and then later at Colorado State University before she graduated. She stays active in the sport. She took vacation from her job to come down with the kids and help them compete. 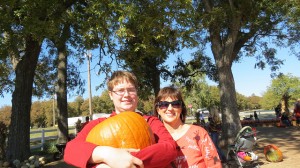 And then of course we went to the Pumpkin Patch. Gotta have pumpkins this time of year. Of course, Logan can carry the pumpkins now. We started bringing him out here when he was about the size of the one he is holding.

So, anyway, that’s my whirlwind post. I’ve missed everybody! But it was a nice break also. We had a lot going on.