Another Sunday, another edition of what is becoming one of my favorite memes “Scavenger Hunt Sunday.”

So lets get going for my finds for this week.

We are members of Tulsa’s Philbrook Museum. I have been there lots of times and every time I go I see something new. There is lots of water features in the gardens of the museum including fountains. I became interested in the splashing drops of one of the fountains the last time I was there. There is something about water that soothes the soul.

I also paid some attention to this Terra Cotta angel. It is Italian and is almost 500 years old. It is not known where it was originally installed but it is believed that that it and its twin flanked an altar at a church. 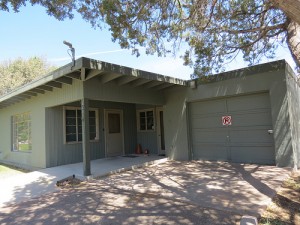 Back in April I joined my brother, sister, and father in Payson, Arizona where we used to live back in the late 50’s and early 60’s. We lived in this house. It was owned by the US Forest Service and was an exact twin of the house we lived in previously in Coyote, New Mexico. It was a shock to see it still standing and still in use, but as an office not a house. 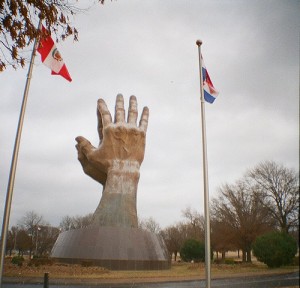 Hey we live in Tulsa, the Praying Hands have the most famous fingers in town. I like this shot because it looks like the hand is pressing its fingers against a mirror. 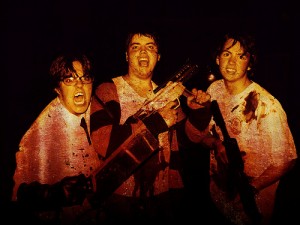 The Hay Ride is what I picked from the Bucket List. These guys are seniors last year at our son’s high school. At the school’s hay ride last year these guys and some compadres staged an attack on the hay ride that led to many screams and much hilarity. They were kind of enough to let me take their picture.

This year’s version was Friday night. Sorry to say this year’s seniors didn’t scare anybody. Sorry guys, it is hard to scare people who expect to be scared.

Well that’s it for this week’s version. Check out the other participants finds, they are very creative!