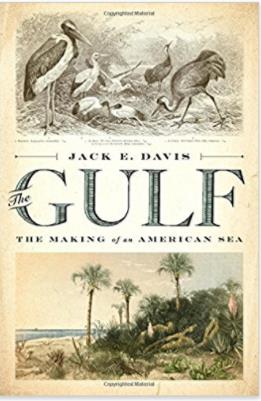 I just got through reading the “The Gulf: The Making of American Sea” by Jack E. Davis and the timing turned out great. The book is an environmental history of the Gulf of Mexico starting with the native Americans who lived along the gulf before contact with Europeans and ending with the present heavily polluted Gulf with highly populated and industrialized shores. 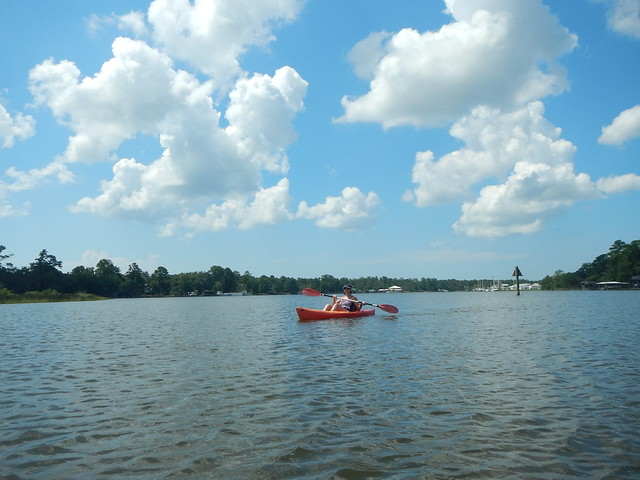 My wife kayaking on the Bon Secour River in Alabama

The book describes how the present situation came to be from an area that was beautiful and pristine teeming with wildlife and fish. 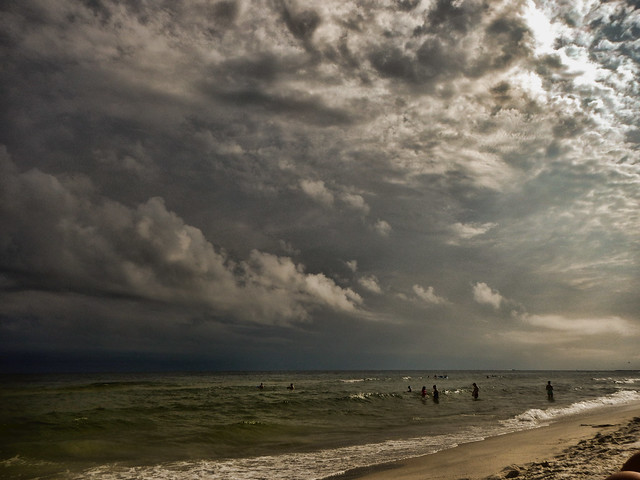 I learned that the Gulf of Mexico has an annual dead zone of almost 8000 square miles from Spring until Fall where the oxygen level is too low to support life. It comes from the Mississippi River basin where about half of the USA’s rural population and farms are. Phosphorous, nitrogen and other pollutants running off of farms, and maybe my front yard, drain into the Gulf via and use up all the oxygen in the water. 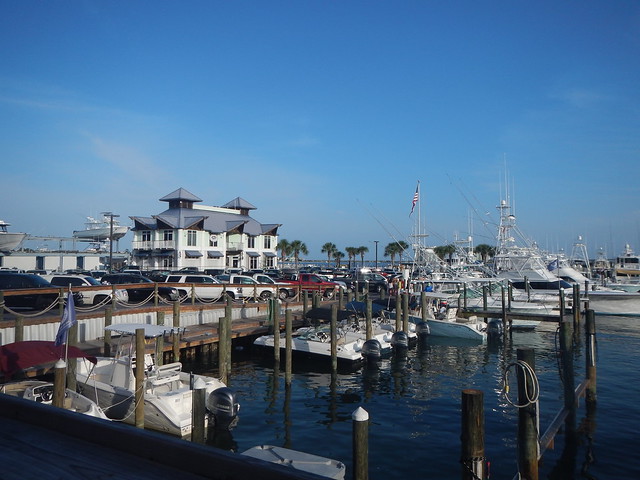 I learned that hundreds of square miles of coastal marsh has been filled in to create marinas and beachfronts for condo development. 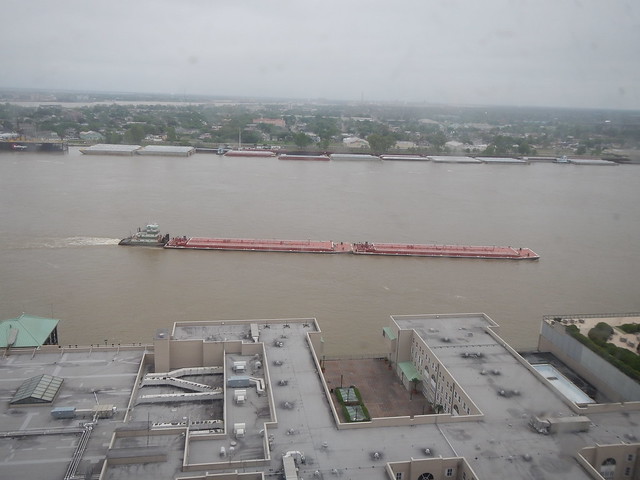 A barge on the MIssissippi River in New Orleans

I  also learned that coastal land is disappearing because of sea level increases caused by man made global change combined with man made modification to the coast that reduces natural barriers to storm surges and flooding. 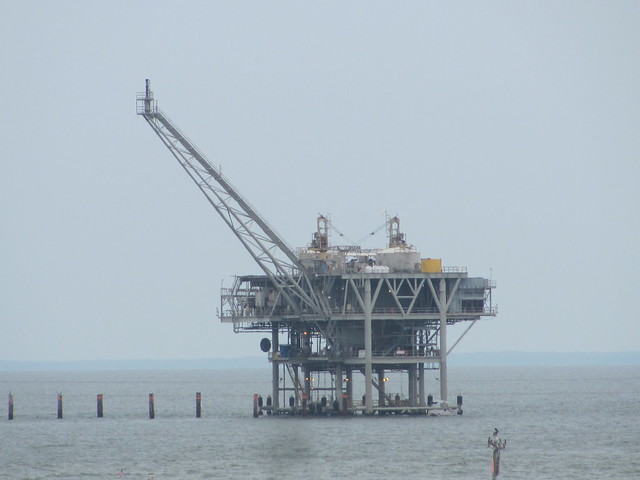 Davis writes about pollution from industrial activities such as chemical plants and paper mills.  He also writes about how with global warming that it is expected that we will have fewer hurricanes per year but they will be of ever increasing power and intensity.

This is a great, well researched, very readable  book that is sounding an alarm. Those of us that love the Gulf of Mexico should read it. I love it the Gulf. I spent the early part of my career building pipelines in and around the Gulf. I have fished its waters and love spending time there in the summer.

This country needs to get serious about climate change. it seems like every few years we have an unprecedented hurricane, more powerful than the previous ones. I am the first to say that one hurricane does not prove that global warming is happening but to me it is apparent that the extra energy in the atmosphere is having catastrophic effects already.

Jack E. Davis is a history professor, with an interest in Environmental History, at the University of Florida

The March issue of National Geographic has a great article titled “The Age of Disbelief” discussing the rise of skepticism about science and our increased polarization. I found it fascinating. 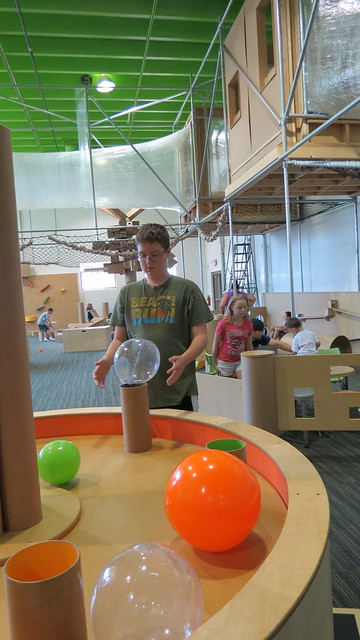 It delved into the beliefs and disbeliefs of Climate Change, Evolution, The Moon Landing, Vaccinations, and Genetically Modified Organisms. 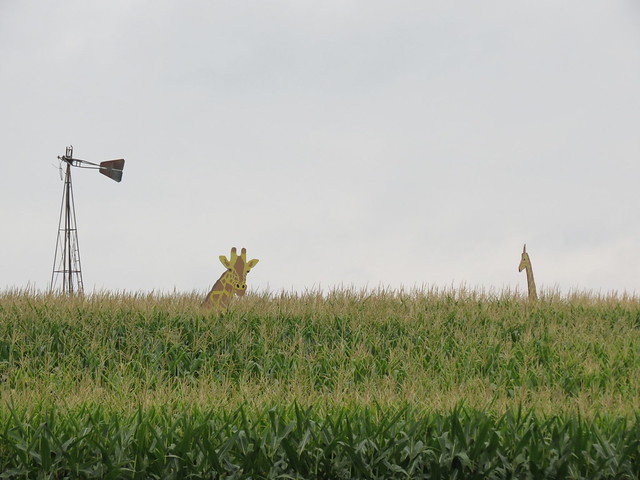 I liked the article because it delved into the reasons why people don’t accept science rather than attacking the people. Science, the article says, is often counter-intuitive. It doesn’t appear to make sense to us. Even scientists have trouble sometimes. 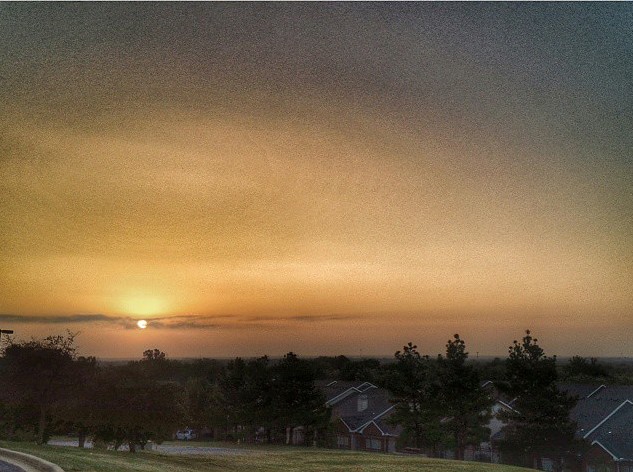 For instance, I know in my head and believe with all my heart that the earth revolves around the sun yet I can see with my own eyes that the sun comes up in the east and sets in the west. It takes considerable effort and the view of a night time sky to grasp the truth. That induces considerable awe when one begins to think about it and our place in the universe. 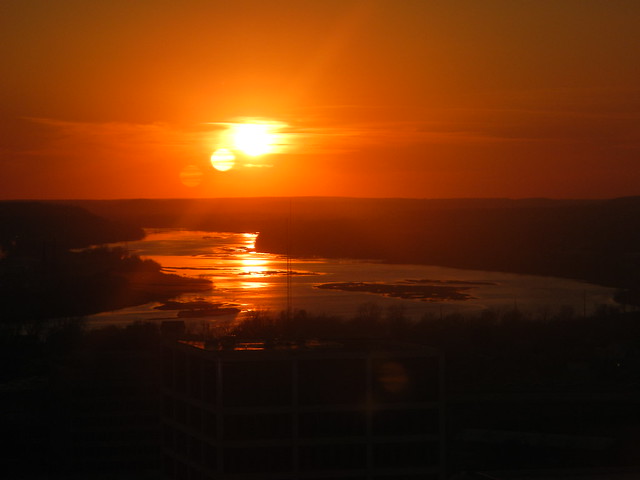 The whole evolution thing upsets lots of people. Many people don’t believe in evolution. The genius of the theory of evolution is that Darwin proposed it before we had any idea of DNA or RNA and all that. The problem of course with denying evolution is that one quickly moves to denying physics, chemistry, astronomy, and just about every other branch of science. 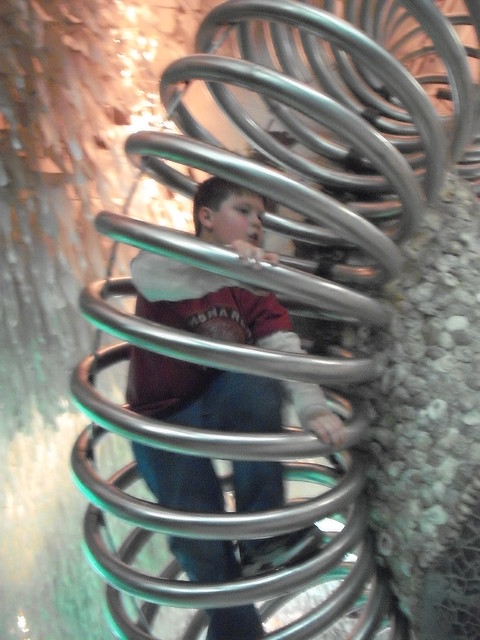 Logan at the wonderful City Museum in Saint Louis several years ago.

Vaccinations are another thing. Many well educated parents are not letting their children be vaccinated and that is endangering us all. The study published in 1998 in The Lancet has been thoroughly discredited but there are still many parents out there convinced that their children’s autism was caused by vaccinations. 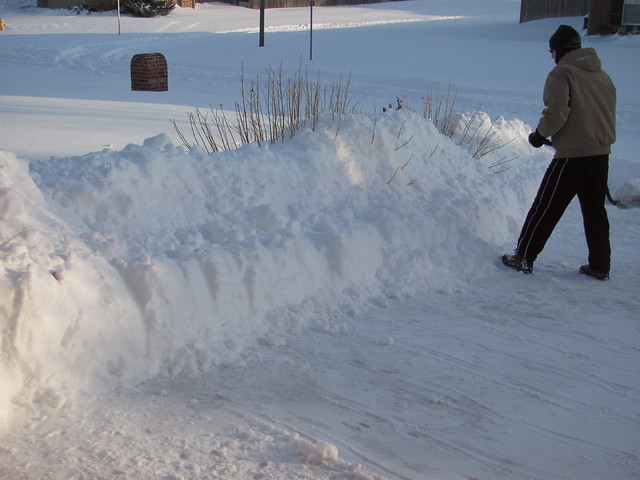 Climate change is getting a lot of press now. I’m a Chemical Engineer and I remember in my Heat Transfer classes  in school discussions in our classes and text about radiative heat transfer and how certain molecules such as carbon dioxide help hold the heat on the earth. They didn’t talk about global warming because that wasn’t a concern back in the 1970’s. 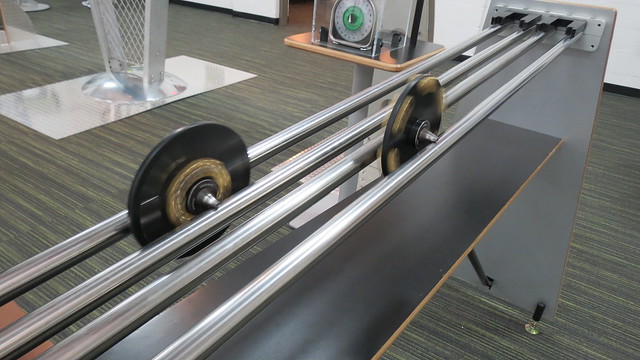 Closest thing to a lab photo I had.

Many people don’t understand that science is more than just a set of facts, it is a method. It is a method that eventually gets to the truth. Some of my creationist friends tell me that scientists are always changing their minds. Well, duh, yes. That is what you do when new facts force you to change your beliefs. 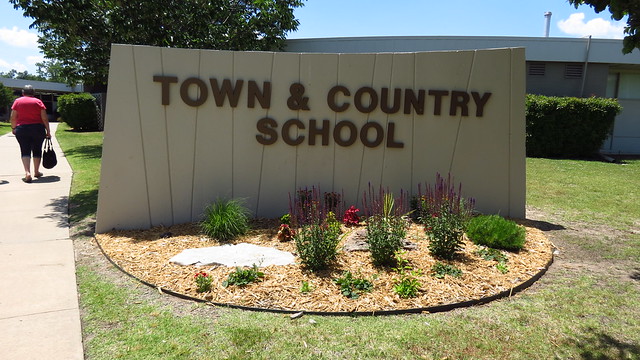 The article points to a kind of tribalism that affects beliefs. The article asserts that people believe things because their “tribe” believes them. I think they are on to something. I’ve been long fascinated how beliefs are grouped up to a great extent. So that it seems to me that many evangelical Christians are also Republicans and also believe in the right to bear arms, creationism, and support the Keystone pipeline. Other people are Unitarians, who tend to be Democrats, vegans, abortion rights, and oppose the Keystone pipeline. (Everybody understands I’m going extremes, right?)

So, the article asserts, we believe things in order to retain membership in our tribe. (Maybe that is why sometimes I feel like I don’t have a tribe. Let me see, I’m a Christian, who is ambivalent about Keystone, am a devout evolutionist. I think GMO’s are probably harmless but support labelling because I think people have a right to know what the heck they are eating. I firmly believe in human climate change but wonder about our ability to reverse the changes that are coming.) Anyways the article implies that the tribalism leads to polarization. And I think polarization is bad. 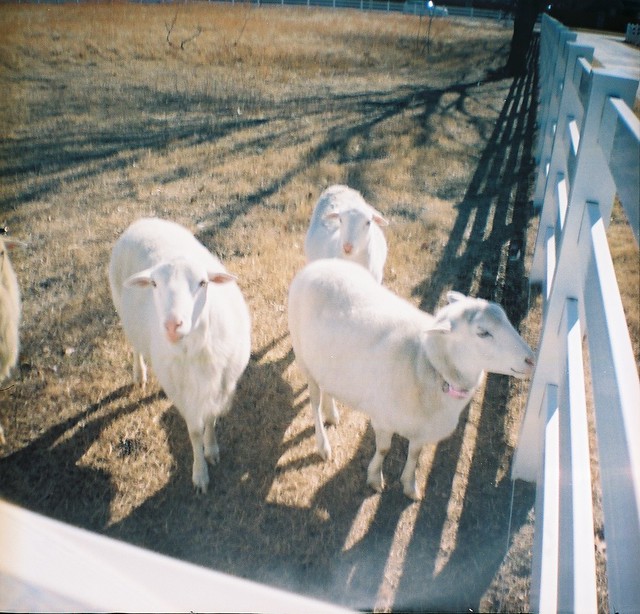 Non GMO sheep. These sheep are pets who will probably die of old age.

So maybe the way out is to talk with each instead of at each other. The older I get the more I think people are entitled to their beliefs. I also think that beliefs and acting on those beliefs have consequences. I also think that our often timid science education is partly to blame. Too many people don’t understand the scientific method and how unmerciful it is too erroneous thinking. I’m not a scientist, I’m an engineer and I’ve been to technical conferences where the debates about these technical matters really got heated. Science will win in the end. 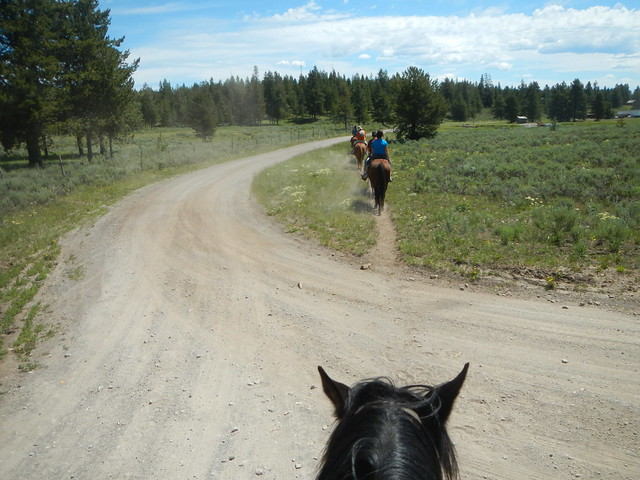 What do you think?

Additional Information: Infographics, I love infographics. I am all over information in graphical form.

Infographic on Americans Views on Evolution vs Creationism

America’s View on Evolution and Creationism (Infographic) | The BioLogos Forum.

Information on Vaccines and Autism

Are you still with me? How about another Infographic on the Scientific Method. I like it except it doesn’t show the feedback that often occurs between hypothesis and results. Scientists have to change their feedback if their experiement doesn’t work.

How does Scientific Method work? via Cool Daily Infographics

I have to tell you that finding a decent Infographic for GMO foods was hard. I hardly consider Monsanto and the American Enterprise Institute independent sources and I thought most of the anti GMO infographics were very sketchy and were also not independent. The university sponsored data were boring long youtube videos. Here is an infographic that I thought was pretty good from GMOAnswers.com 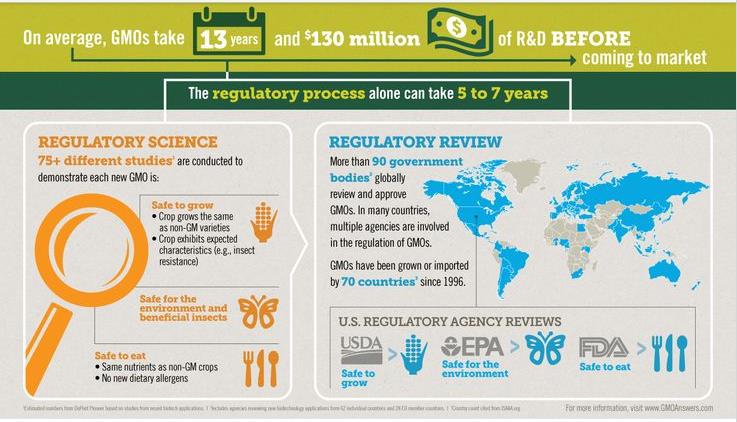