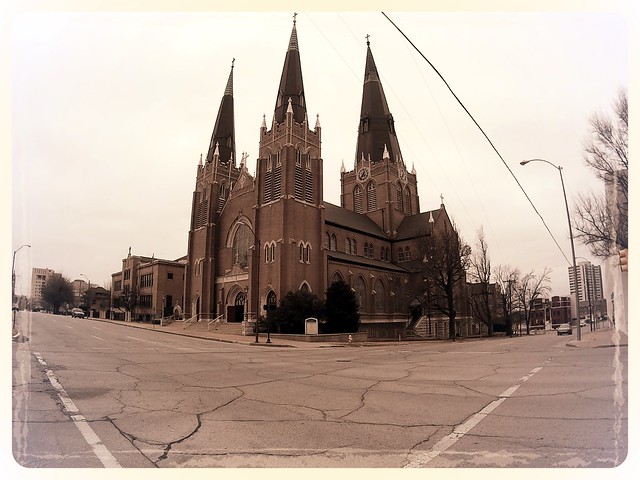 During my lunch hour it is my habit to take a walk for a little bit regardless of the weather. If I have the time sometimes I’ll make the several block walk to the temporary library downtown that has been set up in an old Safeway store. 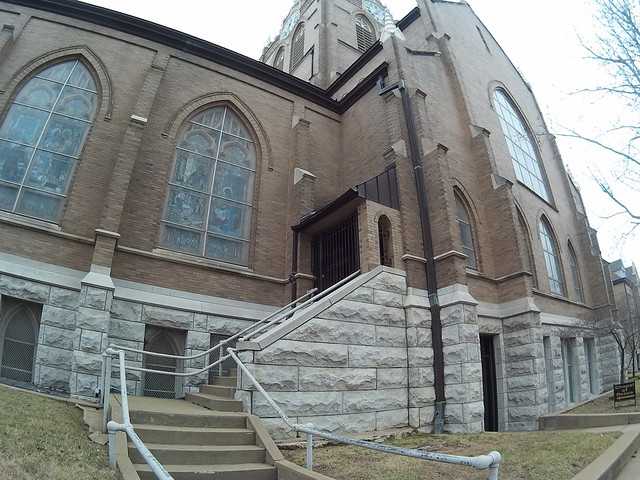 I like walking by Holy Family Cathedral. A huge Catholic facility that has an ancient feel to it. It has all sorts of side entrances and mysterious stairs. I’m into stuff like that. 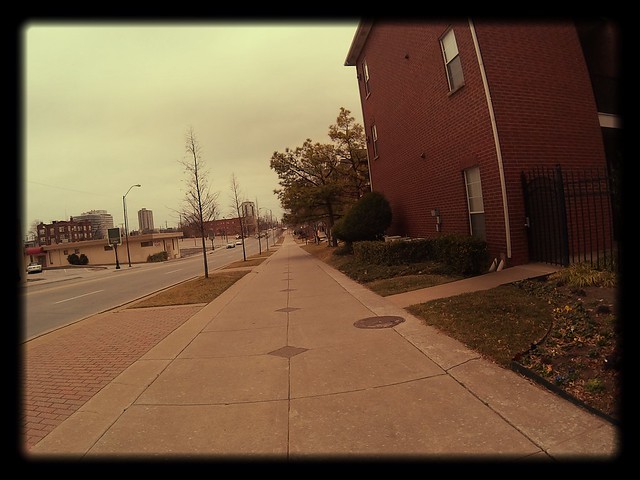 I make my way over to Denver Avenue, home of the widest sidewalk in Tulsa. 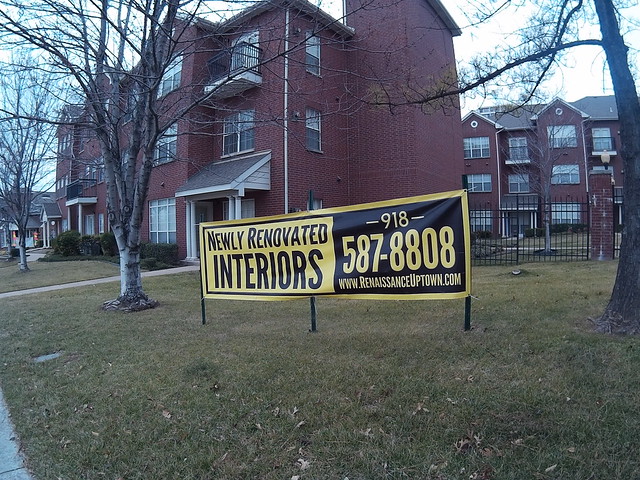 Denver is home to some newish apartments. I say newish because they are new to me but have actually been there for over a decade I think. Long enough to need updating apparently. At work, a lot of our younger employees live downtown. The pattern is that they do it for a little while and then realize that they can get bigger apartments for less money away from downtown. 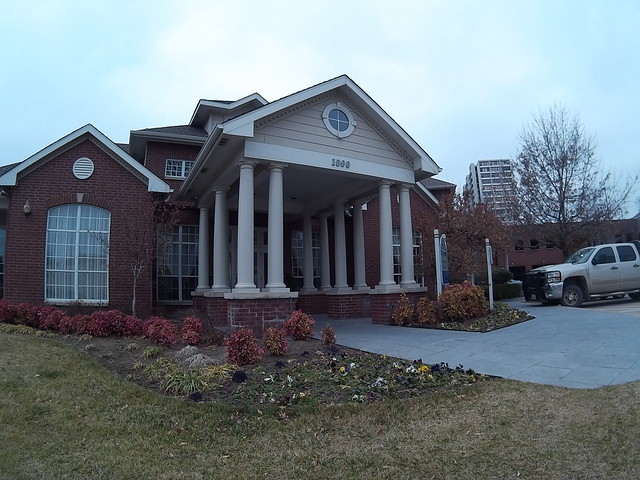 I wonder about this entrance. Why does the small structure take twelve columns to support it? It looks a bit unbalanced to me. 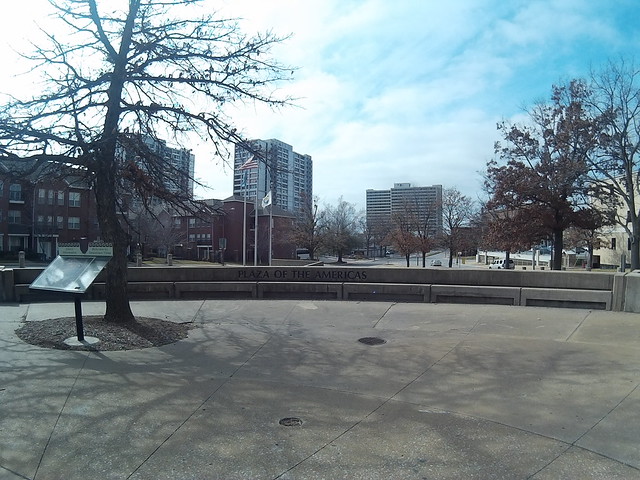 I pass by Plaza of the Americas. Today there were no spice addicts passed out here. This used to be a gathering place for them late in the day where they would wait for their connection to show up. Enough people have complained I guess that they have been dispersed. I know they found another spot. 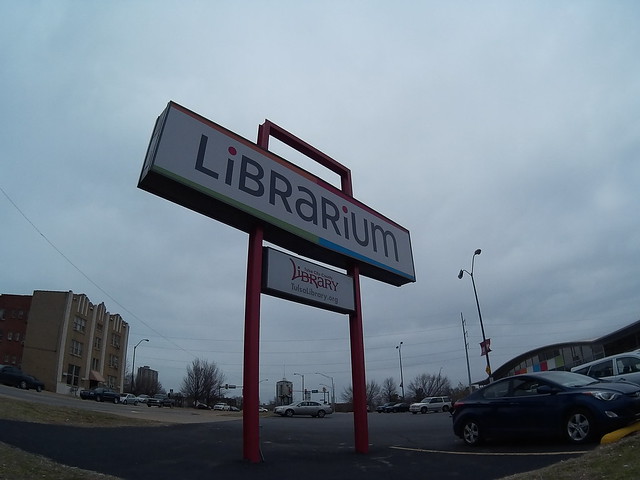 And here I am! 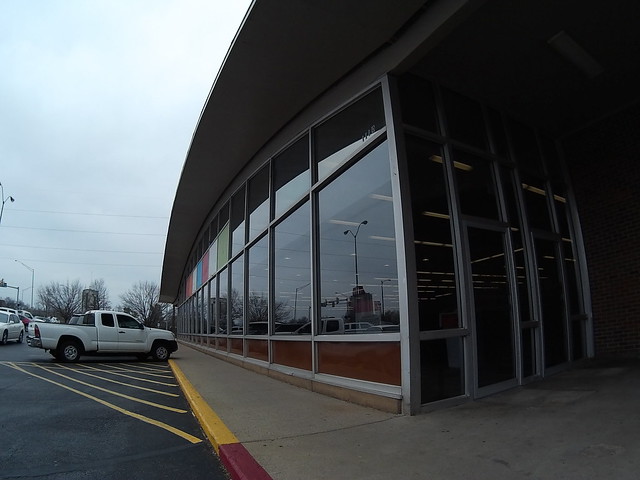 The old Safeway store. I stop in and use the wifi for my Ipod and check Words With Friends and Instagram. 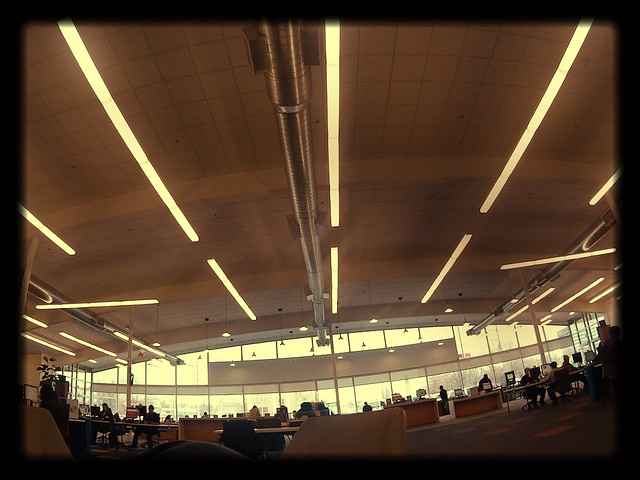 I really miss the big open grocery stores that Safeway used to have.

I’m a big fan of libraries. The new thing seems to be not oriented around books but focused on computers and internet access. Since most people have that at home now what you end up with for clients is pretty rough sometimes. Rough enough to have two security guards on duty who sometimes intercept people who appear to have been banned from the facility. The main library is undergoing a leisurely mostly unfunded renovation that will cost about fifty million dollars that will not be done until next year, if ever, and appears to continue the trend away from books toward computer terminals. I know that libraries are moving away from stacks of books toward other services but I’m wondering about the wisdom of making huge internet cafe’s where  people do not feel totally safe.

Of course, not everybody is as cynical as me. Here is an interesting, if a little dated (2013)  Infographic from Open-Site.Org on the future of libraries.

What do you think about libraries? 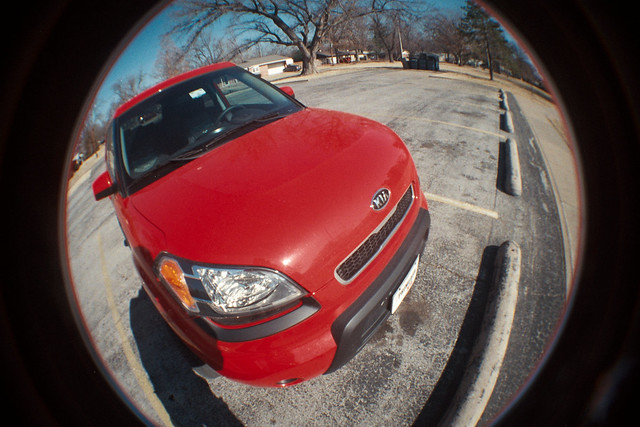 A sales strategy where the seller will provide opportunities to purchase related products or services, often for the sole purpose of making a larger sale. 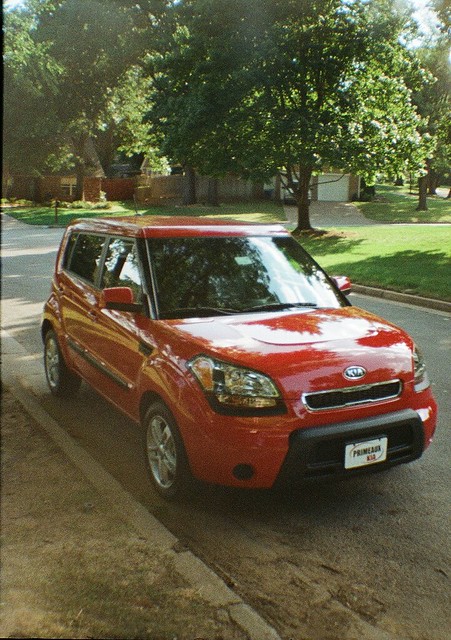 “…to try to persuade a customer to buy a more expensive item or to buy a related additional product at a discount.” (from dictionary.com) 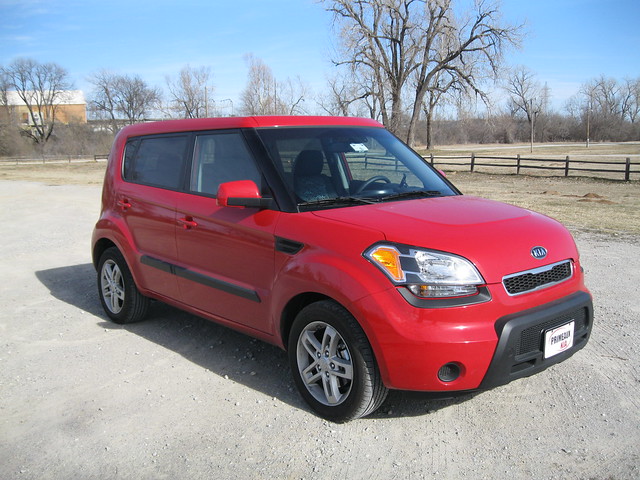 I got to thinking. In the three years I have owned my little Kia Soul, nobody has tried to “Upsell” me on anything. Some of my coworkers are actually embarrassed for me. Almost all of the kids at my son’s high school drive bigger and faster cars than me.

When I take it to the car wash though I get charged extra because it is a “plus sized SUV.” I love that car wash! What salesmanship!!!

I guess that I am a lot more glad than sad about that. I don’t miss it.

What about you? You want to supersize those fries? 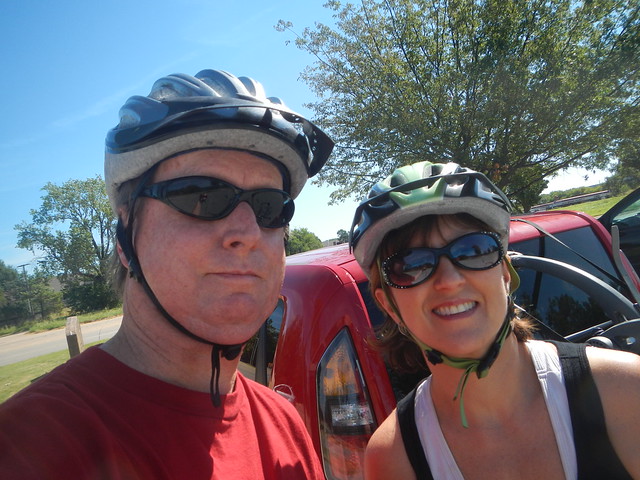 Last Friday I took the day off and Heather and I went for a bike ride on Tulsa’s Arkansas River Trails. Of course I had to take the selfie before we took off. Notice that the strap that holds the helmet on my head also packs up my double chins pretty well. 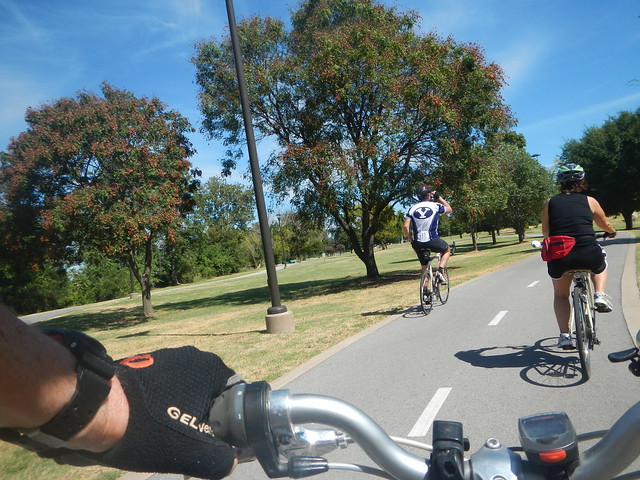 This is a YogiCam shot showing Heather on the right and a showoff zooming by with no hands on the handlebars. What do you think about guys like that. Personally I’m mad I can’t do it. Of course I’ve never tried it either. 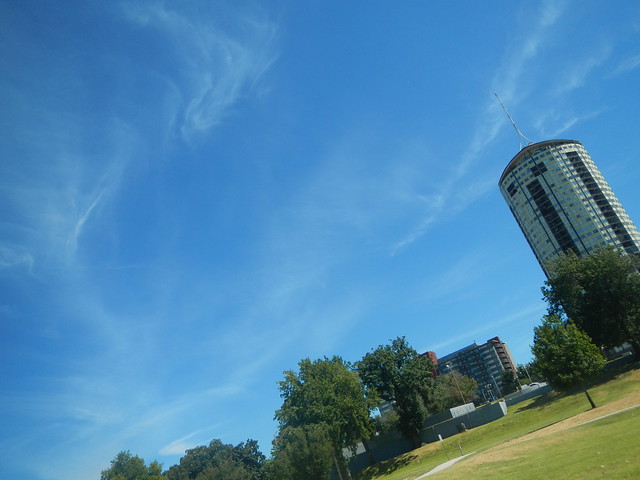 Ripping by the University Club apartments. I should have slowed down and took a better picture they are semi-famous. It was the first building ever designed with a computer. It did two years of calculations in 24 minutes. I don’t where we went wrong personally but things have gone the other way around. For example with PowerPoint you can take you days to put together a presentation that should take only an hour to put together. We’ve lost our way somewhere. The other thing that it is famous for is that a former resident is serving 25 years for pushing her husband out a window from their 17 story apartment. I don’t know about you but that doesn’t say much for computer designed buildings is what I think. 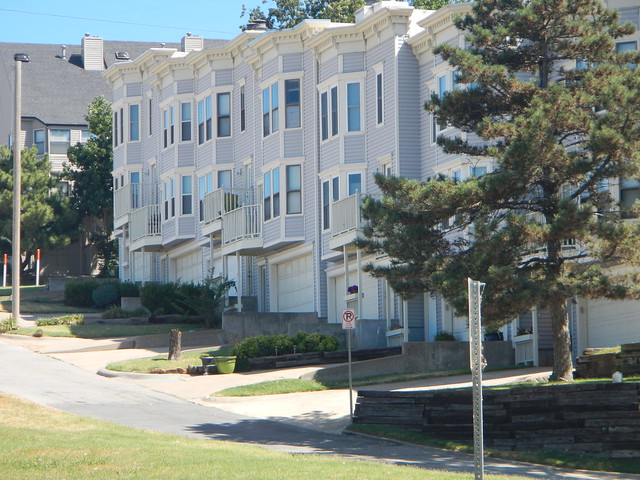 Here are some other apartments further up the river. No murders here that I know about. 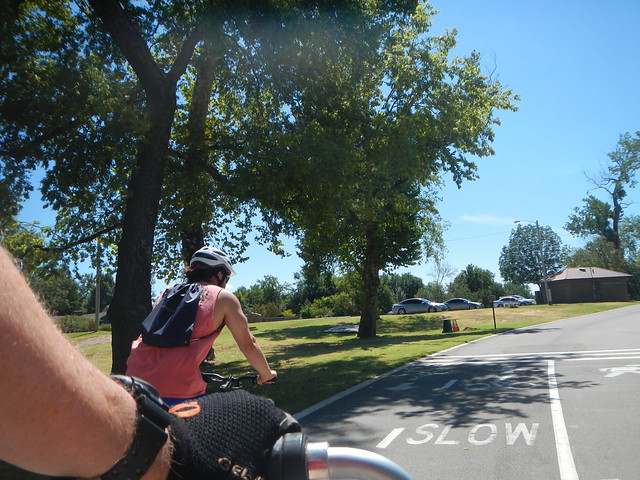 And then we headed back to the car so we could go pick up the kid at school.

Have you been on a bike ride lately? You don’t live in a computer designed building do you? With a volatile spouse? On a high floor? Poor you.