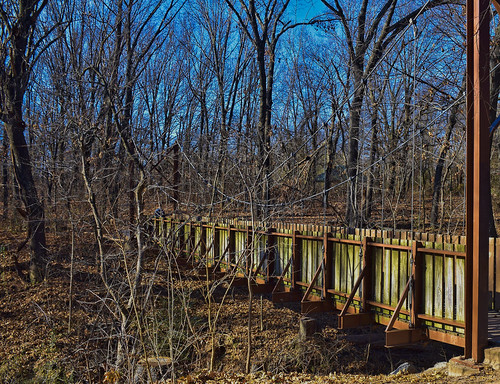 Found me a nice suspension bridge at the nearby Ray Harrel Nature Park. All great nature parks have nice bridges, right? 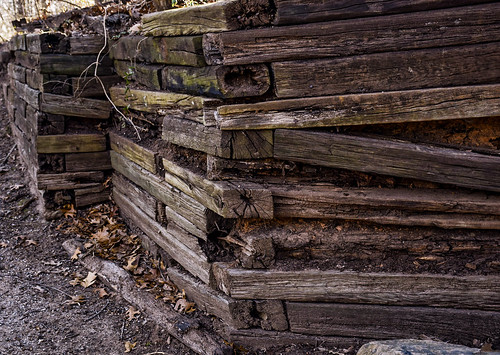 I love railroad tie retaining walls. The look all old school and woodsy. They end up kind of blending in and becoming part of the landscape. 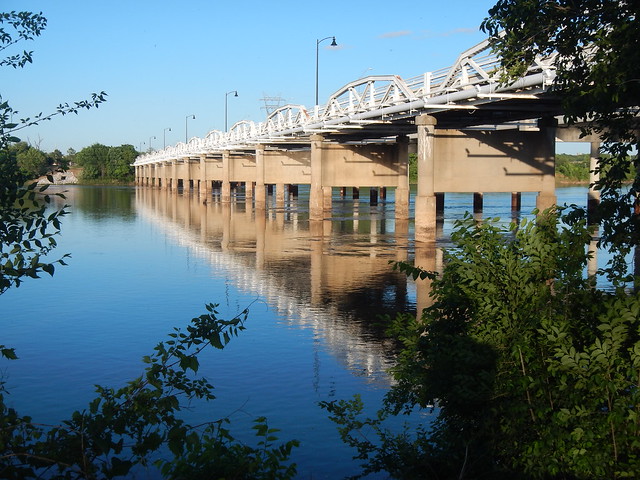 The Jenks Bridge, now limited to pedestrians and bicyclists.

I haven’t been to Turkey Mountain in a month! What with traveling and conferences and this and that and whatever I have missed my coveted Wednesday after work run. When I went to change into my running clothes I found that I forgot my shoes. No problema I thought. I’ll just drive home and get my shoes and change and head over to the mountain and it will be fine. 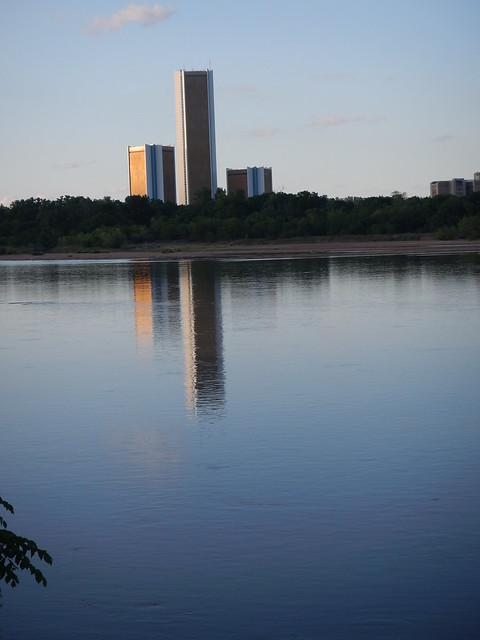 The former Oral Roberts University Hospital and Medical School, now an office building. If you think it is tilted just tilt your head.

Except, their was a huge traffic jam on the Broken Arrow Expressway and it took me an hour to get home. So I decided to “plug back and abandon” (that is fricking fracker talk for giving up the original plan) and go for a shorter run. I was under time pressure because I needed to pick up Logan at a certain time. So I was a little put out at myself at first but as I got into the run my cares just disappeared especially since I had some time to take some pics on the run.

So yep, one can have a decent run along a turnpike. I’ll be on Turkey Mountain Friday morning!! I am double checking the shoe situation.

Some of the things I’ve been doing lately. 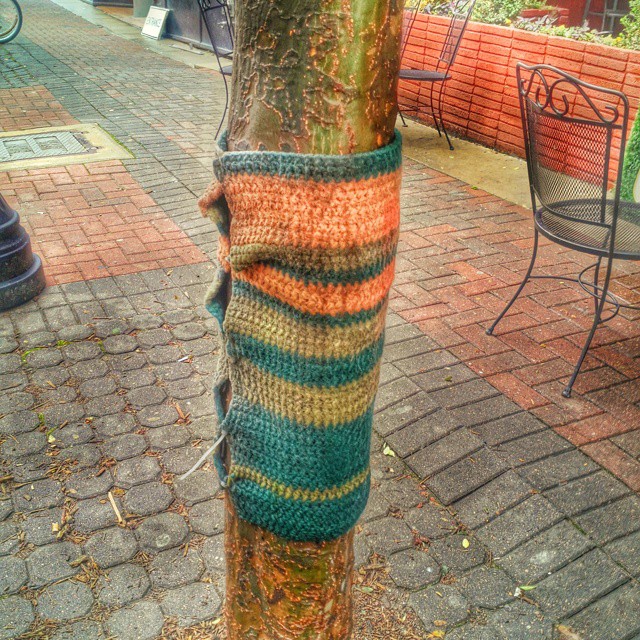 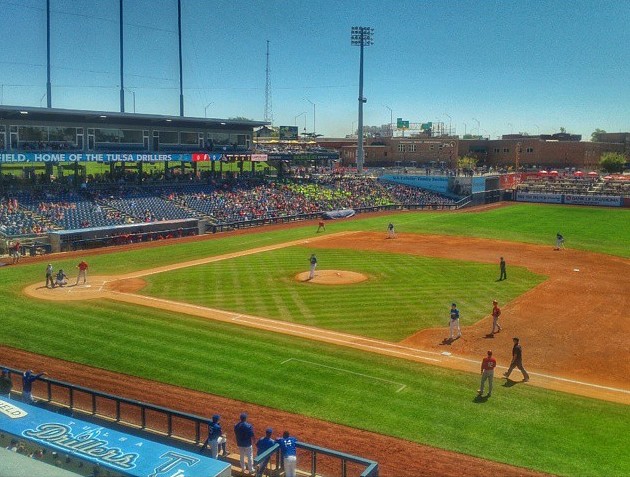 Monday at the Gas Company we had our annual team building exercise. We go a daytime Tulsa Drillers AA baseball game. They feed us and we get to spend the afternoon watching the game. And then we have to go back to work cuz I work until 6. It is a very nice break in the middle of the day especially on a beautiful day like we had today. The Drillers lost one to nothing. It’s like cmon guys. You can’t score one run?? 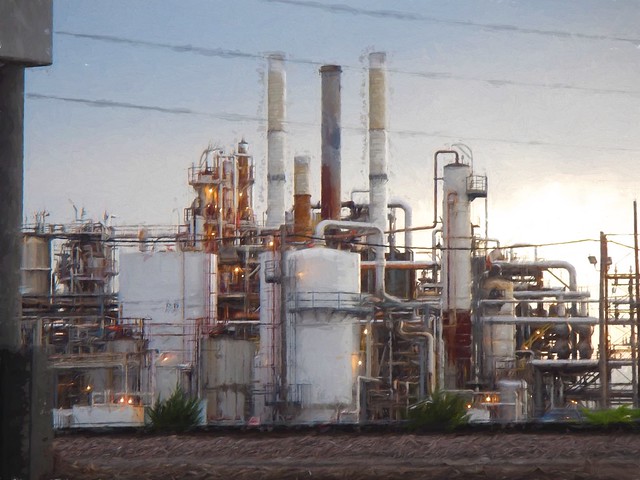 We have had a lot of rain the last week and lots of storms and in central Oklahoma some tornadoes. One day we had flooding and tornadoes and some big cats got loose at one of those low rent ripoff private zoos.  We even had a tragic accident where somebody died in their tornado shelter. I’m telling you Oklahoma weather is pretty wild plus now we have earthquakes. The reason I’m telling you this is because on Wednesday instead of going for my regular long run on Turkey Mountain or the river I went on a short run of only about three miles. For part of the run I went where I wasn’t supposed to and got a good picture of one of our local refineries. Being the chemical engineer that I am I just love refineries and I think they are beautiful. What do you think? 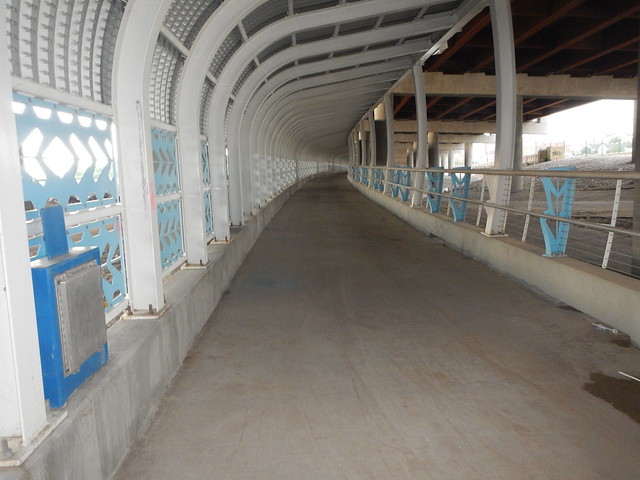 While I was over where I shouldn’t have been I checked out the new not opened pedestrian bridge across the Arkansas River.  I thought about running down there and seeing what I could see but I didn’t like the big curve that hides the end. I mean, who is just around the curve. Bridges are creepy enough already. So I will delay my run across the bridge until I know that it is open. I’ll let you know. 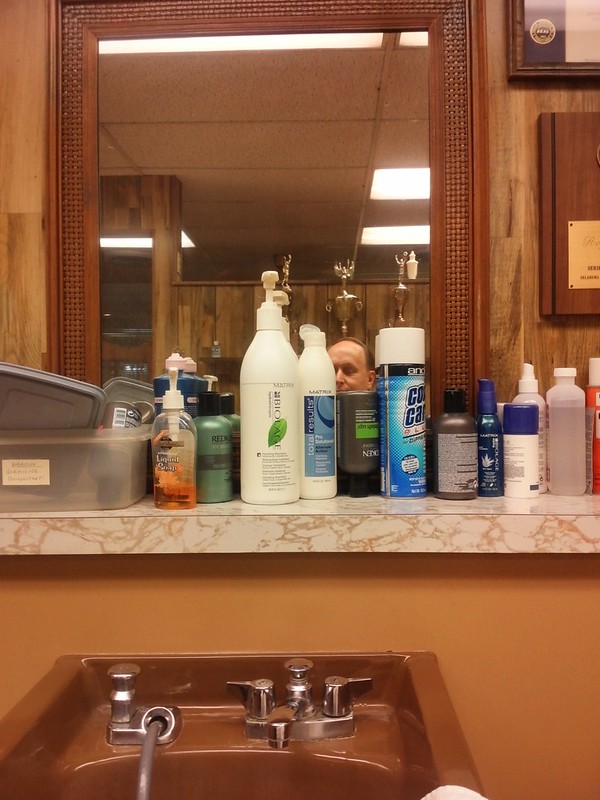 Next, here I am at the barbers. Rozetta and Billie at Antonio’s in the Petroleum Club Building have been cutting my hair, or what is left of it anyway, for 23 years. Anyway, I was getting my hair cut  because it was picture taking day at work. My official picture was taken fifteen years ago when I started work and I hated it. So I needed to make the most of it and so here is the new pic. 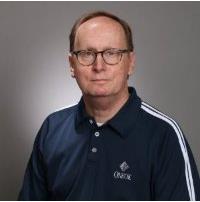 So here it is!! In case you are wondering, that is my smile, thank you very much.

And my job has changed. I am now helping develop projects and am less involved in the commercial area. it’s a good change for me. I had the job as Director of Gas Supply for Oklahoma (and for several years Kansas) for about 13 years and although I loved it, I’ve been ready for a change. I’ll be working with many of the same people I was before helping develop projects to achieve our commercial goals. Projects like pipelines, compressor stations, natural gas processing plants and all that other fun stuff.

Hey, have you had any changes lately? Tell us!