Logan has been gone to camp at Falls Creek since Monday. It seems like a long time. We are missing our gentle giant of a son.

Heather got a text from the Youth Director indicating that Logan is having a great time and the YD is really enjoying Logan’s quick sense of humor. Of course that made us feel good. We know better but we had visions of Logan being all alone and miserable in this huge camp of over seven thousand kids including well over a hundred from the group he went with to the camp.

And the sense of humor thing. We know that the Logan we see is different from the Logan his friends see. We get glimpses of the other Logan from time to time and of course we like both sides of him.

Anyways we are looking forward to the whatever Logan steps off the bus at midnight Friday here in Tulsa. We miss the guy.

He took his camera. I hope he is taking some photographs. Maybe I can post a few this weekend.

I’ve redone this post. I dashed the original post out this morning before we started our crazy Saturday. As I thought about it, I realized how selfish I am so I’ve redone it. I’m still selfish, just a little more thankful for my blessings than what I was this morning.

It has been a frustrating week. I don’t know where to start.

First I guess is the botched execution that we had here in Oklahoma. A total fiasco from the word go and the condemned man was basically tortured to death. Many of my fellow Oklahoman’s think it was just deserts and it doesn’t bother them. There is a new line among some that executions are not supposed to be pain free. Aren’t we better than the ones we convict though? I don’t get it.

Our governor is investigating. She is a nice lady but she is going to run for re-election and she is scared to death of getting outflanked on the right.

You know something though? I’m thankful to live in Oklahoma. I have been here 28 years and I love the State and the People. They are the most generous, most down to earth people I have ever met. We’ll get through this execution fiasco.

On another note, I went on a business day trip to Houston this week. Made my own reservations, messed it up, all my fault, so I ended up daisy chaining on standby back to Tulsa. Kind of stressful, but hey, I love Southwest Airlines. They may herd us like cattle but the employees are helpful.

I may have been a little stressed about getting home but I’m glad that I had great home and wonderful family to come home to at the end of my journey.

And I wasn’t being sarcastic about Southwest Airlines. They gently showed me my mistake and then went to work figuring out a way to get me home. What more could I ask for?

Oh yes, we have to us OptumRx for our maintenance prescriptions. Their employees are nice but they don’t have much to work with. It took 20 minutes on the phone to get a new prescription going. I told them that it takes three weeks to get medicine to me. They denied it. So we went over the calendar.

Two days for a prescription to be entered into their system. Starting the day after they get it. So yesterday was the second, and so Tuesday the sixth they will have it in their system.

Then they call me to confirm that I want it. They call me the day after it is entered. So we are on the seventh.

Then seven to ten days to deliver. Starting the day after I confirm that I want it. So that is the eighth.

Yes, you are right OptumRx. It is only about two to two and a half weeks. I beg your pardon, I’m sorry.

You know, I’m just glad that I work for a company that provides insurance. I just have to do a little more planning on the online pharmacy thing. And the cost is ridiculously cheap. Three months worth of medicine for $11. Are you kidding me? Lots of people spend more than that per dose.

This week wasn’t so bad, it was good. Next week will be better. I’m watching you OptumRx!!

What’s irritating you this week? What are you thankful for this week. 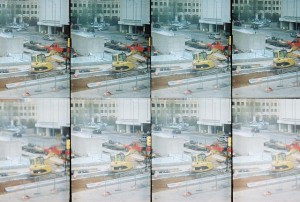 This is from my second roll on my brand new Lomography Oktomat Camera. A plastic camera that has eight lens and shoots eight shots in about two seconds on a single 35 mm frame. I’m still working my way around the camera. The above shot is of the plaza of the office building where I work. They are busy with a construction project rebuilding the plaza. I just love construction sites. 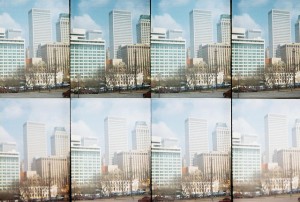 I like this skyline shot as well. I’ve noticed that the clearest sharpest picture is generally the upper left and the most faded out blurry pic is on the lower right side. I have a feeling that that is just the way it is. Part of the appeal of Lomography to me is that you there are very few adjustments to the cameras. They are literally point and shoot. 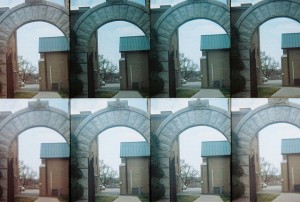 What can I say, I love arches. There is something almost spiritual and inviting about them. They are like beckoning to a quiet sacred place. 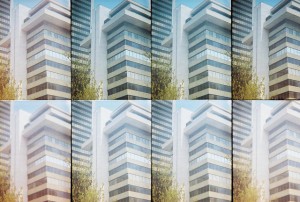 I love the stacked domino appearance of this shot of Tulsa’s Petroleum Club Building. I also like how the color changes noticeably from frame to frame. I guess that I’m easy to entertain.

I’m still learning what kind of pictures are suited to this camera. The failure rate is high. 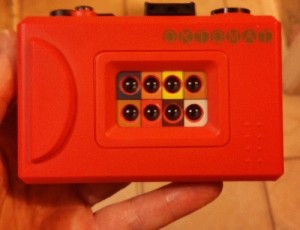 I got a new Lomography camera for my birthday from Nana, the world’s greatest MIL. This one is a 35mm film camera with eight lenses. It has adjustments at all. It has a fixed focus and there are no exposure adjustments, no flash, or even really a viewfinder and is certainly not wifi compatible. To take a pic you cock it and press the button and it operates a shutter on each of the lenses over the course of two seconds. Yep, pretty useless and I think that I’m going to love it.

I shot my first role in western Oklahoma during our weekend visit there. We were out visiting cows and donkeys. 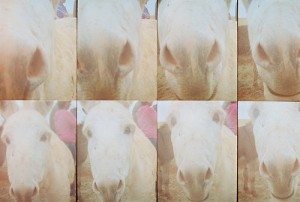 Nolan the donkey thought it pretty interesting until he figured I wasn’t going to feed it to him. 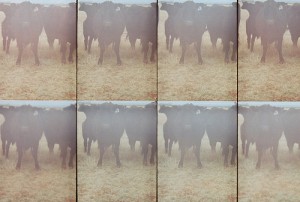 The cows were not impressed either. 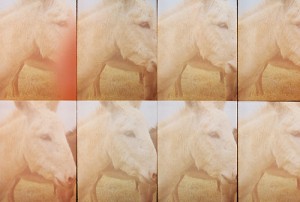 Then Nolan was like, “Here is my good side.” I got a little thumb action or something in there on one frame Nolan, sorry. 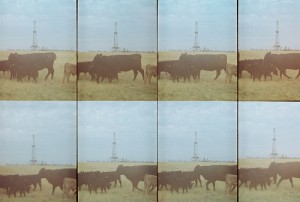 And then the cows wanted me to show their good side also. Good grief, can’t those critters get along. 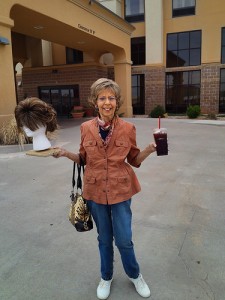 Thanks for the new camera Nana! She is a MIL who has a good head on her, uh hm, shoulders?