So I have been scanning old photos again. I have a photo scanner that makes the front end go lots faster than trying to do with a flat bed scanner.

When I was a sophomore in high school in Albuquerque I went on a two week trip to Mexico City. It was a big adventure. Several busloads of my fellow students rode busses to El Paso where we switched over to Mexican busses and then rode pretty much non-stop all the way to Mexico City.

That was back before the drug dealers ran things and we went all over town, riding the subways and busses and didn’t give a thought in the world to our safety. Being a parent now though I realize why the teachers and chaperones were in a bad mood the whole time.

And I found this photo of my mother from the late 70’s. She was a lot younger then than what I am now!! She’s been gone a number of years. I miss her every day.

I hadn’t gone through this particular album in probably over a decade. I scanned the photos I wanted and threw the rest away including the album. Part of our continuing decluttering process. I got them all tagged up on the cloud if I ever need them. I love looking at old photos.

I am still scanning our old film photographs. I’m doing about four of five rolls a day. Doesn’t sound like much but it is,  especially the tagging and sorting so I can find these things out of my over 40,000 pics on Flickr. This morning I scanned pics from our beach trip to Florida back in October 2001. Great thing about a kid not in school yet is that you can take trips on off peak times. 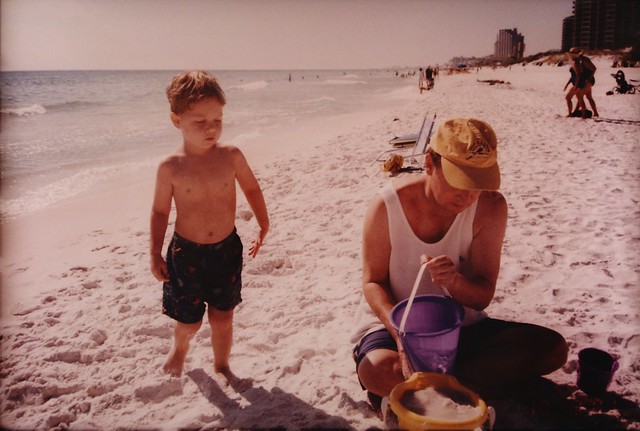 Here is Logan the sand castle destroyer waiting for dad to build another target for him to stomp on. 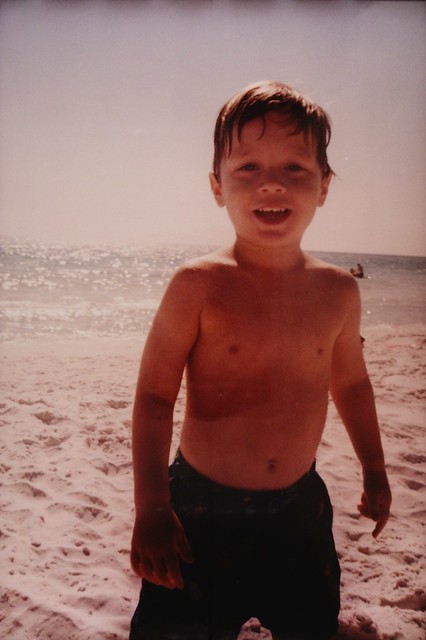 He has always been a happy little bugger.  He especially likes the game of making a monkey out of dad. 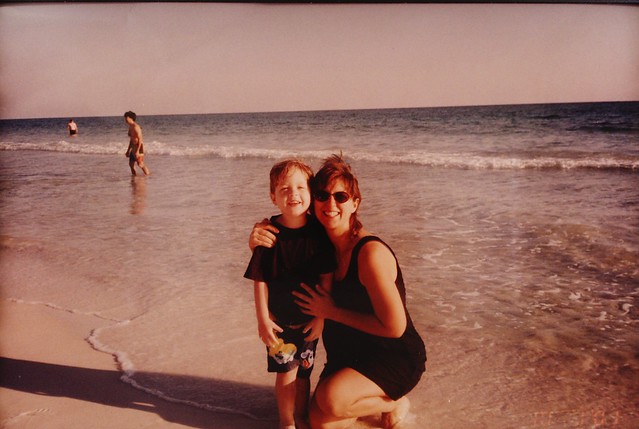 Here he is with his mother. They have always had a special bond. 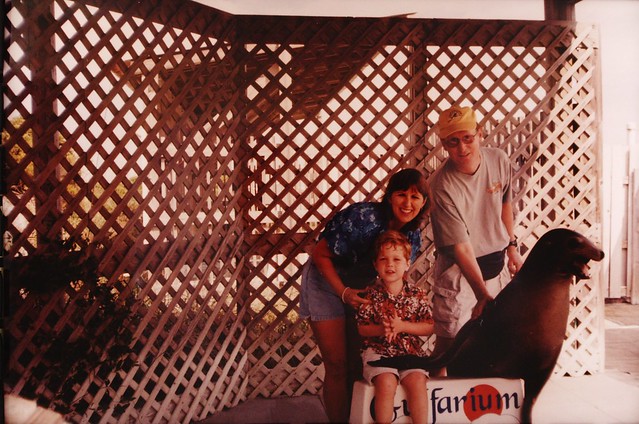 I had forgotten about this. We went to something called the Gulafarium and after watching the dolphins and seals do there thing we got our photo taken with one of the performers.

Do you like looking at old photos? I sure do. 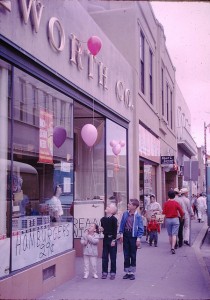 I’ve been a bad blogger lately and I’m sorry. I’ve been traveling. I used to prepare posts in advance for that but I don’t generally any longer. I like the interchange and conversations with other bloggers and it is hard to do when I am on the road or visiting somebody. Plus it is nice to get away a little bit and refresh and get more ideas and photographs and stuff.

The family went up to Idaho for a family reunion and to visit my Dad and we had a great time and I’ll be posting about the trip in the coming days.

I took my fancy schamancy all purpose scanner with me and scanned several hundred of Dad’s slides from the 1950’s and 60’s while I was there. The above photo is one of them. The little girl is my sister Ellen (Check out her blog News from the “Pole” Yard), then me to the left, and brother Bob to the right. It is on the square in Santa Fe and I’m guessing that it is 1962 or 1963. Santa Fe back then was a tourist town sure but real people lived there back then and they did their shopping downtown in amongst the tourist shops.

Note the 29 cent hamburgers, and the guys walking down the street with their cowboy hats on. Also note the rolled up cuffs on the jeans Bob and I are wearing. Anyway, there has not been a dime store on the square in Santa Fe for decades and I’m sure that it is some sort of expensive art gallery now. Hamburgers are probably a bit more than 29 cents also. 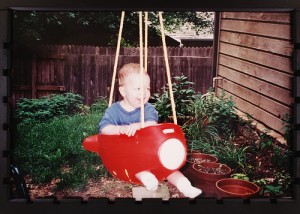 SuperPizzaBoy close to his first birthday. He is still a happy kid and he still likes to swing.