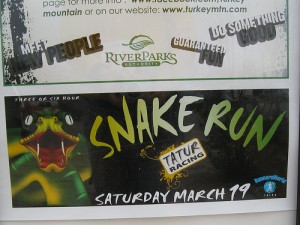 The Tulsa Area Trail and Ultra Runners (“TATUR”) had their annual Snake Run on Saturday. This run is a little different. Most runs one runs a fixed distance and how you place depends on how fast your ran the fixed distance. Everybody runs the same distance but different times. In the Snake Run everybody runs a fixed time and tries to maximize the distance. There were two times one could pick, three hours or six hours. 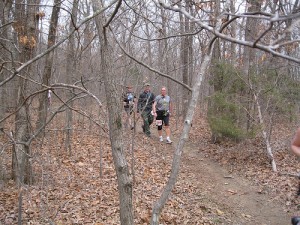 It is also a trail race not a road race, run on a relatively flat area of Turkey Mountain. They had two loops, The big loop was about four miles long and a smaller half mile loop. The idea is to run the big loop as many times as you can, when there is not enough time for you to run another big loop you run the small loop until the gun goes off. You get no credit for partial loops. So there is a little bit of a mental edge to the run. 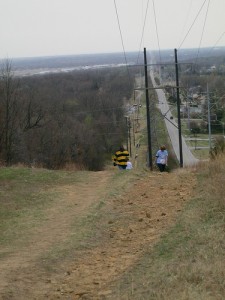 Of course being a Trail Run they make even the parking fun. See the cars way down the hill on the left. That is the parking area. Everybody is walking up the hill to get to the start. 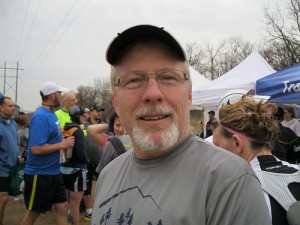 He and Brian of RunnersWorld Tulsa started the race and off we went. Brian is a good guy also. He told me that he peeked at my blog every now and then. That is how I know he is a good guy. 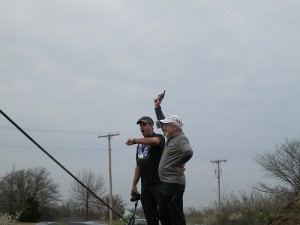 I just love trail runs. You get to run through the woods! What’s wrong with that? 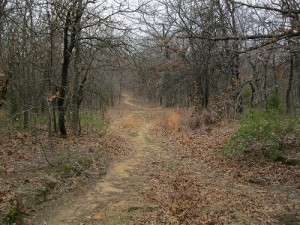 I had planned to run just two loops or eight miles but I settled into a pretty good run walk rhythm that I carried on through the whole race. I would run 0.20 miles or about a 1000 feet and walk 0.05 miles or about 250 feet. I had my GPS running watch so that’s how I knew how I was doing. 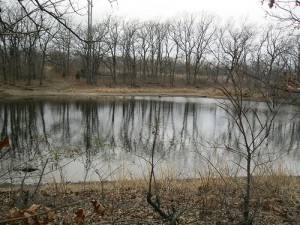 So I just put my brain on autopilot and let the watch tell me when to run and when to walk. So I was able to get into my trancelike meditative state and just be in present. I had only two hiccups to my trance. I tripped on root and fell. Nothing messes up a trance like a face plant into some dirt. Also, somebody was handing out little liquid energy drinks. I tried it and lucky for me I was close to a comfort station so I could get a little comfort. That stuff ran right through me. I was able to get back in the groove pretty quickly into my trance. 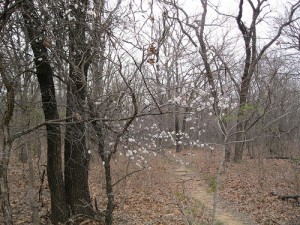 So I didn’t take too many photos. I finished two big loops and then started running the small loops. I think I must have run about 8 or 9 of them. I hadn’t seen the results yet so I’m not sure how many I ran. 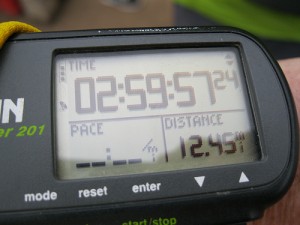 I finished my final small loop 2.76 seconds before the gun went off, so I didn’t waste any effort. When you are as old and fat as I am, you darn sure don’t want to waste any effort. I was very pleased with my effort. I haven’t run 12.45 miles since the 1990’s when I was running marathons (ok, only two marathons) and a bunch of half marathons. So I’m thinking about training some more and maybe runnning the half marathon part of the Oklahoma City Marathon coming up later this spring. Maybe a 25K trail run. Maybe I have a few miles left in me. 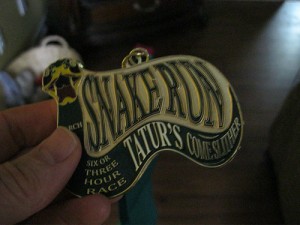 I got a nice participant medal for my effort. As you all know, I am the king of participant medals. One of these days I am going to just buy my a trophy just so I have one. The young man who won the three race ran 25 miles. Incredible, he ran almost marathon distance on a trail with rocks, roots, and stumps. 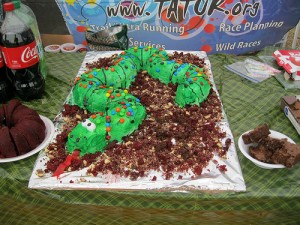 TATUR and RunnersWorld Tulsa certainly know how to put on a race. They had all sorts of goodies during the race and after there was barbecue beef sandwiches, soda pop, malted barley flavored gatorade, brownies, chips, all sorts of stuff. A bunch of volunteers showed up and worked hard making sure that everything ran smoothly. Trail Zombie and Brian were here, there, and everywhere making sure that everything went well.

Of course, I had to make my way back to the parking lot. I had a lot of chores at home to do. Sweetie took this pic of me working hard. 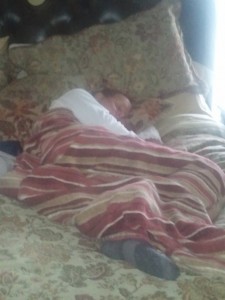