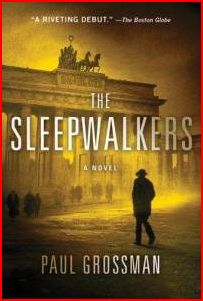 The Sleepwalkers is a crime/suspense novel set in Berlin in the early 1930’s when Adolf Hitler and his Nazi Party were preparing to take over Germany. Berlin detective Willi Kraus is assigned to investigate the death of a drowned young woman who was pulled out of a river with bizarrely surgically altered legs. As Kraus pursues the investigation he starts to uncover a vast and deep conspiracy of evil.

Willi Kraus is a sympathetic character and that is what kept me going. I didn’t find the book very suspenseful. Kraus is supposed to feel hemmed in by the conspiracy but there was nothing that indicated that except the character saying it. Suspenseful scenes ended abruptly or had other unsatisfying ends. It was a frustrating book to read in some senses.

I give it two stars out of five. I liked the characters, I loved the back story about Berlin in those times, but not the story too much.

I feel like a traitor. St. Martin’s Griffin the publisher gave me this copy to review. Sorry guys! I appreciate it though.

2 thoughts on “The Sleepwalkers by Paul Grossman”