A couple months ago or so I started a new Tumblr blog. It is just for images and nothing else. The only text is the name of the photo and some tags. People don’t even comment.  You can also search for images on tumblr and then reblog those or you can hit a heart button to “like” the photo.  The site keeps a running total for the likes and reblogs for you and some of the images have been liked and reblogged thousands of times. I like the site but there is no relationship building like in regular blogs where you get to know people.

After a short time I learned what kind of photos are popular on tumblr. Bright colors and geometry sells! So I found a photograph of a boot display I took last year and massaged a little to boost the colors and darken the edges and posted it So I posted it on my tumblr site  and in less than 12 hours over eighty people had reblogged it. 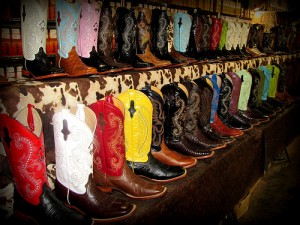 So, who are these rebloggiers? Most of them young women aged about 18 to 28 it appears who just love anything country, cowboy, trucks, jeans, guns, true love, and boots. Their sites are exuberant and full of life. Check out http://kissmycountryass.tumblr.com/, http://midwestern-darling.tumblr.com/, or http://hicktownprincess.tumblr.com/.

I posted the photo below from Flickr Commons. I loved the color and movement and the abandonment of the dancer. 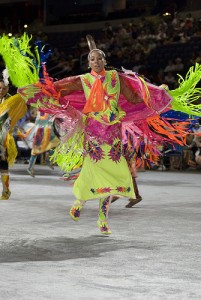 As you would expect it was a totally different group of people primarily Native Americans judging by the content of the blogs. About 31 reblogs so far. I learned a lot going through their sites. First, opinion is sharply divided on the neon regalia of the dancer. Second, what really makes many Native Americans angry are people who take photographs during pow wows when they are asked not to do so. Lesson learned for me!

Yogi’s Den will always be my main blog but it is fun to experiment a little. I think of tumblr as a photographic exchange. I’m sure that all sorts of copyrights are being violated.

Do you have a tumblr site or more than one blog? How does that work for you?

9 thoughts on “These Boots Have Legs”