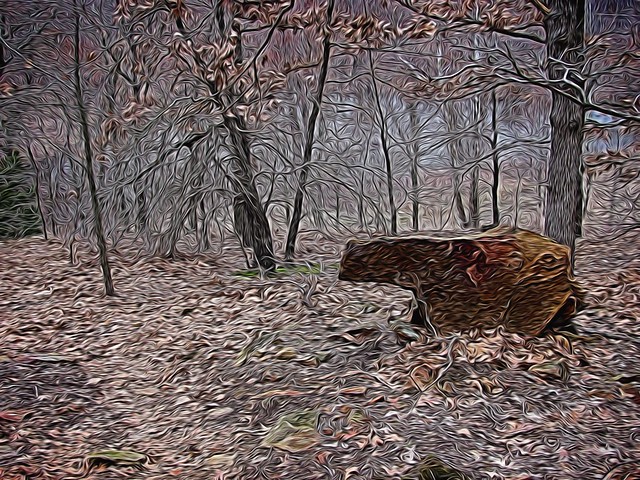 The Oklahoma Rock is a landmark deep into Turkey Mountain. If you haven’t found it yet, and it is not hard to find, then you really haven’t had the full Turkey Mountain experience. Lots of legends about this rock. One or two of them might be true. Otherwise you have to believe that the Native Americans here before the arrival of the white people already knew what the state would look like.

It is also part of a popular geocache. It is an offset cache where you go so many feet from the rock in the direction that the rock is pointing. That’s great except the rock has been pushed over and propped back up so many times that that doesn’t work. I found it by searching in an arc of the required distance around the rock. Even then it took me several tries.

Fortunately for us Oklahoma Rock fans it is not on the property proposed for an outlet mall. At least for now.

I ran the photo through Topaz Glow. I have seven days left on my free trial. I still haven’t decided whether I’m going to buy it or not. They should just let you use it for free until you decide to pay it. Don’t you think?