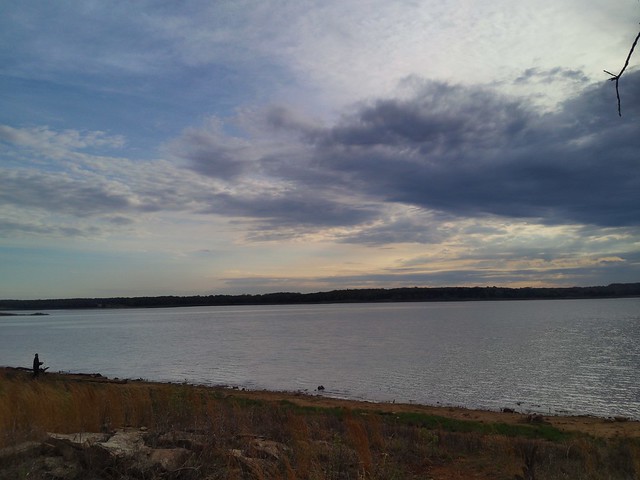 Saturday morning I got up at dark thirty and headed out to western Oklahoma to Lake McMurtry to run the 12K portion of the Lake McMurtry Trail Run. They also had 25K and 50K events. The people who run these trail runs are hard core and they consider the 12K to be kind of like a fun run or something. 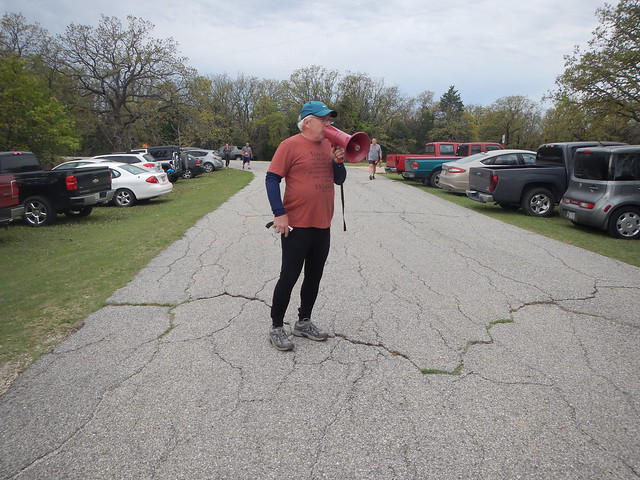 The Race Director, Trail Zombie got us all organized and everything with a few simple directions. Mainly don’t get lost and don’t cheat. TZ as we call him directs several races during the year, leads weekly runs on Turkey Mountain, volunteers a lot and has his own full time business. He is one of the world’s really nice guys.

And here is the start. I started out last place and stayed last place for a long time. 12K is about 7 miles and I finally passed a few at about mile four. I say a few because I think I finished 46th out of 50 or something like that. 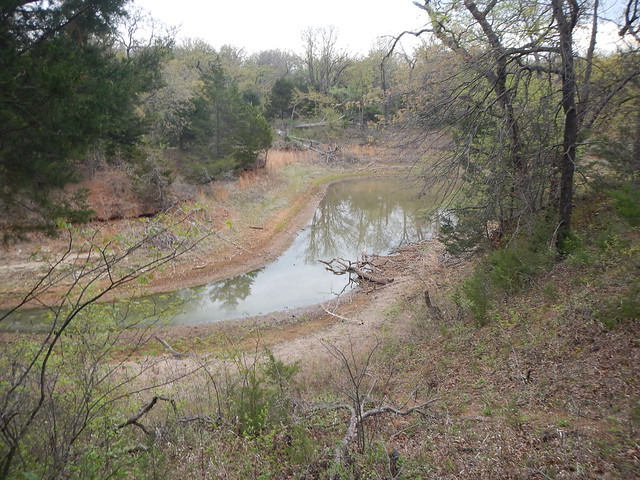 The course was an out and back which means that we run back on the same trail we run out on. Plus the other races used this route as part of the route of their races. This means that people have to be aware of what is going on and let people pass by. I’ve run lots of trail races and I have never seen any conflict on the matter. People just pull off and let others pass and everything is cool. The whole ethic of trail racing is cool and laid back and that is why I like it. Don’t get me wrong, people run the race hard. 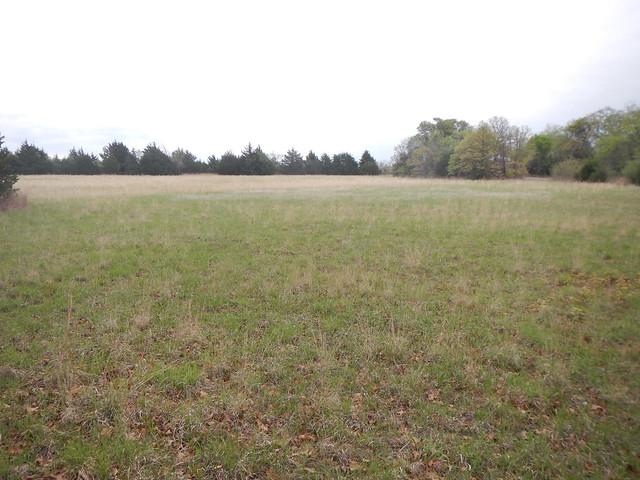 The race was almost entirely in the woods but we broke out into grassland just briefly a couple times. 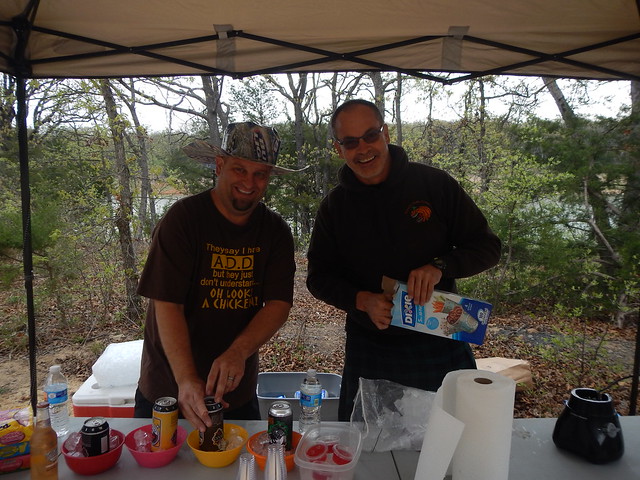 And here is the beer stop. One stop but we hit it twice. How many races do you know provide craft beer at the water stops. I had a Coop Brewing DNR the second time, I forget what it was I had the first stop, but it was good. 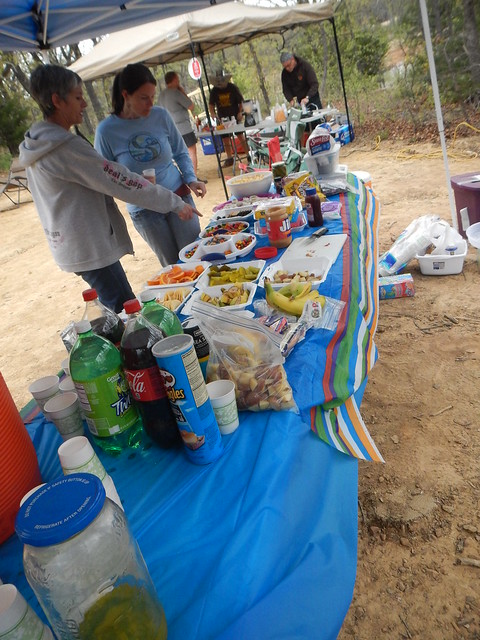 And right close to the beer tent is the regular stuff, water, gatorade, pickle juice (yep, I’ve learned to have a shot of it when I can), baked potato quarters rolled in salt, bananas, cookies, nuts, m&ms. No wonder I can’t lose weight and no wonder I don’t finish any better than what I do.

I actually buckled down and ran the the last few miles to the finish and didn’t take any photographs. My average miles split was 13:30 which is not too impressive but is at least a minute faster than most trail runs I run in so I am pretty happy.

At the finish TZ told me where to find the “Leap of Doom.”  It is a feature of the 25K and 50K races but they don’t let us 12K baby runners on it out of fear for our lives. But, I fortified my courage with a beer and headed out to check it out. 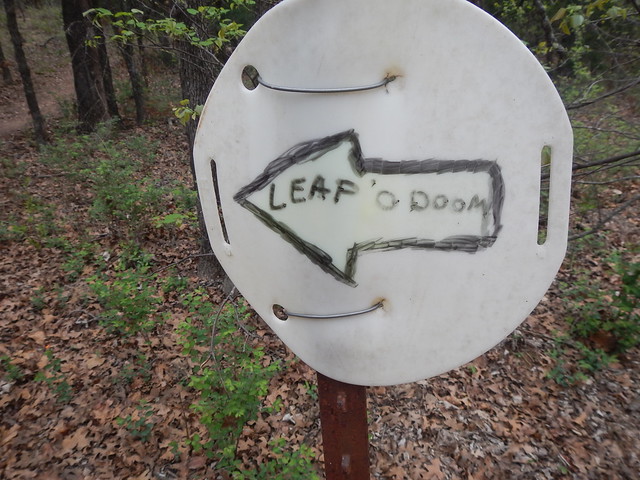 I could tell I was getting close. One thing about TZ is he is good at warning people. I couldn’t turn back even though I wanted to so I ventured on ahead. 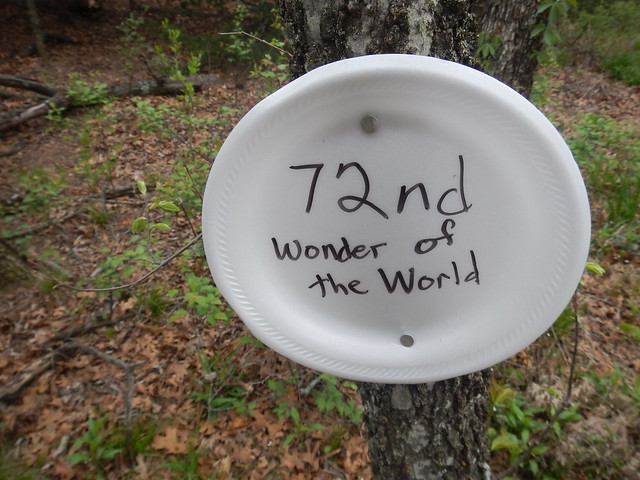 And the warnings kept coming. But I was intrigued, I mean who doesn’t want to see the 72nd wonder of the world. 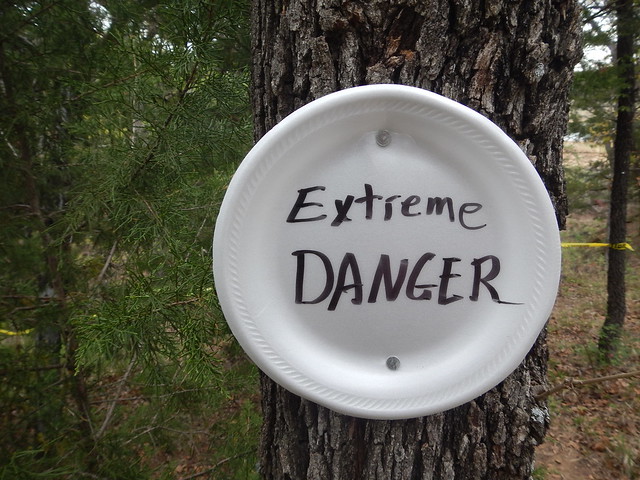 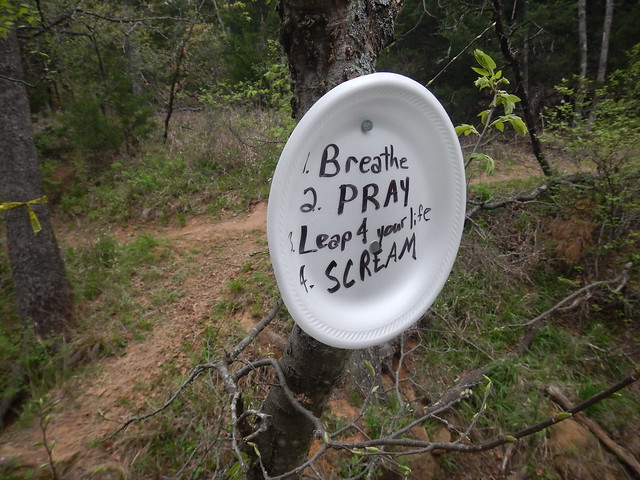 Here are the instructions. I don’t know how to breathe and scream at the same time, do you?

Of course I had to record the event for posterity. This is first attempt.

This is the second attempt. Do you like my shoes? Do you think I should put movie ambitions on hold for a while?

And so I survived the famous Leap of Doom. Well the other thing I needed to do was go find a geocache. 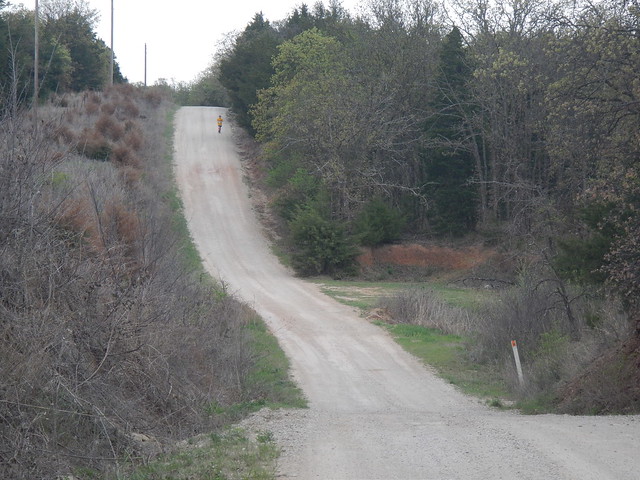 The nearest one was about a kilometer away so I walked to it. Turns out that the location was right on the the trails used in the other races. While I was looking for it several runners stopped and asked if I was okay.

I turned my Garmin watch on for the hike. I get amused at myself when I run on a geocaching hunt cause it shows me going around and around, and I did go around and around. I finally found it though. 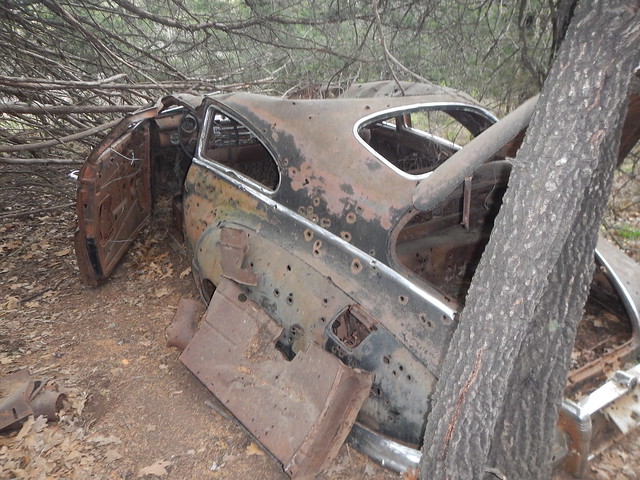 And here is the location. I loved the old car. The amazing car geeks at Car Spotting Tulsa think it is a late 40’s Chevy. I love all the bullet holes. And yes I did find the cache.

So, I was done. Got a lot done over there in Lake McMurtry is what I think, ran a race, jumped the leap of doom a couple times and found a geocache and a neat car.  So I gathered my stinky self up and drove back to Tulsa. On the way I stopped in the little oil field of Yale, Oklahoma and toured Jim Thorpe’s house. Fascinating story about the greatest athlete of all time who lived in a small town in Oklahoma. That will be on the next post.

Thanks for hanging with me all this way!