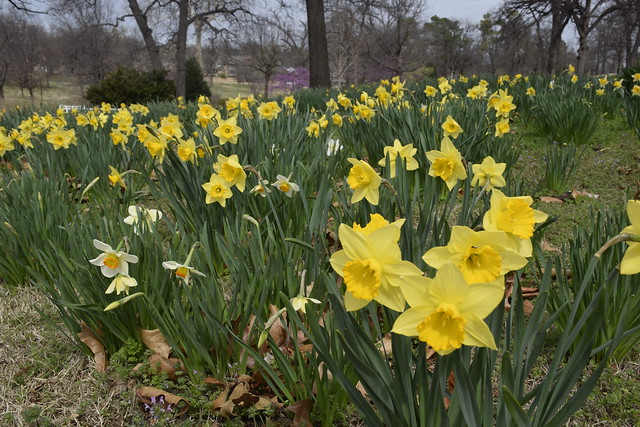 Here is the conventional view

I don’t mind Winter too much here in Oklahoma where it generally is not too severe and given my trailrunning and geocaching hobbies late Fall and Winter is really, really nice because I don’t have to worry about the many vipers we have here and the ticks, chiggers, bees, hornets, spiders, and wasps which have each sent me to the doctor before. Anyways Winter isn’t too bad but Spring is just great. It is great for baseball coming back and wonderful for the flowers especially the daffodils. I just love daffodils. 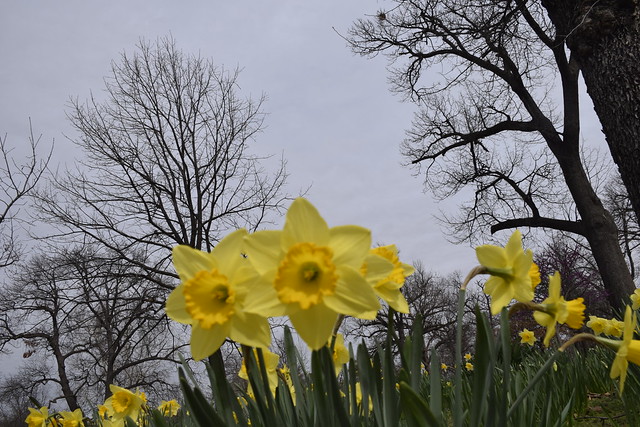 How about we get down to the ground and look up? 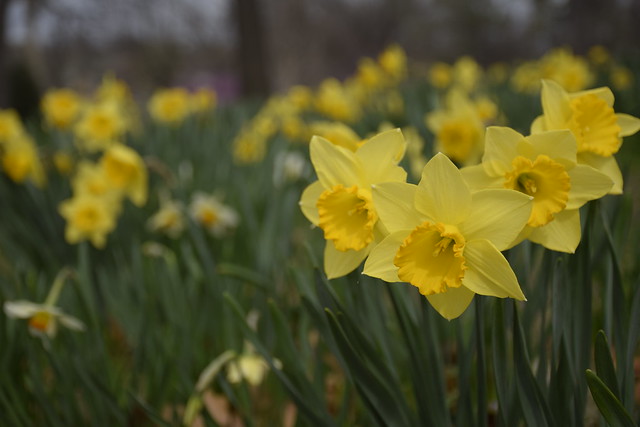 How about zooming up the iso, and reducing the fstop to get narrow depth of focus. I know it is not much but I love this shot.

I went at lunch one day last week and the light was hazy. I thought it made for a nice effect. 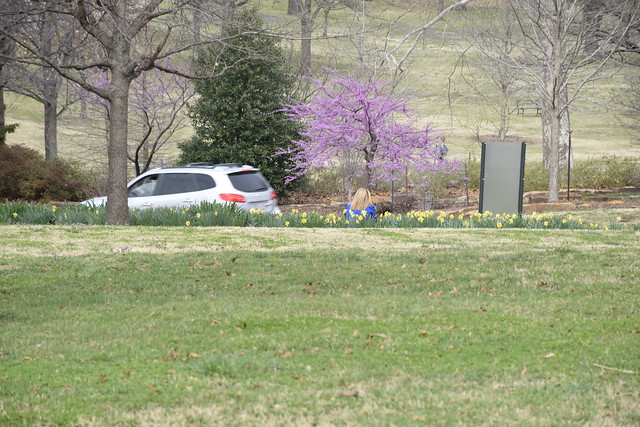 Woodward Park is almost as good as the State Fair for people watching. We Tulsan’s love Woodward Park

I saw this lady get out of her car and she sat in the middle of a daffodil patch and brushed her hair really good and put a blue ribbon in and made a bunch of selfies. I thought it was really sweet. A couple years ago a guy and his girl were there and he set up a tripod low to the ground and he filmed he and his girl rolling around kissing and groping each other in the daffodils. That wasn’t too sweet. 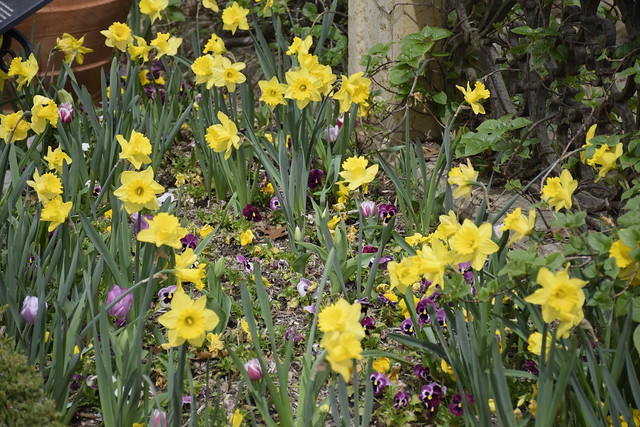 On this past Wednesday during our Spring Break staycation the family indulged me by going to Philbrook Museum to take pics of the daffodils. They seemed kind of sparse there also. Still beautiful. 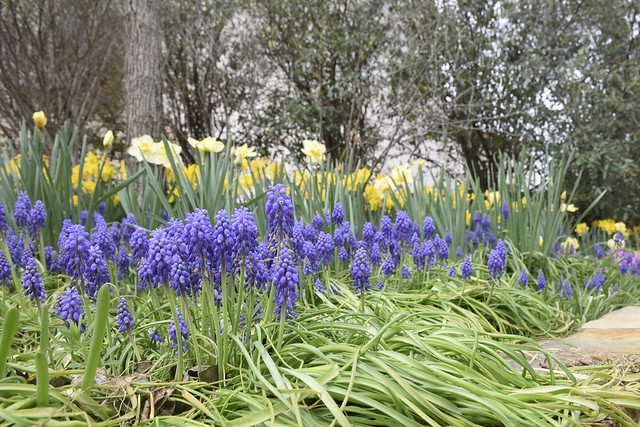 They had some of these very pretty blueish purple flowers also. That’s not the latin name for them, it is the Okie name. 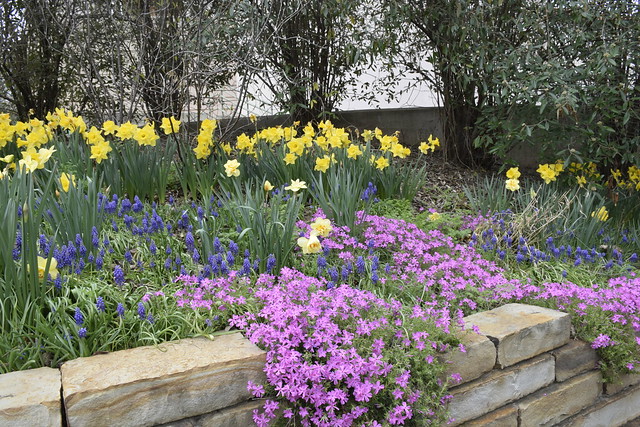 And the purple flowers falling over the ledge is great also. 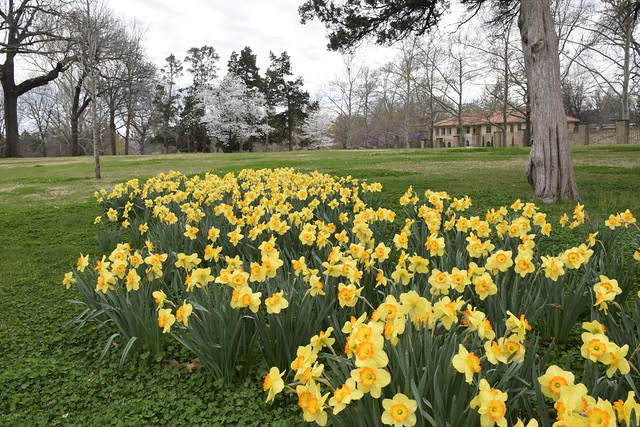 The best daffodils at Philbrook were in the front of the museum. They don’t charge you to look at these. We are members at Philbrook so its all the same to us. I love flowers in abundance. I’m greedy that way. 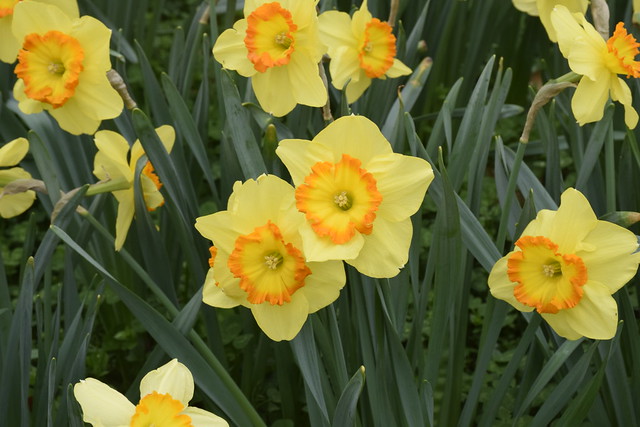 I know I am posting way too many pics of them. I promise not to post any more. I might change my mind though. Can you tell that I am a potential politician? 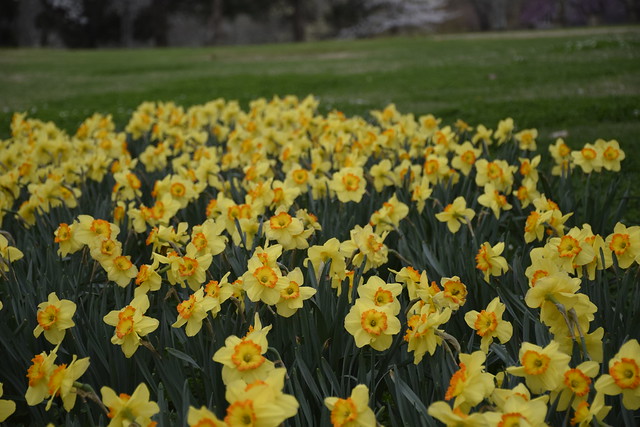 Here I found the abundance I was looking for. I fixed the focus about one third of the way down which left the flowers in the back kind of mushed (that is a very technical photographic term) in an effect that I kind of liked.

So this is my daffodil mania post. No filters, not even any cropping!

So, did I post too many photos? I’m trying to figure out what blogging means in this day of Instagram, twitter, and facebook. I love Instagram and post two or three pics a day with minimal text. Twitter I use mainly during breaking news plus it is a best way to keep abreast of industry news. Facebook is for friends. So I am trying to figure out where blogger fits in. I like getting to know people in blogging and it is kind of hard in Instagram and Twitter. With facebook I already know you. At least I thought I did until you started posting the My Little Pony videos. (hah)

So, how are the flowers where you are?