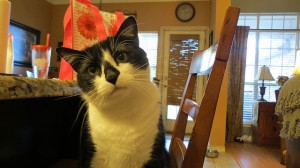 Meet LJ, short for “Logan Junior.” LJ was a Christmas gift to Logan a few years ago. He is a rescue cat but do you think he is grateful at all. No sir!! We are lucky to have him as far as he is concerned. He is one of those bottom heavy cats who doesn’t like to be picked up and when you go to put him down he jumps away leaving you all scratched and clawed.

I guess that we’ll keep him though. He is a handsome devil. The bane of his existance is Chrissy our big Maine Coon. When she gets into a bad mood she just stomps over and lays into him. It is kind of fun to watch.

Sorry, I’m still posting about Christmas. There’s twelve days of Christmas, right. I’m not sure what that means but I’m standing by it. If the Tea Partiers and Democrats can stand by their beliefs without understanding them so can I! This is America by goodness! 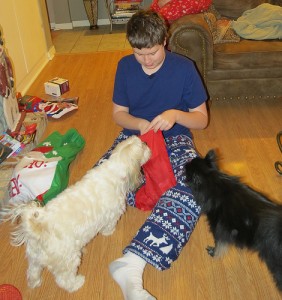 We are shameless about our animals. Yesterday, Nana brought over her two dogs, Fiona, and Reba, and with those to and our three plus our two cats, the critters outnumbered the people seven to four. 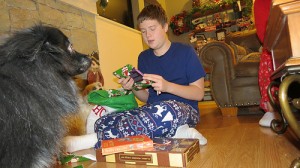 Yep, we buy them presents and give them stockings and such. We give them treats but only sparingly. If you think kids get fussy and sick with too many treats, dogs are worse. 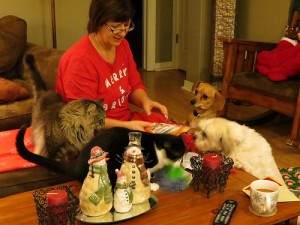 Sweetie is the pet magnet. Here she is attended by four.

Do you celebrate Christmas with your critters?

And kudos to all the people who worked so that many of us could have a warm and safe Christmas. Tulsa dodged a bullet on snow but our city trucks were out spreading sand and salt, the Highway Patrolmen (and Patrolwomen) were out and about. We don’t take you men and women for granted. 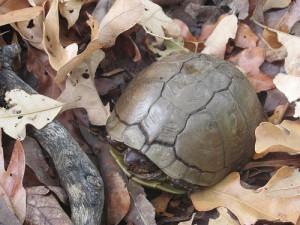 Some critters are already getting ready for Winter.

Wednesday Night I cashed in my weekly kitchen pass for a trail running and geocaching expedition on Tulsa’s Turkey Mountain. 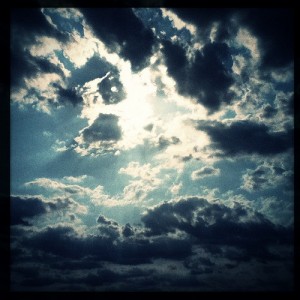 I headed down the Blue Trail and then another fainter trail to the Oklahoma Rock. 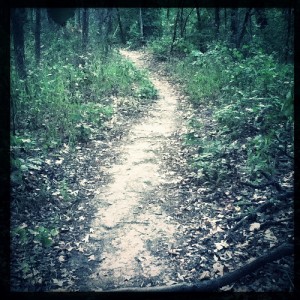 The cache is also named Oklahoma Rock but it is not at the rock. It is 207 feet from the rock in the direction that the rock is pointed. The Oklahoma Rock cache was placed by M5, otorious for ingenious fun hides. This cache has a twist because he placed a smaller version of the Oklahoma Rock near the cache, pointing back to the big Oklahoma Rock. Sounds easy right? 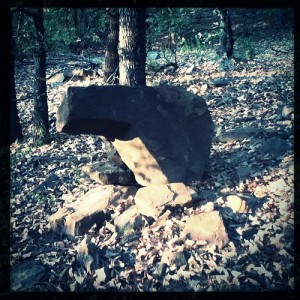 So off I went. I’m not going to spoil the fun for you by showing you what the cache looks like, what the smaller rock looks like, or  talk about the problems I had in finding the cache. You need to figure that out for yourself. 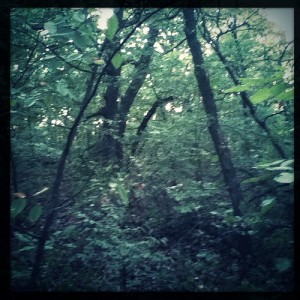 I found it though. Finally, this was my third attempt. It hadn’t been found since June.

I was so pumped I went to look for another cache further into the mountain named “What are these doing here…:: A cache hidden in or near a bunch of old Pepsi Delivery Truck’s parked at what is called Pepsi Lake near the Westside Y. Don’t ask me what they are doing there. Don’t ask me where the cache is either because I couldn’t find it.

First I got stopped by a baby possum. 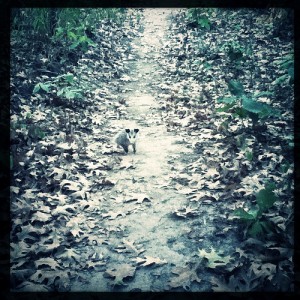 Standing in the middle of the trail. He must be an NRA member because he was standing his ground. 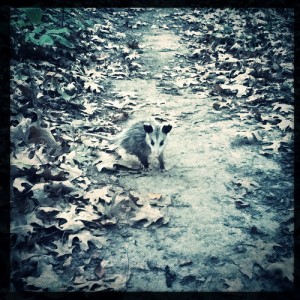 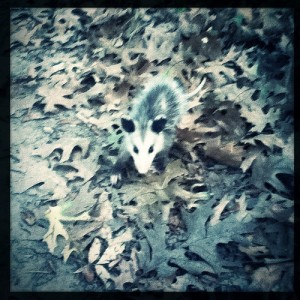 Not very cute and cuddly though. I don’t think he was packing but I went around him. Don’t mess with critters hogging the trail is my motto. Usually refers to snakes but I’m adding possums to the list also. 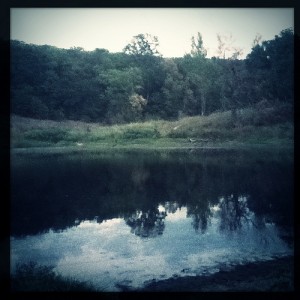 I got to the Lake and actually climbed into the trucks, and looked high and low. “What are these doing here…” was hidden by adairmd. Another cacher who knows how to frustrate people. We cachers like the tough hides. The fun is in the looking. This cache was found by blogging and trailrunning friend Trail Zombie. I can’t let him get one up on me. 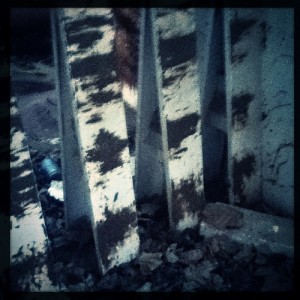 It was getting dark and I didn’t bring gloves or anything protective to search through the vehicles. I’ve already been to the doctor several times to get treated for various insect bites and I get tired of the staff laughing at me and giving me that look that they give to addled old fat guys. I’ll be back though.

Thank you again my fellow Americans. You have spent billions of dollars putting satellites into orbit so that I can climb through rusty truck bodies looking for a box. That is quite a sacrifice on your part. Especially seeing how I didn’t find it.