Tulsa is unique for having thriving downtown churches unlike many big cities where they are just barely hanging on. Here are three of them and a bonus photo.

This is one of my favorite churches, the Catholic Holy Family Cathedral with its unusual three spires. This year it is 105 years old.

Right down the street is the First Christian Church of Tulsa with its unusual tiled roof. It looks a little Middle Eastern to me.

And my favorite, the Boston Avenue United Methodist Church on the very southern end of downtown. An zig zag art-deco masterpiece designed by Bruce Goff and Adah Robinson. It was barely finished when the Depression hit and church legend has it that the leading members had to work like crazy to keep it from being foreclosed and turned into a movie theater.

This is the bonus photo. It is not of a church. It is the underside of the 21st street bridge over the Arkansas River in Tulsa. I caught it in the afternoon late enough to be lighted by the sun to the northwest (to the right roughly) and early enough where the light had some intensity to it. And I helped along a little with a Topaz Studio filter. It kind of looks like the inside of cathedral doesn’t it? Oh throw me a bone somebody!

There are several other very active vital churches downtown with interesting buildings. I’ll be posting about those later, maybe. I don’t plan my posts much.

I am linking with Our World Tuesday. Come join in!! 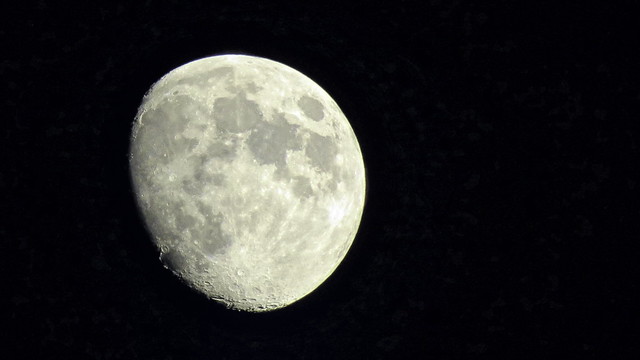 The sky was clear and the moon was bright so I took a photo of it. Don’t forget this Friday we have a full blood moon coming up. This was about 86% gibbous phase. I don’t always get them but I love it when I can see the craters on the “bottom” of the moon. 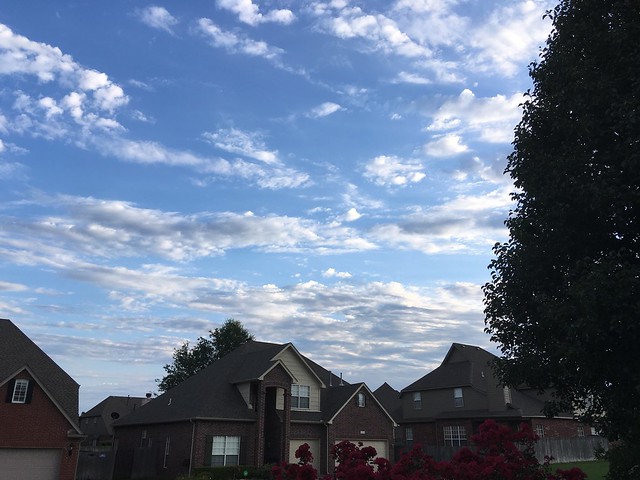 And here we are in the ‘hood. I loved the clouds one day when I was on the front porch. I guess sometimes I am a lazy skywatcher. While we are in a sharing mood, I took the photo of the moon from my front yard as well. Do you have any true confessions you want to share? 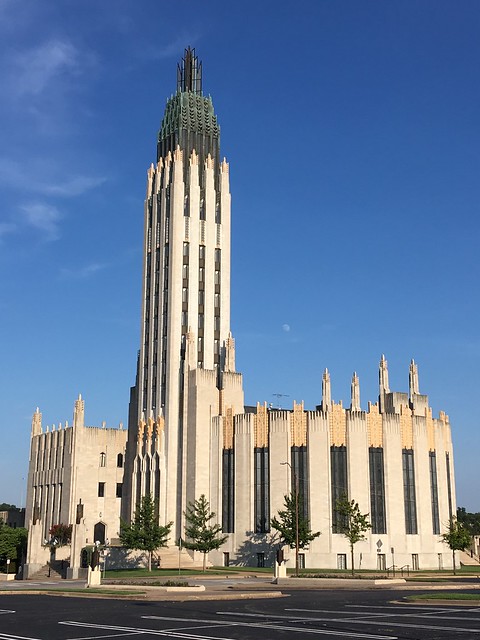 And this is my favorite building in Tulsa. The Boston Avenue United Methodist Church. An art deco masterpiece built in the late 1920’s and designed by Bruce Goff and Adah Robinson. The interior is beautiful also. It was our family church when we first moved to Tulsa. 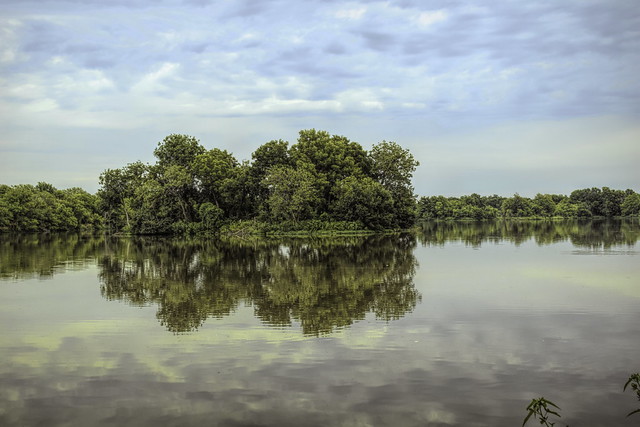 And this is from Oxley Nature Center. I love how the island appears to be suspended in air. (Okay maybe I’m stretching it a little bit.)

Okay, that’s it for this week. Don’t forget the full moon on Friday. Take some photos for me. I’m going to be at a baseball game so I am depending on you. 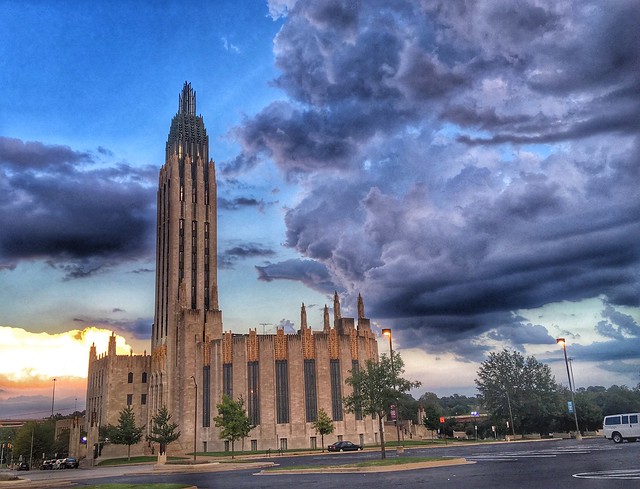 Monday night I was working out at my gym downtown and when I left to go home I captured this scene. I took a bunc of shots of it and spent some time “messing” with them with various filters. The above uses good old Snapseed, the free and very powerful and easy to use app from Google. The building is the Boston Avenue Methodist Church in downtown Tulsa. Designed by Bruce Goff and built in the late 1920’s. It used to be our home church and I will tell you that it is even more beautiful on the inside than the outside. 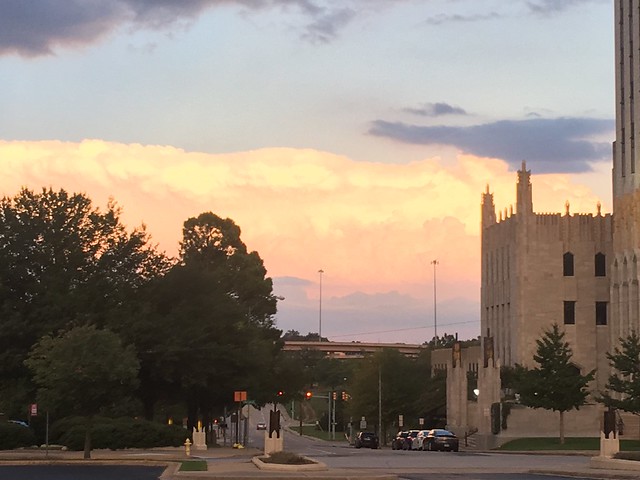 What I started out taking pictures of was the pink clouds. It was spectacular. 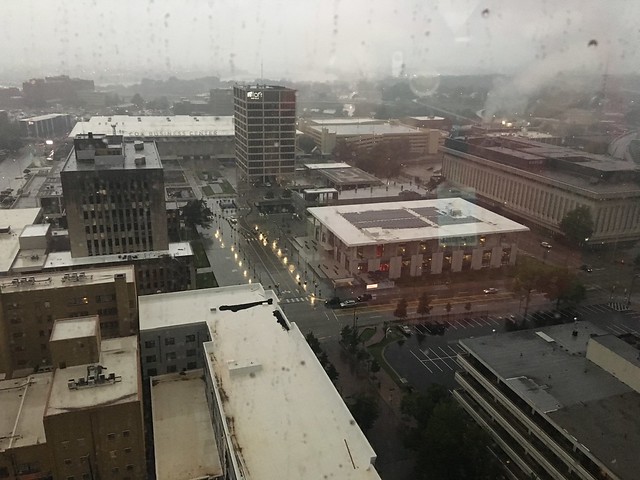 And this is from last week from my office looking toward our Library. We got soaked all day. 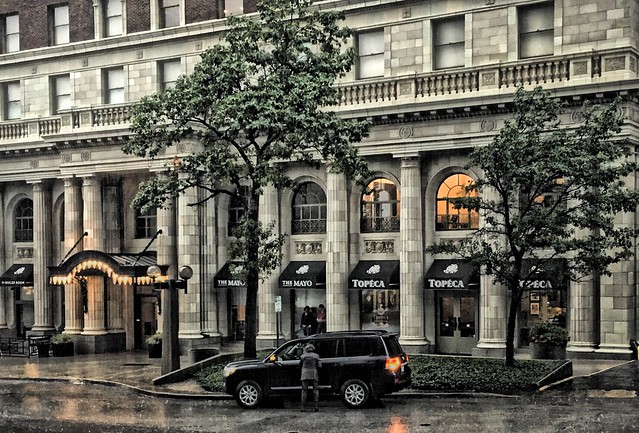 I took this homey pic of a scene across from my office building. I loved the glow of the lights and the reflections. And I really ramped up the HDR on this.  I love using filters. I find that I don’t have the time to edit photos with my editing software any more.

We are having a couple cool days now but it is going to be back to the 80’s the day after tomorrow. What is the deal!! 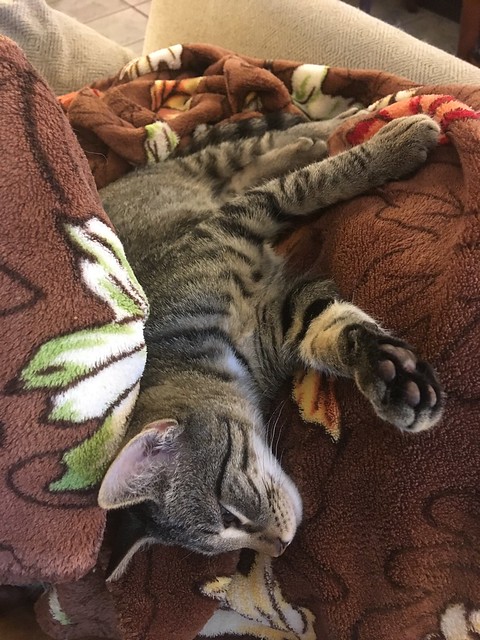 And how about a kitten picture. This is Lizzie. She has taken over the house and is about as cute as cute can get. 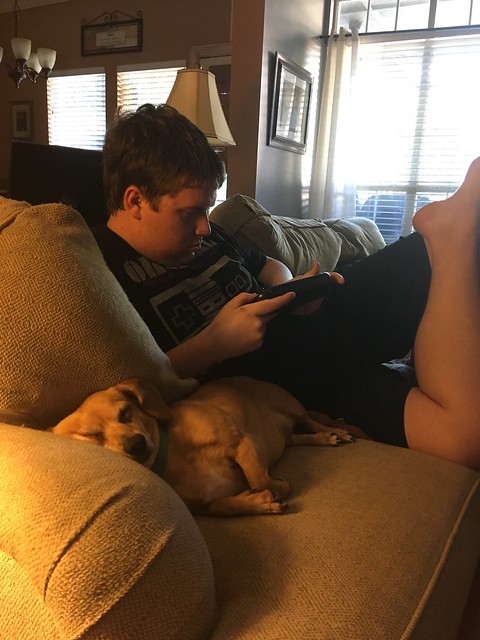 This is Ginger and Logan. They are not so cute any more.