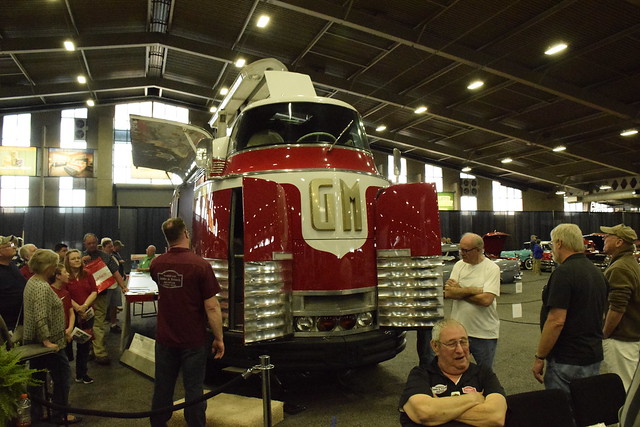 Something new came to Tulsa the other day. Or more accurately something old came to Tulsa looking like nothing I had ever seen. GM Futurliner Number 10 made a round downtown and then headed to the 2018 Tulsa Car Show where it was the main attraction. I had never heard of them but apparently they were popular in the day. General Motors made twelve Futurliners for the World’s Fair in 1939 and afterwards sent them across the country along with 32 support vehicles putting on a show at each stop called “Parade of Progress” trumpeting modern science and technology. Each vehicle was self contained with stage and lights and had their own segment of the exhibition. Number 10 was originally devoted to “Opportunity for Youth.” 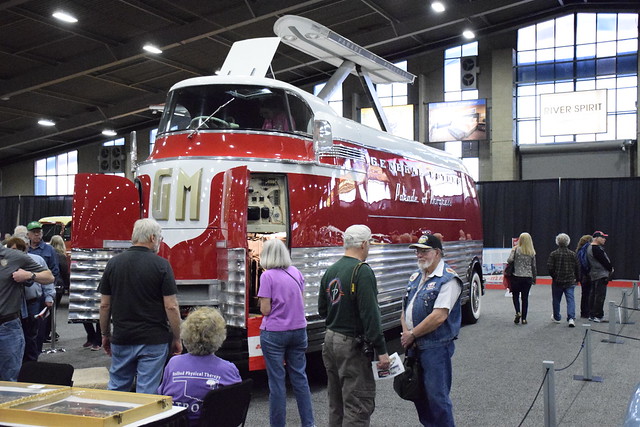 Another view. Up top you can see the built in floodlights to illuminate the stage.

The show was very popular but was halted during World War II and then started up again after the war and ended in 1955. A victim of a technology called television.

These things are huge, 11’6″ tall and 30 feet long and a wheelbase of 8 feet. They weigh 30,000 pounds. They were powered originally by a four cylinder engine and then later a six cylinder that had only 145 hp. The top speed was 50 mph. Number 10 is owned by the National Auto and Truck Museum in Auburn, Indiana. A representative of the museum said that it can be driven around town but for moves from town to town they load it up on a trailer. 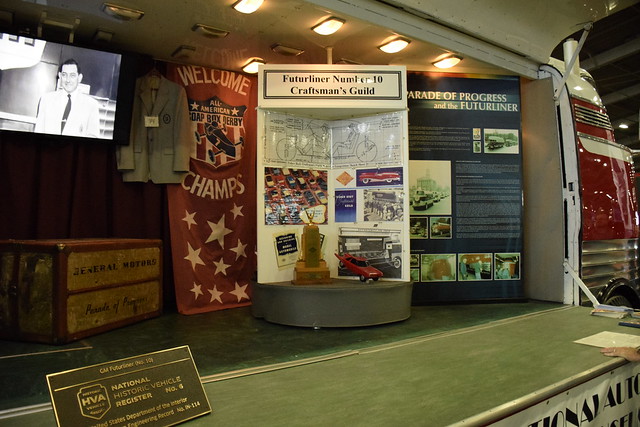 Here is the stage on the right hand side.

The design of the vehicle is beautiful, streamline art deco with shiny panels and bright red and a white top. I love the tires. Big old fat white walls. The hub cap had an atomic symbol on it. It sure recalls a bygone age of unbridled optimism in the future.  The vehicle is Art Deco on Steroids and is just so beautiful. 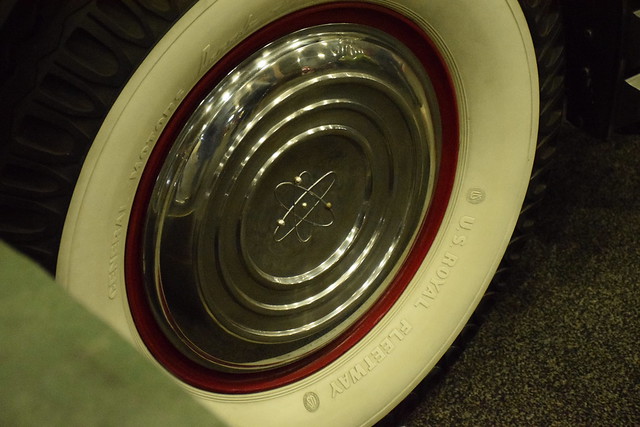 Big fat white walls and the cool hubcap with the atomic symbol on it.

The Futurliners have a Tulsa connection. Oral Roberts, Tulsa’s own prosperity gospel preacher bought one and renamed it the “Cathedral Cruiser” and used it to barnstorm the United States, Mexico and South America. 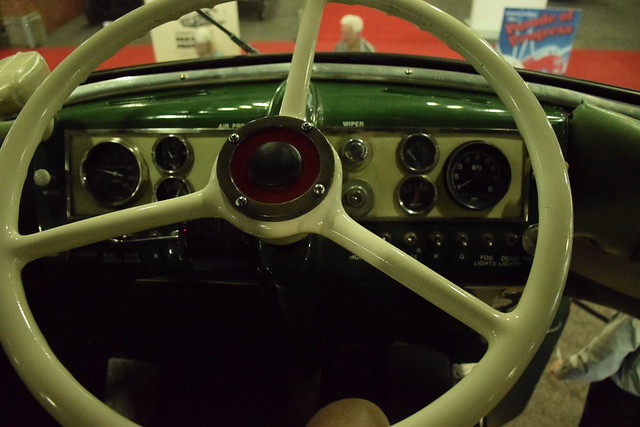 Sitting in the driver’s seat. I don’t think it had power steering.

Of the twelve original Futurliners only about eight or nine still exist and of those only a few have been restored like this one. 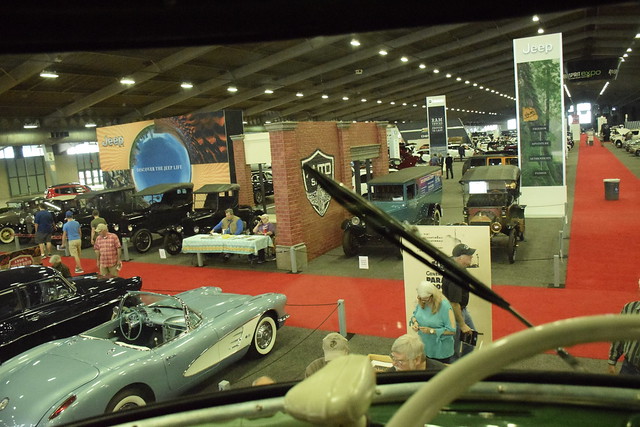 What a view from the driver’s seat. I think it would be scary as heck to drive. You would never be wondering what it is happening up ahead.

I had never heard of Futurliners until I saw something posted online about this one parked downtown Thursday afternoon. I could have kicked myself because it was parked right across the street from where I work and I didn’t see it. I got a good look today at the car show and even got to sit in the drivers seat for a minute or so. 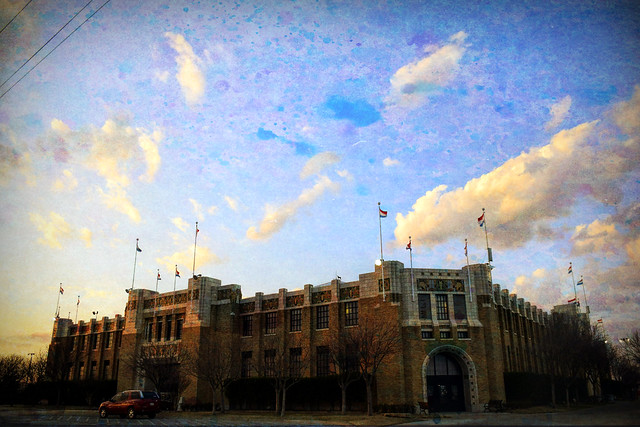 The Oklahoma sky over the art deco styled Pavillion in Tulsa. 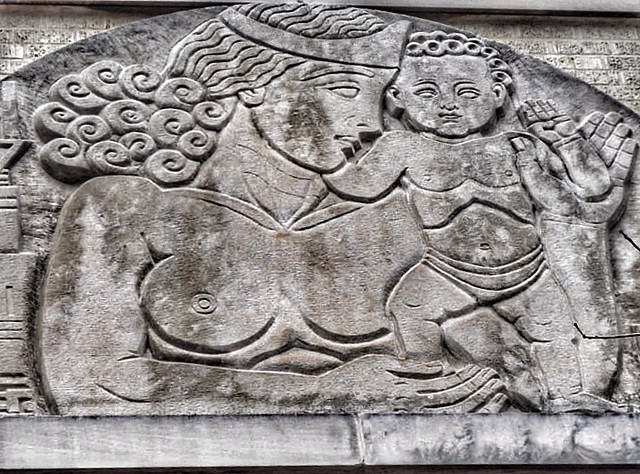 Lunchtime Monday was cold but I grabbed my camera and went walking for just a few minutes. I got to what I call the “Old Chamber of Commerce Building” and took a photo of some of the Bas Relief sculptures on the facade. They are in kind of an art deco style and there lots of images in the panel.  The one above of a mother and child is my favorite.

Right next to it is a depiction of Tulsa’s role as the “Oil Capital of the World” way back int eh day. It’s got and oil well obviously as well as refineries, pipelines, tank farms, trucks, railroads, and airplanes. 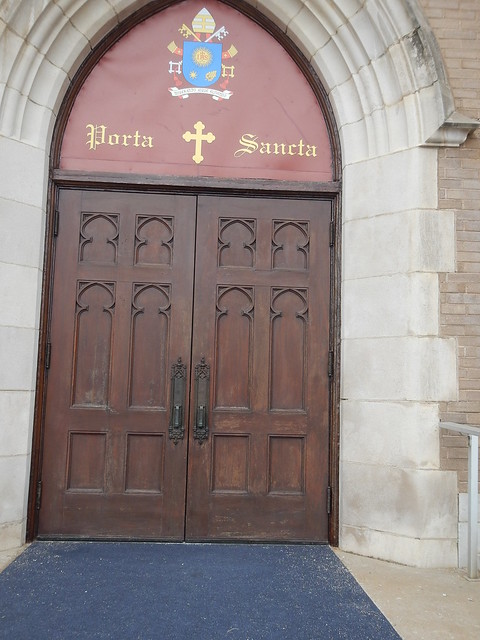 I went walking around the corner over to Holy Family Cathedral and saw this door labelled Porta Sancta. Of course, not being Catholic, I had to google it and it has to do with Pope Francis declaring a Jubilee Year of Mercy where believers are to learn about and practice mercy in the daily lives. The Porta Sancta has to do where a believer who meets certain requirements can  receive an indulgence where an “..indulgence is a remission before God of the temporal punishment due to sins whose guilt has already been forgiven…” It all starts by going through the door which is open at certain times. The church’s web site describes it.

I don’t really understand it but you know, we could all use a little a mercy in our lives right  and we could all practice a lot more mercy also toward others. (And by the way if I’ve got any of this wrong, please let me know!)

And then it was time to get back to work.

What did you do today?