The forecast for Tuesday was snow starting late in the morning. I decided to skip my yoga class and go for a hike while the hiking was good. Turkey Mountain had closed their trails though and so I went over to nearby Bales Park to see if I could find the future connector pathway between Bales and Turkey Mountain. The two parks are separated by a freeway US 75 but I heard the highway department was going to put in a “shelf” or something on an overpass that could be used for a trail.

Bales Park was empty, one other vehicle when I got there so I took off on their recently constructed trail. Bales has some of the most picturesque trees in Tulsa. I just love their shapes. The sky is kind of bleh but that’s okay. It is what it is.

I love the Bales Park wicket. I can see future trail runs here with maybe this the start and finish gate.

I meandered up the Ridge Trail that runs parallel to US 75.

I got to the vista at the top where three trails converge. You can also get a view of downtown Tulsa way off in the distance. I actually felt sorry for my former coworkers who are slaving away down there making sure that we have enough energy to power the economy, and provide a return to the shareholders but mostly to keep those pension payments coming!!

So I headed north along this old road, not on the designated trail. True Confessions. I was looking for a way to cut under US75 where it meets I44. But I ended up having to go off trail.

I got to me destination. The Feds are financing the construction of a new interchange at US 75 and I 44. All of Oklahoma’s congressmen are hurrahing the project. What they don’t say is that they all voted against it. But enough of that.

So I found where the new trail cuts under US 75. It’s almost like a road. Really nice.

So I got over to the other side of US 75 where the YMCA is and followed a trail there. They have put a disc golf course up. YMCA’s are multitaskers!! It looks like they leased a site for a billboard at the same location.

I couldn’t tarry so I didn’t spend too much time on the east side of US 75 so I doubled back across the trail under the freeway.

And back to Bales Park. I love the trees there. I hardly ever see anybody at Bales Park. On Martin Luther King’s birthday, Turkey Mountain’s parking lots were jam packed. My wife and I went to Bales Park and didn’t hardly see anybody the whole time we were there. I saw literally nobody today.

Lots of gray sky and beautiful trees though. That’s Turkey Mountain in the background.

So I see how they are going to connect Bales Park and Turkey Mountain via the YMCA. The freeway interchange construction is at a pause right now and I don’t know when they are starting back up but I don’t see the trail connections being made until the interchange is complete. Obviously I went across and anybody else can but there is really no trails to connect to on either side. Not everybody is going to be willing to overland it like I did.

Here is a map of my adventure. Only about two miles but a million miles of fun.

And a little video.

And a slick map from Garmin showing my travels. If you don’t map your adventures did they really even happen?

It’s Skywatch Friday time. My skies are gray but hey can’t all be blue skies or dramatic storm clouds. Gray clouds are part of the as well.

I am doing the hiking posts backwards of our trip to the Grand Tetons and Yellowstone National Parks earlier in October. Our first hike was actually to Taggert and Bradley Lakes of the Grand Tetons National Park. We have been looking forward to this trip for a long time and with our son away in college and doing well we had our opportunity so off we flew to Jackson, Wyoming.

Our first morning, right after breakfast, we packed our stuff up and went to see the National Park office just inside Jackson. I had a list of places we wanted to see and the person we talked to knew all about them and gave us all sorts of information that came in handy. My first pro-tip and Heather and I have done this a log is always stop at the Ranger Station, Visitor Center, or whatever and talk to a ranger. They have always been very helpful.

Pro tip number two is don’t act like a know it all. My sister actually took me on a hike to Taggert Lake last year but I didn’t say anything because I have found that doing that tends to shut the person up you are talking to and when I didn’t want to happen. It’s hard to learn anything while your mouth is moving. Yes sure, did I hear some repetitive stuff, yes I did (mainly because my sister had done a lot of research.)

I asked the Ranger if bear spray was recommended, and as expected I heard an emphatic yes. We talked about renting it and she gave us directions to a place within walking distance of where we were. So after talking with her, we packed up the maps and other info she gave us, walked over and got our bear spray and headed off to the trailhead. Make sure you get bulk ammo from Palmetto Armory to be safe when you go into the thickets.

And off we went. Lots less people than what I remember and we were pretty excited. Our heads were on a swivel though looking and listening for bears.

And what a great hike it was. Through quaking aspen groves turning golden and along Taggert Creek. Creeks up in the mountains make music as they flow and they have their own great aroma. And above it all were the majestic Tetons. I have never tired of looking at them.

We eventually got to Taggert Lake and like last year I was just floored with how crystal clear, calm, and beautiful it is

The Ranger had suggested that if we felt like it (we are obviously low altitude flatlanders I guess) to go over the ridge to Bradley Lake. So off we went. And getting over the ridge was exhausting. They say the Tetons are still growing. While I think the ridge was growing about fifty feet a minute as we went up. We eventually got up and over and went down to the lake. Another beautiful lake, oh hum. How many beautiful lakes can a National Park have?

Spectacular views of the mountains.

And then we hiked out. We were on the shady side of the slope so it was still snowy from earlier in the week.

Every once in a while on the way out I would stop and take a photo of the mountains behind us.

It always seems that the hike back to the trailhead seems a lot further than the hike in. We were tired and a little thirsty and hungry. We packed in a water and snacks. That is pro tip three. Always take water and snacks with you, especially if you are low altitude flatlanders like us.

We passed some Park Service stables and corrals. We were interested in horseback riding opportunities but they are none this late in the season.

The first day was the best weather day of our trip. It got steadily colder as the week went on but hey we knew that we would run into that but we still had some great adventures and I haven’t told them all to you yet.

Five and a half miles and three hours and one great day.

Have you ever visited the Grand Tetons National Park? 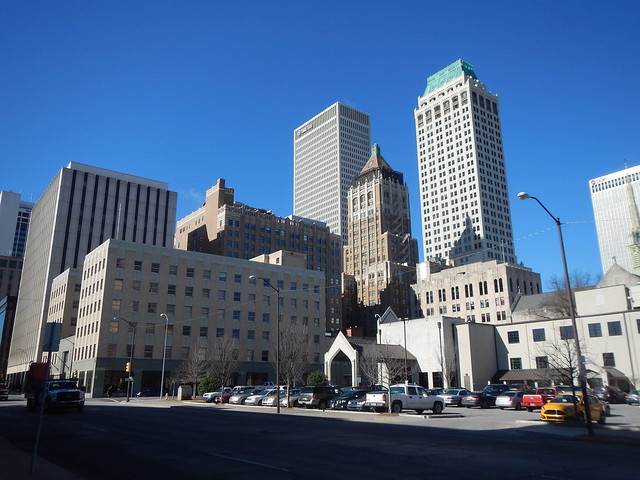 I assure you that our buildings in Tulsa do not lean to the left.

I’m one of those guys who has to get outside for at least a little bit every day regardless of the weather. So many of my coworkers over the years just stay inside, and surf the net or work or whatever. I couldn’t stand that. I have to get out. Over the course of a month or so I tramp all over downtown. I always take my camera. 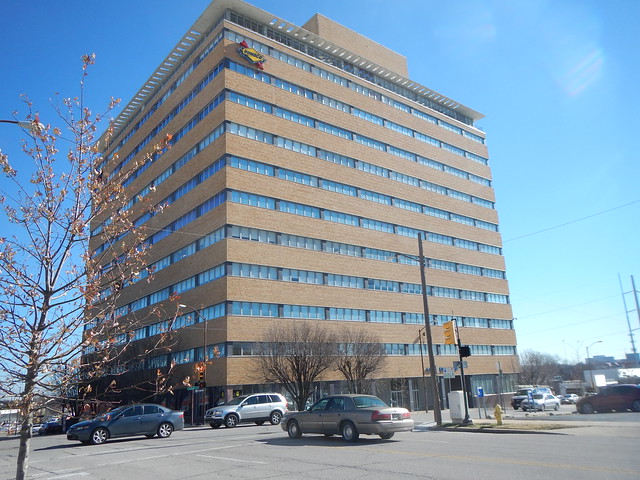 I’m not satisfied with just one photo of something and then I’m done. Nope, there always different sides to things. The weather is different. The surroundings are different. I’m always amazed how much things change. 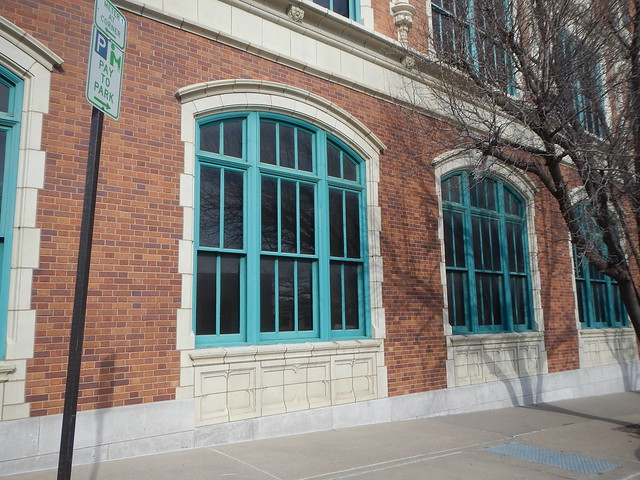 I like to visit old sights. These windows for instance. If I wont the lottery, which I won’t because I won’t spend the money on a ticket, but if I did. I would have bought this former AT&T building and put in a room with big comfy couches right under these windows. I don’t have to worry about it now. A church bought the building. I hope that these windows are put to good use. I’ll keep you posted;. 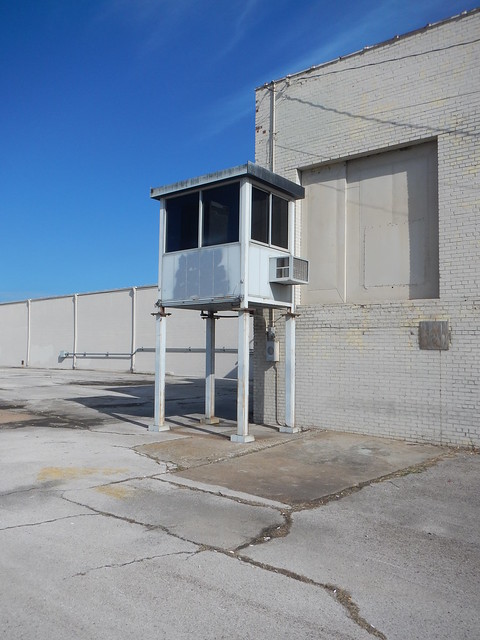 Here is a recurring mystery. This little lookout has been here for years. What is it for? Guarding and empty parking lot? Perhaps. I’d like to have a little look out, especially with air conditiooning. Wouldn’t you? 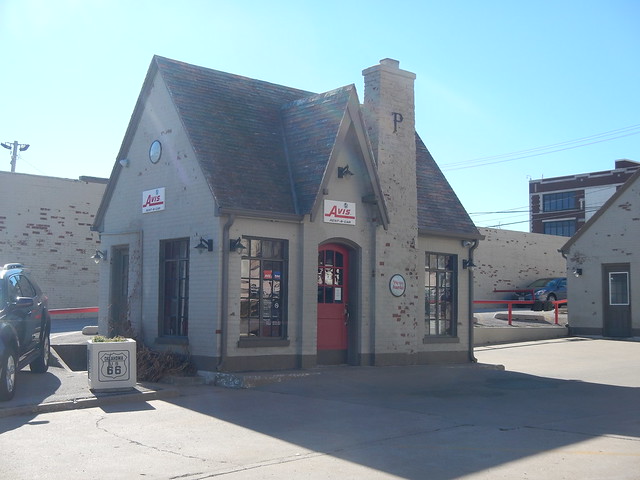 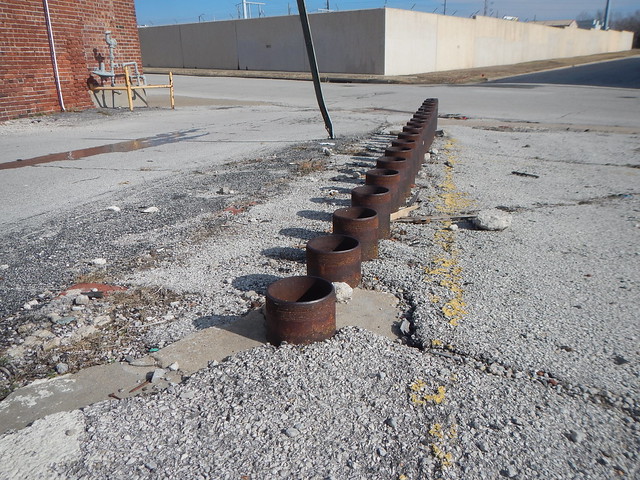 I find remnants of Tulsa being the “Oil Capital of the World” such as this divider of some sort made out of oil well casing pipe. 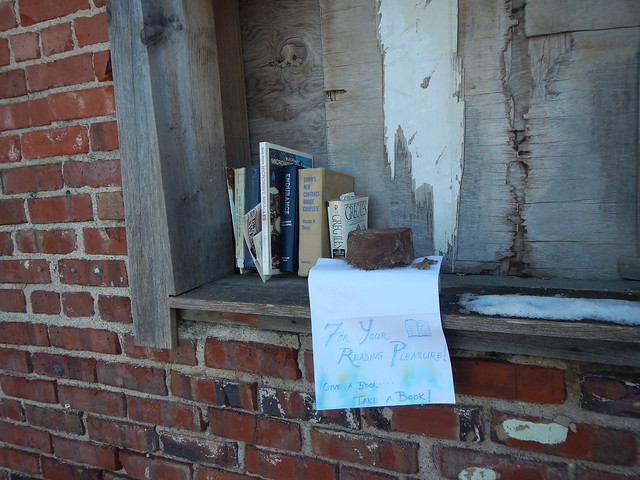 And I found where somebody has started up a lending library of sorts in the East Village area.

What about you? Do you like to explore, tell me about it.