The other day I went and dropped off the kid to start his shift at Lowes. I was all set to go back home and get ready for a stand up paddleboard yoga class I take every now and then but the weather was cool, sunny and nice, and the covid is raging here in little old 60% unvaccinated Oklahoma so I decided to go for a hike on Turkey Mountain rather than go inside.

So I took off. I took the blue trail on top of the mountain on the outbound, north route, and came back on the lower yellow trail which has great views of the Arkansas River and south Tulsa. It faces east and the sun was still pretty low and I thought…

Wow, there are lots of places to do yoga here. I was thinking in particular of sun salutations which is a good dynamic limbering up pose.

Put them rocks to use for something besides falling off of and tripping over.

This looked to me like a tree doing the tree pose on a rock.

You got two rocks here, for romantic yoga folks.

This is more my style. A rock I can just walk up on and something where I can reach out and steady myself. I do a lot of steadying myself when I do yoga. Of course many people don’t recognize what I do as yoga.

Here is a place for a whole family. An old oil pumpjack base. With my favorite directional sign. Just follow the arrows if you are lost. My advice is to not get lost.

Here is a video of my route.

Come join the fun at Shadow Shot Sunday 2 with the Magical Mystery Teacher.

I hope everybody is recovered from the Fourth of July celebrations. Those of us who celebrate it anyway. It was low key for us. I put our flag up early. We grilled burgers at our house and took dinner over to the world’s great MIL’s house. We ate and visited and then went swimming. Had a pretty good time. We left just as her neighbor’s were working up their celebration. Remember the video we saw during the first gulf war when the US was attacking Baghdad and everybody in that town was shooting up in the air. That’s kind of what it was like.

We got home to much less of a ruckus. Tulsa doesn’t allow home fireworks, although it seems unenforced but it does tamp it down compared to Broken Arrow, where MIL lives where you can do what you want. I got home in time to launch the drone. I was going to be cute and say come back Thursday to see what I got but I’m giving it to you now.

Pretty decent sunset. So now the pressure is on I have to come up something decent for Skywatch Friday. So if you are a wise ass, you would tell me that I have never had anything decent before, why worry about it now. But I know you are not that kind of person. I am!! But you are not, I have faith in you. Don’t let me down.

So next morning I go on a bike ride. That’s what this whole post started out being about but I got sidetracked. I’m blaming you. Just fess up so we can move on cuz I am not taking the blame. I’ve told you before I’m in training to be a politician.

It was a nice day. Warm and dry for a change. Out west they are having hot and humid. Something is up. You and I both know what it is and it doesn’t involve cow farts. Anyway with all the rain we are having the Arkansas River is way up.

I rode the RiverParks trails up to the Neon Sign Park off southwest Boulevard. These are facsimile signs from actual businesses that used to operate on Route 66. This is where I remind you that I am 66 this year and so Route 66 is a big deal to me this year. And probably next year because I don’t know if a route 67 exists and even if it does it is probably too far to drive to get photographs. 67 is a prime number though and I just love prime numbers.

Across the River is Cyrus Avery Plaza. Avery is the guy who invented the concept of a cross country route from Chicago to Los Angeles. I love the plaza but the homeless folks drive me batty. They are not threatening just annoying. To be fair though if I was starving and had no place to live I would be more annoying than they are.

So all told about 14 miles which is just a warmup for most riders I know. You know it took me an hour and a half and that is about all I’m going to do. I had a good time though.

Went to the gym and showered put clean clothes on ( I love using the gym’s hot water and towels, especially for non-gym exercising) and got home just in time for Lizzy the yoga cat’s finishing up her Shavasana pose. She’s great at yoga, especially the cat and cow poses. She refuses to do up or down dog though.

Hey you want a hoot. We have two idiot dogs and I put on some dog youtube videos. Abby loves them. Barks her head off.

That’s it for now folks. I’m linking with Our World Tuesday 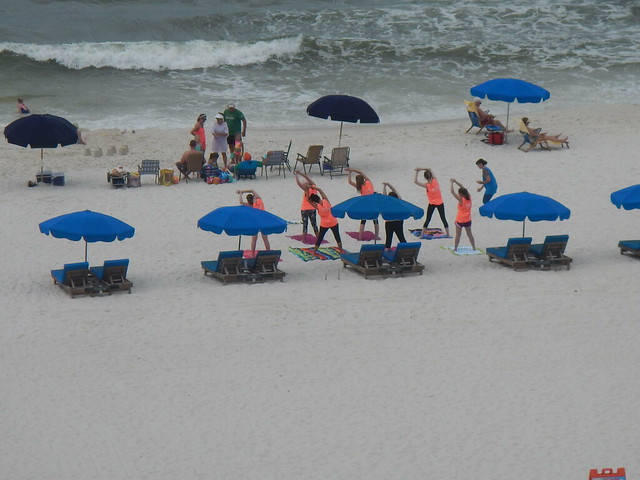 Our first full day on the beach. Yoga!!! we didn’t join, we didn’t have the tops for it. 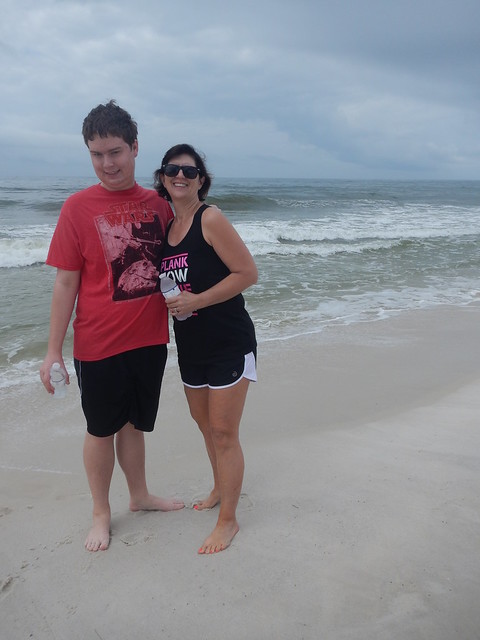 We went on a family walk. We are going to celebrate his 19th while on this trip.  He is a regular beach bum. We used to go to South Padre Island for our vacations. Lots of Hispanic people would be there with their music on boom boxes. He’d really shake his diapered booty to rhythm, the young girls really loved dancing with him. He doesn’t really like reminiscing about stuff like that. 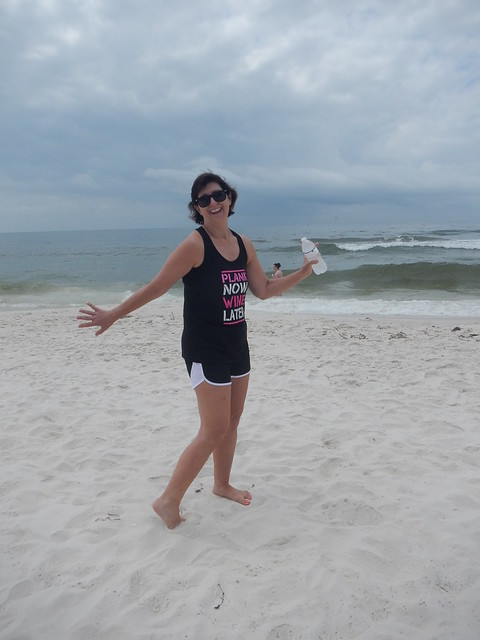 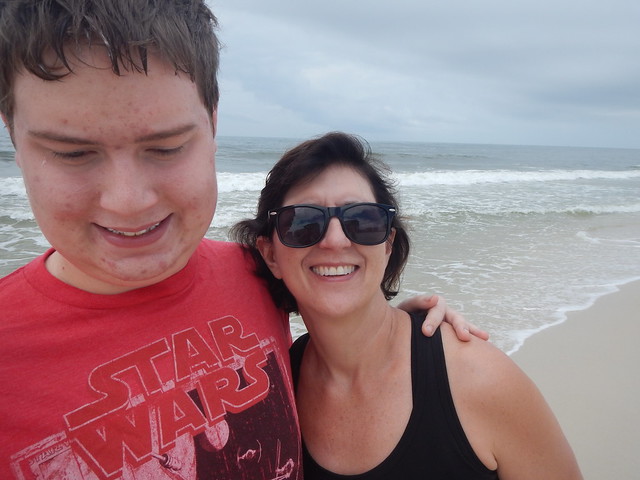 He’ll aways be our baby boy, even though he towers over both of us. 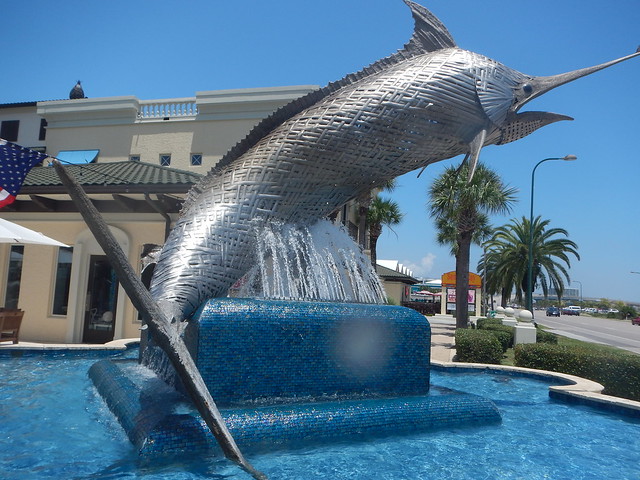 Heather needed another bathing suit so we first we tried a beach place, and then this high end place with this fish fountain. 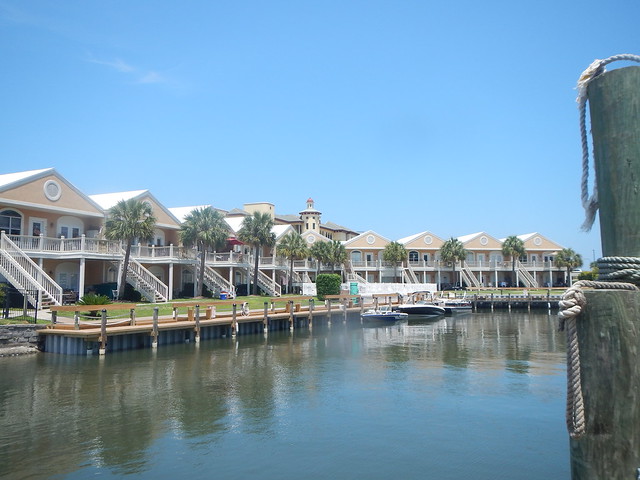 And some nice condos right on the water. 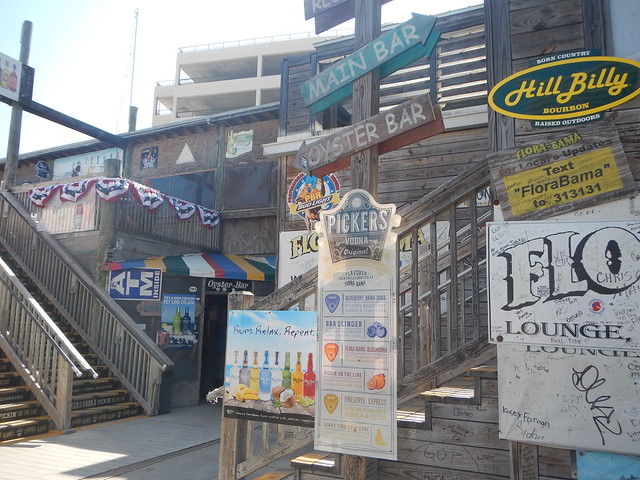 Later we went back to the condo, and with the kid walked down to our favorite beach bar, Florabama, right on the Alabama-Florida line. Quite a place this is, several different bars, inside and outside, we ate lunch and had a bushwhacker and headed back to the condo. Too many people. 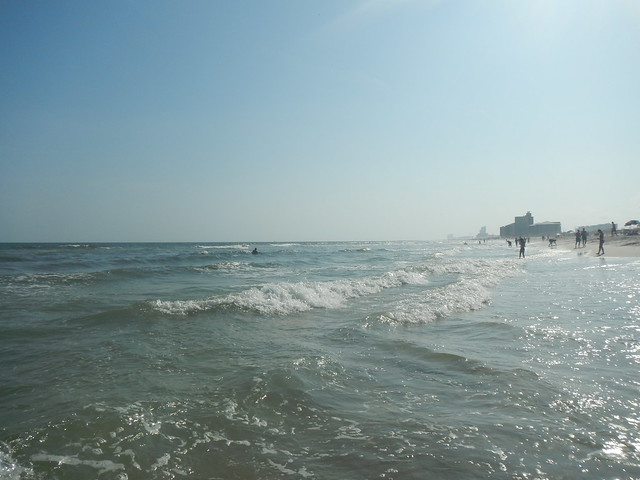 We got back and I took my little waterproof camera out in water. A wave happened by and knocked my prescription sunglasses off my face and into the water. I felt them hit my leg but I couldn’t find them. The way the current was going, they are probably washed up in Cuba by now. Oh well. 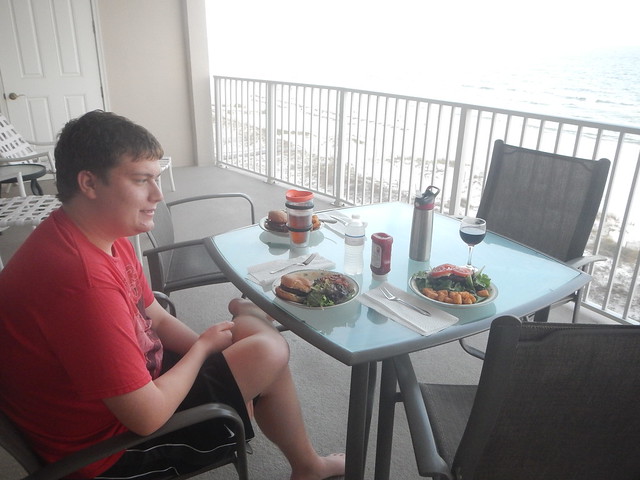 We grilled burgers, and had dinner al fresco on the balcony.

A good time is being had by all. Today, the kid and his mom are going parasailing. I’m going to get some clip on sunglasses from Walgreens, geocaching, and have a beer at the marina where the parasailing is, and read some. 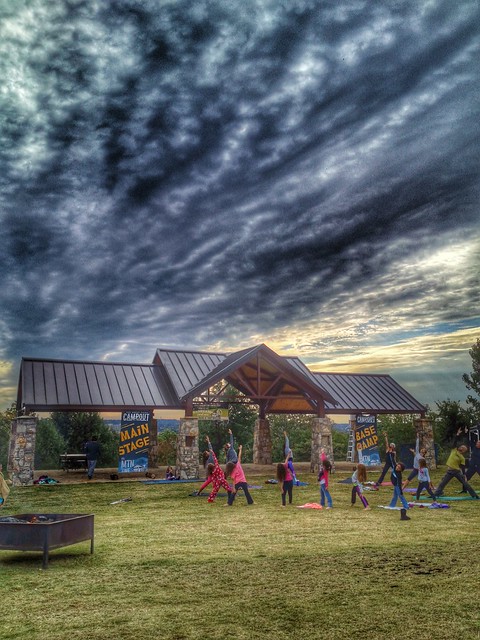 I participated in the Great Tulsa Camp Out on Tulsa’s Turkey Mountain this past weekend. In addition to a great night of music, campfires, a glow walk, and lots of fun, there was a Yoga Class on Sunday morning. As you can a few people took the class in their jammies. I had my snuggie with me but I didn’t want to be the guy that took things too far.

Now really, does Yoga get any better than this?

Have you ever done yoga in your jammies? Or your snuggie?