I went to the library Thursday to get a new book. “A Time for Mercy” by John Grisham. I’m only in it for a hundred pages or so but I love it so far. Amazing how on some books, even the ones I like, reading is slow and laborious and others one just flies through it.

While at the library I noticed the little symbolic sailboat was flying a pirate flag. Surprised nobody has said anything about it. The flag was flying the pirate flag so I took a video of it. I used the Hyperspektiv App on my iphone. I got lots and lots of photo and video apps and I use them quite a bit.

I took the superdogs Abby and Rascal (above ) to the pet groomer. Oh they hate it. Look at that look on Rascal’s face.

Here’s our Lizzy, the kitten. I know she is not a kitten any longer but that is what we call her and she hates being held but she loves being petted. I petted her when she was laying on the back of the sofa and she ended up crossways. Silly cat!!

Hey I know that I have gone on and on about my jury duty and the case and all that. The other side of the story was that we had really long lunch breaks and so I was eating good. Above is some brisket pho from a new place downtown. Talk about good, and hydrating.

Another day I went to an old favorite and had their prime rib sandwich and tabouli. Marvelous. We got paid $20 per day for duty so I pretty much ate it all up.

I’ve been flying my drone. Here’s an overhead shot of our back yard.

And another shot. Only 8 seconds long. If you watch to the end you get to see the bald spot on my head as I look down at the controls.

So that is pretty much it for what is going on with me.

We said goodbye to our sweet little dachsund mix Ginger today. She lived a long time and was well loved but she had multiple ailments.

She was always all-in when it came to family activities.

And she always had something to say about a lot of things.

And she put up with a lot!!

We miss you Ginger and will never forget you!! 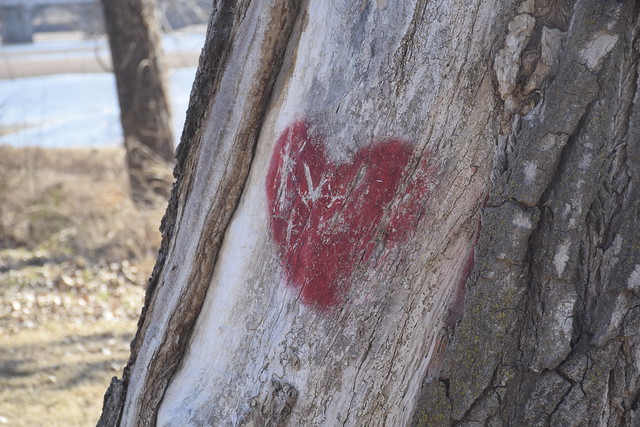 I found this Valentines Heart painted on a tree on Tulsa’s River Parks trail on Saturday afternoon while son and I were taking a walk in some very unseasonably nice, warm, and sunny weather. I hope that you are all ready for the big day. Cards, Candy, Wine, Jewelry, Dinner Reservations? Get your act together! 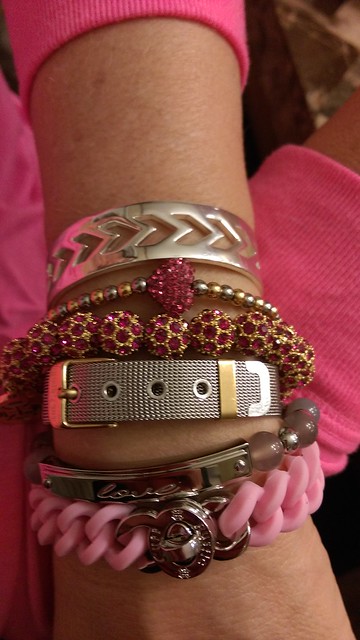 Speaking of Jewelry, Rustic Cuff is the big thing in Tulsa. They make very cool bracelets that can be combined in various combinations to form “stacks.” Rustic Cuff has quite a following including my wife who really enjoys her bracelets. The company is a local concern and it has been great watching the owner proceed from working the local craft shows to now four stores in Oklahoma and Texas. They make great reasonably priced gifts. 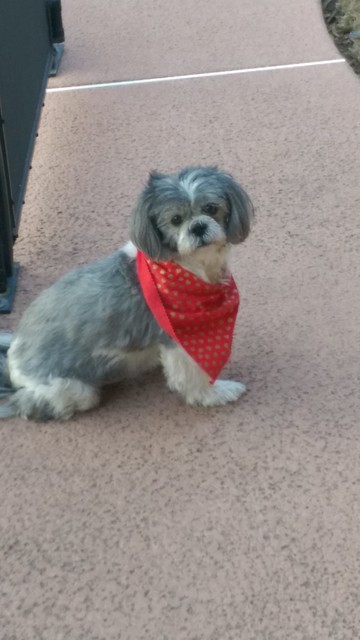 And this is one of my MIL’s dogs, Reba all outfitted in her Valentines scarf she got after a haircut.

Have a great Valentines Day!!

I’m linking with Ruby Tuesday Too 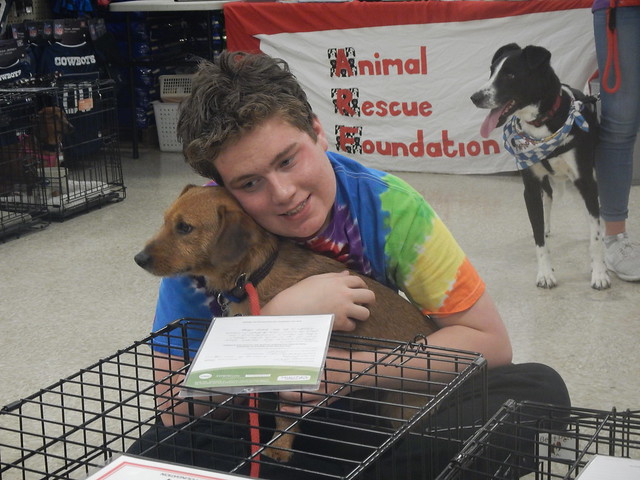 Son Logan’s school requires their kids to give back to their community via Community Service Hours. Logan has tried various things like the Food Bank and local libraries but he found something that he clicks with. 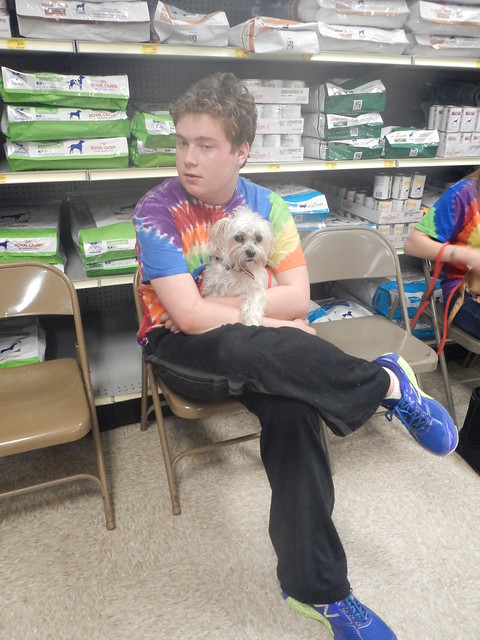 Tulsa’s Animal Rescue Foundation is a no kill shelter that puts dogs up for adoption. They bring a bunch of them to one of the Petsmart stores every Saturday from 9 to about 4. The need help of all kinds: setting up the tables and crates, helping people who want to look at the dogs and cats, and people to walk the dogs ever now and then to give them a break. 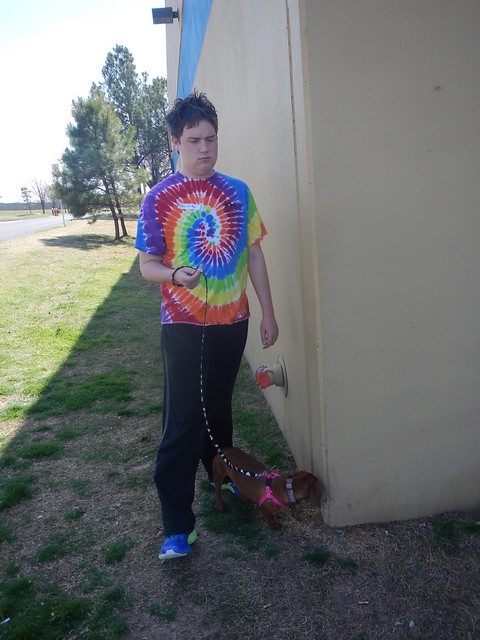 Logan is really liking this and is great watching him like it. He is a dog walking machine. They had about eighteen dogs last week and he walked every one of them, many of them twice during his shift. ARF has lots of teen volunteers and I am impressed with them. They pitch in and help where they can and they all love the dogs and cats. 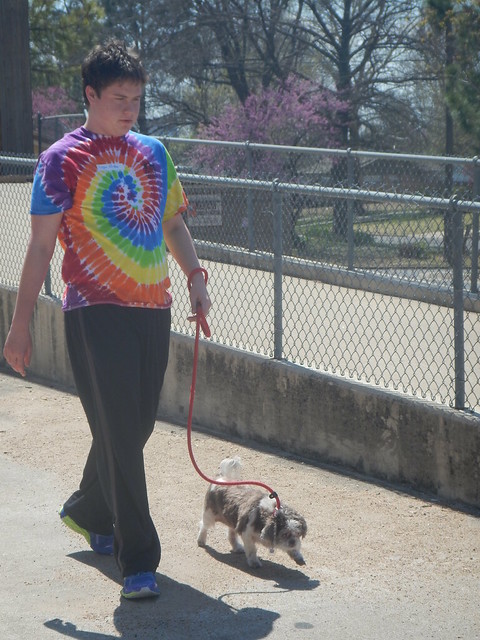 The dogs vary from old and slow to young and exuberant and Logan gives them all a good walk. Plus many of the dogs appreciate just being held for a little while. Being on display stresses them out.  By the end of the day the dogs are exhausted and are sleeping while waiting for their foster “parents” to come retrieve them. Almost all of the dogs are really good dogs who are victims of divorces or other life changes of their owners that are no fault of the pets. You can tell they are really confused about why they are not home. 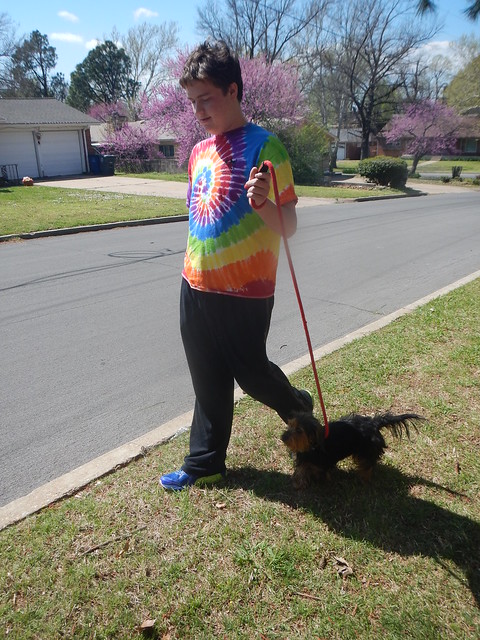 Anyways, if you live in Tulsa and you are looking for a dog check out the Animal Rescue Foundation. 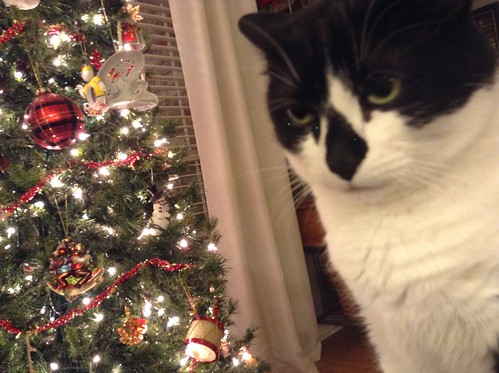 Here is LJ the Cat. This time of year if he is not sleeping in front of the fire he is striking poses next to the Christmas tree. Although the tree came down the other day so he is back at the fire place. 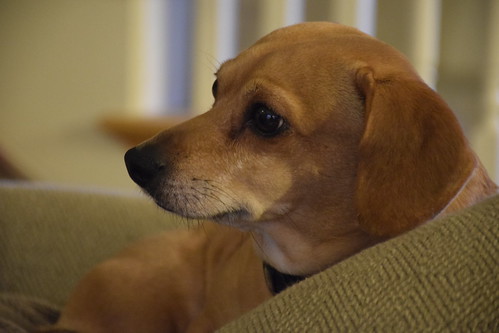 And Ginger our rescue dachsund mix (all of our pets are mutts). She freezes all winter. Winter to her here in Oklahoma is from September through May. 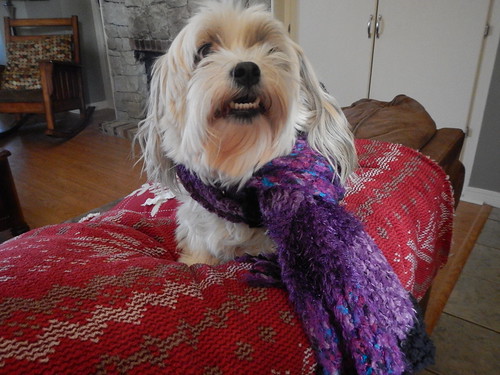 Andy Abby our fun loving dog. She is up for anything, scarves, hats, walks, adventure, she loves it all. 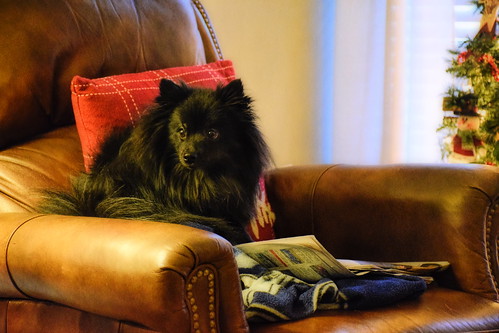 And this is Rascal. We didn’t adopt him, he showed up one day and adopted us. We tried really hard for about three hours to find his owner. He is kind of our baby, he is alert, watches everyone and everything,  and is in tune with us all the time and is probably the smartest dog we have ever had.

So those are our New Year’s Critters. 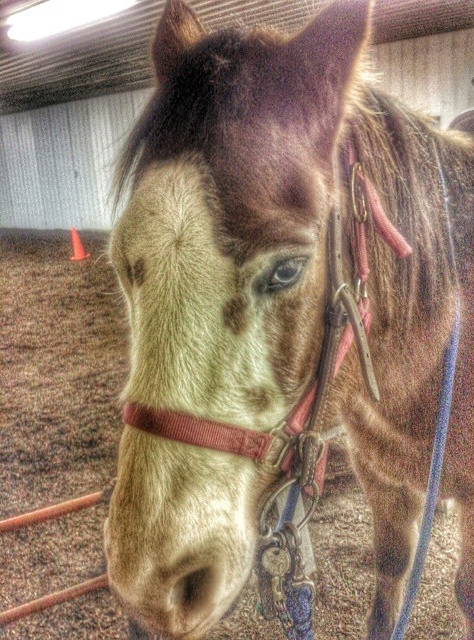 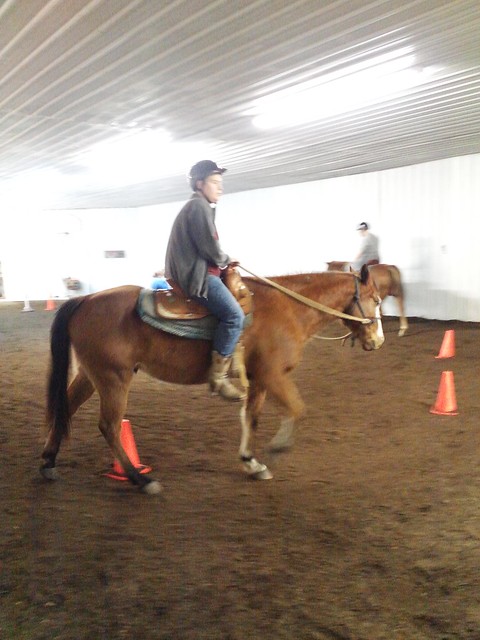 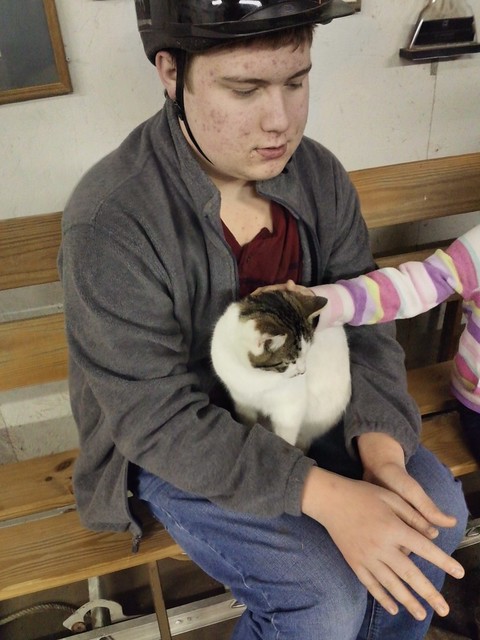 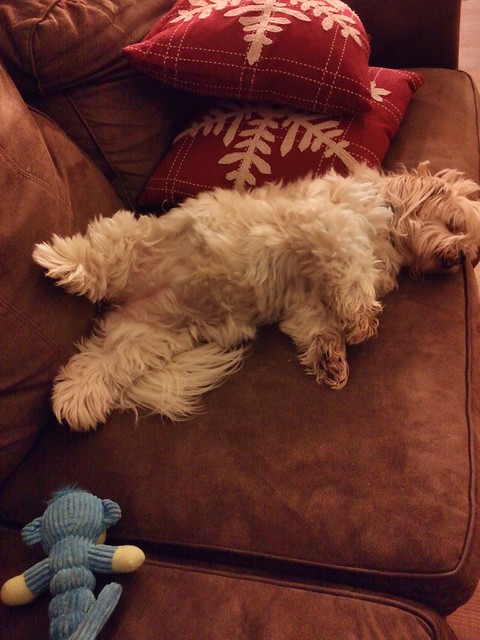 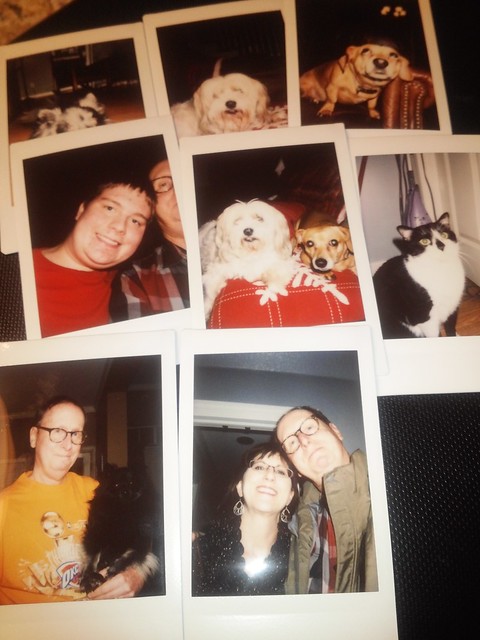 Abby our white Shih Tzu mix (all our dogs are basically ungrateful rescue dogs) was really rocking Heather’s purple scarf. Ironic as Abby is impervious to cold. She is ready to go out anytime and update her barkbook status with the neighbors. Ginger our Dachsund mix is only warm on one day all year long, July 4th, and shivers the rest of the year. She thinks she needs more than Heather’s scarf. Rascal our black Pomeranian mix wants something different besides my dull scarf.

Have you tried helping your dogs cope with winter cold with scarves. Our experiment didn’t work out well at all. 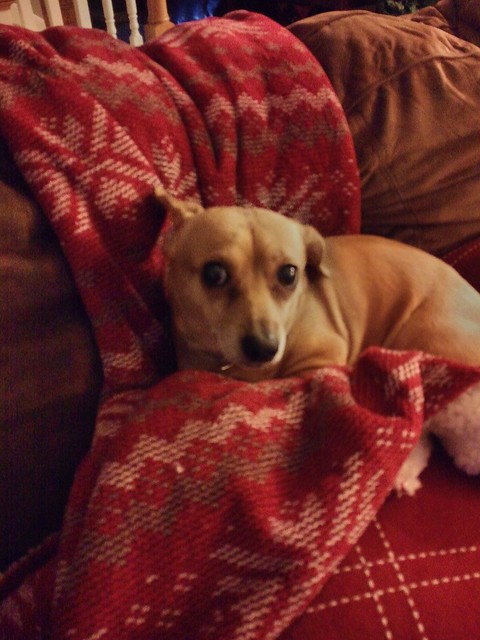 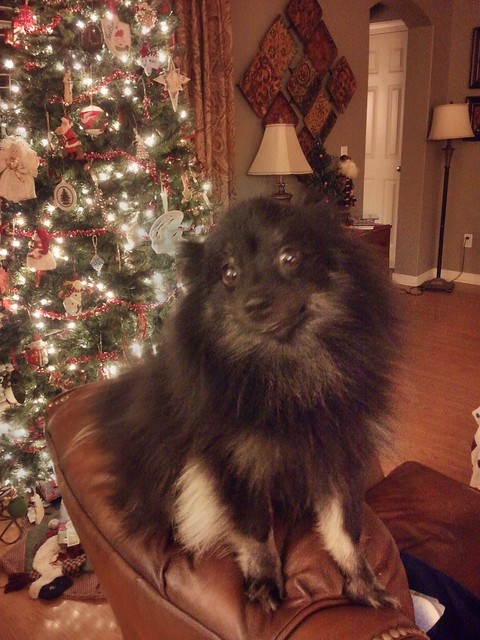 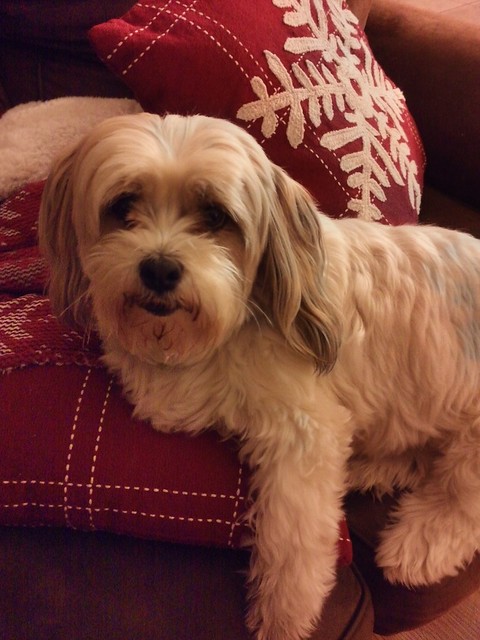 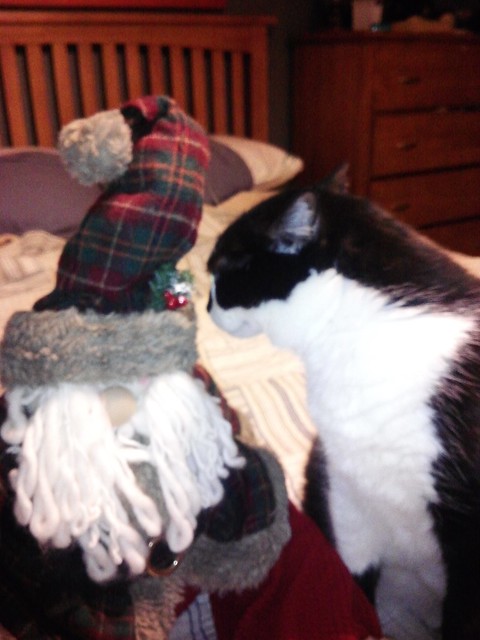