Early one morning last weekend I and along with several other members of the Tulsa Urban Wilderness Coalition met with some Tulsa County Park Officials at Chandler Park in west Tulsa.

They showed us an area that they have been reconstructing for some time. They are putting in a lot features and turning into much more than a place to have picnics. They have an event space, complete with substantial electric power capability and a pad that can handle food trucks, and area that can be used for big tents complete with tie-downs. It’s going to be great when they open it up to the public in a few months.

Then they took us on a hike on all three of their trails. Some of them still have some graffiti.

Other areas have been cleaned up with power washers. This area was used in the filming of the upcoming movie “Killers of the Flower Moon” and the movie people cleaned it up.

The “Lost City Trail” at Chandler is unique with all the rock walls, cliffs, and narrow passages. It is a hotspot of activity for the local climbing community.

It has several different overhangs.

They have a pond that they are finishing up. It’s pretty amazing all they are doing.

They are looking to partner with community organizations for events and other attractions. The energy and enthusiasm of the staff was cool.

Great things are fixing happen at the park. Do you want to get involved? Do you have some ideas? Check out the Tulsa Urban Wilderness Coalition and Tulsa County Parks Department.

I am linking with Skywatch Friday. Come check it out.

On a tour of Tulsa’s Chandler Park, the staff showed us the dynamite shack used way back when what is now Chandler Park was a rock quarry. I love stuff like this.

I’m linking with Shadow Shot Sunday 2. Go check it out!! 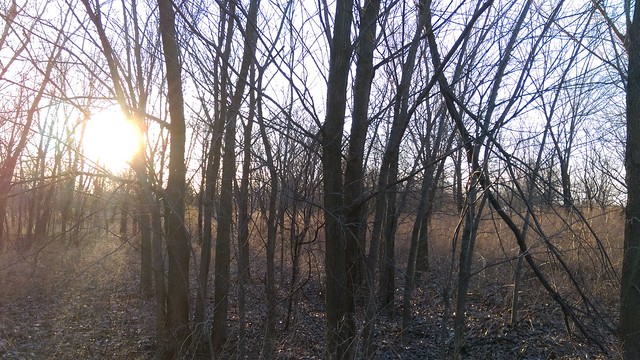 I think there used to be small farms in the area. There are remnants of old roads and residential power lines.

Wednesday night for a little change of pace I headed back to the wilds of Chandler Park. The privately owned, not posted land, west of the park in west Tulsa. Turkey Mountain gets kind of crowded this time of year. Not so at Chandler. 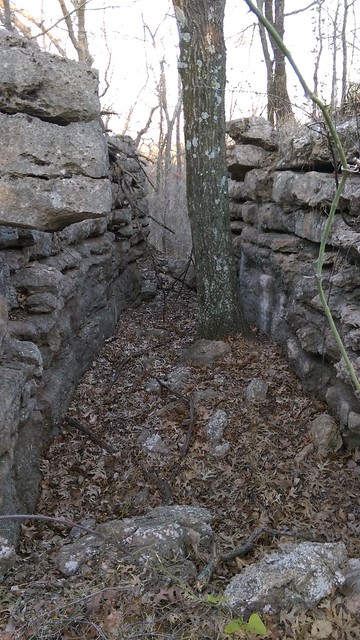 The area is up high on a hill and there are lots of natural rock formations. It looks almost like it was built that way. Many people call the area “the lost city.” I think it would be a great place to hide some geocaches. Plus if I were a snake I think this would be like a snake resort area.

Chandler has lots of trails but there are no armies of volunteers out picking up trash. The trails are utility rights of way and ATV trails. 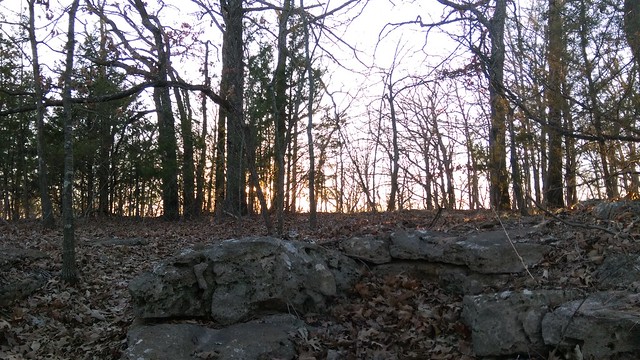 Sometimes I think I take too many photographs. Especially when I’m on an unfamiliar trail and the sun is going down. That is what I do though, take photographs.

It sure is nice though. I never see deer on Turkey Mountain any longer. I saw three Wednesday. I didn’t get photos of them though. 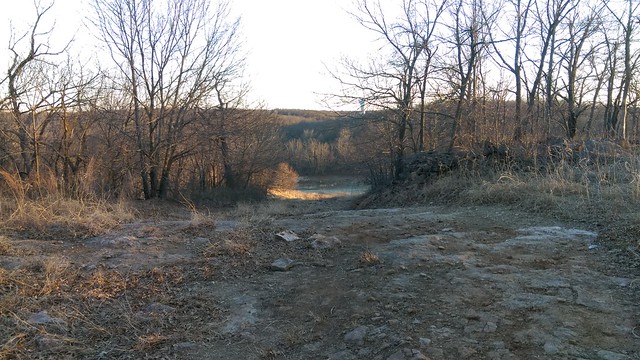 I’ve been down there before!! From the other direction. Connecting segments, learning the area.

The wilds are huge and a little intimidating. This is my third outing and I’m learning the area as I go. I am doing it by piecing together loops including new routes and old routes. So doing it after work is a little intimidating because I am just kind of guessing what turns to take. I would sure hate to be out here after dark on a trail I haven’t been on before. 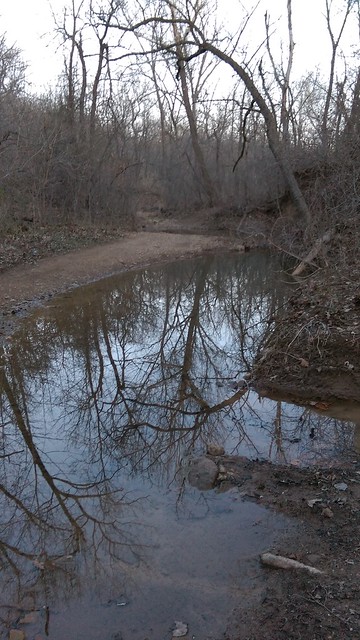 I’m a sucker for reflections of trees.

There are all sorts of creeks and sloughs with water that have to be navigated. 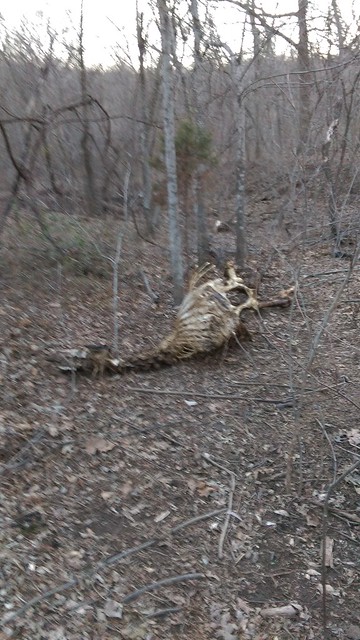 So what was it? A horse maybe? A mutant critter from the nearby Compass Point Landfill Superfund site?

And you see sights that you would never see on Turkey mountain. I am not sure what kind of critter this is but he has been picked clean. 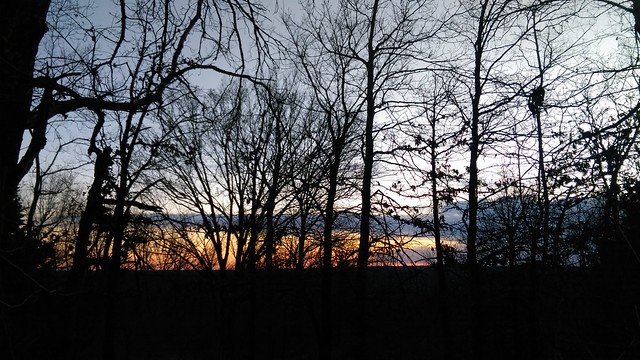 Getting dark and I’m a ways from the car, but hey, lets take another photo, and another, and one more.

Finally when it got dark I found that I had guessed right and got on a trail I had been on before. A successful loop guess! 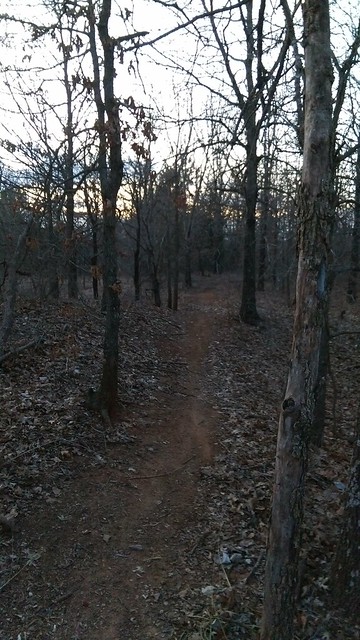 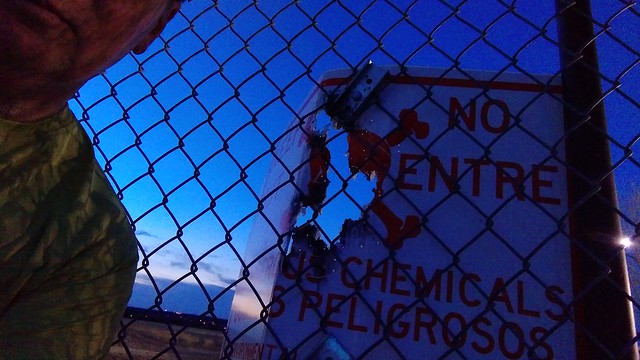 I headed back to my car and passed Tulsa’s world class superfund site. The long forgotten Compass Point Landfill. An area where way back when the owners let everybody pretty much dump anything they wanted into a former rock quarry. Refinery wastes, tires, chemicals. Just chuck it in and don’t worry about it. 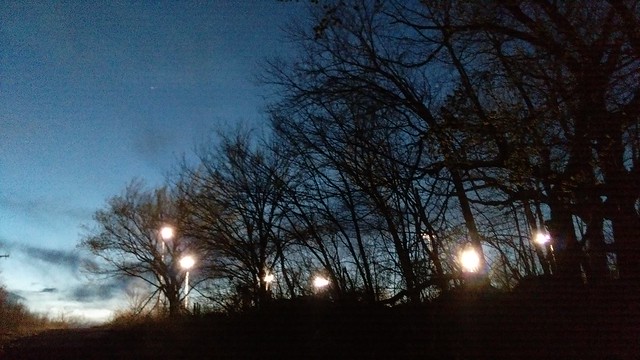 I got back to the ball fields at Chandler Park. They weren’t playing baseball, there was a group of people working with their dogs. 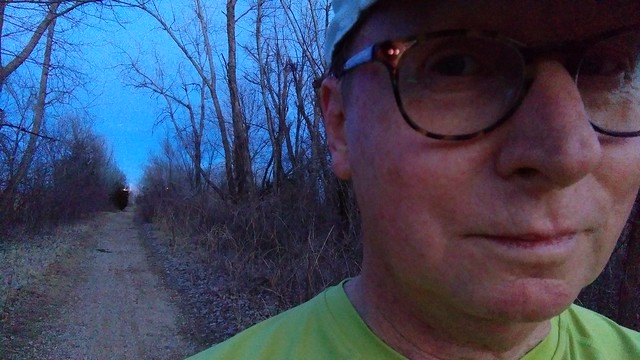 Miller time!! Or Hoptometrest Double IPA time. After I get home of course.

Anyways, I was one happy camper. Learning Chandler Park bit by bit.

Are you learning anything new? 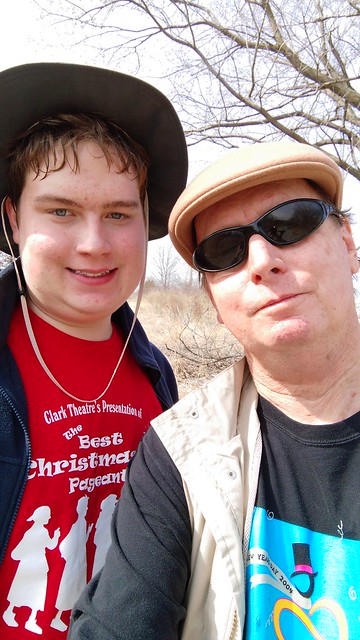 Sunday I decided to explore a new area with Logan. It is the land west west of Chandler Park is far northwest Tulsa. I was inspired by the facebook posts of TrailZombie Ken who is my guide pretty much for anything having to do with trails and trailrunning in Oklahoma. 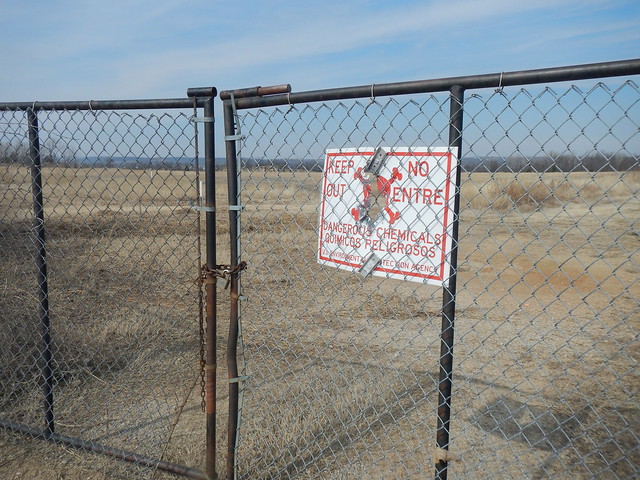 We start out at the very southwest end of Chandler Park and cross the gate and head down the road. The first thing you run into is this sign. This is the Compass Industries Landfill EPA Superfund Site. A gazillion dollars was spent cleaning up “…620,000 cubic yards of solid, liquid and sludge wastes, including acids, caustics, solvents and potentially carcinogenic materials” in a former limestone quarry.  The cleanup was paid for by the polluters themselves but all that stopped in 1995 and now we taxpayers get to pay for cleanups. I guess because it is unfair to ask the polluters to pay the expenses. It might cut into their campaign contributions budget or something. 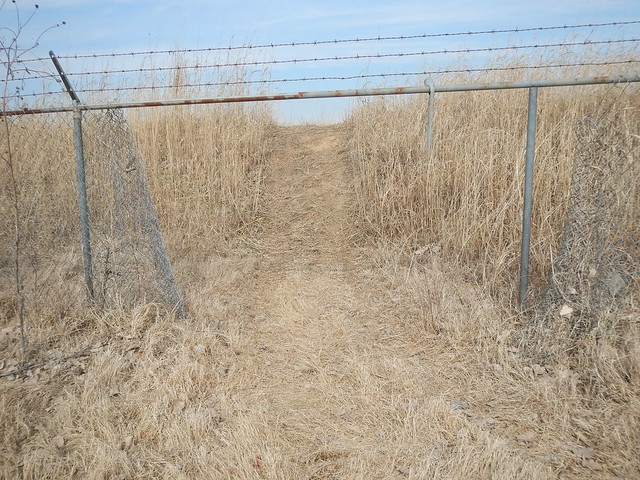 We go a little further and we find the that the fence has been breached in a major way. I wonder what kind of morons trespass out there on a regular basis? 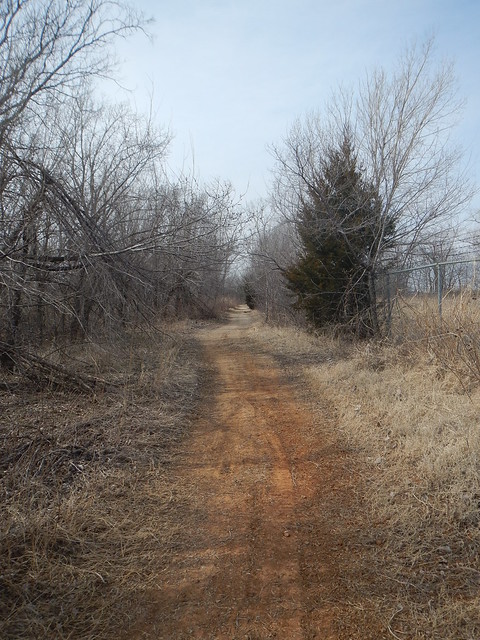 Shortly thereafter the trail gets away from the site and continues on west. We only saw one other person during our outing. Turkey Mountain is great but on nice weekends some of the main trails get crowded and Logan doesn’t like the constant bikers coming up behind us. No traffic problems at Chandler Park, yet. 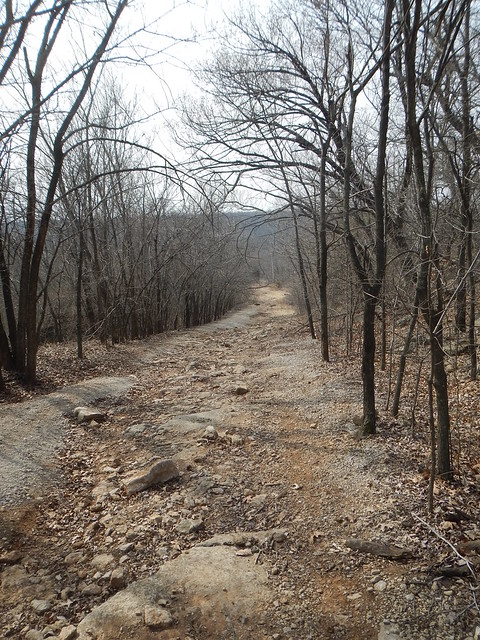 And then it got a little rocky and I spent 40 fruitless minutes looking for a geocache and we continued our trek until the trail looped around to Avery drive. 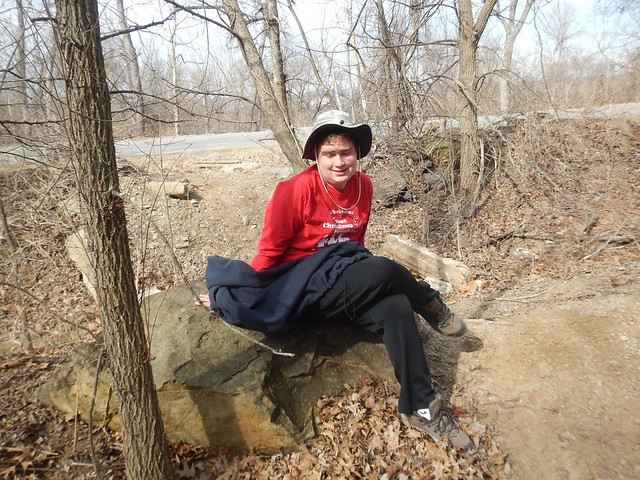 We took a little break and then decided to head back on a different route. 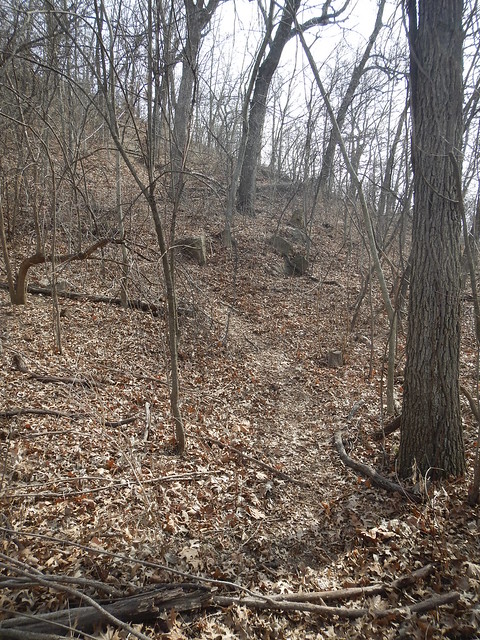 If it looks steep, it is. 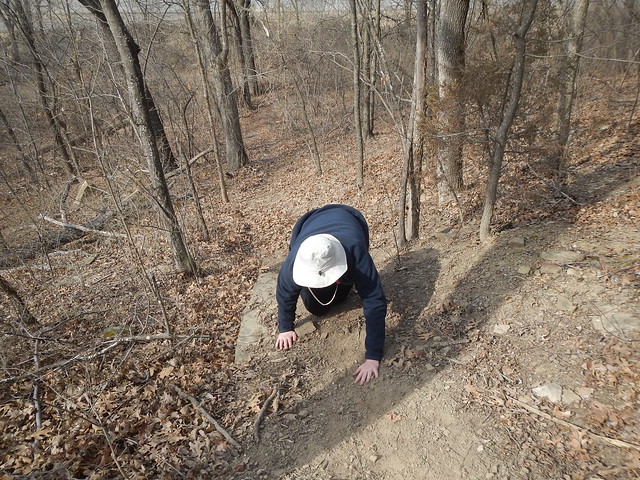 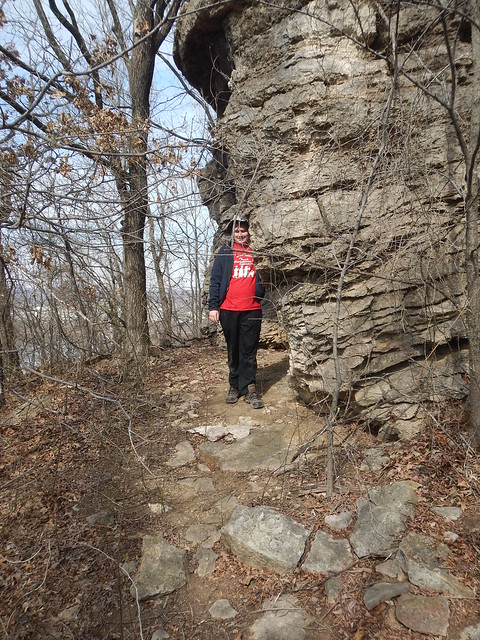 We got into some of rock formations that make Chandler popular with the local bouldering and climbing enthusiasts. We are not into any of that. 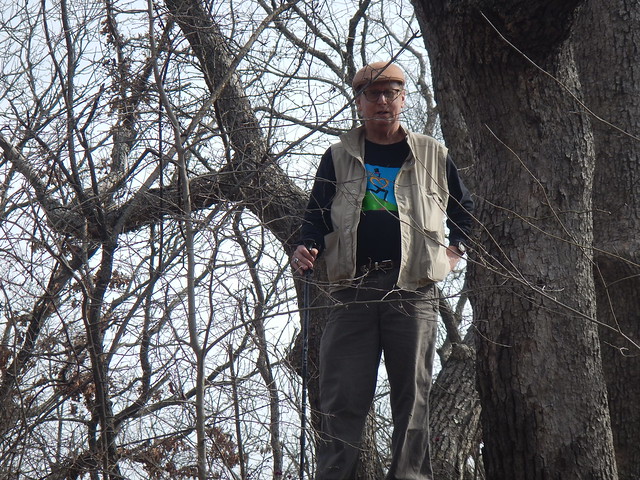 Logan took a picture of the old man in full nerd regalia standing on a rock.

So it was a nice easy out and back introduction. I can see when daylight savings time returns that I’ll be coming out here some to do my Wednesday night runs. The area is lots bigger than Turkey Mountain but literally about 1% as many people. I’ll be learning the trails and looking forward to it.

Timely column today in the Tulsa World: Do we even need Chandler Park? I say yes!!

Have you been anywhere new lately?