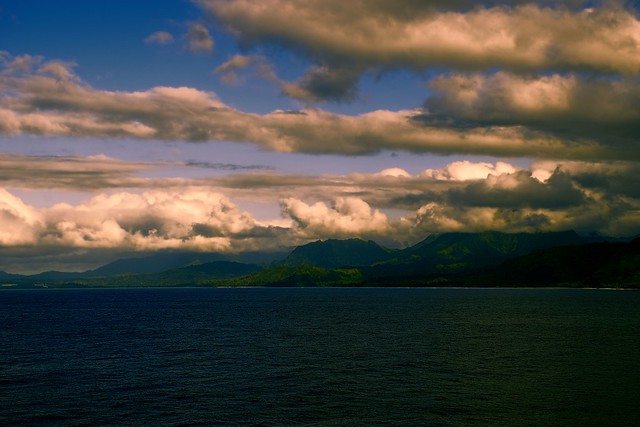 I haven’t been taking very many decent sky pictures here in Oklahoma lately. It is either bright blue skies or rainy or overcast so I’ve gone back to the archives to our trip to Hawaii last summer. Talk about breathtakingly beautiful scenery everywhere you look. I think this was the island of Kauai. I’m terrible about documenting my photos, just terrible.

The weather has turned pretty nippy here. I have to tell you that Tulsa is as far north as what I want to live.  The Gulf Coast is beckoning me right now, something fierce. I hate being cold!!

How about you? Are you happy where you are or wish you somewhere else? When I put it like that, I’m like, yes I’m happy right where I am at. Plus if I moved I would just find something else to complain about.

So I guess I’ll stay a while.

Check  out my friends at Skywatch Friday 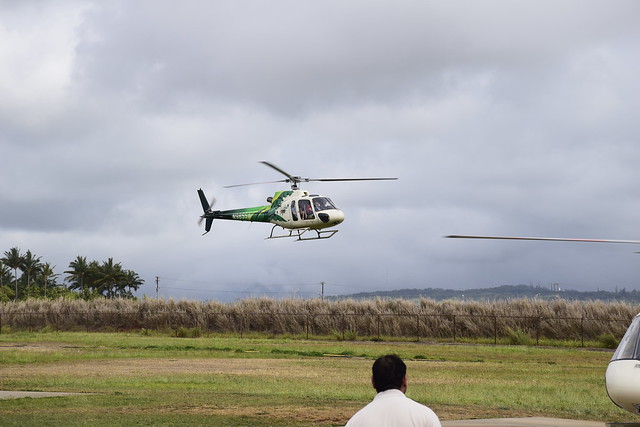 A definite highlight of our Hawaiian cruise earlier this summer was out Helicopter tour of Kauai. It was a birthday gift to son Logan from his grandmother, Nana. Heather and I globbed onto it also. We were all thrilled. 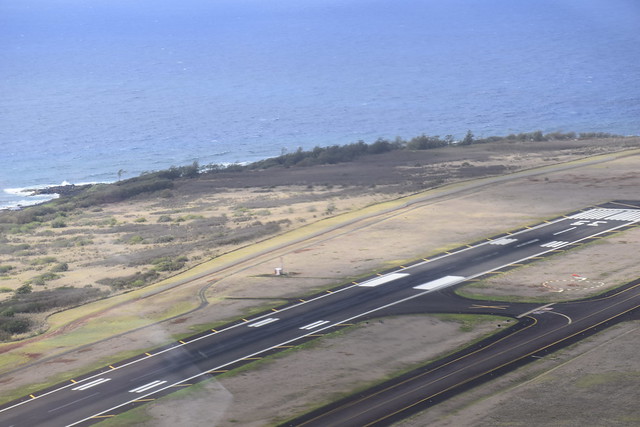 We took off on a Safari Helicopters aircraft with Brian at the controls. I was glad that he didn’t let Logan fly the thing. 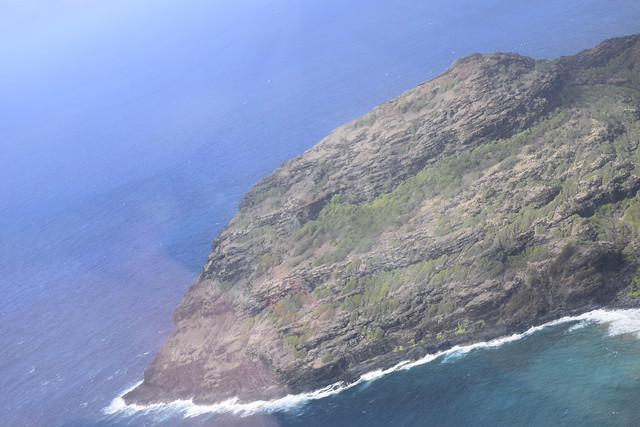 We headed over the ship and and then back into the island giving us a running commentary on all that we saw. Sorry I wasn’t taking notes but he was very informative. 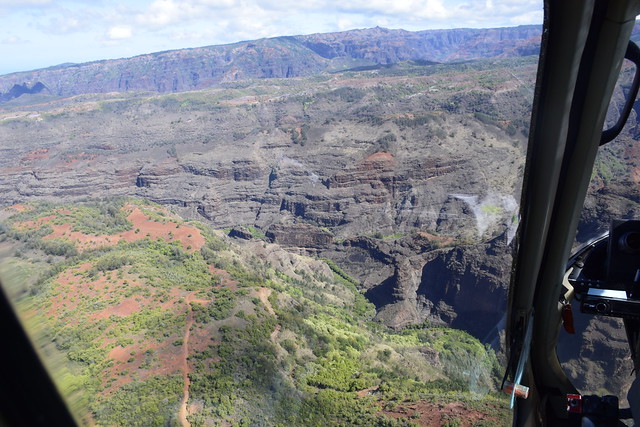 We saw some very deep canyons. This may be Waimea Canyon, the so called Grand Canyon of the Pacific and now a state park. 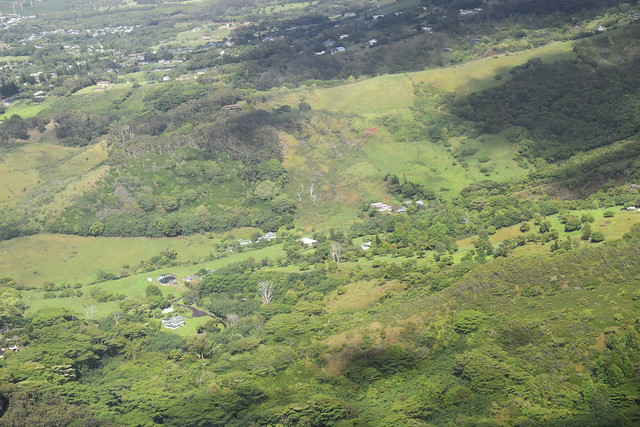 We saw lots of beautiful land. Our pilot, Brian listed off some of the celebrity landowners who are buying up the old ranches of Kauai. Michael Case of AOL online for instance owns 39,000 acres via various entities. Facebook gazillionaire Mark Zuckerberg paid over $100 million for just 700 acres.  I think he got taken personally. $100 million for just over a square mile?  I’m glad for the landowner that he bought it from. 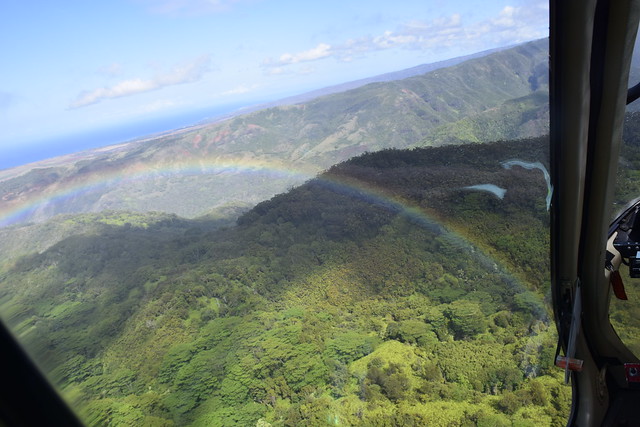 Oh well, back to the friendly skies. I’ve posted this rainbow before. Again a very beautiful flight. 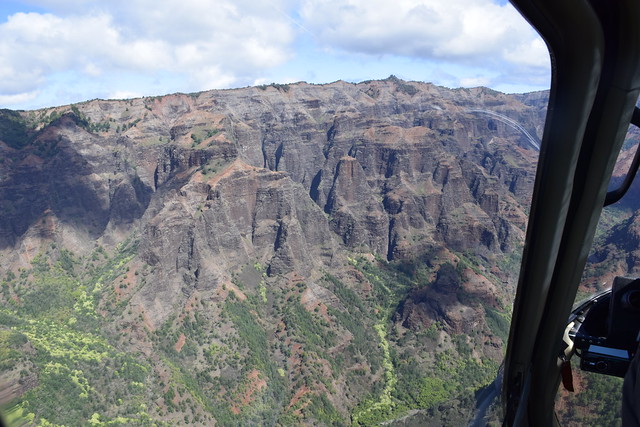 I was amazed at the up and down topograpy and all the water and how green everything is. Kauai is called the Garden Island for a reason I found out. 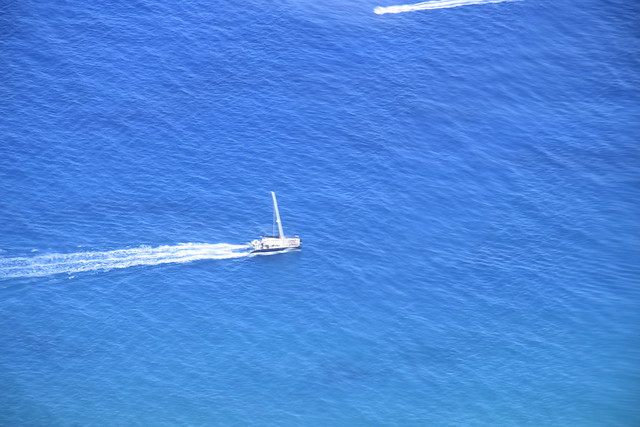 And then out over the north shore where we spotted this boat motoring along in some beautiful water. 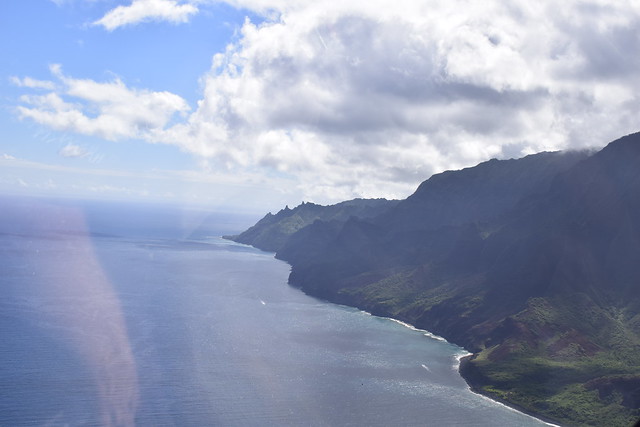 And then along the beautiful Na Pali coast which is simply breathtaking. Brian talked about his plans to hike along the coast with some friends about about seven miles and camping. It sounded like a plan to me but he didn’t extend any invites. 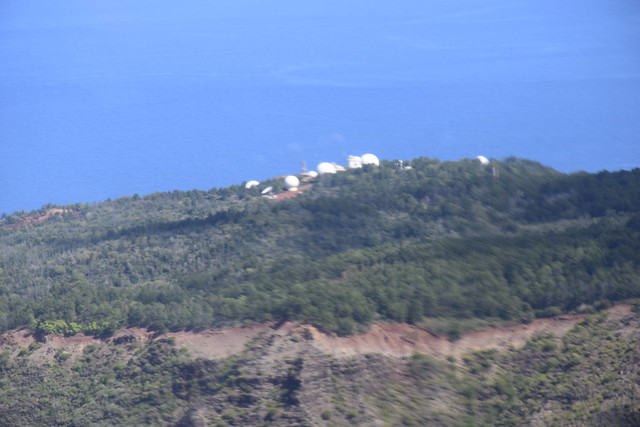 I have no idea what this is. Sorry for the fuzzy photograph. It sure looks official. 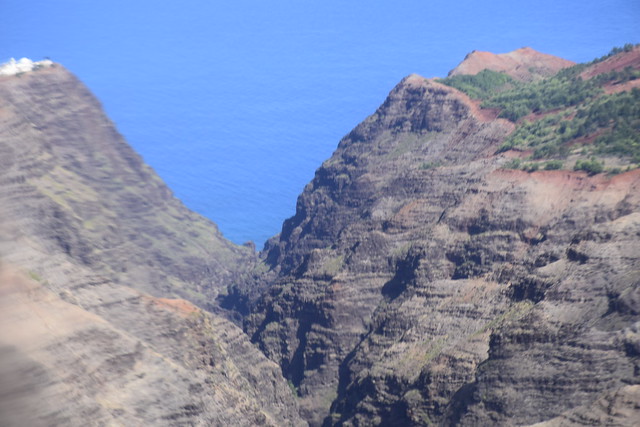 Another fuzzy pic of a view through a canyon to the Pacific Ocean. 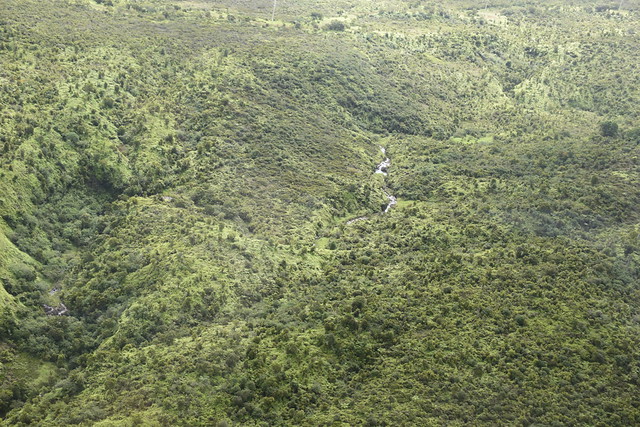 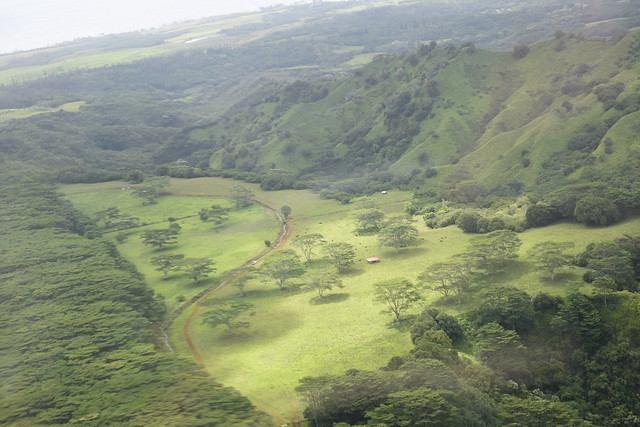 It was all so beautiful but it came to an end. 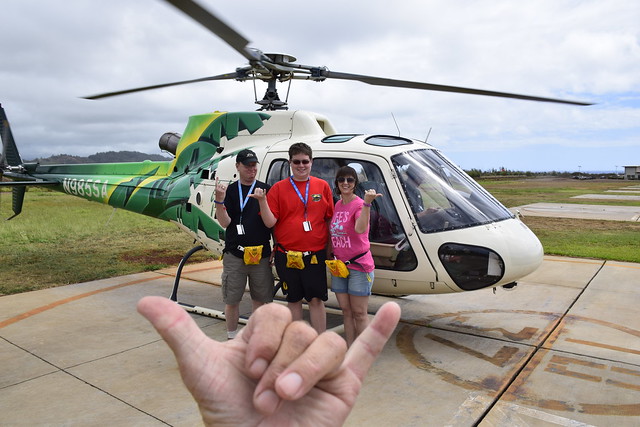 We bailed out and Sherrel the Safari Helicopter Rep took our pics. It was a great trip. 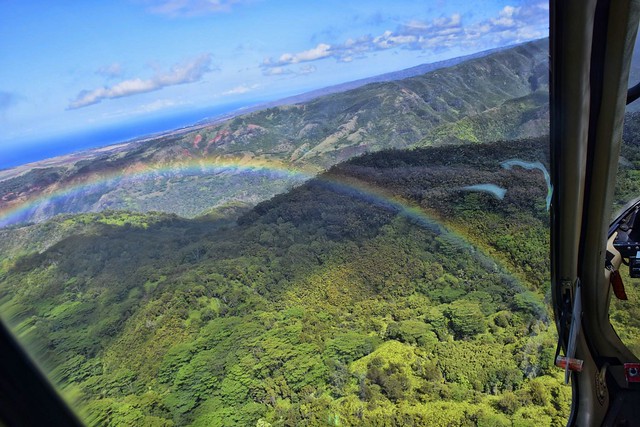 A definite highlight of our vacation to Hawaii was helicopter tour that Logan’s Grandmother and my MIL gifted him for his birthday. It was great and I’m going to post about it in more depth in the future. For now, I’m posting this rainbow. I’m not sure exactly where we were on Kauai when this rainbow appeared but the island is home to Mount Waialeale which at an average rainfall of 452 inches per year is called the wettest place on earth. So it is probably a good place to see rainbows.

All I know is that the Kauai is beautiful and magical. 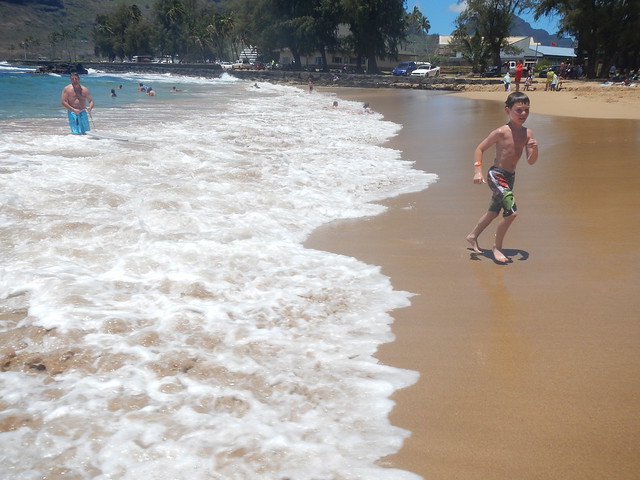 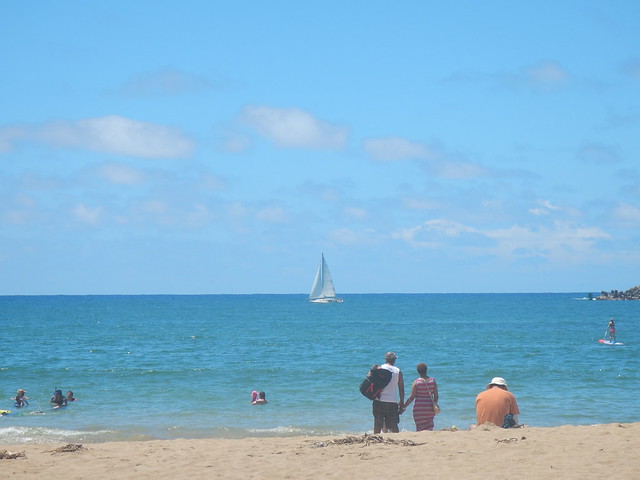 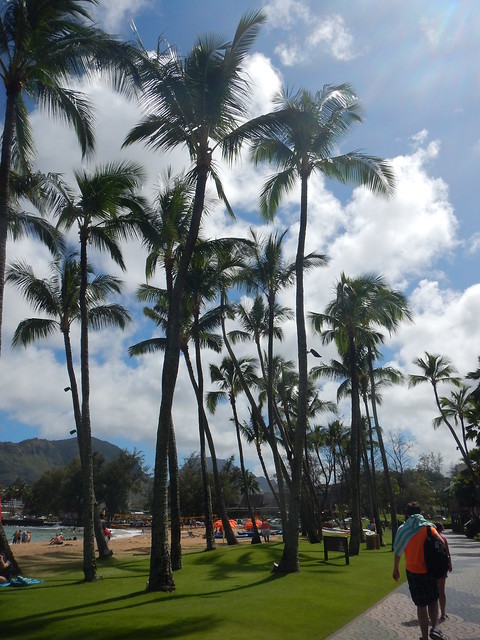 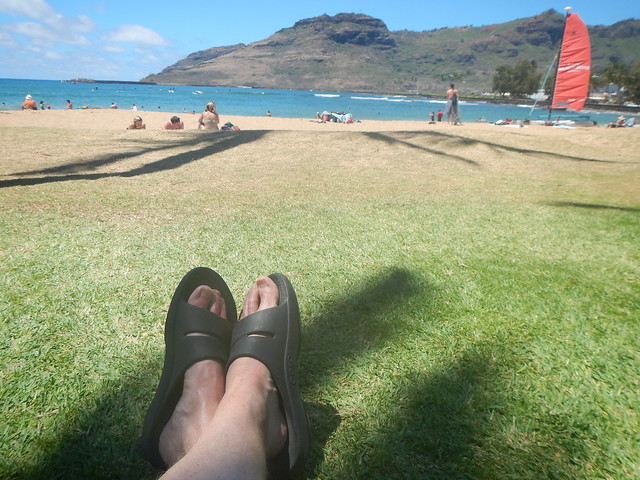