I’m addicted to Instagram. I like creating and uploading pictures and I like looking at photographs of the people I follow. It is crazy the number of photos out there. Every once in a while a company will repost a picture of mine. (After asking permission of course.) That is great because they typically have a lot more followers than I do and the pics get more recognition. Below are two such examples. 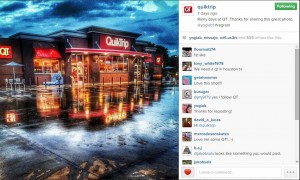 Quik Trip is a Tulsa based convenience store chain that IMHO beats the crap out of any other convenience store I have ever seen. One rainy morning I was filling my car with gas and thought that the store with the wet parking lot and ominous clouds might make a decent pic. It did and I got a few dozen “likes” (Likes are like crack to us Instagram addicts). Quik Trip asked permission a couple months later to repost it and it got a pretty good response. 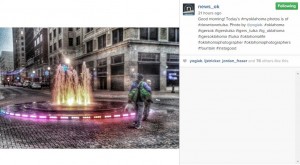 This pic is kind of grainy. I was downtown yesterday morning and noticed that the colored drunk-driver-proof fountain and the blue Christmas lights make a decent pic. So I went up there and tried to get an interesting pic somehow. These guys came walking by headed off I think to the Iron Gate ministry to get some breakfast and I took a pic of them walking by the fountain and then cropped it close. (That is why it is so grainy.  NewsOK, the online arm of the Daily Oklahoman reposted the pic

I have about two thousand pics on Instagram, some good, many bad, and a whole bunch in the muddling middle. I find it a lot of fun.

This past weekend was a long one. I get every other Friday off. First things first though, I got a dental checkup. I snapped this pic and posted on Instagram. Turns out one of my Instagram friends, whom I have never met, goes to the same dentist.

Instagram blows my mind. On Facebook I at least know most of my “friends” at least a little bit. I have 200 or so Instagram friends and know most of them only by their photographs. It blows my mind sometimes this networks we build. Does this modern way of networking blow your mind also. 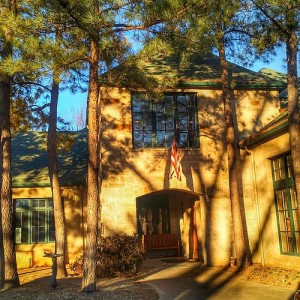 Afterwards Heather and I met up and went to see “Her” a very clever but disturbing movie about a guy that falls in love with his computer’s operating system. Seriously. Good flick though. But it is not the movie the trailers lead you to believe it is. 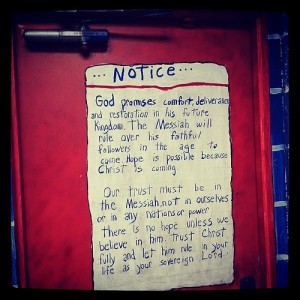 Later on we picked the kid up at school and took him to his barber. It is a kids paradise. They can play video games while they wait and watch movies while getting their hair cut. Plus, there the walls and plastered with messages like the above. I can’t figure out though if the messages are reminders for the barber or for his customers, or the customer’s parents. 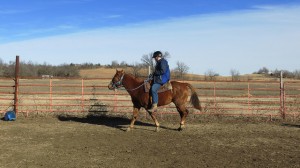 Saturday morning I took Logan up to All Star Therapy for his weekly ride. The weather was nice enough that we went outside. . 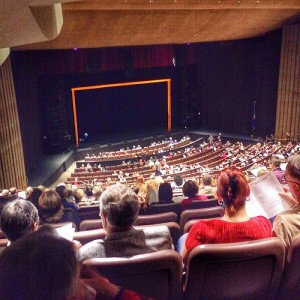 Sunday afternoon we went to see the touring broadway show Chicago at the Performing Arts Center. I don’t know what it was, but I was just “meh” about it. Maybe it was the lady sitting next to me. She chomped on her gum the whole first half of the performance. Plus I could smell the flavoring of the gum. Yuck.

But hey, we are watching the Grammy Awards as I write this. The creativity and dynamism of the performances blow me away. Pink especially, she sang her song “Try” while doing some sort of trapeze act with ropes. It was amazing and I don’t think she was lip synching.

So, how was your weekend?

I was in Oklahoma City late last month at a conference. I took a few pics of the Christmas Lights on Automobile Alley. The area also has several great old school neon signs. 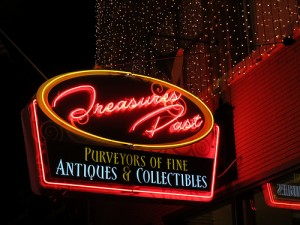 Not only old school signs but old school businesses. Nice to see an urban restoration without Old Navy or Kohls. 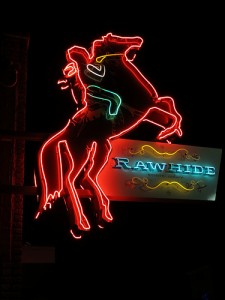 This is my favorite. I love the big long looping glass coils that make up the image. 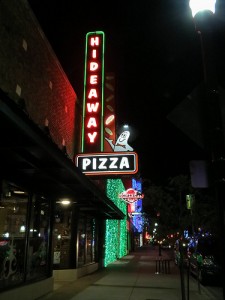 This probably isn’t really neon, but what the heck it is a great regional chain and the pizza is wonderful. I recommend the barbecue chicken pizza. It’s delish. They also have a great gluten free crust available.

Have you seen any good signs lately? Do you have a good pizza joint? I’m needing to know stuff like that?

Hey also, any instagrammers out there? Have you cancelled your account yet? I sure have. I think this may go down as a MBA case study on how to destroy a business one day. Or maybe they’ll back off a little and this will all blow over. Any good alternatives out there? I’m suffering mightily from Instagram withdrawal. Don’t judge me if I go crawling back! I am not worried about the privacy concerns. I mean if you want things to be private don’t be uploading  it to the internet, right, duh. I’m concerned on how they are going to use my poorly lit, out of focus, photos of my new shoes.

I have a new obsession recently. 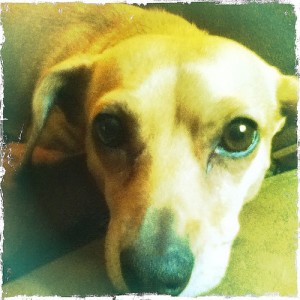 No, its not the dog, although I love her. I bought a new Ipod Touch recently. It has a camera similar to the one in the Iphone. It’s a pretty nice camera but I also got an app, Hippstamatic where one can simulate all sorts of cameras including old film cameras like my film Lomography cameras. 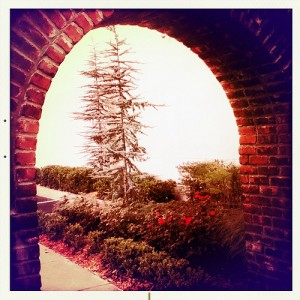 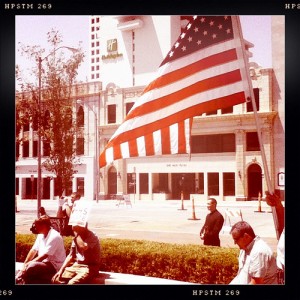 No hurt feelings by insulting your favorite cheesy politician or cause. Just photos. 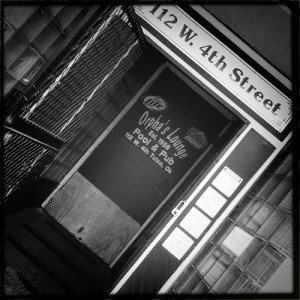 So I’ve been going crazy with my trio of brand new toys.

The Ipod is small and compact so its easier to get more candid photographs than I could with my regular cameras. 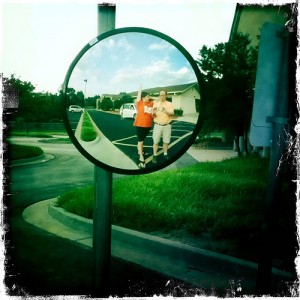 Don’t worry, they are just one more tool in my bag. I still love my big Canon SuperZoom, and my little Powershot, as wells as my Lomography cameras, and my special effects digital camera and all the rest. I haven’t gotten off the deep end yet, but I may be headed there. 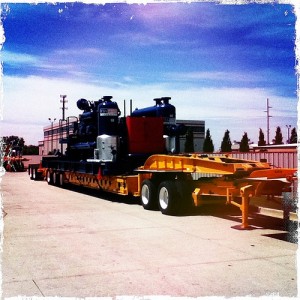 Do you have anything you want to show and tell about today?